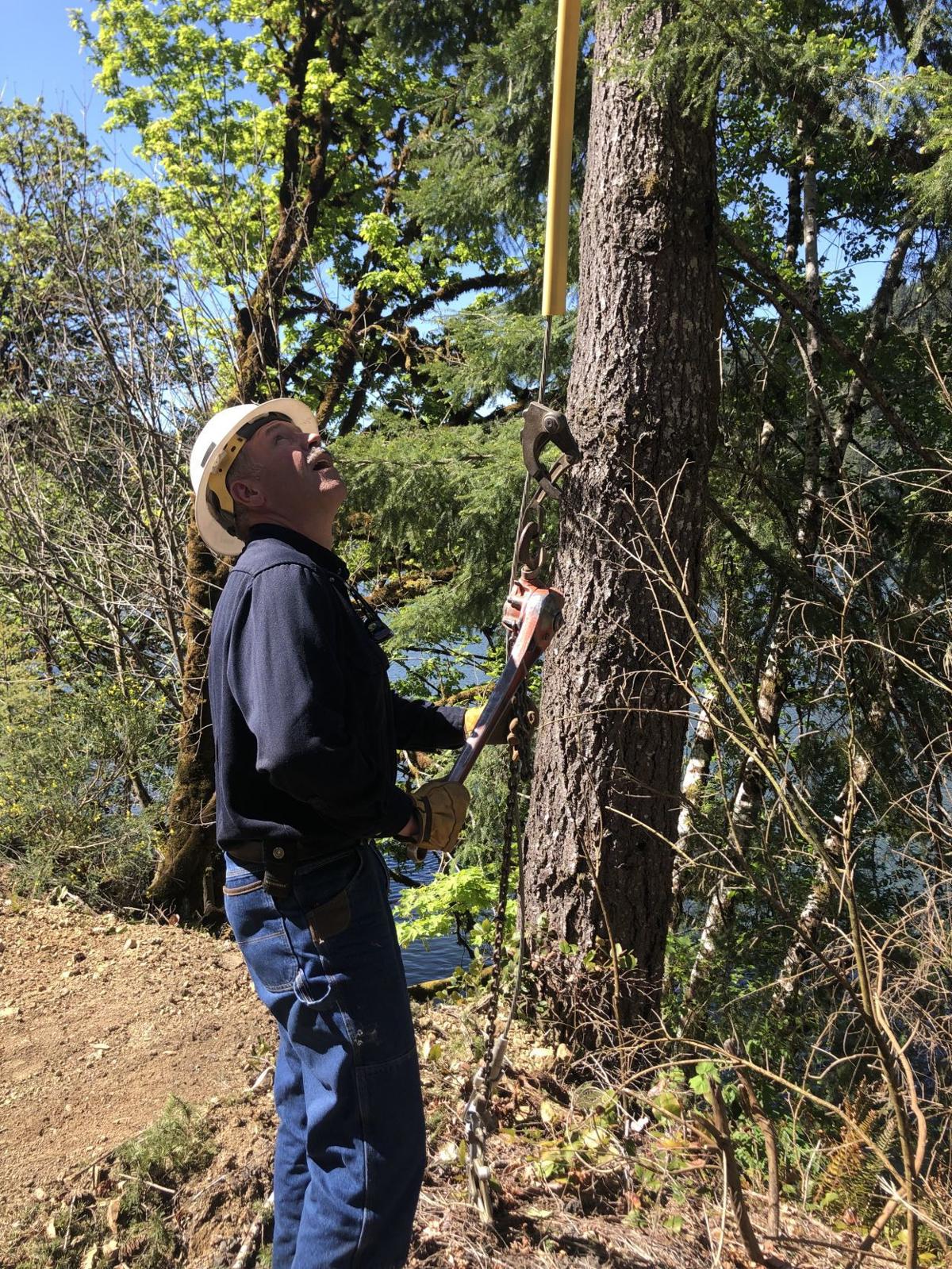 Curt Woodyard, with Douglas Electric Cooperative, looks at areas of work done along the way to Loon Lake. 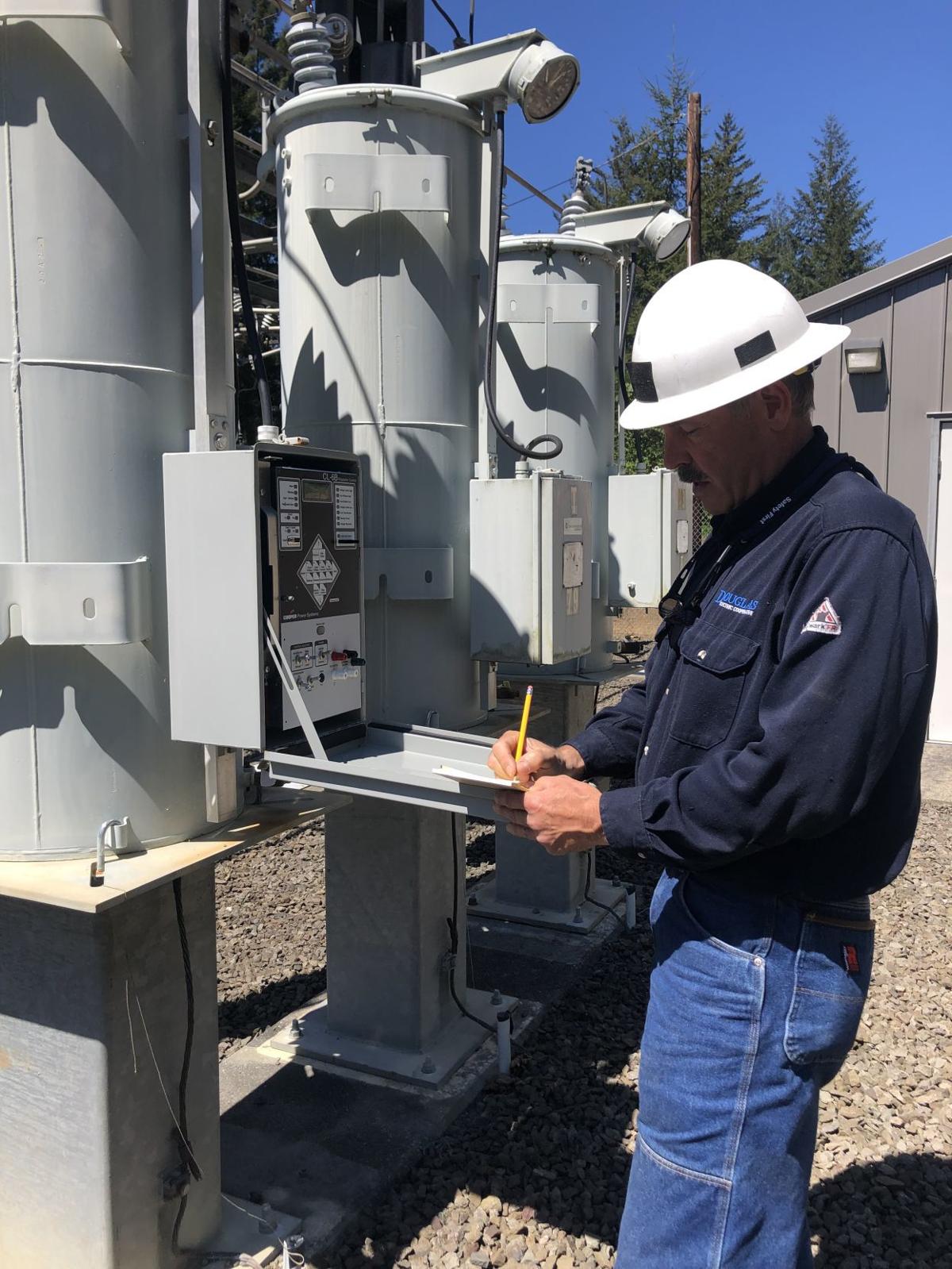 Curt Woodyard check the equipment at the Scottsburg substation.

REEDSPORT -- Before the chilly morning air has given way to the heat of the day, Curt Woodyard hops in his work truck and heads off on Highway 38.

He stops along Scholfield Road, Loon Lake and at the Scottsburg substation to check the power lines more than a month after power was restored to all the areas impacted by massive outages in February and March.

If the power goes out on North Tenmile Lake, which it did last Monday, it’s Woodyard who is up at midnight to repair it.

Curt Woodyard check the equipment at the Scottsburg substation.

The district foreman for Douglas Electric Cooperative’s Reedsport outpost sports a salt and pepper mustache and a wide grin. He loves to talk and working in the area for the last 15 years has given him plenty of stories to tell.

Like the tale of some of the worst damage he’s seen caused by winter snowstorms.

He said he worked 18 hour days for 27 days straight this winter trying to get the power back up and running to Douglas County’s most rural residents.

Woodyard said after a week, “You get to a point where you just don’t need the sleep.”

Loon Lake was without power for the longest — 26 days.

From the turn onto Loon Lake Road to the Bureau of Land Management Loon Lake Recreation Site, 104 power poles went down. Those all had to be replaced.

“Every one of those poles here tipped over and the line broke,” Woodyard said.

Douglas County is still working to clean up areas of Loon Lake Road.

For many, this large storm was just a taste of what a Cascadia subduction zone event could’ve been like.

“This was kind of a precursor (to Cascadia),” Woodyard said. “Just imagine if the roads weren’t there.”

The night the storm began, Sunday, Feb. 24, Woodyard drove to Drain, which feeds Elkton’s electricity, when the power went out.

“Trees were falling and it was dark and I said ‘let’s pull out and wait until light,’” he recalled.

That Monday he started driving back toward the coast at 7 a.m., by 4 p.m. he and two others had made it to Elkton.

Woodyard said he didn’t make it back to Reedsport until Tuesday, having to chainsaw his way out along the roads.

From that point, it was a matter of restoring power incrementally.

He worked from Reedsport inland with crews from Central Lincoln Peoples Utility District, while crew members from Douglas Electric’s main office in Roseburg worked their way toward the coast.

“We have a lot of stuff that’s very inaccessible,” Woodyard said.

Some areas along the Umpqua River require a crew to take a boat across to replace a power pole. They do this by hand; digging a more than 6-foot-deep hole with “the spoon and the spade.”

The company had recently updated power lines in both Elkton and Loon Lake before the storm hit.

Woodyard said, “It was a lot of capital that took some really big hits that already took a lot of money to update those lines.

“We have to come up with that money, we can’t say ‘oh well wait until FEMA.”

The state forwarded the reimbursement request to FEMA, and President Donald Trump approved the federal funding assistance on May 2.

“Federal funding is available to State, tribal, and eligible local governments and certain private nonprofit organizations on a cost-sharing basis for emergency work and the repair or replacement of facilities damaged by the severe winter storms, flooding, landslides, and mudslides in the counties of Coos, Curry, Douglas, Jefferson, and Lane,” a White House press release stated.

In Lane County, local public agencies reported more than $17 million in damage from the snowstorms, The Register-Guard reported.

COOS BAY — Bryce Grotzke is running for Position 7 on the Coos Bay School Board as a way to give back.