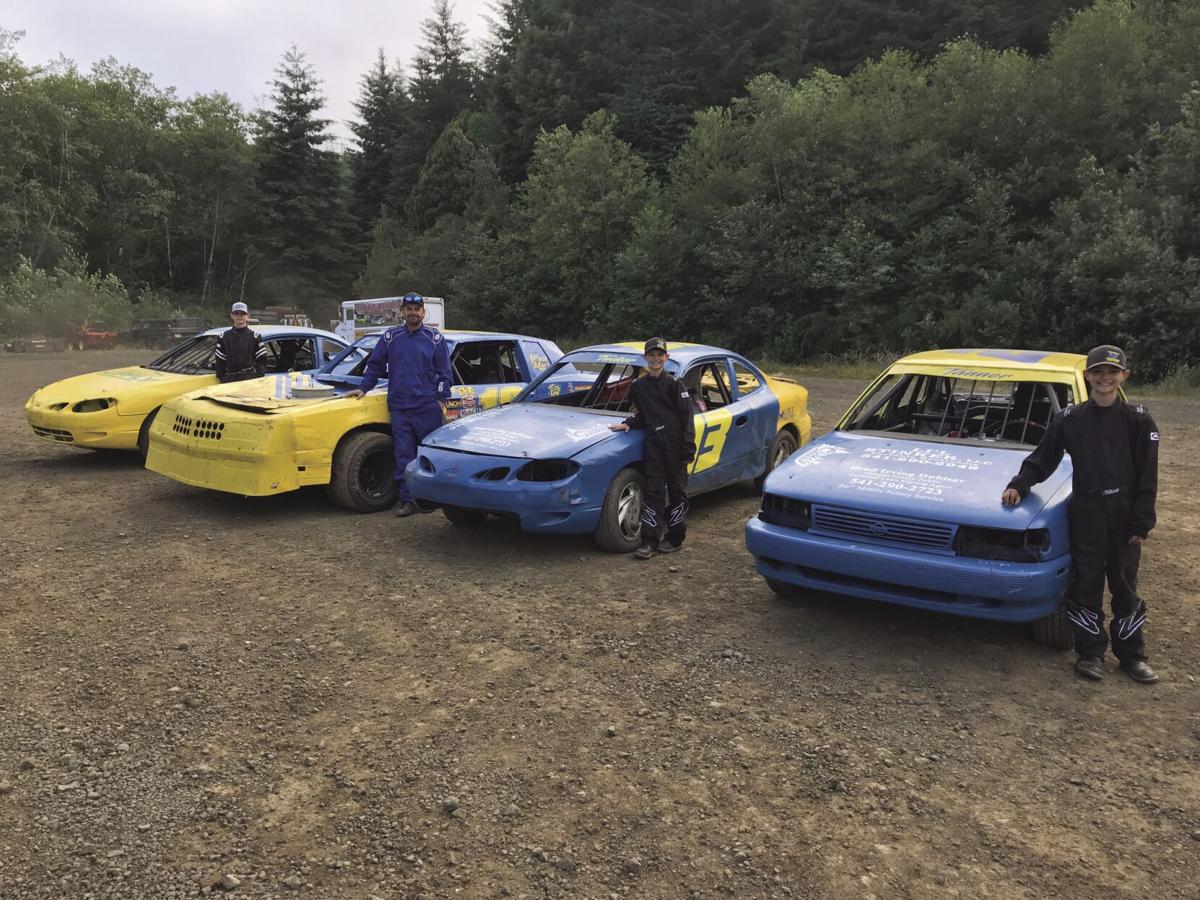 The racing Dubisars of Coquille include, from left, Tallon, Steve and twins Tucker and Tanner, posing before their races Monday at Coos Bay Speedway. 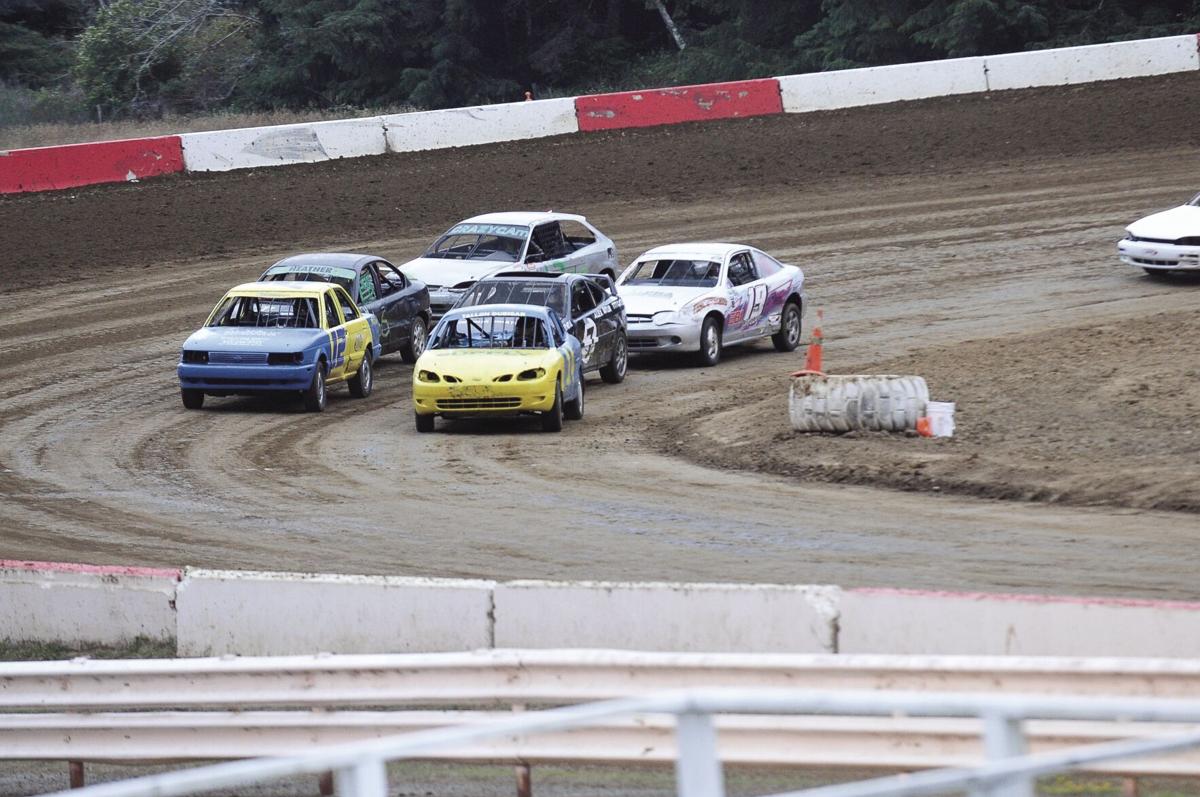 Tallon, right, and Tanner lead the Junior Stingers racers to the green flag during the main event Monday. 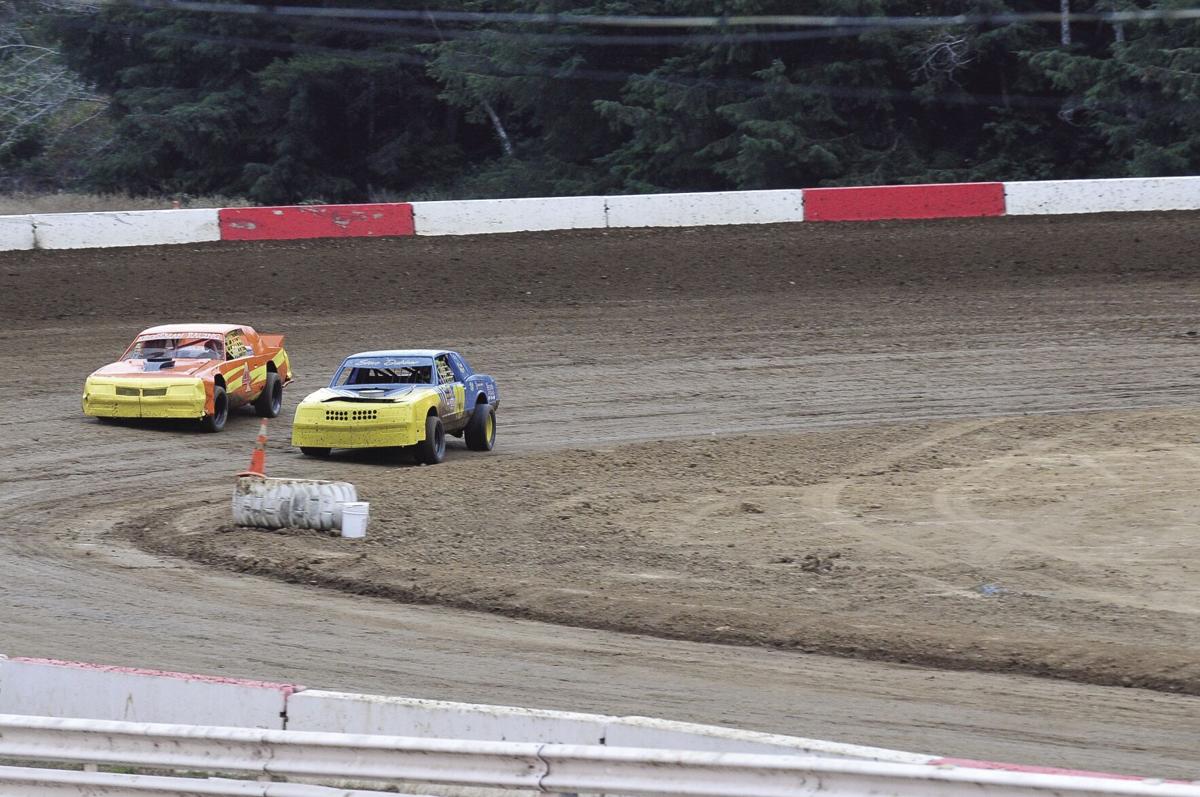 Steve Dubisar passes Justin Krossman on the inside during the main event for the Street Stocks division Monday night.

The racing Dubisars of Coquille include, from left, Tallon, Steve and twins Tucker and Tanner, posing before their races Monday at Coos Bay Speedway.

Tallon, right, and Tanner lead the Junior Stingers racers to the green flag during the main event Monday.

Steve Dubisar passes Justin Krossman on the inside during the main event for the Street Stocks division Monday night.

COOS BAY — For 14 seasons, Steve Dubisar has been racing cars at Coos Bay Speedway, preparing a car on Saturday nights throughout the spring and summer for races on the speedway’s dirt oval.

In addition to his Street Stocks car, Dubisar is helping three youngsters in their first year of racing in the popular Junior Stingers division.

Racing fans have gotten used to seeing the three cars, sharing similar blue and yellow color schemes to Dubisar’s, driven by his son, Tallon, and Tanner and Tucker, the twin sons of his girlfriend, Stephanie Kelner (the twins have taken his last name for racing purposes, meaning three Dubisars in the lineup).

It’s made for a busy, but enjoyable season for Dubisar.

“I have more fun watching them than racing myself,” he said Monday night, when the speedway hosted the opening night of Speedweek for the touring Western Sprint Car Series.

Between his own races, Dubisar was at the fence watching the three kids racing in theirs.

“It’s a pretty cool experience teaching them,” he said. “They’ve all been watching me drive. They all listen pretty well.”

The Junior Stingers division is for drivers 11 to 14 years old. The twins are 11 and have been looking forward to the chance to race.

Tallon, meanwhile, is 13 and a racing veteran from years driving in the Karts class at Cottage Grove Speedway, though this is also his first year racing cars.

Tallon started racing when he was 5 and was the Karts division champion at Cottage Grove in 2015, when he won seven races.

This year has been an adjustment, of course, switching to a car. He’s also had to adjust to his car for the Junior Stingers being a front-wheel drive vehicle. He looks forward to moving up to the Street Stocks, maybe as early as next year, so he can be in a rear-wheel drive vehicle like his cart again.

While Tallon has been racing for years, the twins were completely new to driving this year.

But it’s something they’ve been looking forward to.

“When I started watching the other (young) people racing, it was something I wanted to do,” Tanner said. "I’ve been waiting forever because you had to be 11. It was a long, long wait.”

They didn’t have much prep before they found themselves in races.

“We had two test-and-tunes (at the speedway) and we drive at home,” Tucker said.

Stephanie Kelner said the twins have been blessed with their situation at home.

“We’ve got a long driveway down to the neighbor and a very supportive neighbor,” she said. “She watched them learn and then she comes out and supports them every weekend.”

In addition to learning to drive, they’ve had to learn to race.

And a few elements stand out, the twins said.

“You have to hold your line and keep control of your car — and not to lose your temper,” Tanner said.

“You need to step on the gas and not to let off way before the turn,” added Tucker.

They also have learned to appreciate those who have made racing possible.

“I’d like to thank my sister (Taylor) for helping me get on the track, and my mom,” Tallon said. “And the sponsors help us out a lot.”

Those people have given the kids a chance to get their start in racing.

They’ve had mixed results. Tallon has won a pair five heat races during the season and also finished second in five main events. He currently sits third in the points standings (Tanner is fifth and Tucker seventh).

“I’m happy,” Tallon said. “I could have done better some nights.”

Tanner got his first heat race win on June 19 and regularly finishes in the middle of the pack in the main events.

Tucker also has a single heat race win. The past few events, he’s had mechanical issues.

“Right now my car is crapping out,” he said.

The twins said they were nervous for their first race, but have been fortunate not to have any bad accidents.

Tucker said another driver hit him one night and he almost went into the wall.

Tanner’s scariest moment was watching another driver roll over during a crash in one of his races.

Kelner said she doesn’t get nervous watching them race.

“I was worried in the beginning when they all wanted to race together that it would create competition between them and it hasn’t,” she said. “It’s been neat. It’s brought them all together.

“They all go out and help each other with their cars and have a good time.”

Dubisar said the kids do a lot of the work on the cars themselves, including changing the oil and other maintenance elements.

The kids also painted their own cars, following the same colors as Dubisar.

“It’s our whole team’s colors,” Tucker said. “I really like them.”

There is a pattern to their colors.

Tallon, the oldest of the kids, has yellow on the front of his car, with the rest blue. Tanner, who is just older than his twin brother, has yellow in the middle and Tucker in the back.

One neat trend that has developed during the season is the kids becoming close friends with the other drivers in the Junior Stingers division.

“They don’t see each other at schools — they are from different towns,” said Ashley Dubisar, Tallon’s mom and Steve’s former wife. “It’s kind of like a club sport.”

“On a Saturday night, they all run around together,” Kelner said, adding that all the drivers across the divisions get along. “The whole racing community is that way. There’s not a lot of competition off the track.

“It’s a good place to raise kids around.”

Tallon has been making trips to the track since he was a young child, along with his younger sister, Lauren.

“I would bring them here and they would fall asleep to race car noises,” Ashley said.

It’s only fitting that Dubisar has passed on the love of racing. He says he got hooked watching his dad and uncle race.

Now Tallon and the twins are gaining the same appreciation for the sport.

“It’s fun,” Tanner said. “It’s something fun to do every weekend.”