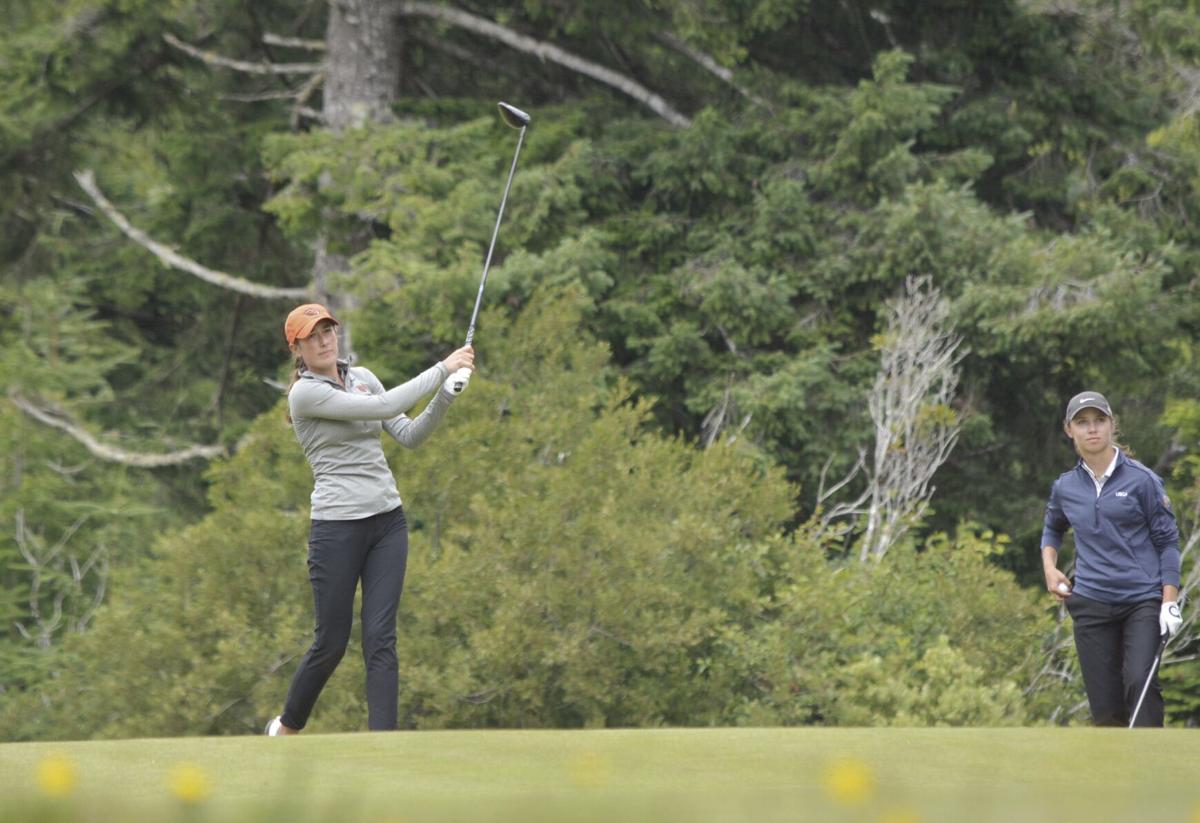 Ellie Slama hits a drive during the women’s championship match in the Oregon Amateur golf tournament at Bandon Trails Golf Course on Saturday as her opponent, Mary Scott Wolfe, right, looks on. Slama won the 36-hole final by a 7 and 5 margin. 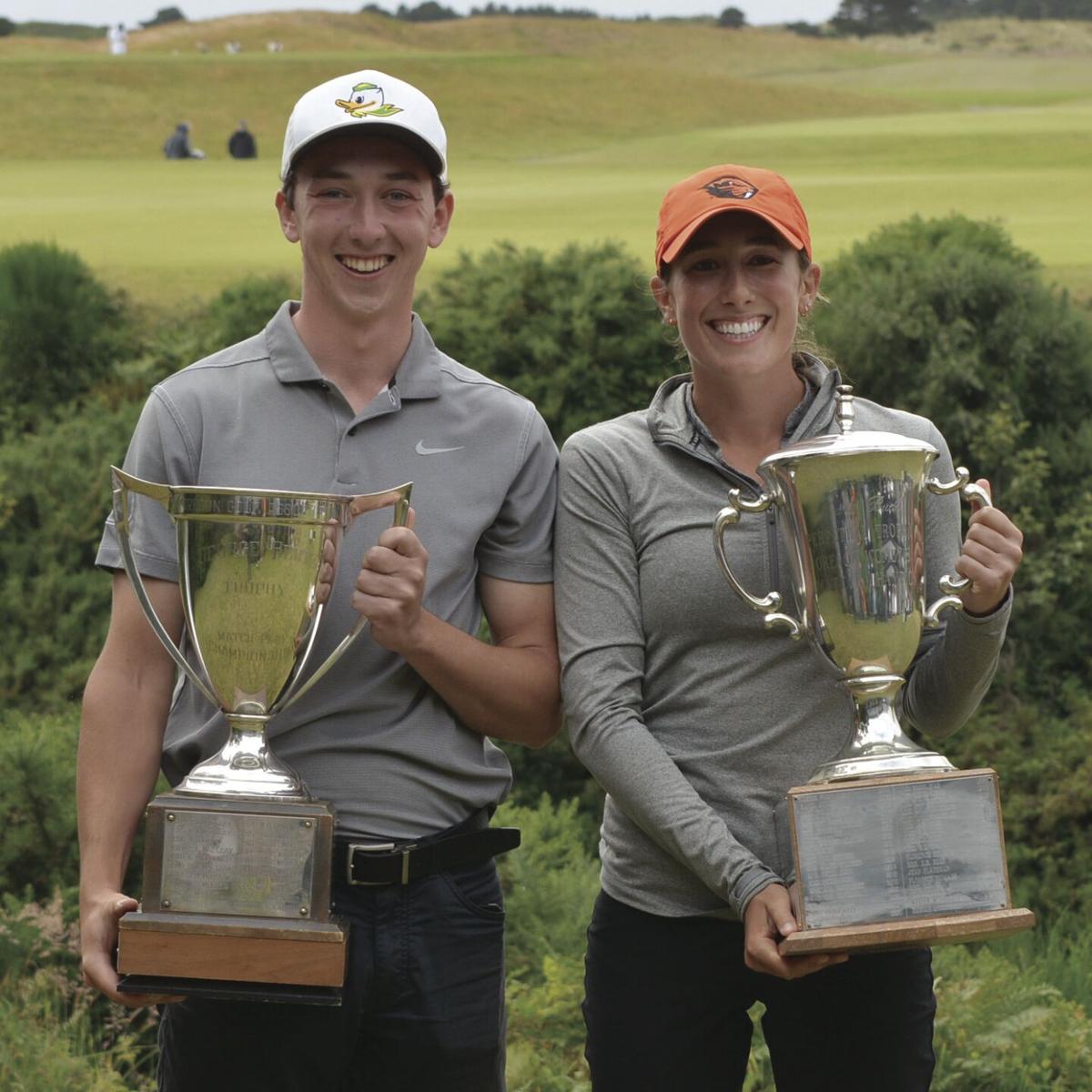 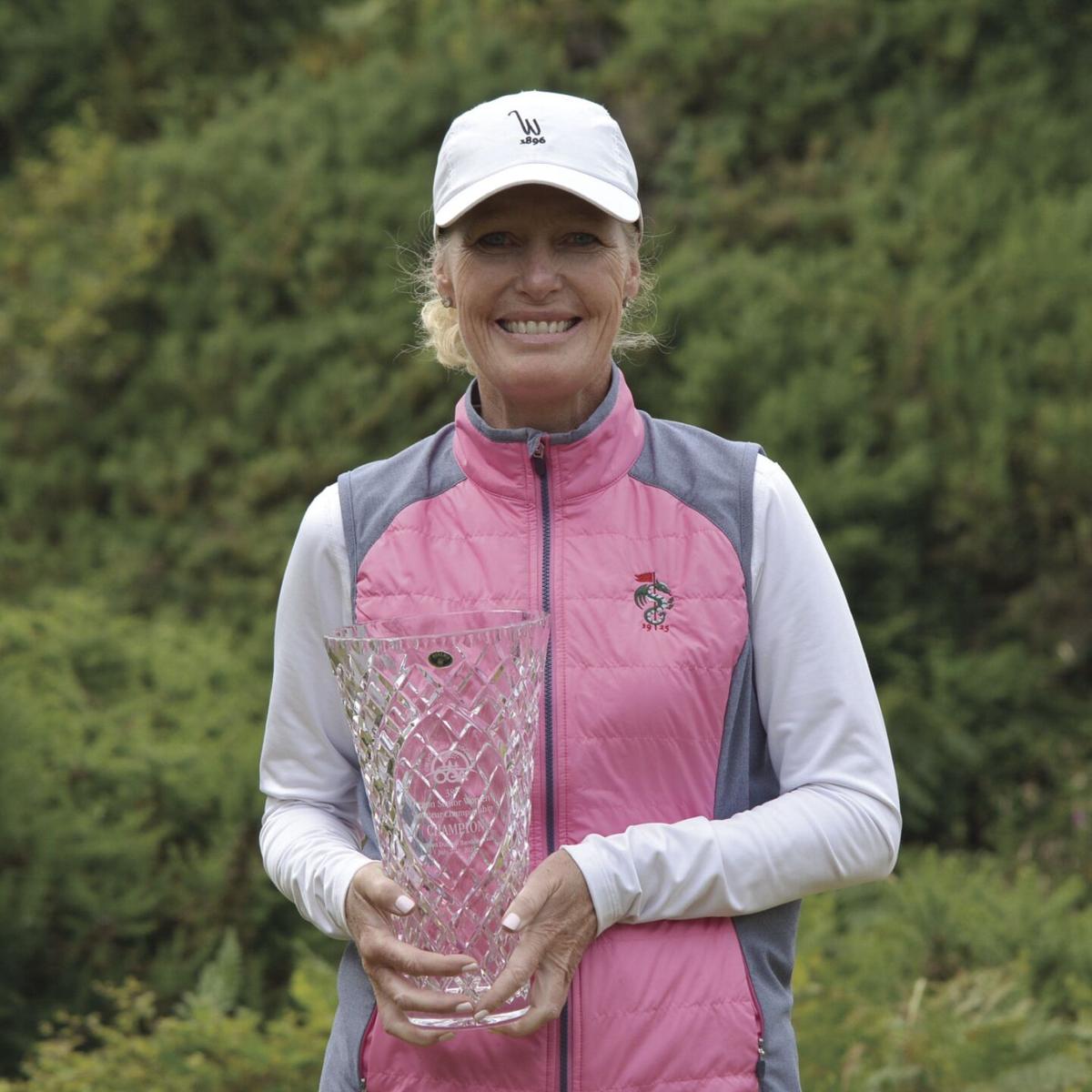 BANDON — Ellie Slama and Lara Tennant added to their collection of Oregon Amateur titles and Nate Stember won his first crown in the event, which was contested at Bandon Trails, one of the courses at Bandon Dunes Golf Resort, last week.

Slama, a star at Oregon State University from Salem, won her third title in four years by taking the women’s title in the 112th Oregon Amateur. She also won in 2018 and 2019 and lost in the final last year.

Tennant, from Portland, won her fifth title in the 38th edition of the Oregon Senior Women’s Championship.

Three players with South Coast ties participated in the Oregon Amateur, all advancing to match play and winning their first match and losing their second.

Slama dominated the women’s portion of the tournament. She earned the top seed for match play by shooting rounds of 69 and 74, finishing 1-under in qualifying.

When she got into the match play portion of the event, she won her first four matches without getting as far as the 15th hole, beating Audrey Dalton 6 and 4, Franca Polla 8 and 7 and Rosie Cook 9 and 8.

Slama had a close call in the semifinals, when she edged Mongtomery Ferreira in a match stretched to the 19th hole. Slama won the first three holes in that match, but Ferreira caught up by the 17th hole. Ultimately Slama won on the first extra hole, but she got early momentum with an ace on the par-3 second hole.

In the 36-hole final against Gonzaga student Mary Scott Wolfe from Beaverton, Slama never trailed, again winning the first three holes and leading 4-up after the first 18 holes before eventually closing out the match 7 and 5 with a birdie on the 13th hole. Wolfe was the 2019 Oregon Junior Amateur champion.

Marie Simonds, the director of the Wild Rivers Coast Alliance, tied for 29th in qualifying, bouncing back from a 91 in the first round to shoot an 82 in the second.

When she got into the match play bracket, Simonds beat the No. 4 seed, Kyra Ly, 3 and 2. In the second round, she overcame a late three-hole deficit against Ferreira before Ferreira won the match with a birdie on the 21st hole.

Stember was the top seed for the men’s bracket after rounds of 72 and 66.

He then won six matches over four days. In the 36-hole final, Stember beat Mateo Fuenmayor of Portland 3 and 2, winning the last three holes after Fuenmayor had tied the match on the 30th hole.

The final matched college rivals, with Stember and Fuenmayor sophomores to be at Oregon and Oregon State, respectively.

Two men with South Coast ties were in the event.

Frame opened match play with a 3 and 1 win over Matt Hartley of Vancouver, Wash.

But in the second round, he fell to Fuenmayor, the eventual runner-up, 4 and 2.

The other player with local ties was Kevin Rei, a caddie at Bandon Dunes for a number of years, who was the No. 34 seed after qualifying and won his first match 4 and 3 over Graham Moody before losing to Taylor Klopp in a match that went 19 holes. Klopp was the No. 63 seed but earlier knocked off the No. 2 seed Daniel Campbell.

In the senior women’s division, Tennant won her first two matches 3 and 2 before beating Ginny Burkey 4 and 3 in the final. It was a rematch of the final last year at Columbia Edgewater Country Club.

She now has the second most titles in the event behind Joan Edwards-Powell, who won six between 1997 and 2009. Tennant is the only one to win five in a row.