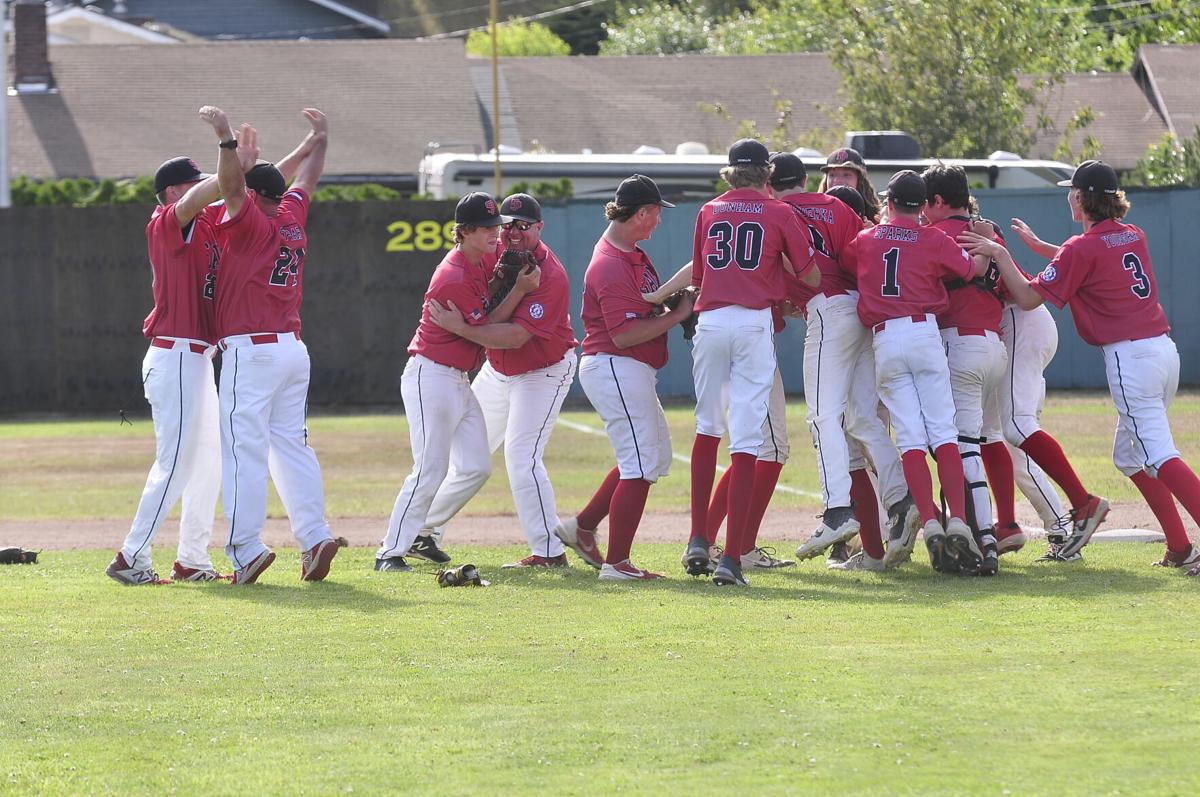 Sandy celebrates after the final out against Brewster on Saturday in the Pacific Northwest Babe Ruth Regional Tournament for the 14-year-old age group. 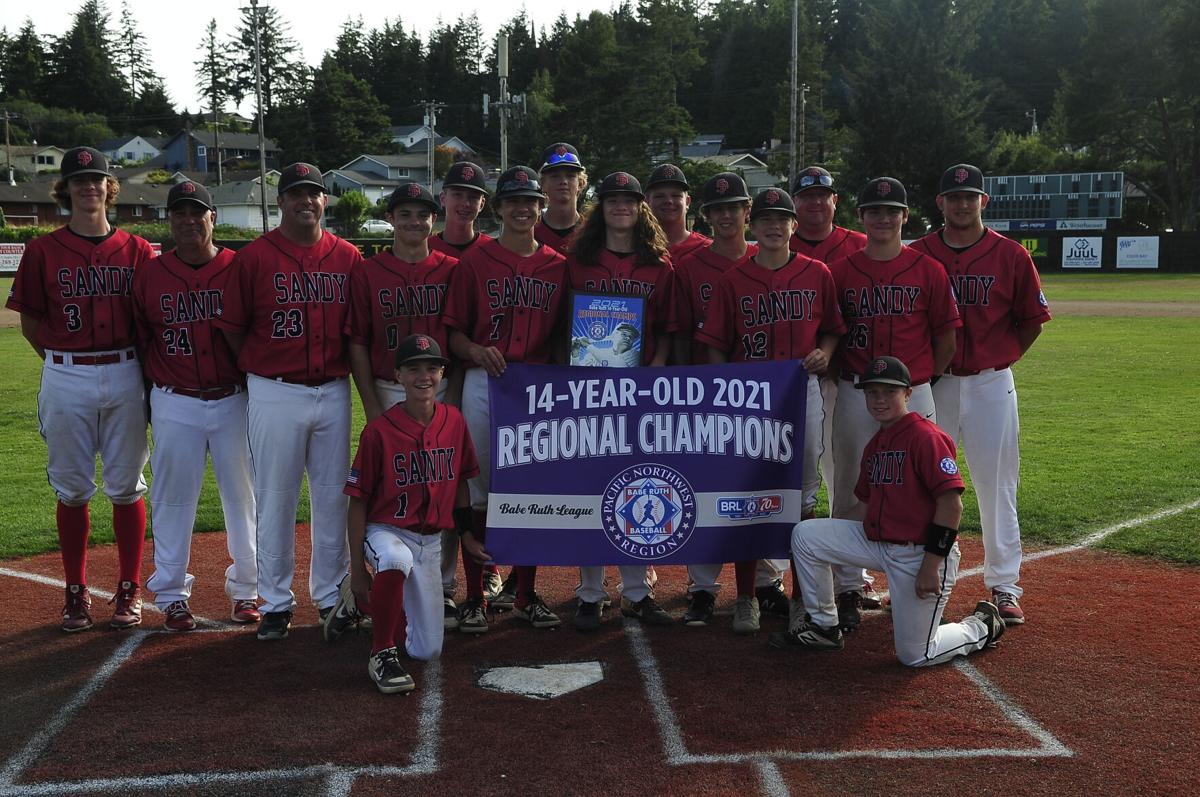 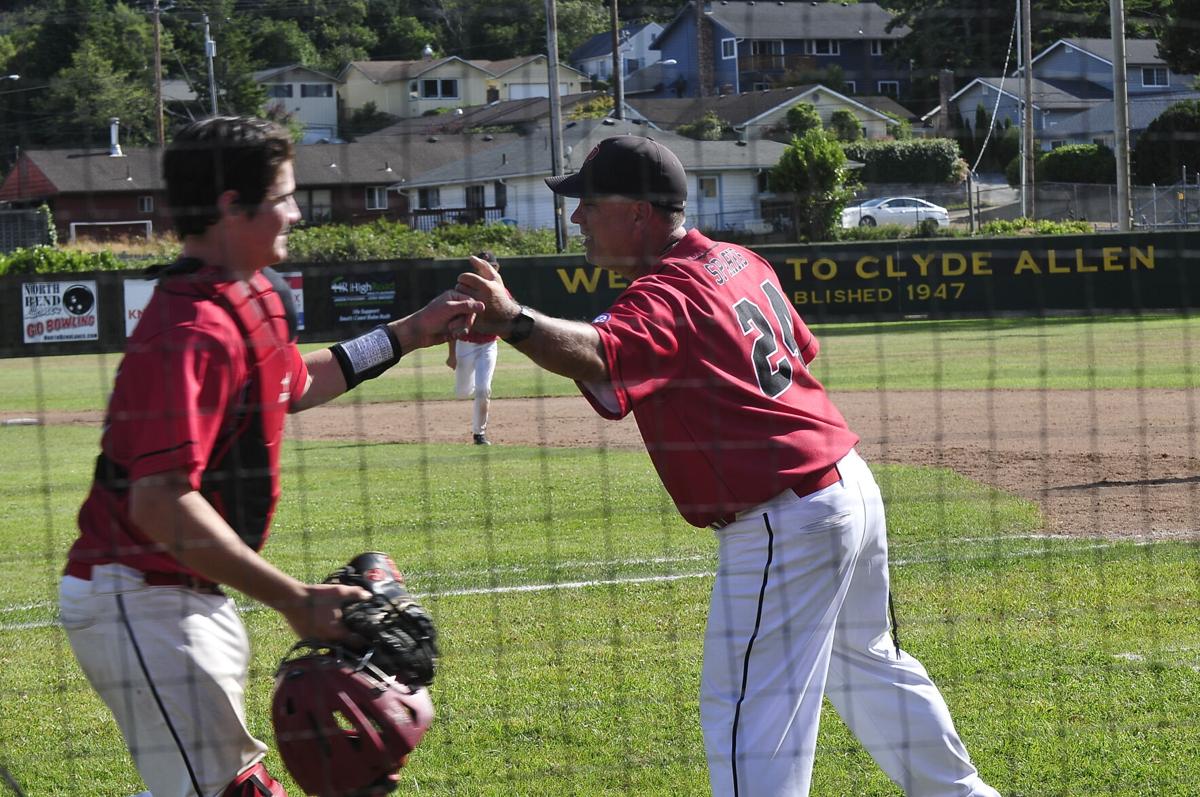 Sandy coach Ryan Sparks congratulates catcher Jonathin Silvis as he comes off the field following the final out of the sixth inning in the championship game Saturday. 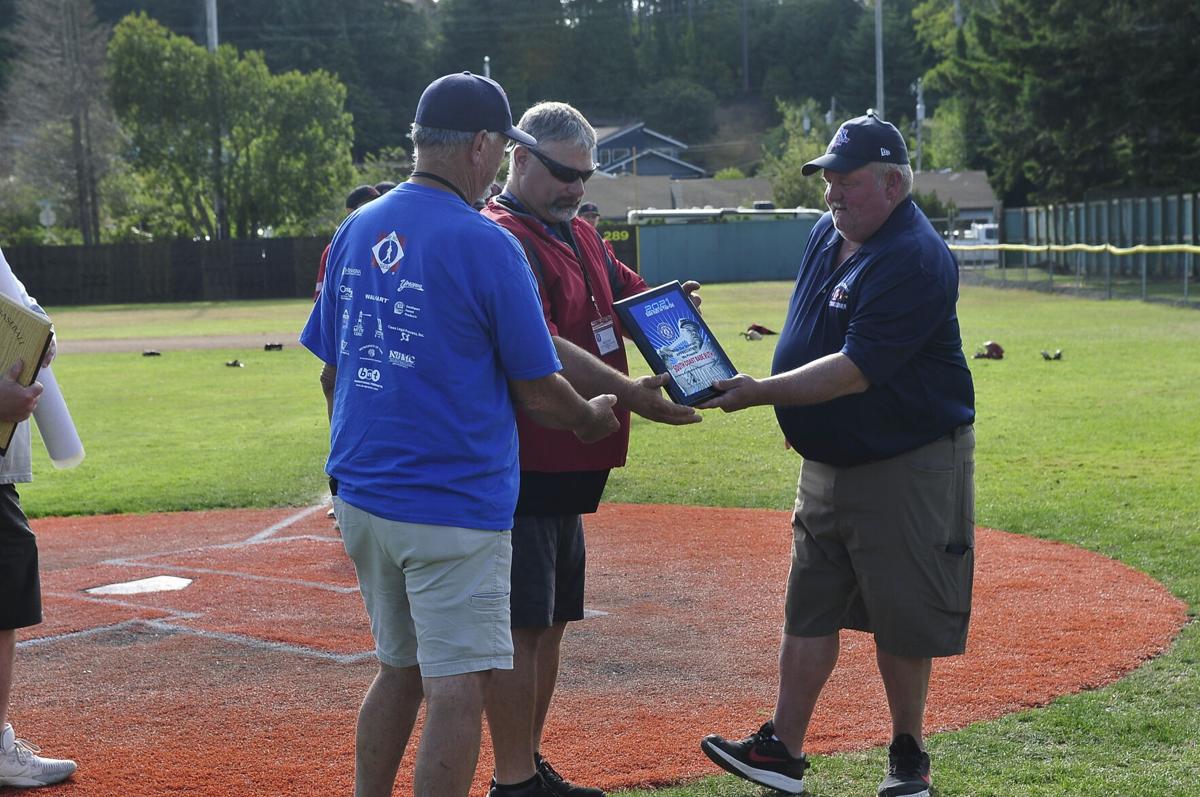 Sandy celebrates after the final out against Brewster on Saturday in the Pacific Northwest Babe Ruth Regional Tournament for the 14-year-old age group.

Sandy coach Ryan Sparks congratulates catcher Jonathin Silvis as he comes off the field following the final out of the sixth inning in the championship game Saturday.

Instead, Sandy turned things around and won three games in a row to capture the tournament title and earn a trip to the Babe Ruth World Series in Ottumwa, Iowa.

“Our pool play wasn’t great, but the thing that was great is these boys knew what they were about and how they could play,” manager Mike Kosderka said after the squad’s 5-2 win over Brewster in the championship game Saturday.

The team’s confidence came from a long history together.

“This team has been together since they were 7 years old,” Kosderka said. “This was their fifth regional tournament and second time in the finals.”

Sandy scored three unearned runs after a two-out error in the first inning and added two runs in the fifth inning after Brewster narrowed the lead to 3-2.

Jonathin Silvis scored in both the first and fifth innings for Sandy. Meanwhile, the team played nearly flawless defense, including turning a double play to get out of trouble in the sixth inning to protect the lead.

Kosderka said Sandy’s team is somewhat unique since all the kids have been together as a team for so many years, starting practice early each year, with all the kids showing up even though workouts are not mandatory.

As a result of that teamwork and commitment, Sandy made the age-group regionals when the players were 9, 10, 11 and 12 years old before last year’s season was scrapped because of the COVID-19 pandemic.

Now the team is going to the World Series.

“I don’t even know what to say,” Kosderka said. “I am so excited for the boys.”

Brewster advanced to the championship game in dramatic fashion earlier Saturday despite the Centerfield Roosters throwing a no-hitter in their semifinal contest.

The teams were scoreless into the bottom of the seventh inning when Brewster’s Carter Kuchenbugh reached on a throwing error after a grounder to third base, moved up to third on a wild pitch, and scored on another error on a grounder by Brennan Smith.

The Roosters only had three hits in the game and never had a runner advance as far as third base.

Sandy, meanwhile, beat Puyallup 6-2 in the other semifinal after knocking host South Coast out of the tournament Friday night.

Puyallup had been unbeaten while winning the American Division, including a 9-4 win over Sandy. The Roosters also beat Sandy in pool play, 6-4, but Sandy got hot at the right time to advance to the championship, starting with the 13-2 win over South Coast in their elimination game Friday.

While Sandy was the big winner on the field, the tournament organizers came away thrilled with the first Babe Ruth regional to visit the Bay Area.

“This tournament has been flawless in terms of how it’s been run,” said Todd Wagner, the commissioner for the regional. “I couldn’t be happier with how things have gone.

“We have received nothing but positive feedback from the people. It’s as simple as that. People are happy to be here. They are very impressed with the organization. They are happy with the facilities.”

That included the use of Marshfield’s baseball field as a practice facility for the teams in cooperation with Marshfield coach Floyd Montiel.

“I think it’s been a great tournament,” Platt said. “The parents, the players, the teams, the coaches have all been warm and inviting and liked our hospitality.

“Everyone had a good time.”

They were especially delighted with Clyde Allen Field, Platt said.

“They come in and get to play in this place,” he said, adding that some teams mentioned playing in city parks. “The kid were impressed. The parents were the really impressed ones.”

Wagner and local organizers would love for the South Coast to host another regional tournament soon.

“We talked about some different stuff for future tournaments here, and ideas that they’ve come up with,” Wagner said. “Hopefully, the next time we have another regional tournament here, and I firmly believe we can get one, it will be bigger and better.”