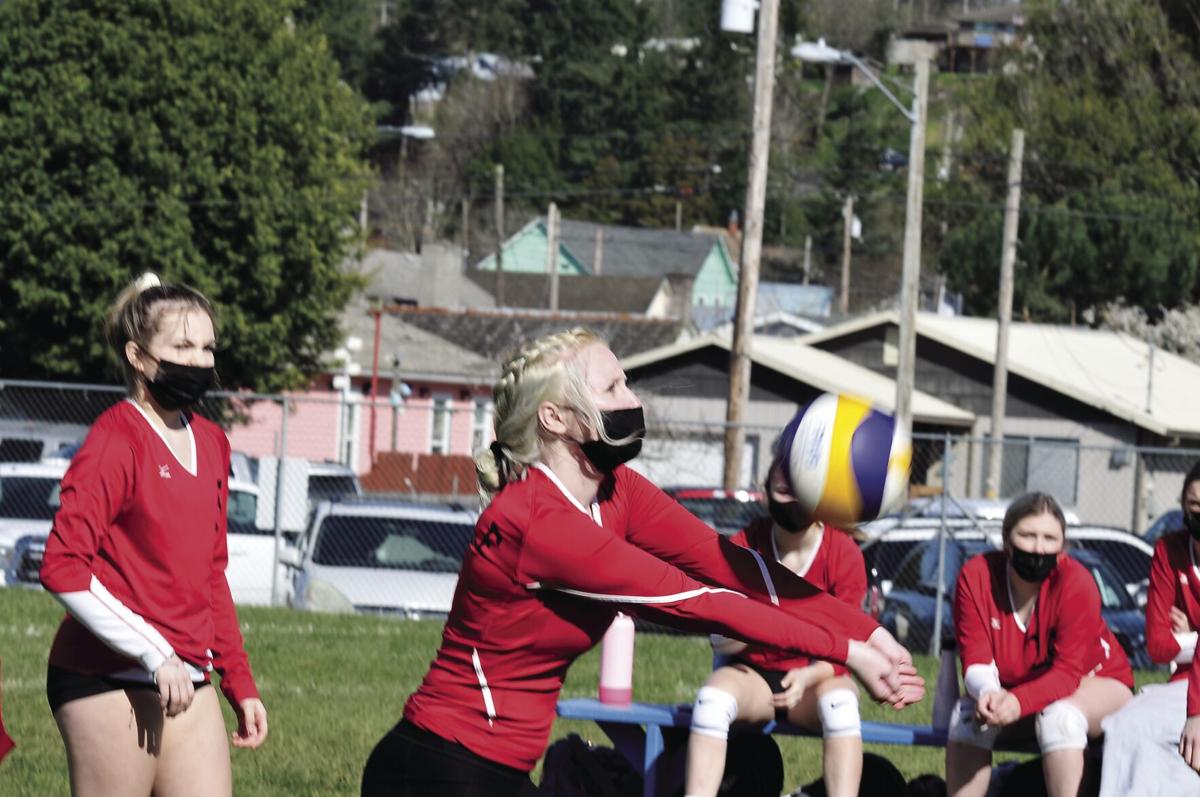 Coquille's Lily Thomas bumps the ball to a teammate during Tuesday's match in Myrtle Point. The Red Devils beat the Bobcats in five sets in a match played on the football field. 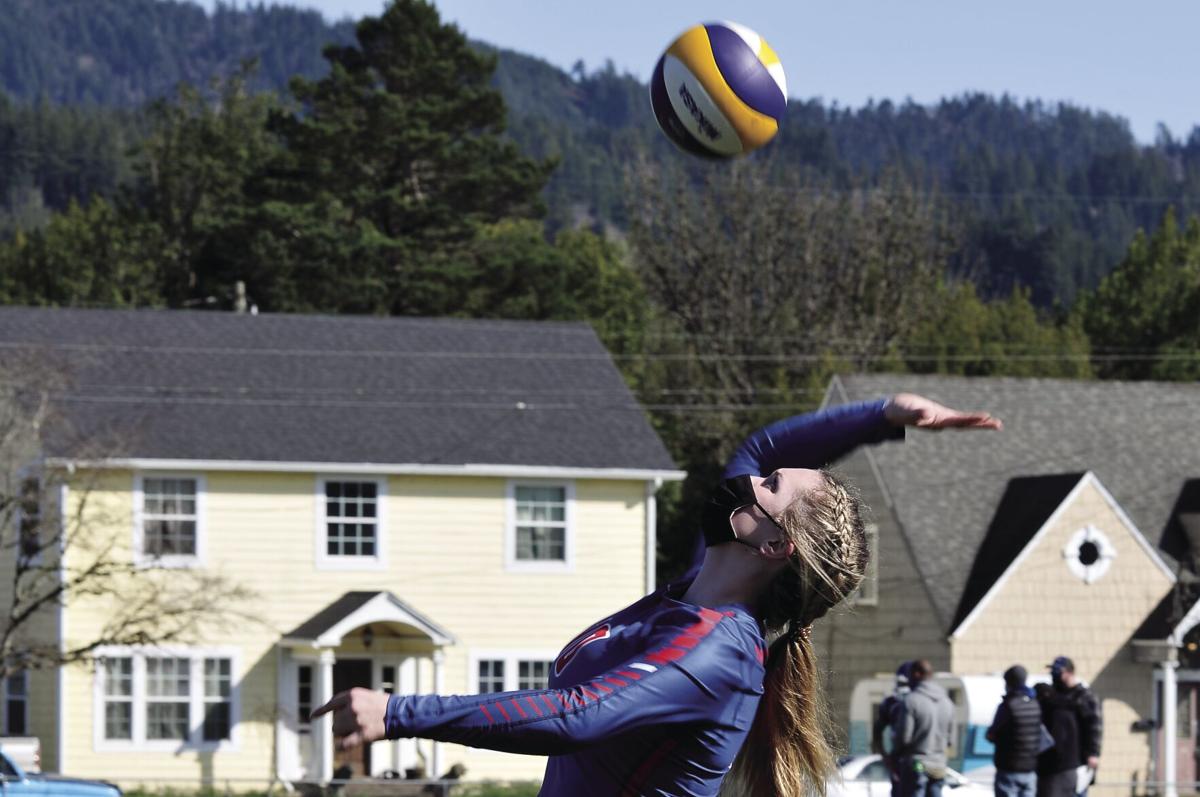 Myrtle Point's Grace Bradford focuses on a serve during the Bobcats' match against Coquille on Tuesday. Bradford served a number of aces to help Myrtle Point win the second set against the Red Devils.

Coquille's Lily Thomas bumps the ball to a teammate during Tuesday's match in Myrtle Point. The Red Devils beat the Bobcats in five sets in a match played on the football field.

Myrtle Point's Grace Bradford focuses on a serve during the Bobcats' match against Coquille on Tuesday. Bradford served a number of aces to help Myrtle Point win the second set against the Red Devils.

MYRTLE POINT — In this strange volleyball season when Coos County’s high school teams can’t play matches inside because the county is in the extreme-risk category, Myrtle Point set up a court on the football field.

And on Tuesday, the Bobcats hosted the first of their two matches in bright sunshine on turf that had conditions unlike a day earlier, when they had their first practice on the makeshift court.

“It was a mud pit yesterday,” said Heavenlee Reynolds, one of the team’s two seniors.

The field was just fine Tuesday, though Reynolds ended up with a mud spot on her jersey from diving for a ball during the match.

Though the wind picked up during the match, it largely represented traditional volleyball and both teams got better and better with longer rallies over five sets before the Red Devils finally prevailed over their longtime rivals.

“It was fun,” said Coquille senior Ellie Ekelund, who missed the Red Devils’ first outdoor match last week against Bandon. “It feels really good to be back on the court.”

The teams both lost their first matches last Friday — Coquille at Bandon and Myrtle Point at Reedsport — but were much improved their second time out.

In Coquille’s case, that was due in part to better conditions — Tuesday’s wind was not nearly as bad as what the Red Devils faced in Bandon — and partly due to spending more time on the court.

Teams can only practice inside with six players at a time, so Tuesday was just the second time the entire group was working together.

“I think we’re happy (with how we are doing),” Ekelund said. “It would be even better if we could work (all 12) together in practice.”

Since she missed Friday’s match for an appointment, Ekelund hadn’t played with some of her younger teammates this year, and she came away from Friday’s match impressed.

“It was awesome,” she said. “We’re starting to see the end of the tunnel.”

While Coquille used several substitutes, Myrtle Point coach Tami Brown has chosen to play just the six players in her varsity cohort in the Bobcats’ two matches, though she did dress two freshmen in case of injury.

“The fact that I can only have six in a practice at a time, it works,” she said. “They’re all real well-rounded kids.”

Reynolds shares setting duties with the team’s other senior, Tayler Thomas, but all the Bobcats are capable of multiple positions.

“We used to have only our own position,” Thomas said. “We are learning to do more.”

The squad includes two seniors, two juniors and two sophomores, and the group is getting better each time out, Thomas said.

“When we talk (on the court), we accomplish much,” she said, adding that the players encourage each other.

Like Coquille, the Bobcats made a big jump in teamwork and quality of play from Friday’s opening match.

The players enjoyed going five sets, too, getting as much time on the court as possible.

“We’re enthusiastic about getting to play,” Reynolds said. “We’re making the most out of it.”

Getting a chance to do things has been a theme for the Bobcats. With volleyball matches an uncertainty given the indoor regulations, Brown asked her players to join the cross country team for its conditioning work, and Thomas and Reynolds are planning on running in the district meet for the Bobcats. They’ve joined the cheer team for football games, too.

“We’re making the most out of our senior year,” Thomas said.

As far as volleyball, they are most excited about Saturday, when they will join several other South Coast teams in Gold Beach, which is in Curry County and doesn’t have indoor restrictions for teams competing.

“I’m excited we get to play in a real gym,” Thomas said.

But Tuesday’s match was better than nothing. And the presence of a number of parents cheering on the players was nice, too.

“It’s definitely a different ballgame outside,” Brown said. “It definitely felt like a real game having fans.”