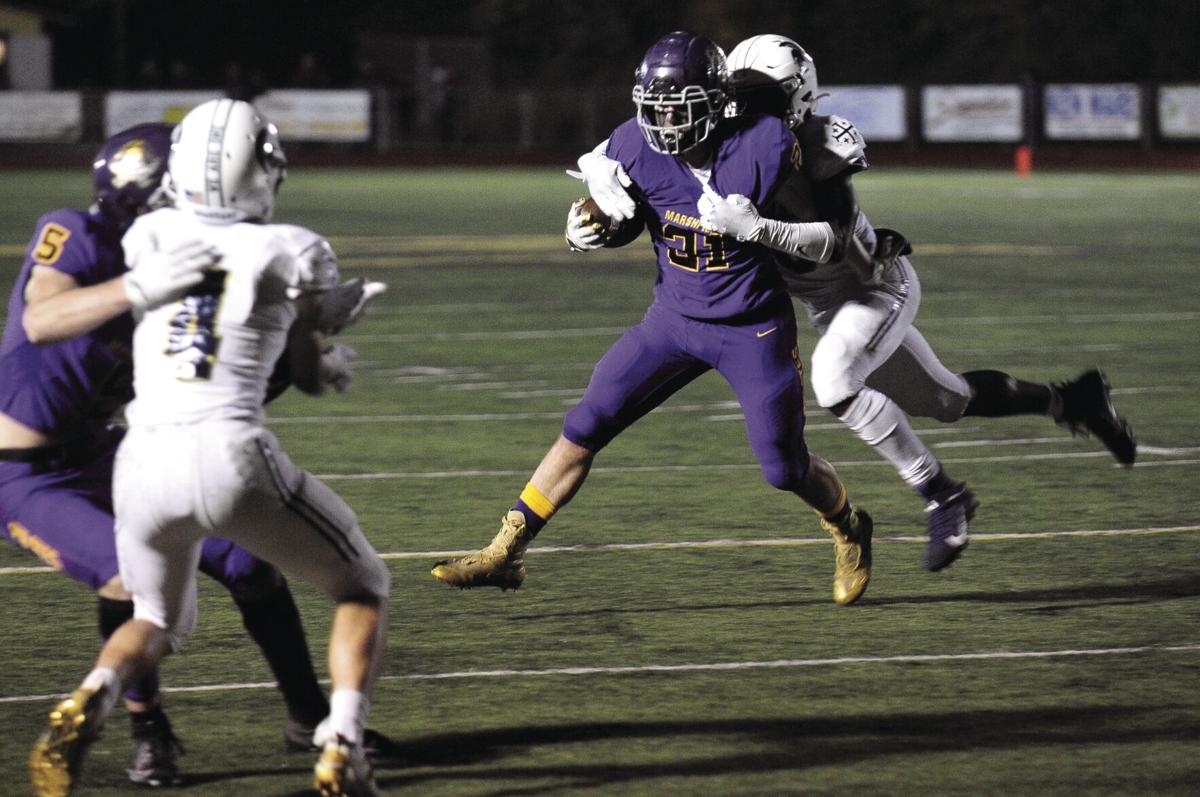 Marshfield’s Miguel Velazquez tries to break out of a tackle by a Marist Catholic defender during Friday’s game. 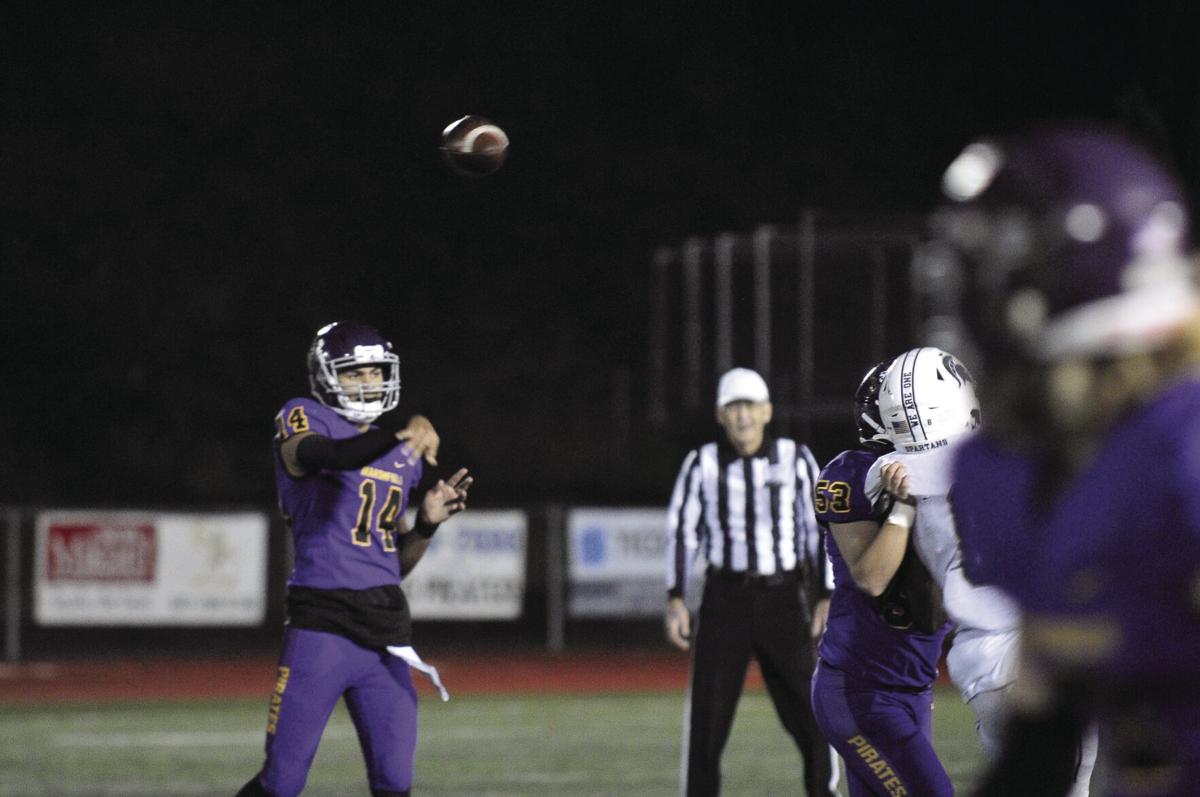 Marshfield’s Miguel Velazquez tries to break out of a tackle by a Marist Catholic defender during Friday’s game.

The Pirates, who have been the top team in the Class 4A coaches poll for most of the season, also are the top seed for the playoffs and will host Madras on Friday night in the opening round. A win would give the Pirates another home game in the quarterfinals against either Henley or Tillamook.

“It’s win or go home,” Marshfield quarterback Dom Montiel said. “We’re 14-1 in the past 15 games. Whatever we have been doing has been working.

“Our goal is to win every game.”

Marshfield’s last loss, during last spring’s shortened season, came by six points on the road to Marist Catholic, so Friday’s win had extra meaning for a lot of the players.

“It’s the first time in my high school career we beat them,” Marshfield senior DJ Daugherty said. “I’m really excited about that.”

Technically, Marshfield beat the Spartans when the current seniors were freshmen, but most of them played relatively little on varsity that season.

That also was the last year Marshfield won a league title in football.

Montiel was phenomenal in his final regular-season game for the Pirates, throwing for 404 yards and seven touchdowns.

As has been typical, numerous players were on the receiving end of his passes, which has been a nightmare for opponents.

“We really spread the ball around good tonight,” Daugherty said. “Everyone helps out. It’s great.”

Daugherty caught nine passes for 133 yards and Maddux Mateski and Pierce Davidson each caught seven for a combined 217 yards.

Daugherty was on the receiving end of three of Montiel’s touchdown passes, but it was one he caught from Marist Catholic quarterback Carter Greene that essentially clinched the win.

The Pirates were leading by two scores with the Spartans making a late surge when Daugherty intercepted a pass overthrown by Greene.

“Overall, it was a really good team effort,” Daugherty said. “We made plays when we needed to.”

Marshfield was almost able to run out the clock after the interception, but Marist Catholic had just enough time for one last touchdown on the final play to make the score closer.

The big issue for the Spartans was trying to stop Montiel and Marshfield’s offense, something Marist Catholic wasn’t able to do often after forcing a Marshfield punt on the opening possession.

Montiel connected with Daugherty for the first score, from 7 yards out, midway through the first quarter. He hit Mateski with a long pass to set up the second score, from 4 yards.

Marist Catholic star Lucas Tuski scored on a 46-yard run on the first play of the second quarter, but the Pirates responded quickly with Mateski going 34 yards on a swing pass.

Marist pulled within seven points again when Greene connected with Conner Chase for a touchdown with 4:38 to go in the second quarter, but the final seconds of the first half proved pivotal.

First Montiel hit Mason Pederson for an 11-yard touchdown with just 13 seconds to go and then a 50-yard Marist Catholic touchdown pass was nullified by a holding penalty.

The Spartans again pulled within seven on a pass from Greene to Kaiden Ayoma in the third quarter, but Montiel and Daugherty hooked up on a 56-yard score almost immediately and Montiel’s 3-yard pass to Miguel Velazquez gave the Pirates a seemingly safe 41-21 lead later in the third quarter.

Greene then connected with Ryan Cary for the first of three TD passes, followed by Montiel’s last touchdown pass to Daugherty, this time from 23 yards out.

Even after Greene’s second TD pass to Cary, Marshfield’s lead appeared safe. But Jack Hudson intercepted a Montiel pass that was batted into the air, setting up Daugherty’s pivotal late interception.

Marshfield coach John Lemmons said the late stages of the game provided a valuable lesson for the Pirates with the playoffs looming.

“I’m not super pleased with the decision making,” he said, adding “there was plenty of (blame) to go around.”

Montiel’s interception came on a run/pass option, something the Pirates do regularly, but Lemmons said he should have just called for a straight run to help milk the clock.

Then, after Daugherty’s pick, the coaching staff thought the Pirates could just go into victory formation and run out the clock, but they left Marist Catholic just enough time to score at the end.

“There’s plenty of things to get better at if we want to win the blue trophy, including us coaches,” Lemmons said.

Daugherty said the Pirates will focus on not letting the playoff hype or top ranking get to them and treat each playoff game like a normal contest requiring diligent preparation and solid execution.

“If we play like us, the only team that can beat us is ourselves,” he said.

Marshfield will try to prove that starting with Madras.