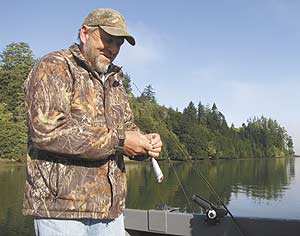 Rick Howard, a local fishing guide, prepares bait for one of his clients last Friday on the Umpqua River. 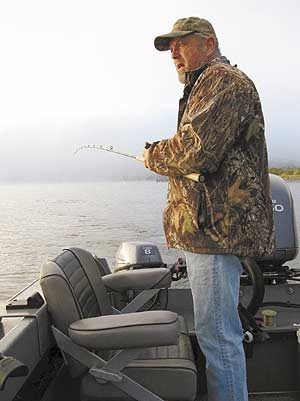 Rick Howard reels in his line while guiding clients last Friday on the Umpqua River. 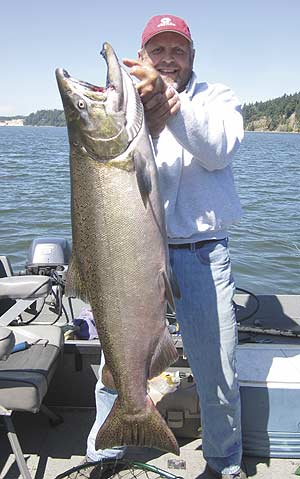 Fishing guide Rick Howard shows off a 40-pound salmon he caught on the Umpqua River on Monday. Though his clients didn’t hook a fish last Friday, fishing has picked up in the Umpqua since then.

Rick Howard, a local fishing guide, prepares bait for one of his clients last Friday on the Umpqua River.

Rick Howard reels in his line while guiding clients last Friday on the Umpqua River.

Fishing guide Rick Howard shows off a 40-pound salmon he caught on the Umpqua River on Monday. Though his clients didn’t hook a fish last Friday, fishing has picked up in the Umpqua since then.

The sun isn't up, but Rick Howard is.

Howard prefers to watch the sun rise from his boat alongside two black labs, with only his boat's motor and the occasional bird squawk breaking the morning silence.

But the fishing guide isn't alone - he's usually got a few clients on board, eager to learn about fishing salmon and steelhead in the Coquille, Umpqua, Sixes, Elk and Rogue rivers, as well as Coos Bay.

They're learning from one of the best. Howard was born and raised in Bandon, as was his father, who taught him to fish. A former building contractor, Howard earned his fishing guide license in 1995, and retired in 2001 to guide full-time.

"I would take my vacation in the fall and go fishing," Howard said. "Now I get to fish all the time."

His passion for fishing started early.

Now he's passing that on to clients, many of which he's seen before.

"Most of the people I fish are repeat clients," he said. "They book the same day every year."

Not all of them are out-of-towners looking to get a taste of South Coast salmon fishing.

"A lot of local guys that don't want to spend their own money to buy their own gear," Howard said.

That was true last Friday, as Shelly Smith, Jack Napier and Victor Napier, all of Langlois, helped Howard launch his boat in the Umpqua River under heavy fog.

The cool, eery morning gave way to a sunny, warm day after a few passes over a salmon-heavy spot. At least, it's usually salmon-heavy. Friday was a different story.

With the sun beaming down on the glassy river, the anglers had yet to see a bite, and only one other boat actually landed a salmon. After each pass, they dutifully checked their baits to see if they needed replaced. Near the end of each pass, Howard pleaded "Come on, fish," hoping to rustle up some last-second salmon before they started all over again.

"They call it fishing, they don't call it catching," Jack Napier said.

Sometimes the fish just won't bite, even if you're riding with an expert.

"Ah, the life of a fishing guide," Howard said, laughing, after the boat came up empty again.

As luck would have it, Howard's clients caught 10 fish the very next day, and he reeled in a 40-pound salmon on Monday, while his wife Ellen caught a 20-pounder.

But the slow fishing last Friday didn't dampen the mood.

There was little to no wind, plenty of mallards gracefully flew past, and occasionally, big sturgeon would jump out of the river.

"Lot of sturgeon in here," Howard said. "The sturgeon are active today."

Everyone agreed that it was a perfect day to be on the water, and Howard dolled out trolling tips as he expertly steered the boat.

He said he stresses four things about salmon fishing: depth, speed, spin on the bait and scent.

"If you can control these things and understand these things, your chances of catching salmon increase," he said.

He kept the speed exact, so they were fishing two to three feet off the bottom. The bait was always ice cold, and he prepared each angler's bait, assuring conditions were perfect.

"It's real easy for people to offend the fish with bait that doesn't spin properly, or have bait with foul flavor to it," Howard said, adding that bait needs to stay off the bottom of your boat.

"There isn't a fish out there that wants to lick the bottom of the boat," he added with a smile.

And no client of his will be holding their own rod while they troll. Excited anglers often jerk the bait away from the fish too early.

"Nothing good ever happens when you jerk on trolling like this," he said. "Fishing is a jerk on one end of the line, waiting for a jerk on the other end."

They talked about family, swapped fishing stories and discussed the possibilities of a good salmon run.

"The run this year's supposed to be 10 percent better."

As long as salmon and steelhead pour into rivers, Howard will be there with the rising sun.

"You know, sometimes it's hard to get up at 4 in the morning, but once you're out on the water and the day breaks, it's really quite refreshing," he said.

"The other thing about fishing is you're getting to share with people. It's exciting to land a big salmon," he said.

"It revitalizes you every day because you get to share that with people and it's really a lot of fun."

Want to learn from Rick?