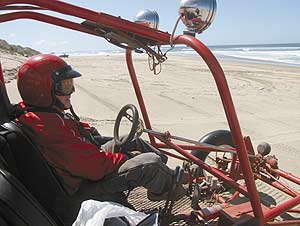 Gene Forgey surveys the ocean and beach as he sits in his dune buggy on Thursday. World Photo by Rachel Finney. 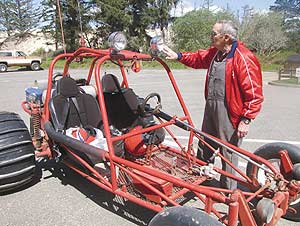 Gene Forgey inspects the lights on his dune buggy Thursday. Forgey, 80, has been a dune buggy enthusiast since the late 1950s. World Photo by Rachel Finney.
1 of 2

Gene Forgey surveys the ocean and beach as he sits in his dune buggy on Thursday. World Photo by Rachel Finney.

Gene Forgey inspects the lights on his dune buggy Thursday. Forgey, 80, has been a dune buggy enthusiast since the late 1950s. World Photo by Rachel Finney.

With shimmering sands stretched out before him, Gene Forgey just slammed the gas pedal.

His dune buggy lurched forward, speeding up a towering dune. The front wheels left the sand for a brief moment as his rail topped over the peak, then plummeted down the other side after a slight rush of feeling weightless.

With the ocean visible in the distance, hills and hills of sand before him and patches of trees and lakes spotting the sand, Forgey doesn’t think twice. He’s experienced this for a long time — back when dune buggies were nothing more than cars and trucks fixed up to drive on sand.

But it’s the views and thrills that keep him coming back, even at 80 years old.

And Thursday afternoon, amidst a clear blue sky and slight cool breeze, he just worried he was going too slow for the group he was leading, which included friends in five dune buggies. They often find themselves following behind Forgey.

“You’re too fast for us, Gene. All that experience,” his friends said after the afternoon of railing.

Experience may be an understatement. He’s been riding the dunes and beaches from Florence to Bandon since 1957 — the year he built his first buggy.

It all began as a trip to beachcomb, but he had so much fun getting to the beach, that he decided to make a serious hobby out of driving the sand. He’s resided on the coast for most of his life, and found the perfect house near his favorite playground.

Forgey has lived across from Spinreel Campground for the past 40 years and can see the dunes from the house he shares with his wife, Arla, whom he married in 1955. Proximity and knowledge of the dunes made Forgey — affectionately called “Mountain Man” — the go-to guy for buggy parts and help when people got stuck or broken down.

“If somebody had a problem, he helped,” said Maxine Rhoades, a close friend of Forgey’s.

Forgey’s group grew as he met more people on the dunes, and with a CB radio in tow, he was easily accessible to haul someone out of the sand or to run to his house to get a part.

“When I started out here, you always help somebody because there weren’t many people here,” Forgey said.

And that’s the only reason he’s lent a hand — because he thought it was the right choice. He’s never made a business out of this, always preferring to call those people friends rather than customers.

He’s met people from all over the world, just because he offered a ride here and there. From small children who miss the large teddy bear that used to tag along in his passenger seat, to a woman from India who just wanted him to go faster though her boyfriend was afraid, Forgey’s taken them all for a tour, and has a funny story for each one.

He told a story of a Vietnam veteran with two prosthetic legs, who gazed at Forgey’s buggy longingly. Forgey offered him a ride, naturally.

A family visiting from Montana still sends him Christmas cards. When he gave them a ride, the children were quite young. Now, they’re married and starting their own families.

That’s why he loves giving tours. He just enjoys sharing his stories and seeing the excitement people get when the buggy speeds up and over a sky-high dune.

“I never accept money for people riding or anything,” Forgey said.

He also loves to fish and hunt, and often, with the help of Arla, brings along a great lunch for day-long excursions. Fresh fish from the ocean and snickerdoodles, an Arla specialty, often feed other dune buggy enthusiasts, Rhoades said from experience.

Rhoades, who has known Forgey since the 1970s, added that he always shared food from his ice chest while they found a spot to toss a Frisbee.

Forgey lamented not having snickerdoodles prepared for the last-minute dune ride on Thursday. His friends didn’t care — they just revved up their buggies, all much more advanced than Forgey’s more old-fashioned rail, and followed his lead.

They traded stories, poking fun at past mistakes and recalling interesting items found on the beach. Forgey said the five buggies were only about half his usual crew, and they can often nearly fill the parking lot at the Spinreel Campground day-use area.

As the afternoon came to a close, his friends loaded their buggies and trickled out, expressing their sincere gratitude to Forgey, hoping they can be much like him when they reach that age.

“Mountain Man has been on vacation all these years, haven’t ya?” Rhoades asked, only partly joking.

But Rhoades leaned forward, out of earshot of the humble man who can’t possibly count how many lives he’s touched, and explained why he’s collected so many friends, herself included.

“This guy here has been an inspiration to a lot of people.”