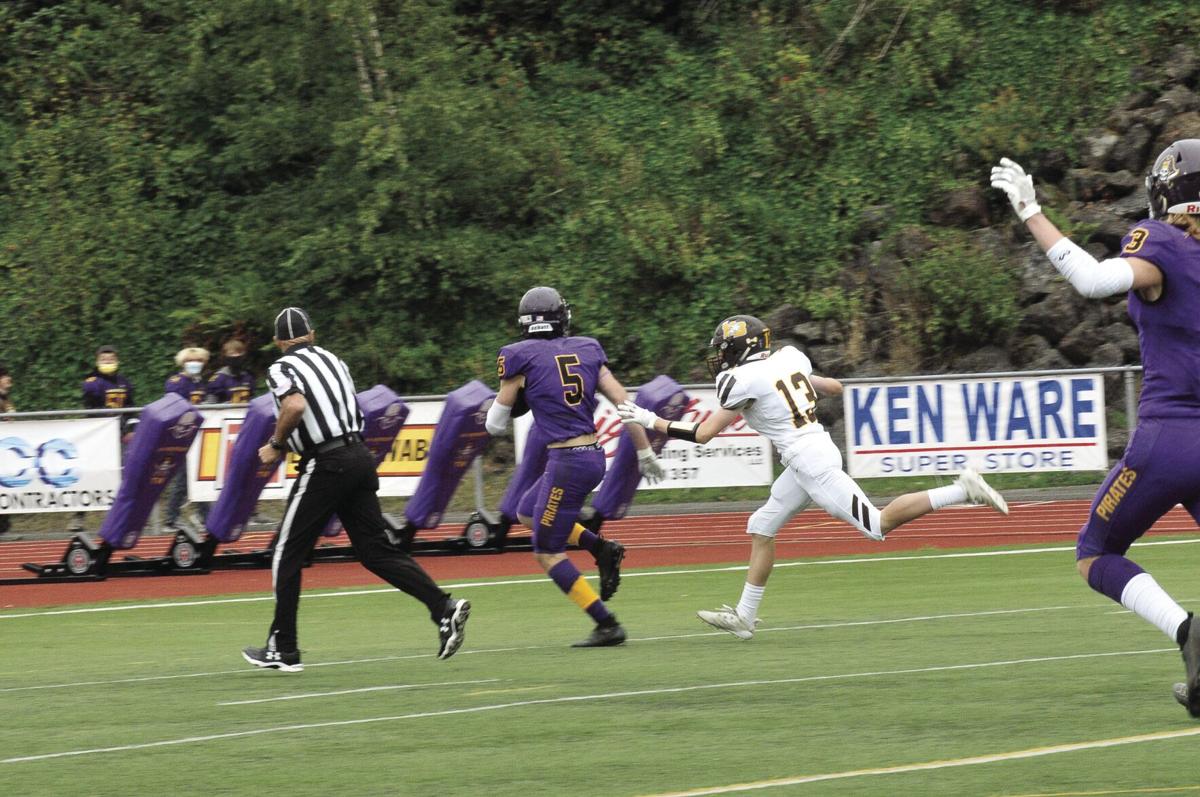 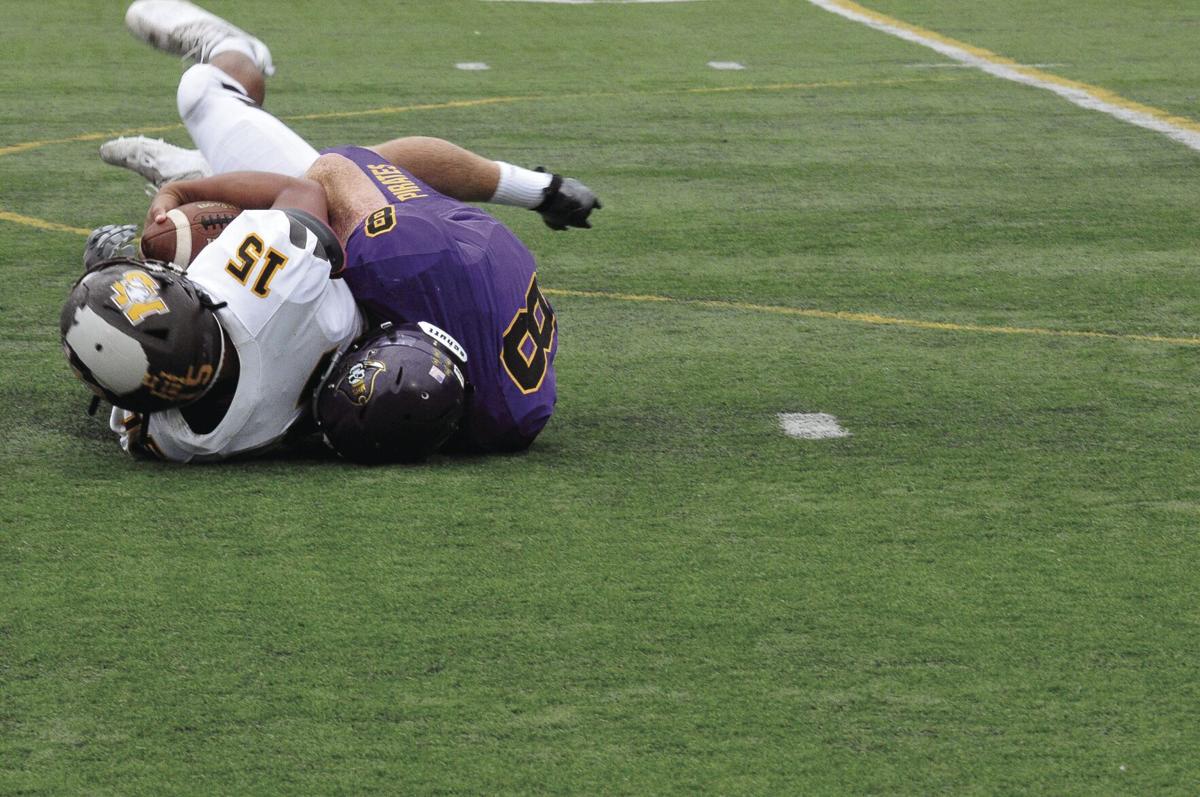 Marshfield’s Mitchell George sacks North Bend quarterback Craig Edera, one of a big number of tackles for loss by the Pirates during Saturday’s game. 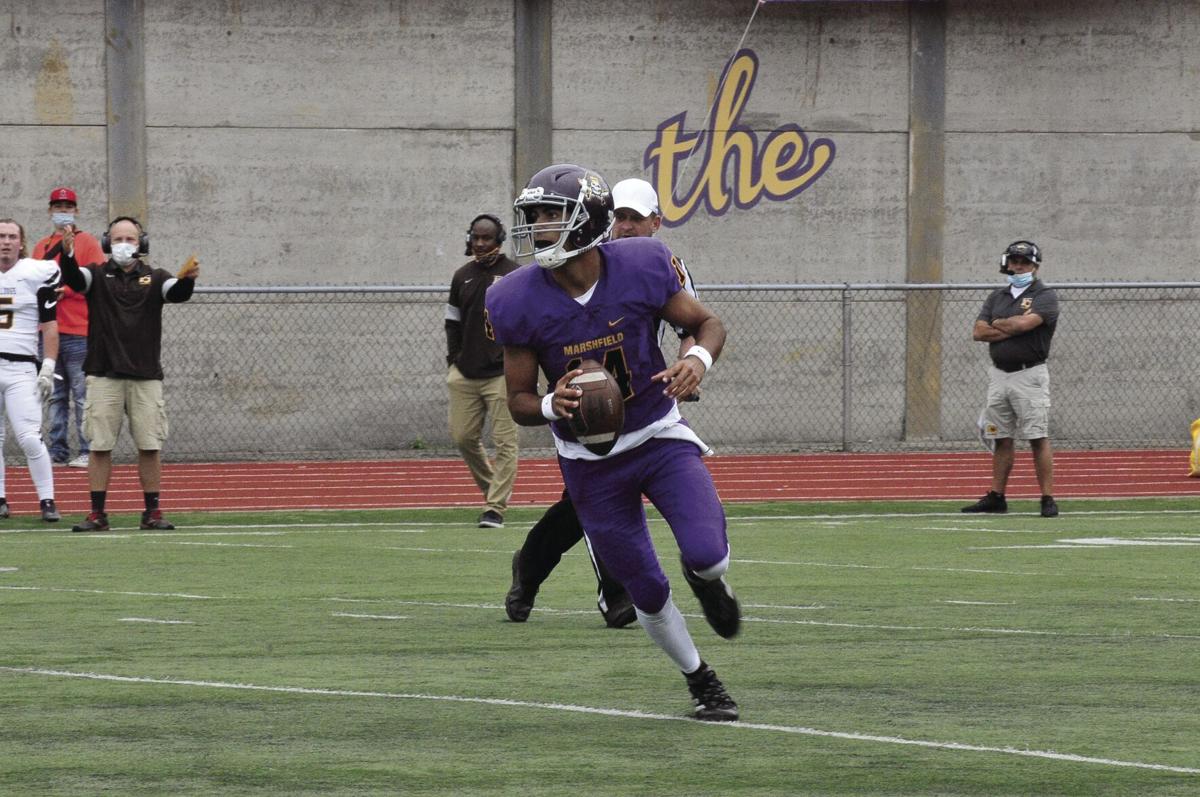 Marshfield’s Dom Montiel looks upfield for a receiver while scrambling during Saturday’s game. 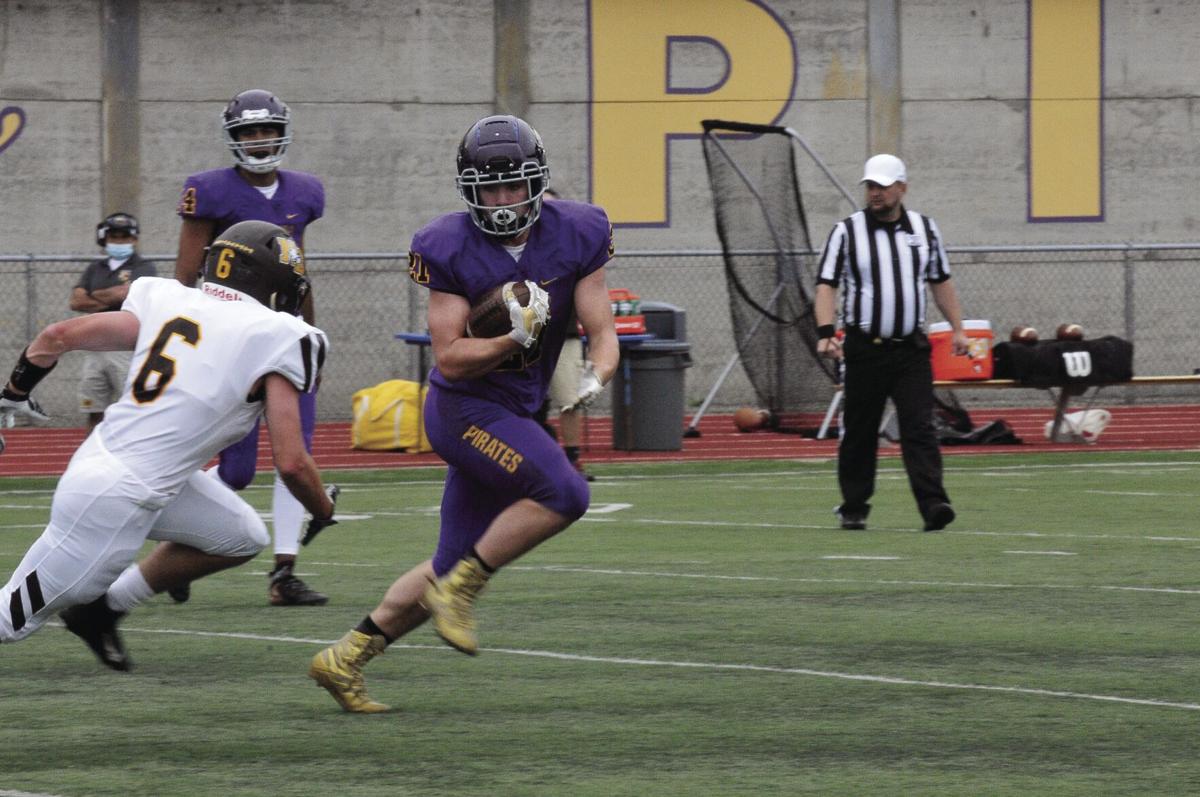 Miguel Velazquez looks to get around North Bend defender Hunter Wheeling for a gain Saturday. 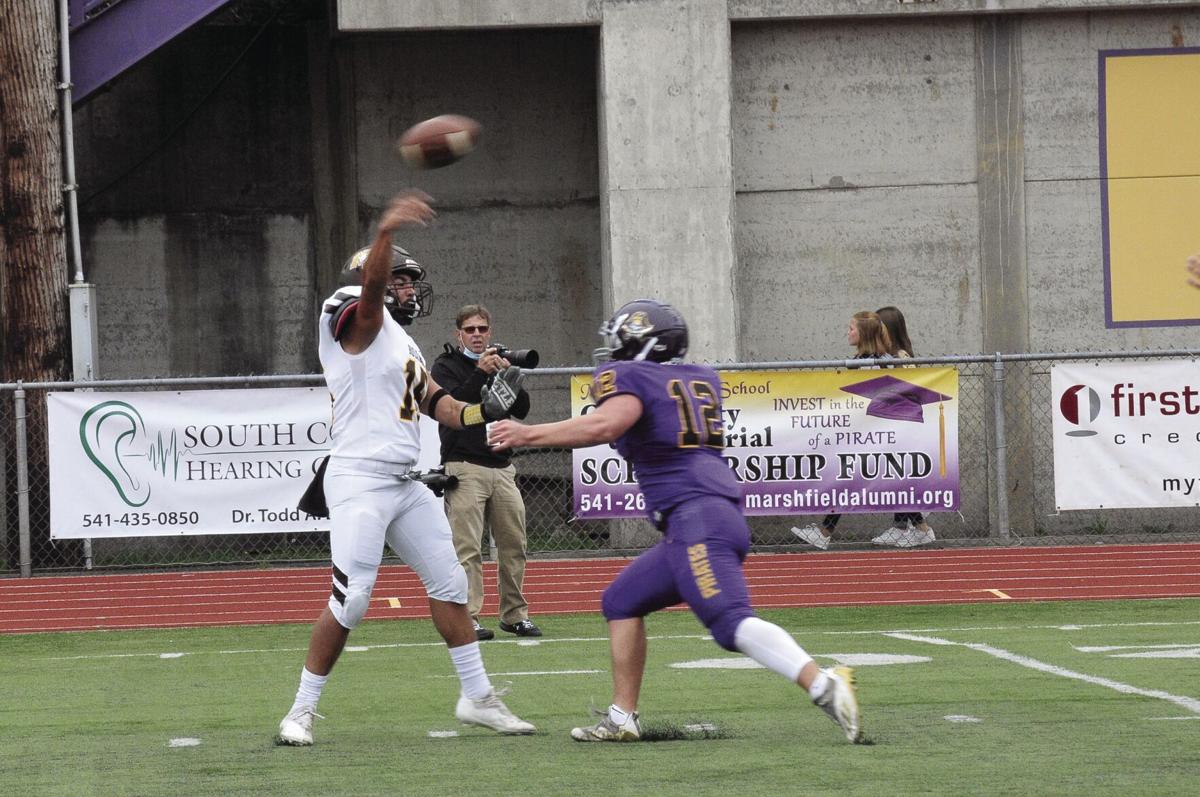 North Bend’s Craig Edera gets a pass off just before being hit by Marshfield’s Ezra Waterman on Saturday. 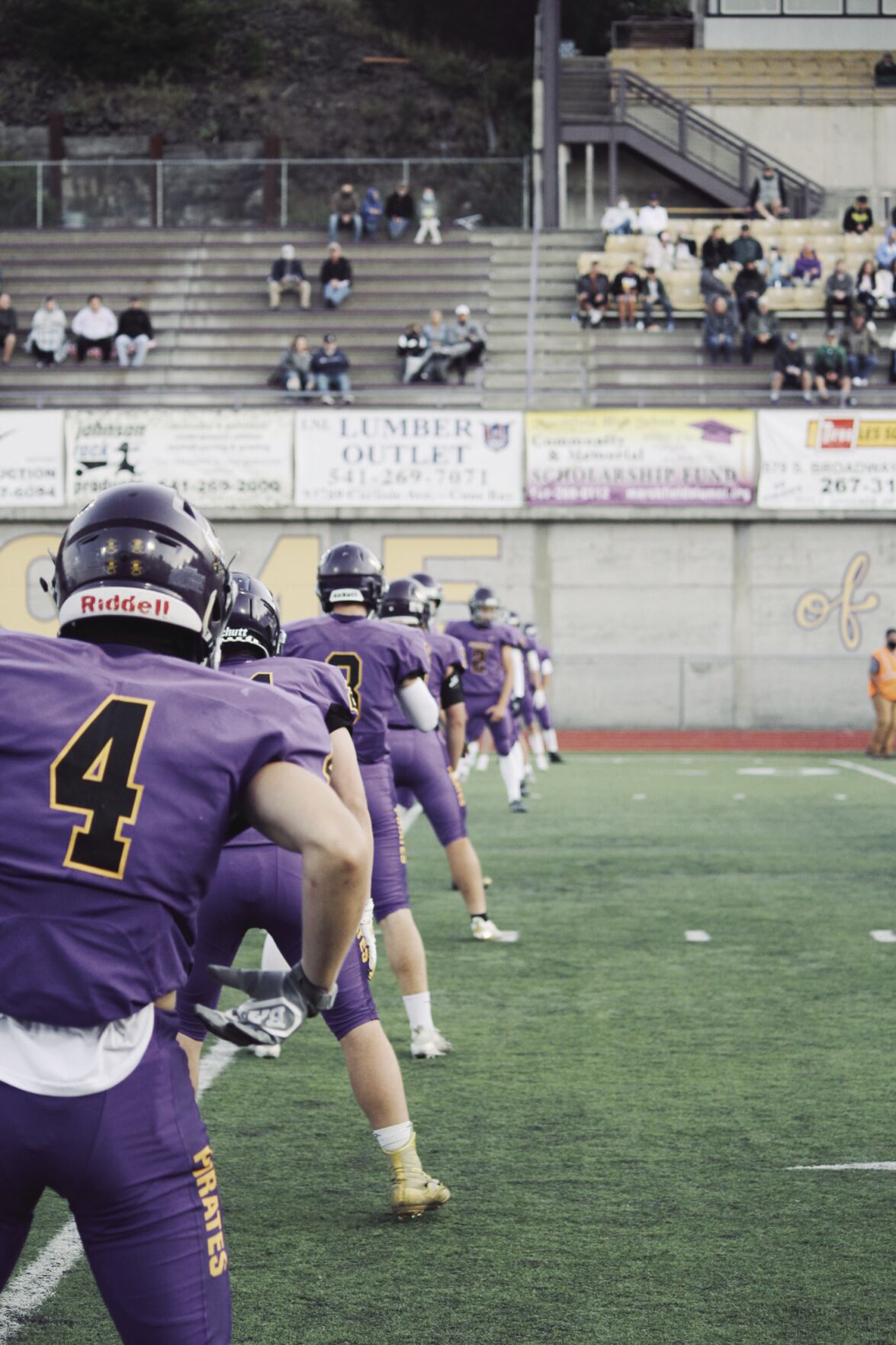 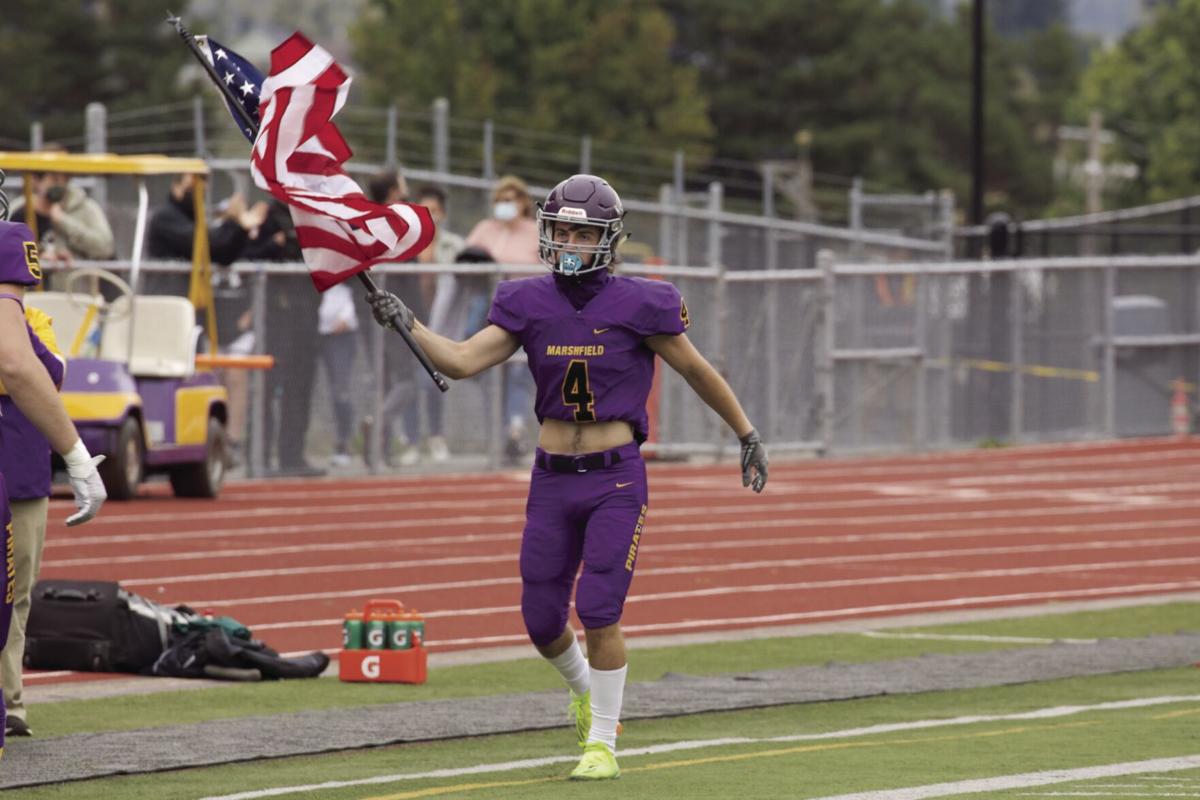 Marshfield’s Mitchell George sacks North Bend quarterback Craig Edera, one of a big number of tackles for loss by the Pirates during Saturday’s game.

Marshfield’s Dom Montiel looks upfield for a receiver while scrambling during Saturday’s game.

Miguel Velazquez looks to get around North Bend defender Hunter Wheeling for a gain Saturday.

North Bend’s Craig Edera gets a pass off just before being hit by Marshfield’s Ezra Waterman on Saturday.

The Pirates beat North Bend 55-6 on Saturday at Pete Susick Stadium in a game that was delayed a week due to a COVID-19 issue within North Bend’s program.

When the teams finally did face off, Marshfield dominated on both offense and defense.

The Pirates scored on every possession in the first half while building up a 55-0 lead and then let reserves go most of the way in the second half.

“I think the kids played with a lot of energy and had fun,” Marshfield coach John Lemmons said.

They were impressive on both sides of the ball in the first half. Marshfield had the first possession and got across midfield on the first play — a run by DJ Daugherty. There wasn’t another play run on Marshfield’s half of the field until the Pirates’ starters were on the bench and the running clock was in effect.

That was a result of quick scores by Marshfield’s offense and either tough defense or mistakes by the Bulldogs.

After a quick three-and-out by Marshfield’s defense and a short punt, the Pirates scored quickly again, this time with an 8-yard keeper by Montiel.

Next up were a pair of TD passes from Montiel to Daugherty — one for 5 yards and the other for 45, all the work done by Daugherty and downfield blockers after he received a short pass.

Montiel added another touchdown on a 14-yard run on a broken play and it was 35-0 through one quarter.

North Bend finally got its first first down on the first play of the second quarter, a scramble by quarterback Craig Edera.

But the Bulldogs weren’t able to get any momentum. Edera was jarred on a hit a few moments later and fumbled, with Ezra Waterman scooping up the ball and scampering 41 yards for another touchdown.

Marshfield still had time for two more scores before halftime, the first on a 21-yard run by Miguel Velazquez and the second on a fourth-down pass from Montiel to Mateski covering 35 yards.

Marshfield rested most of its starters throughout the second half.

“I was glad North Bend was able to step up and play,” Lemmons said, noting the Bulldogs’ issues with players in quarantine. “It wasn’t our goal to humiliate anybody.

“They’re our neighbors. I respect them.”

North Bend avoided the shutout when Edera connected with Kevin Jones on a 75-yard touchdown pass early in the fourth quarter.

That play totaled more than half of North Bend’s total offense for the day. Because of Marshfield’s numerous tackles for losses, the Bulldogs had minus-23 yards rushing and just 60 total yards. They also had just three first downs, one by a penalty.

The Pirates didn’t have overwhelming offensive totals — 157 yards rushing and 159 passing — but the defense put the offense in good shape much of the game.

“That’s incredible — the field position we have,” Montiel said. “It takes the pressure off me and the offense.”

And with as many weapons as Montiel has, that makes things tough on the opposition.

“It’s awesome,” Montiel said. “It keeps the defense on their toes.

On Saturday, Montiel only had seven completions, but they went to four different receivers. Pierce Davidson had a pair of catches and Mason Pederson had one.

And Velazquez and Waterman were both effective running the ball, which has been one of the focal points for the Pirates.

“If we can get the run game going, I don’t know how teams can stop us,” Montiel said.

Lemmons, too, was pleased to see Marshfield running the ball well.

“We finally got a little running game going,” he said. “That was good to see.”

The Pirates improved to 4-0 on the season. The comfortable margin of victory was refreshing after a challenging 18-6 win over Prairie High School of Washington last week.

“There was plenty of blame to go around offensively last week,” Lemmons said, listing drops by receivers, blocking mistakes by the line and poor throws by Montiel.

Most of those things were cleaned up Saturday.

Montiel was especially pleased with the line, which faced frequent blitzes by Prairie last week but held up well Saturday.

“To come back from what they did last week — they worked hard all week,” he said. “To give up no sacks and to be able to run the ball, it’s awesome.”

North Bend coach Gary Prince came away impressed with the Pirates, who have held the top spot in the Class 4A coaches poll the past few weeks.

North Bend had a few dropped passes, and one possible interception that was dropped. The Bulldogs weren’t able to make a good push against Marshfield’s defensive front to create running lanes consistently.

They knew coming in the game would be tough.

“Marshfield has a solid group of seniors who have been playing together a lot of years,” Prince said, adding “I know our kids wanted to compete better than this.”

The Bulldogs will try to quickly put Saturday’s game in the rear-view mirror.

“We’ve got to focus on getting back for Churchill,” he said of this week’s game, on the road Friday. “We still have some goals.”

Those include finding a way to make it into the Class 5A playoffs.

Marshfield, meanwhile, has one more nonleague game, at home against 1-3 Stayton on Friday night before embarking on the Sky-Em League season.

“I’m super excited,” Montiel said of the Pirates’ potential. “We are in rhythm.”