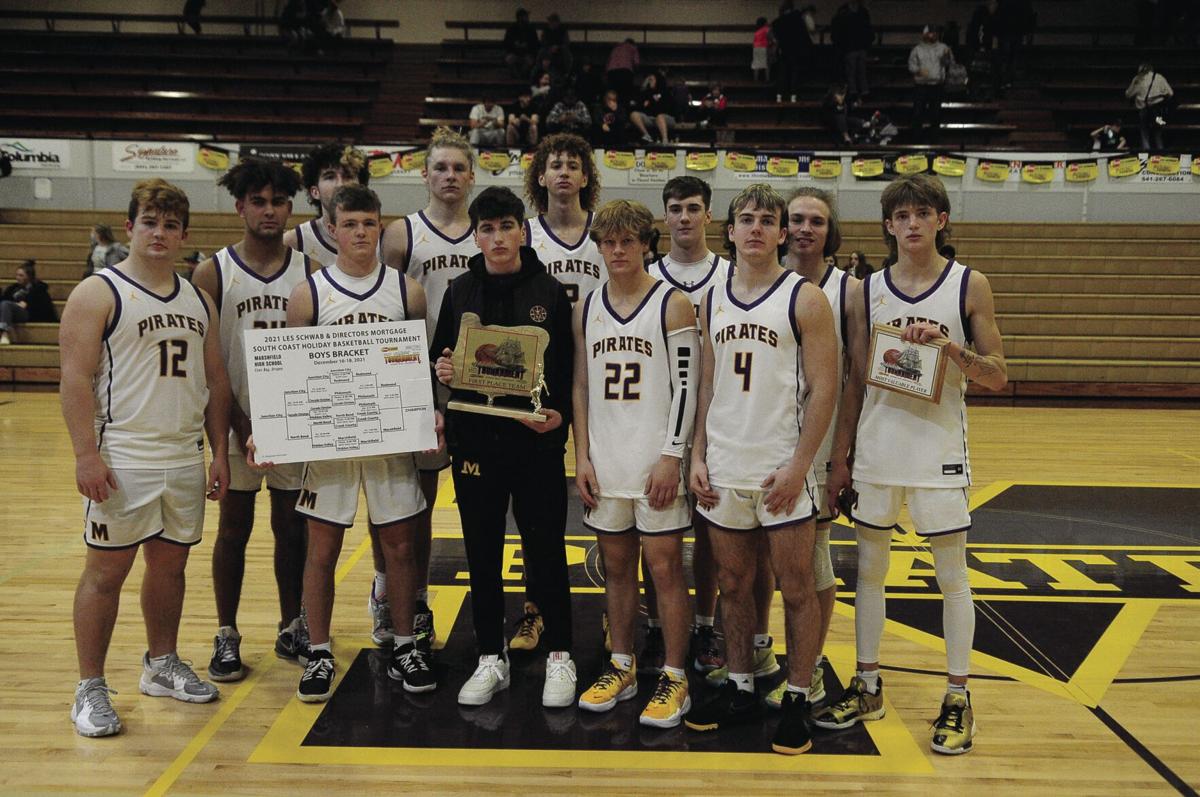 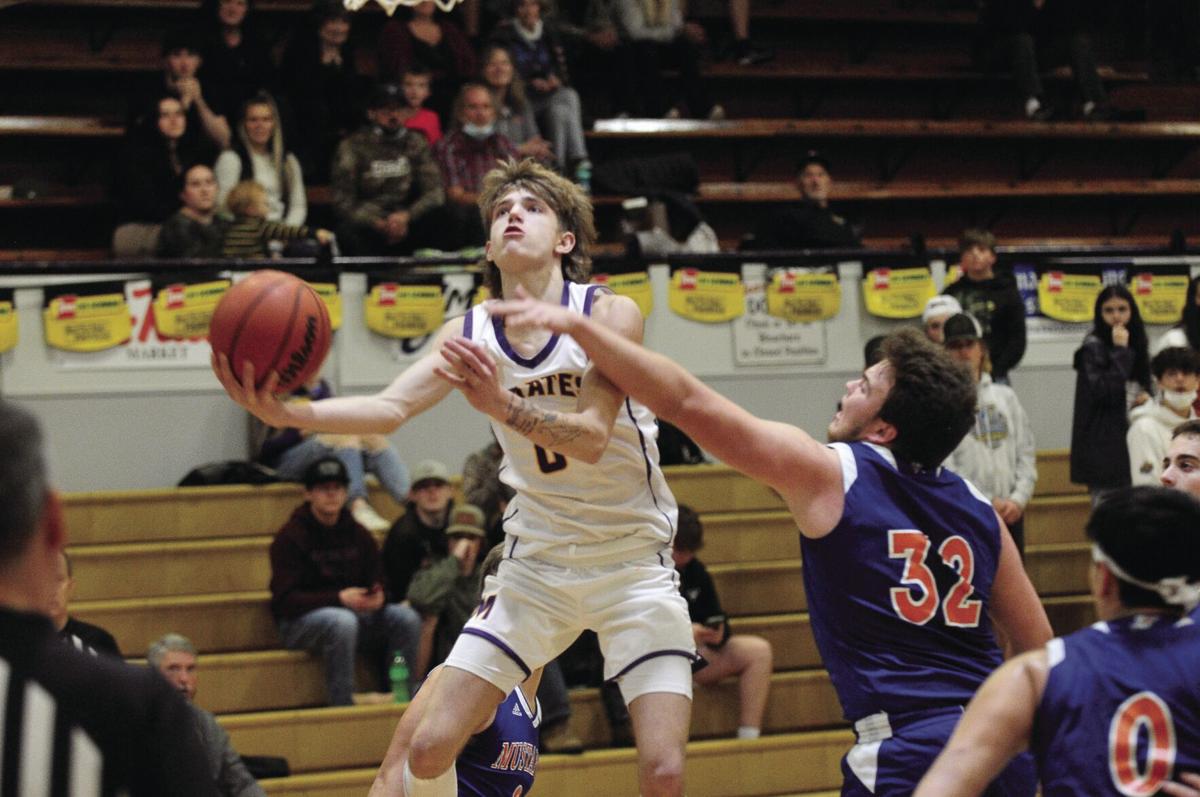 Marshfield's Mason Ainsworth drives to the hoop against Hidden Valley.

Marshfield's Mason Ainsworth drives to the hoop against Hidden Valley.

COOS BAY — Marshfield’s boys basketball team has built an impressive collection of wins while maintaining the top spot in the Class 4A coaches poll, including winning the Les Schwab South Coast Holiday Basketball Tournament over the weekend.

What might concern others in the Class 4A ranks is the Pirates are only getting better.

“The football players had their championship game and were late getting out for practice,” said Mason Ainsworth, the only regular in Marshfield’s rotation who wasn’t on the champion football team. “This tournament is the first time we really got into the swing of things.”

The Pirates topped Redmond 67-53 in the championship game Saturday, their fifth win over a Class 5A or Class 6A team this season. Their lone loss, to Crescent Valley (another Class 5A school) helped spark the team to get better.

Saturday’s win showed how far the Pirates have come and ways they are even better than the team that won the Class 4A showcase event to conclude the short spring season in June,

Marshfield is a better rebounding team, led by Pierce Davidson, Maddux Mateski and Monty Swinson. The same players helped cause Redmond to have a poor shooting night, limiting the open looks for the Panthers.

“One thing we talked about before the game was winning 50-50 balls,” McCord said, referring to rebounds of balls that were loose on the floor. “We did that. The guys were getting down on the floor.”

Throughout the season, Marshfield also has shown multiple players are capable of scoring big points in any given game, led by the explosive and creative Ainsworth.

In the first quarter, while Marshfield’s other players were missing open looks, Ainsworth was hitting his, be they 3-pointers or drives to the basket.

He scored Marshfield’s first 12 points and the only points by a teammate were three free throws by Swinson, who was fouled on a long shot from the corner at the buzzer.

Ainsworth also was central to perhaps the biggest stretch of the game.

Redmond cut Marshfield’s lead to one point late in the third quarter and the Pirates missed a shot with the rebound caroming to a member of the Panthers. But one of Marshfield’s players tapped the ball instead to Ainsworth, who was fouled while making a jumper in the lane. He made the free throw for a three-point play, dished a perfect pass to a driving Davidson for an easy basket the next time down and then added a 3-pointer from well beyond the arc after a Redmond miss.

Marshfield suddenly had a nine-point lead and was in control the rest of the way.

“It’s huge when we can get some baskets and get back on defense and get stops,” Ainsworth said, adding that such stretches are huge for momentum.

By the end of the contest, Mateski had 11 points, Davidson nine, Montiel seven and Swinson six.

Ezra Waterman, always the first off the bench, played his role as defensive sparkplug well, contributing a number of hustle plays and grabbing several rebounds. Mason Pederson also played a few steady minutes off the bench.

While the other players on Marshfield’s roster — all the Pirates are seniors — didn’t get into the championship game, McCord went down the bench as the clock wound down telling them they also are a huge part of Marshfield’s success.

Garrett Osborne had 19 points and Nate Wachs 14 for Redmond.

Osborne and teammate Evan Otten were on the all-tournament team, along with Ainsworth and Montiel from Marshfield, Philomath’s Ty May and Crook County’s Eddie Freauff.

Marshfield improved to 7-1 and Ainsworth said the Pirates can be much better than the team that won the showcase title last spring.

“All of us have matured — both mentally and physically,” he said.

The Pirates were on a mission to win the tournament this year, after losing in the championship game when the current seniors were sophomores (last year’s event wasn’t held because of the season being moved to the spring).

“This was our last one,” Ainsworth said. “It was really important to come out as a team and get it done.”

Marshfield opened the tournament with an 80-39 win over undermanned Hidden Valley, which dressed just five players.

Ainsworth had 22 points in that game — all in the first half. Regular reserves DJ Daugherty and Ben Mahaffy added 12 and 10 points, respectively.

The Pirates beat Crook County 84-66 in the semifinals. Ainsworth had 27 points, Montiel 20, Swinson 14, Davidson 10 and Mateski nine against the Cowboys.

The result was the tournament victory that eluded the Pirates two years ago.

“This was a fun tournament,” Ainsworth said.

The Pirates now have a break until facing North Valley on Dec. 27.

“We’ll get some good practices in over winter break,” McCord said, noting “We’ve had about as many games as practices.”