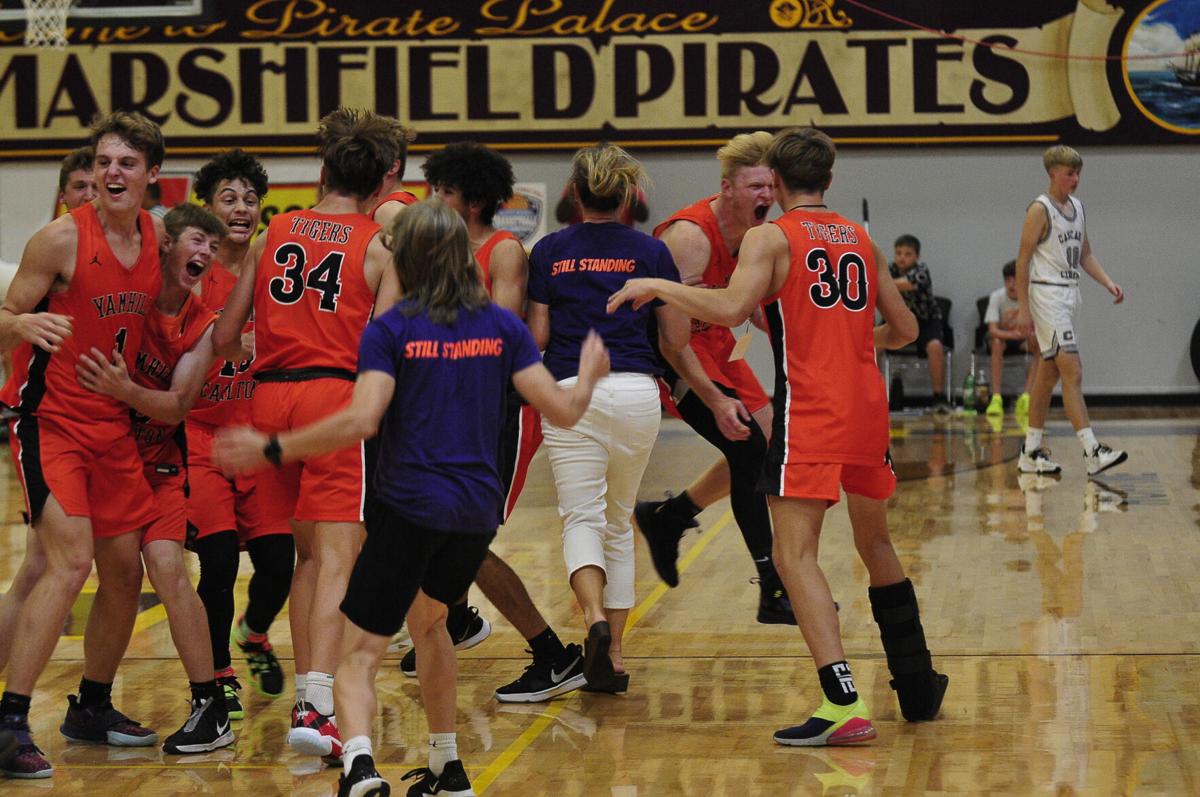 Yamhill-Carlton's players and coaches celebrate their win over Cascade Christian in the Class 3A championship game at Marshfield on Friday. 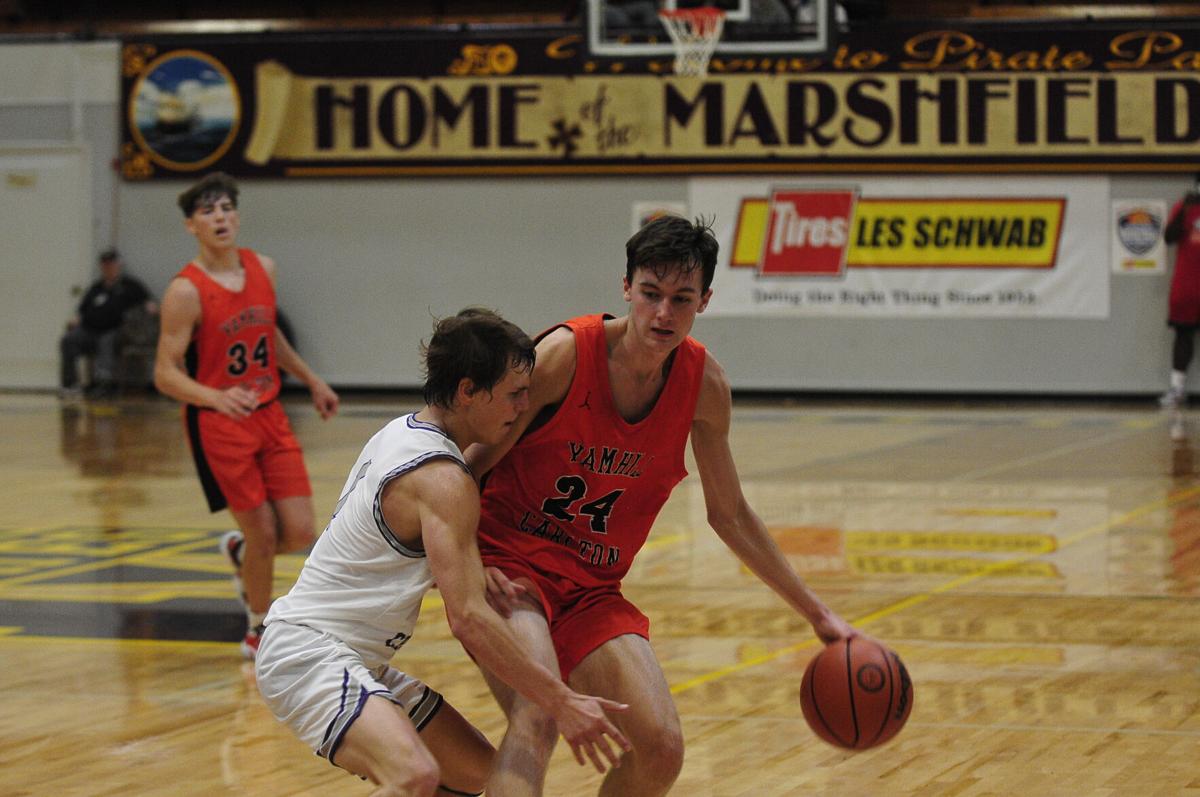 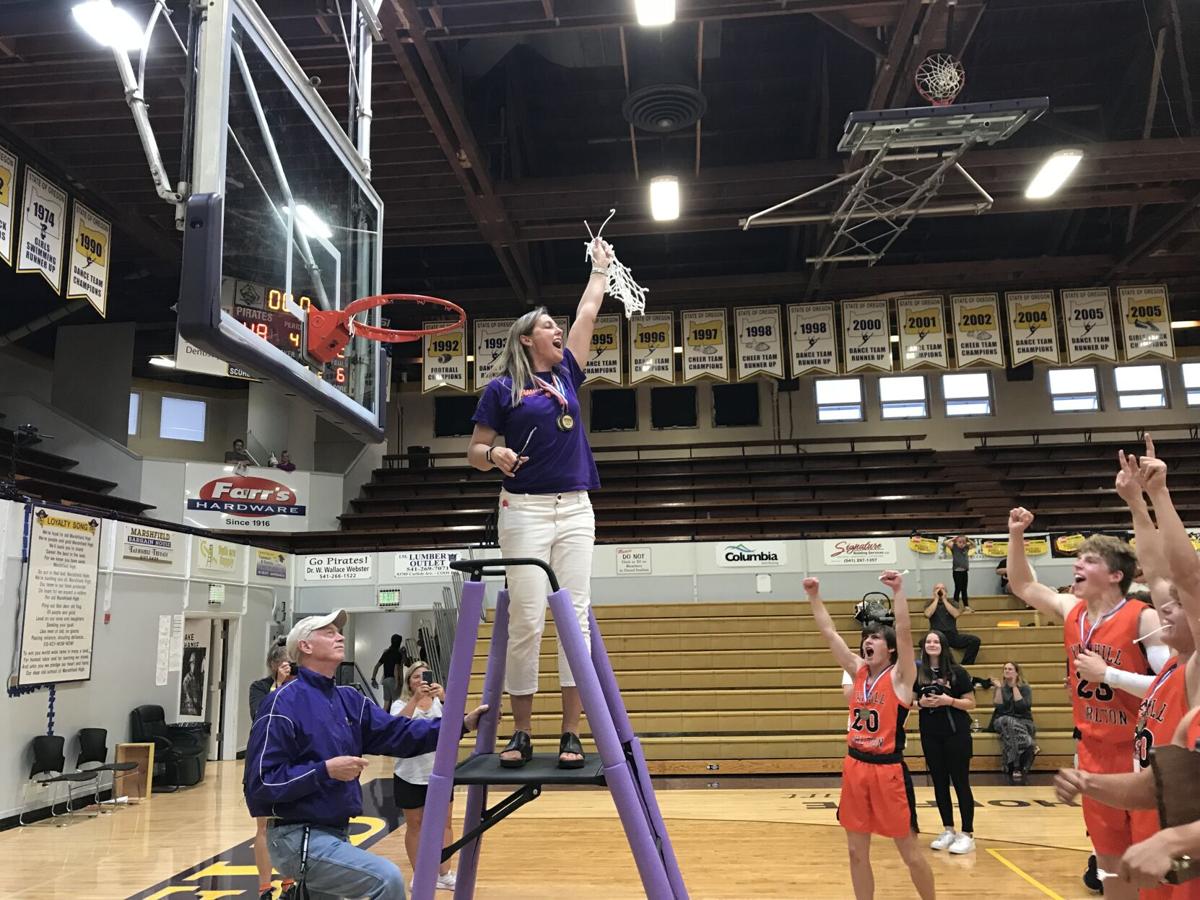 Yamhill-Carlton coach Heather Roberts waves the net after cutting it down following the Tigers' win over Cascade Christian on Friday.

Yamhill-Carlton's players and coaches celebrate their win over Cascade Christian in the Class 3A championship game at Marshfield on Friday.

Yamhill-Carlton coach Heather Roberts waves the net after cutting it down following the Tigers' win over Cascade Christian on Friday.

COOS BAY — Two years ago, Yamhill-Carlton didn’t beat any other Class 3A teams. Now the Tigers are state champions.

High-scoring sophomore twins Moroni and Malachi Seely-Roberts combined for 50 points as the Tigers won their first boys state title since 1992.

Cascade Christian built a 32-21 halftime lead by limiting the Tigers to six points in the second quarter.

That led to a heart-to-heart talk in the locker room when Roberts challenged her team.

“We talked about how we’ve worked hard, and just because you beat De La Salle (in the semifinals Thursday), it doesn’t matter if you give this up.

Roberts also switched up the offense, which was necessary because of how well the Challengers were playing.

“They did a great job,” Roberts said. “They really had us stymied.”

The coach moved Spencer Horne to point guard, which opened up more offense for both twins.

Malchi Seely-Roberts had 11 points in the third quarter and Moroni had eight as the Tigers trimmed the Challengers’ lead to one.

They each scored six more in the fourth as Yamhill-Carlton pulled in front and held on.

“We came out with a lot of fire (in the second half),” she said. “Defensively, we really stepped up.”

Cascade Christian coach Brian Morse had nothing but praise for his team’s effort. The Challengers were outsized at every position on the floor but battled the Tigers throughout.

“My guys locked in on the game plan,” Morse said. “We knew if we could keep them in the 50s, we had a chance.”

He said his defense, led by junior guard Cody Reece, was the best in the state this spring and that continued Friday.

“I was so proud of my guys,” Morse said. “They gave me everything I asked them to do.

“The twins were too good at the end and we had a few crucial turnovers.”

Roberts said she is excited to be part of history as a woman coaching a boys team to a state title. When she became boys coach in 2017 (she had coached girls for a number of years), she was the first since a female coach at Thurston in 1938.

Coaching the boys isn’t a novelty anymore, though. She’s the only head coach the current players have had, so it’s normal for them, she said.

She was more excited for the Tigers to get a state title.

She also praised Marshfield athletic director Greg Mulkey and the other tournament organizers from Marshfield, North Bend and the Bay Area.

“With OSAA not running state tournaments (this year), I thought Marshfield High School really stepped up,” she said. “It felt like as much of a real season as it could.”