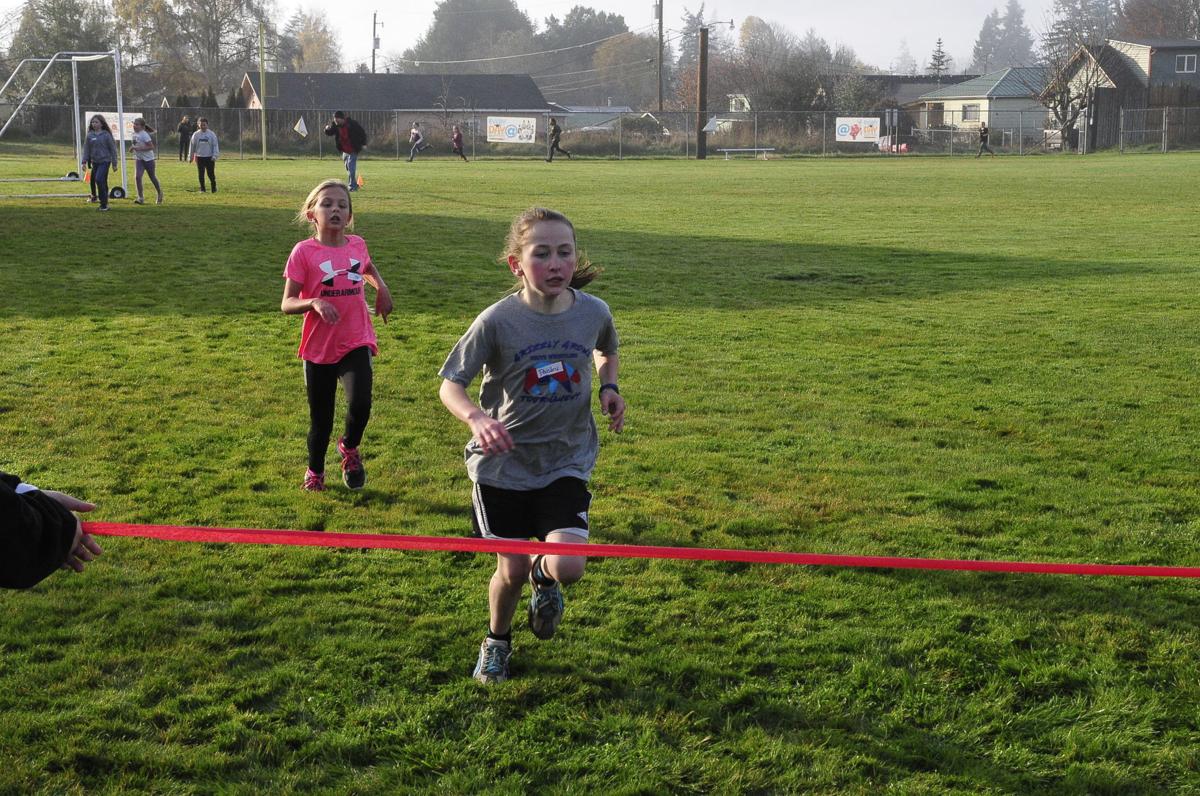 Paisley Morrison edges out Ella Henthorn for first place in the girls race at the turkey trot in Coquille on Monday. 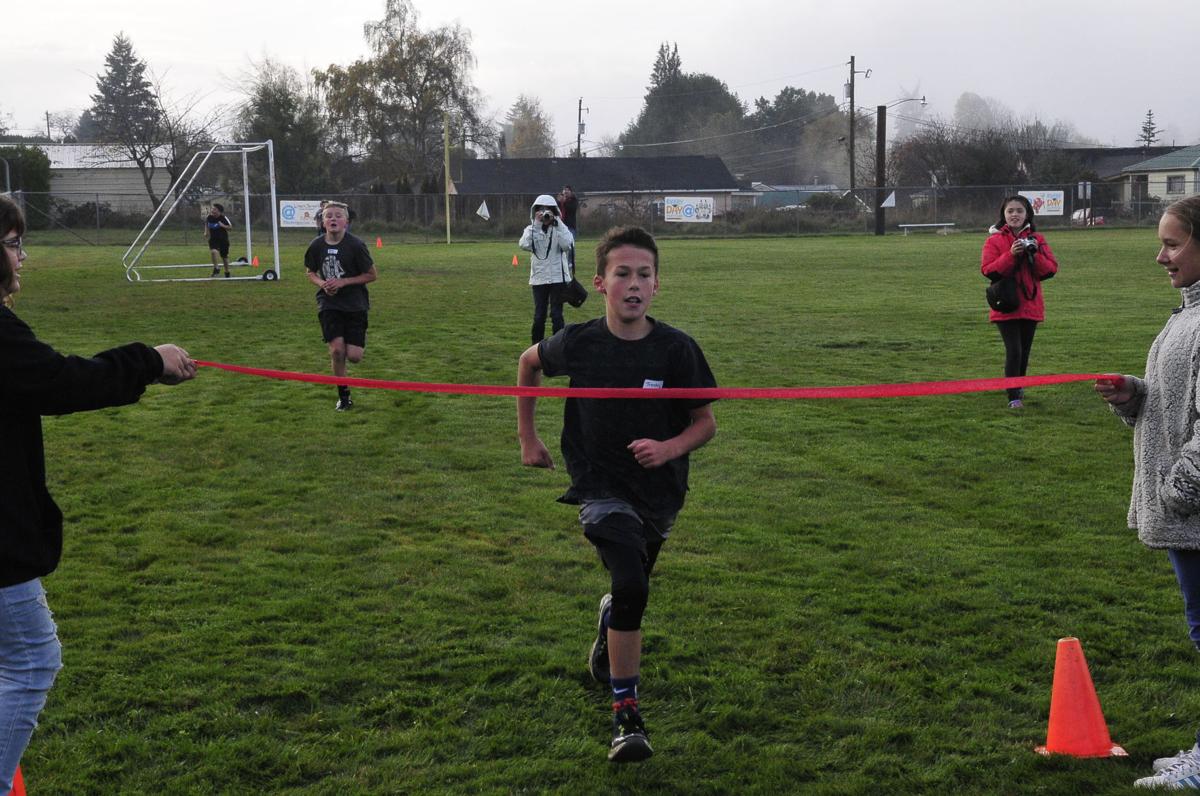 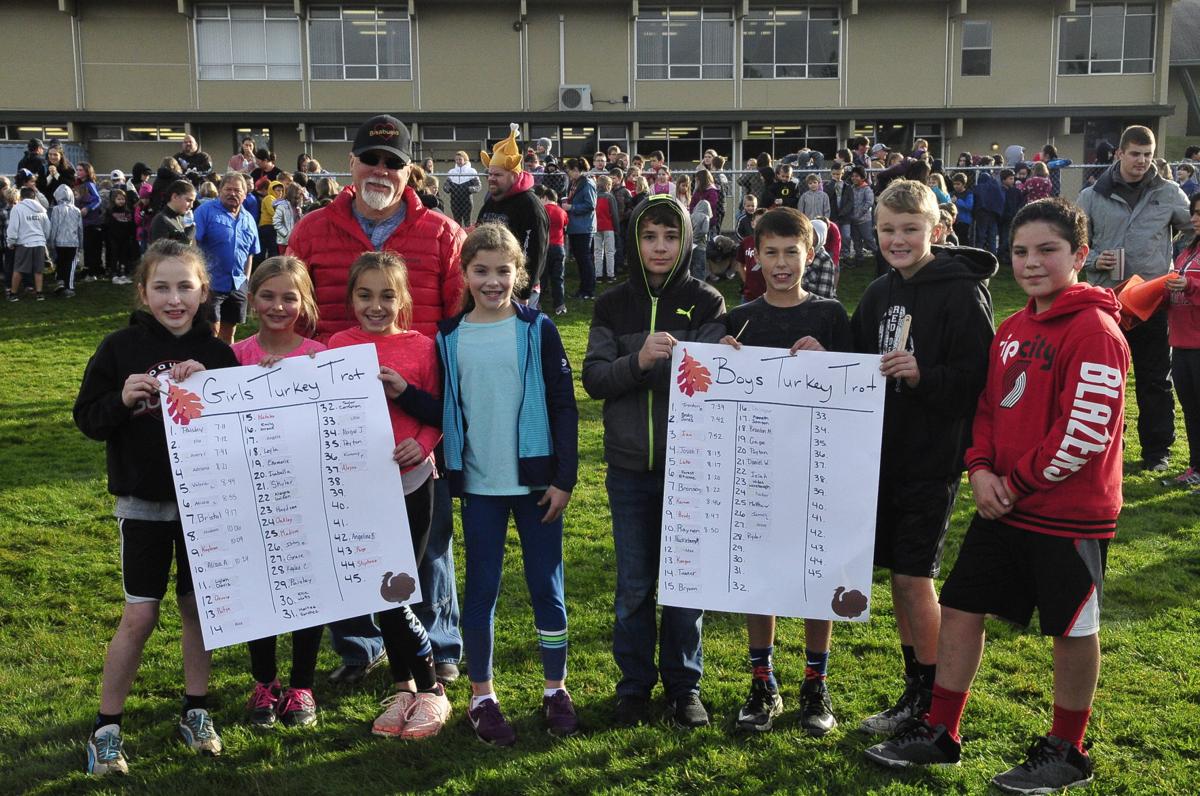 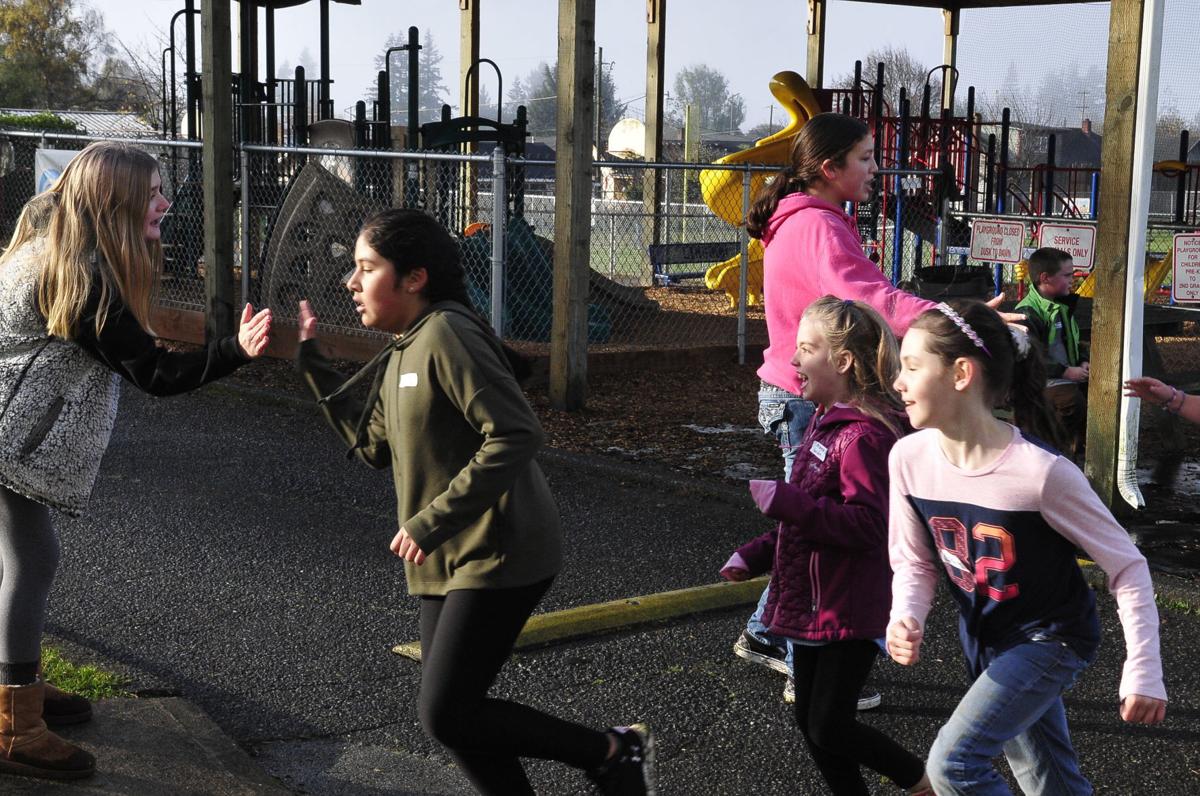 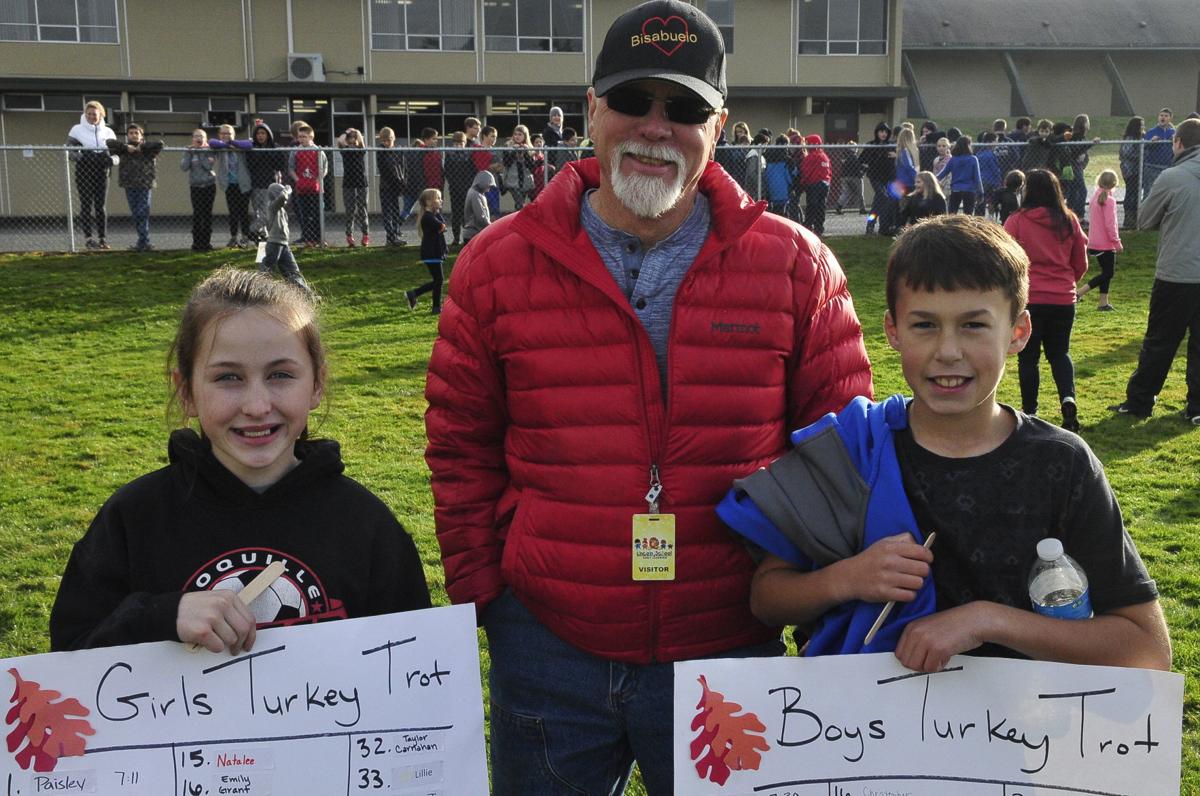 Turkey trot winners Paisley Morrison and Trenton Backman pose for pictures with Chuck Calley, who started the annual tradition in 1980.

COQUILLE — In 1980, teacher Chuck Calley gathered his fourth- and fifth-grade students in Coquille for a 1-mile race just before the Thanksgiving holiday.

He got the idea when his own son, Rob, ran a similar race at North Bay School and finished near the top, gaining confidence for the first time that he could be a successful distance runner.

Rob Calley went on to be a two-time state champion for Coquille during a stellar high school career — once in cross country and once in the 3,000 meters during track and field.

And Chuck Calley’s turkey trot became a mainstay in the Coquille School District that marked its 40th edition on Monday, when the fourth- and fifth-graders from Coquille Valley Elementary ran a course that twice looped Fortier Field and the school building at the Lincoln School of Early Learning.

“I’m pleased that it’s been carried on by generations of teachers,” said Chuck Calley, who retired 17 years ago and was among the crowd that included students and parents cheering for this year’s runners.

When he started the turkey trot, Calley viewed the run as a way to turn kids on to the sport of running.

“There weren’t a lot of opportunities 40 years ago,” he said.

He settled on the mile distance because it’s a challenge for the elementary school kids.

“It takes a lot of heart to run this far,” he said.

During Calley’s tenure, he taught at all three of the in-town elementary schools in operation four decades ago, holding the race at Lincoln Elementary, at Jefferson Elementary and at Washington Elementary when he was teaching in those respective buildings.

The Lincoln course was always his favorite, with the grass of Fortier Field and the terrain of a gentle hill on the trek around the school to make it feel like a cross country course.

Now all the elementary students are in Coquille Valley Elementary a few blocks away, and they walked to Lincoln on Monday morning. As the runners circled the course, the younger students cheered along Fortier Field and the students from the Lincoln School of Early Learning cheered behind the school.

Several of the sixth-graders, now too old to participate, helped out along the course, showing the runners where to turn.

Coquille Valley Elementary Principal Geoff Weatherell said that when he started at Lincoln he quickly learned the significance of the run.

The top four finishers for the girls and boys in Coquille's turkey trot pose with Chuck Calley, who started the annual event in 1980. They inc…

When the elementary school kids were moved to the former Coquille Valley Middle School building, they would ask him when the turkey trot was, clearly showing their desire for it to continue, Weatherell said.

“We have a big trophy (with the winners),” he said. “The kids look at it all the time.

“It’s difficult to get the second- through sixth-graders all excited about something. This is it.”

Calley said having the younger students cheer on the runners keeps them excited for when it’s their turn.

“That will build the fever for the next year,” he said.

For Calley, Monday’s run was a reunion of sorts.

Children, and in some cases grandchildren, of past runners were in this year’s race.

Holli Henthorn, herself a former turkey trot winner and state champion for the Red Devils, was there to watch her daughter, Ella, run and was among the parents reconnecting with Calley.

“It was a lot of fun,” Henthorn said of watching Ella and the other kids. “It brings back good memories.”

Both the individual races were close on Monday.

In the boys race, Trenton Backman finished three seconds ahead of Brody Jones, winning in 7 minutes and 39 seconds. Ian Frost was third in 7:52 and Josiah Flores fourth in 8:13.

Backman was eighth a year ago when he was a fourth grader.

“I just paced myself and tried hard,” he said. “It was my last year, so I wanted to win it.”

In the girls race, Paisley Morrison edged Ella Henthorn in a sprint to the finish, winning in 7:11, to 7:12 for Henthorn. Avery Johnson was third in 7:48 and Adriana Lucatero fourth in 8:21.

“I’ve never run that far,” said a proud Morrison after the race, though she added that she gets good training for running as a member of the town’s club wrestling program.

Both the winners said they remembered watching the race when they were younger students and looking forward to their chance to participate.

A total of 40 girls and 31 boys participated in the race.

Before the race, Weatherell reminded all the participants and the students watching them about the most important element of the event.

Turkey trot winners Paisley Morrison and Trenton Backman pose for pictures with Chuck Calley, who started the annual tradition in 1980.

“It’s a good way to celebrate and have a lot of fun,” he said. “Sportsmanship is important. We need to be kind to each other as we run.”

And keeping in the tradition started by Calley, all the students are considered winners.

All the runners receive a chicken bullion cube, while the top four finishers in each race receive bigger prizes — a turkey for the winners, a chicken for the second-place finishers, a game hen for third and a dozen eggs for fourth.

“Everyone’s a winner,” Calley said. “The kids feel a little brave (to run that far). It’s a challenge.”

A challenge that has been going on for four decades.