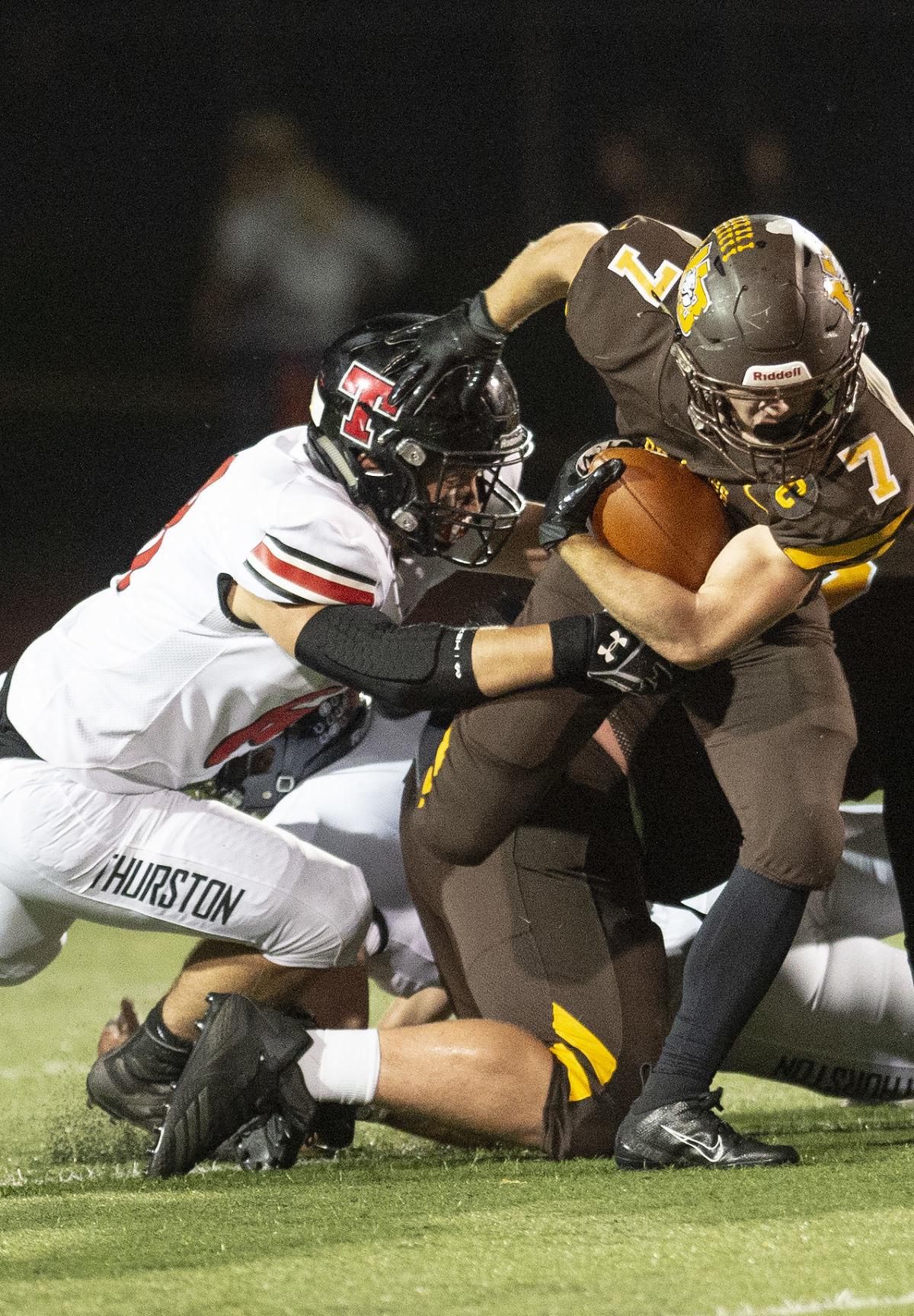 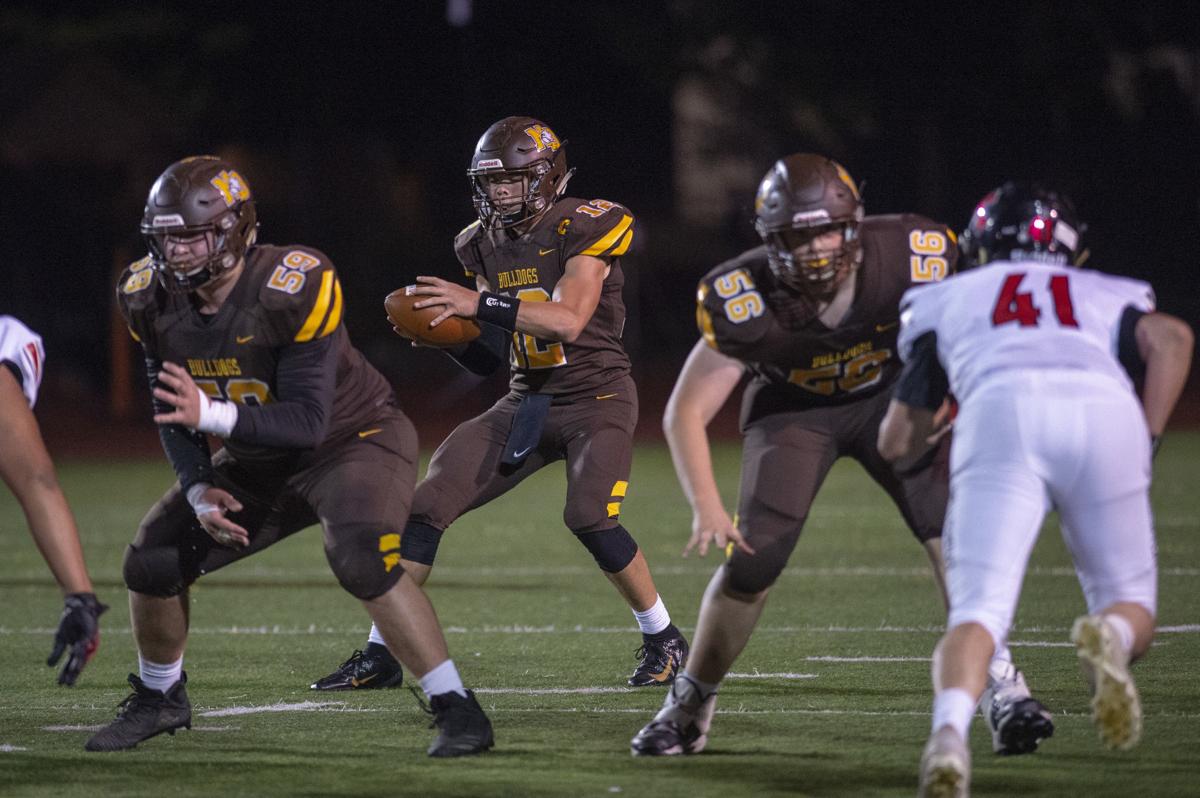 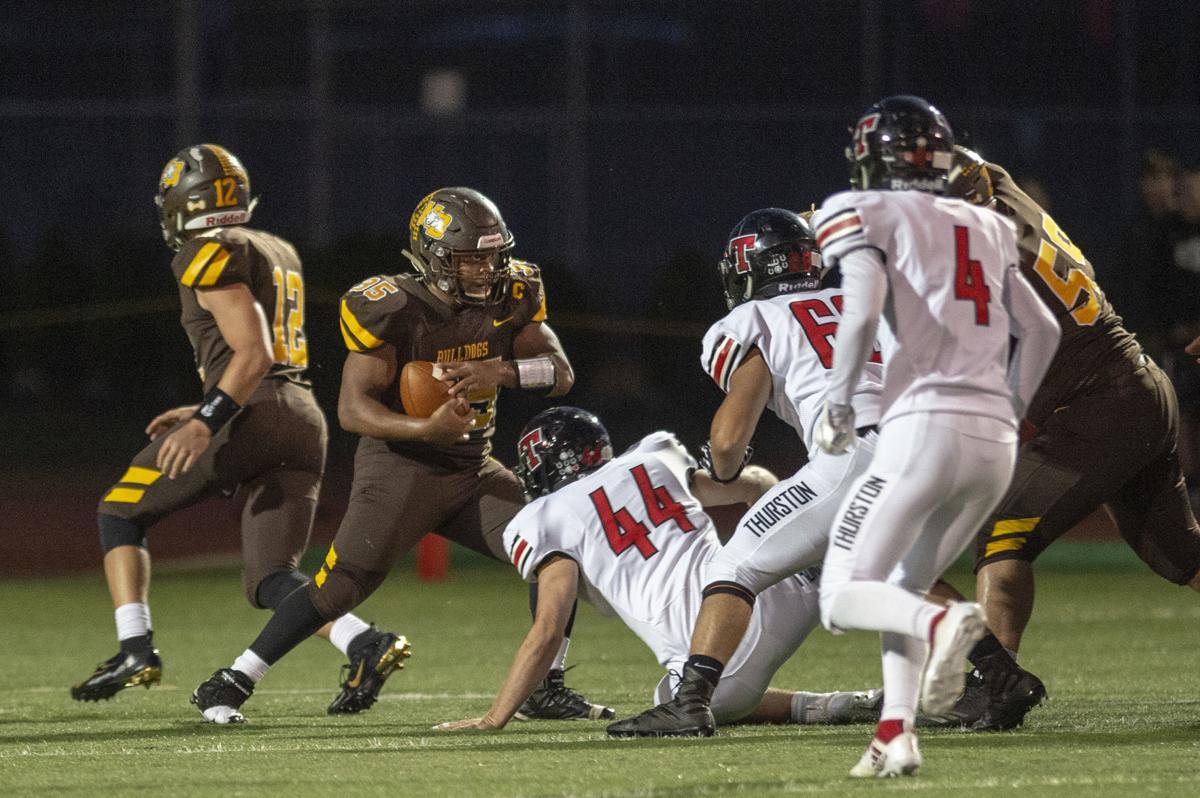 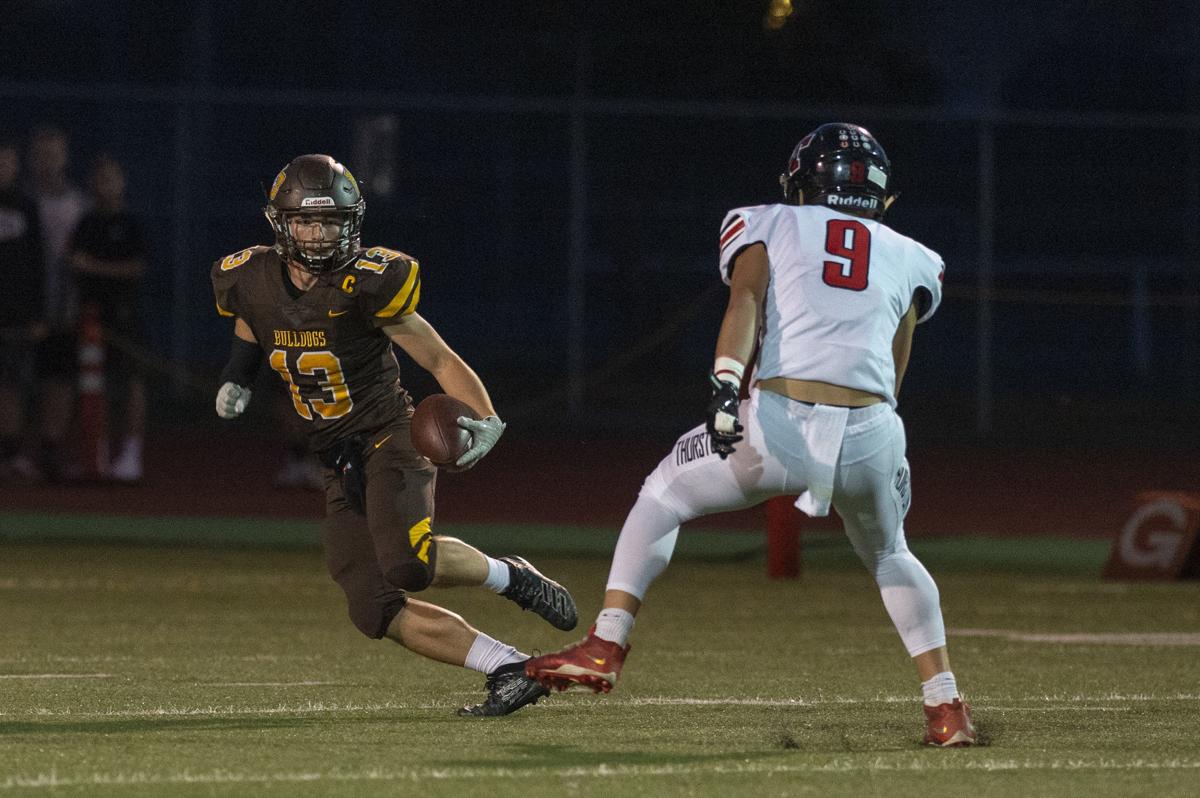 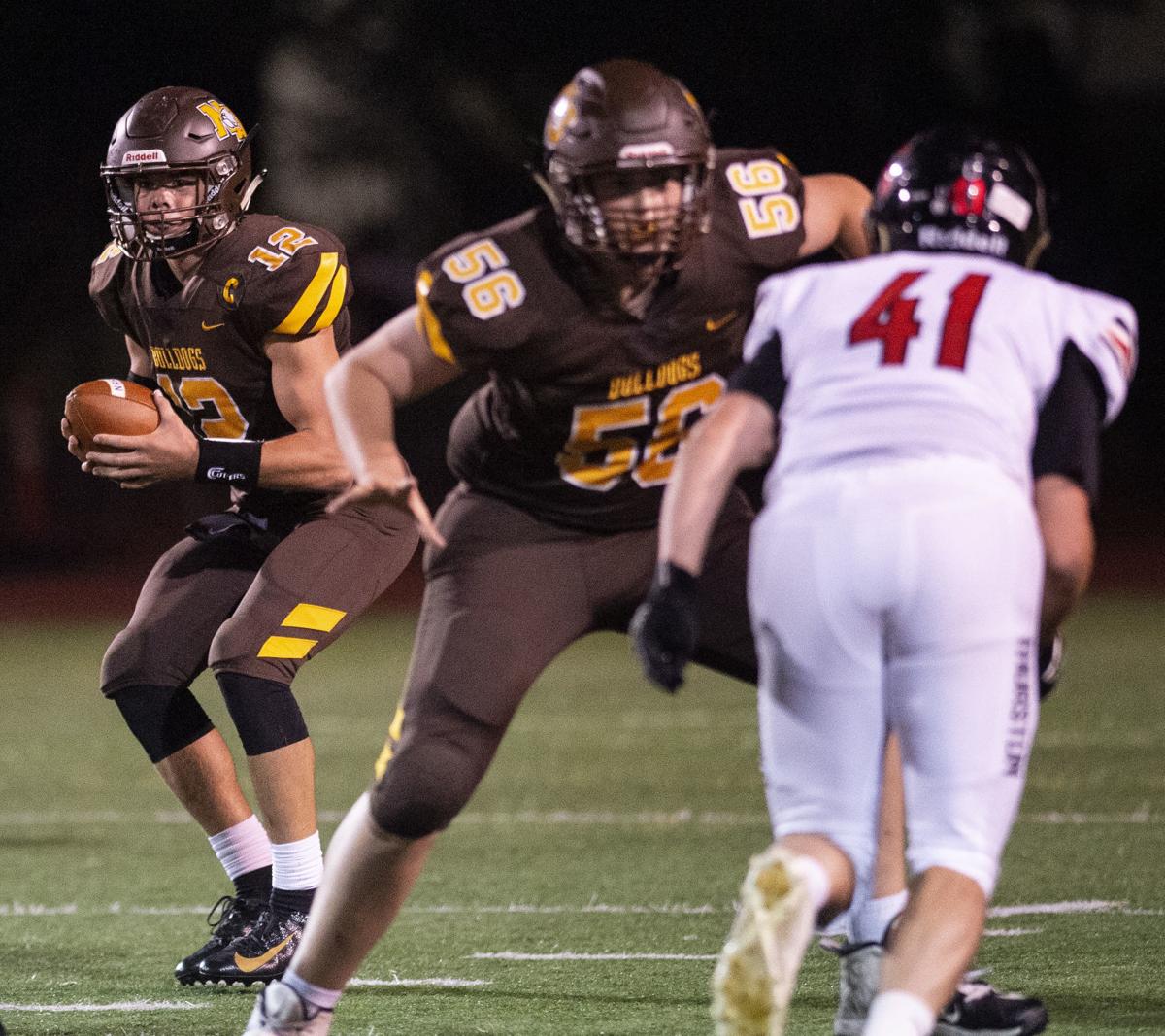 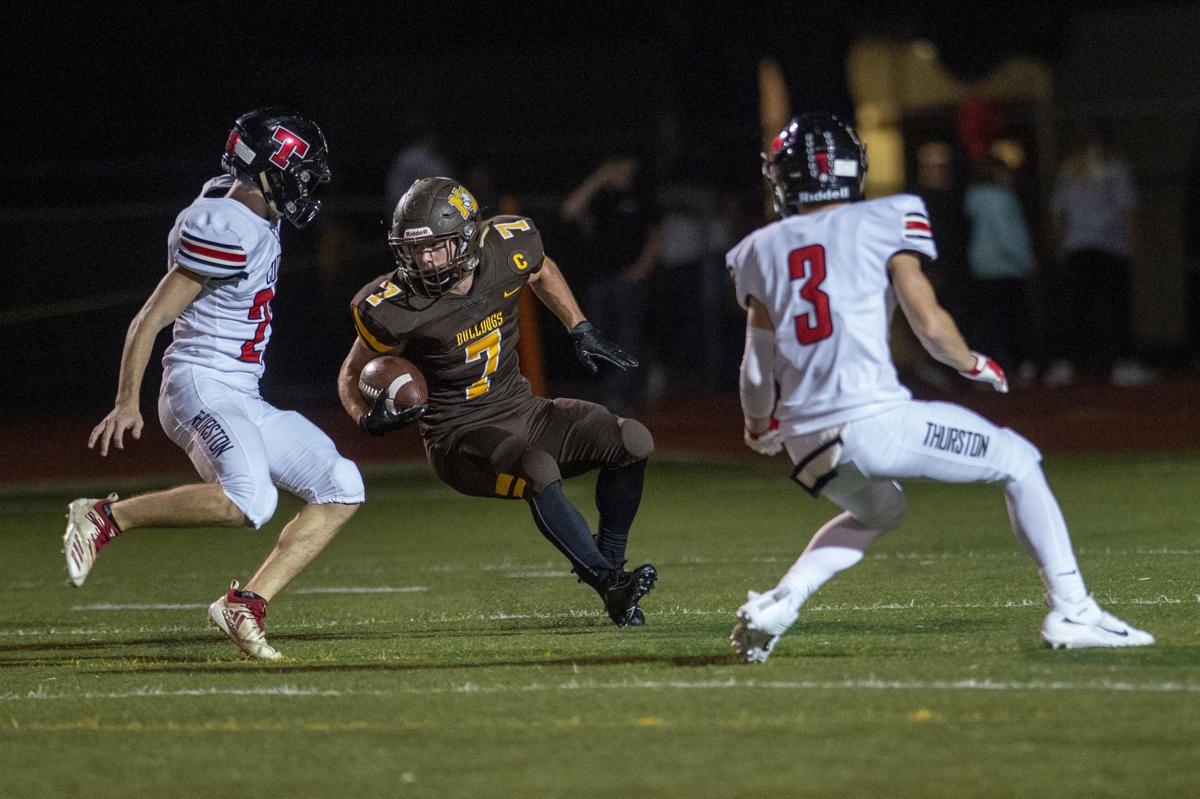 NORTH BEND — The defending Class 5A state champions were not going to be stopped on Friday night at Vic Adams Stadium.

A week after third-ranked Crater defeated North Bend, the schedule didn’t get any easier for the Bulldogs this week as it was No. 1 ranked Thurston coming to town. Using a strong second half —and overcoming 155 yards of penalties — the Colts walked away with a 43-17 victory against North Bend.

“(Our team) wants to compete a little better so they’re not in the happiest of places right now and I wouldn’t expect them to be after a game like that. I mean, it’s a tough opponent. We knew they were going to be tough,” said North Bend head coach Gary Prince. “I think we would like to play a little better, but it was just difficult to do tonight.”

The game started on the right foot for the Bulldogs after an opening defensive stop followed by a score on the first possession as quarterback Ian Spalding found Coleman Compton, who raced his way to a 60-yard touchdown. North Bend did not score another touchdown until Spalding’s 9-yard rush in the closing minutes of the fourth quarter. In between those scores, it was Thurston outscoring the Bulldogs 43-3.

It was Thurston’s defense creating problems for the Bulldogs all night. North Bend finished with 279 yards, with 163 of those yards coming on the first and last drives of the game. Spalding finished 9-for-20 passing for 204 yards with one touchdown and an interception.

The rushing attack was constantly stopped at the line, often with the help of Thurston’s defensive ends Brian Jenkins and Grant Starck who are 6-foot-4, 280 pounds and 6-foot-5, 290 pounds, respectively. Additionally, North Bend’s offensive line saw two new starters in Gabe Foltz and Chase Taylor filling in for the injured starters Kobe Johnson and Kai Reasor. North Bend rushed for 75 yards on 31 carries.

“I saw a lot of physicality out of their defense,” said North Bend running back Jake Posey. “They’re big and they’re just a really good team and they play together.”

North Bend’s early lead didn’t last long as Thurston answered with a drive that was capped by a 27-yard pass from Cade Crist to Muggy Dawson that was followed by a successful two-point conversion try. Thurston’s special teams then stepped up in the second quarter as Caleb Scott weaved his way through a sea of Bulldogs on the way to a 63-yard punt return for a touchdown.

As the Colts looked to be putting another drive together late in the first half, it was North Bend’s John Burgmeier snagging an interception. Helped by 50 yards of Thurston penalties on the drive, the Bulldogs began to move the ball up field.

It appeared North Bend had scored a touchdown in the final minute, but a holding penalty brought back the score and North Bend ended the half with a 30-yard field goal from Adam Wood to cut the team’s deficit to 15-10 going into the locker room.

“That’s where you want to be but you have to come out and play the second half like you did the first half and we didn’t do that,” said Prince. “It was just a rough second half. They executed better than we did. Defensively they were creating penetration and moving our guys off the line of scrimmage, so we’ve got a lot of work to do offensively, defensively and on special teams.”

It was all Thurston in the second half and it started with the Colts forcing a three-and-out and followed by a 32-yard touchdown run from Wesley Kommer. Kommer had two touchdowns to go with 107 yards rushing and one reception for 69 yards.

A North Bend fumble on the next drive turned into a 19-yard touchdown connection from Crist to Dawson. Crist was 14-for-25 on the night with 218 yards passing, three touchdowns and an interception.

“We came out as a team and struggled in the first half but it says a lot that we can regroup at halftime and come out and play well in the second half,” said Crist. “Even if it’s not pretty, a win is a win. I’ll take it over a loss.”

With North Bend trailing 29-10 entering the fourth quarter, the Bulldogs started the quarter with fourth and goal from the one yard line but were, again, stopped by the Thurston defense. The Colts then marched 99 yards down the field capped by a 6-yard touchdown reception from Scott.

Despite the success in seemingly all phases of the game, the Colts were not pleased with the performance.

“We just didn’t play very well, it’s frustrating,” said Thurston head coach Justin Starck. “The amount of penalties we had tonight is just obscene. It’s embarrassing and it’s something that we’ve got to fix.”

The Colts finished with 19 penalties for 155 yards. The penalty woes began to take hold in the second quarter. After what looked like a three-and-out deep in North Bend territory, back-to-back offsides penalties gave the Bulldogs a first down. Thurston continued to cause problems for itself including in the third quarter when the Colts were flagged for roughing the passer, pass interference and a personal foul on one play.

“North Bend does a great job ... Coach Prince is a quality coach, they had a great scheme, the whole thing, but we need to be prepared for other opponents that we might see down the road,” said Starck. “I’m sure we’ll see Crater again or someone else and I don’t know how we’re going to win with that number of penalties.”

After a pair of losses to two of the top teams in 5A, the Bulldogs look to get back on track next weekend on the road at Springfield on Thursday night before three more league games to end the regular season. For running back Divenson Willis, there’s a clear goal in mind for the final month of the season.

“I just want to smack every single team from here on out. We have no excuse not to and now we just have to. We’re trying to go deep in playoffs and off to a state championship,” said Willis, who managed just 29 rushing yards on 13 attempts. “We know we can play with Thurston, we can definitely play in that state championship. It’s just eliminate the mistakes and finish it strong. First half just translate to the second half.”