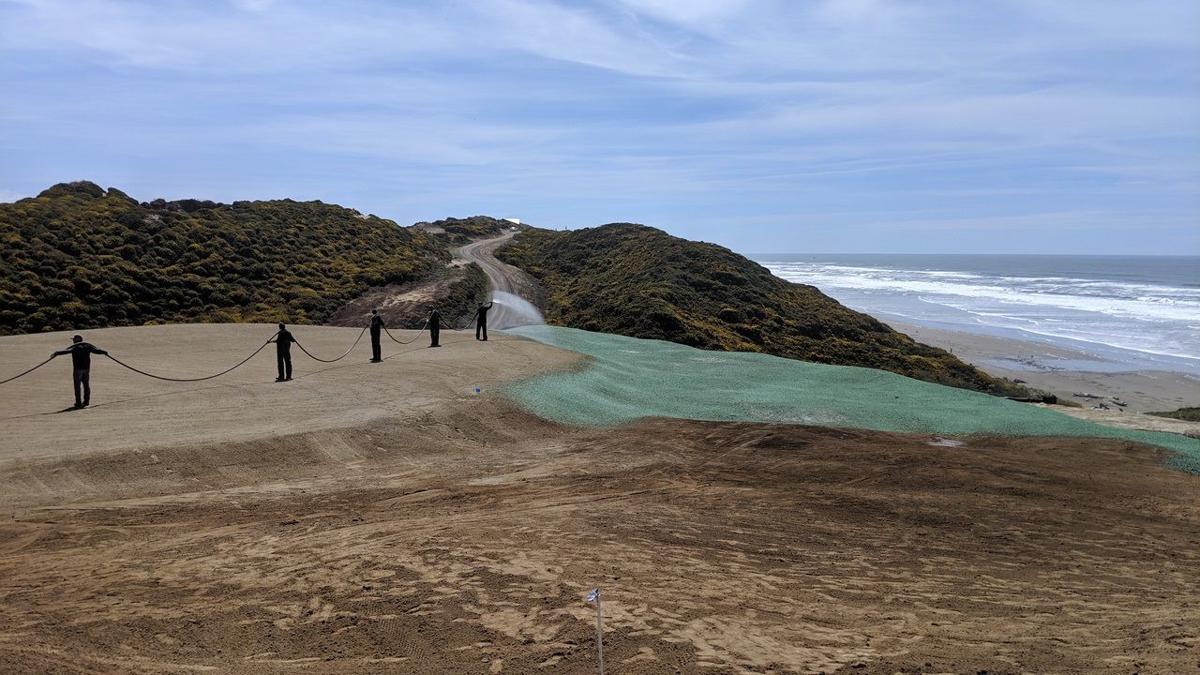 Workers spray grass seed on the ninth green at Ballly Bandon Sheep Ranch last Wednesday, the first green complex to be seeded on the 18-hole course that will open in 2020. 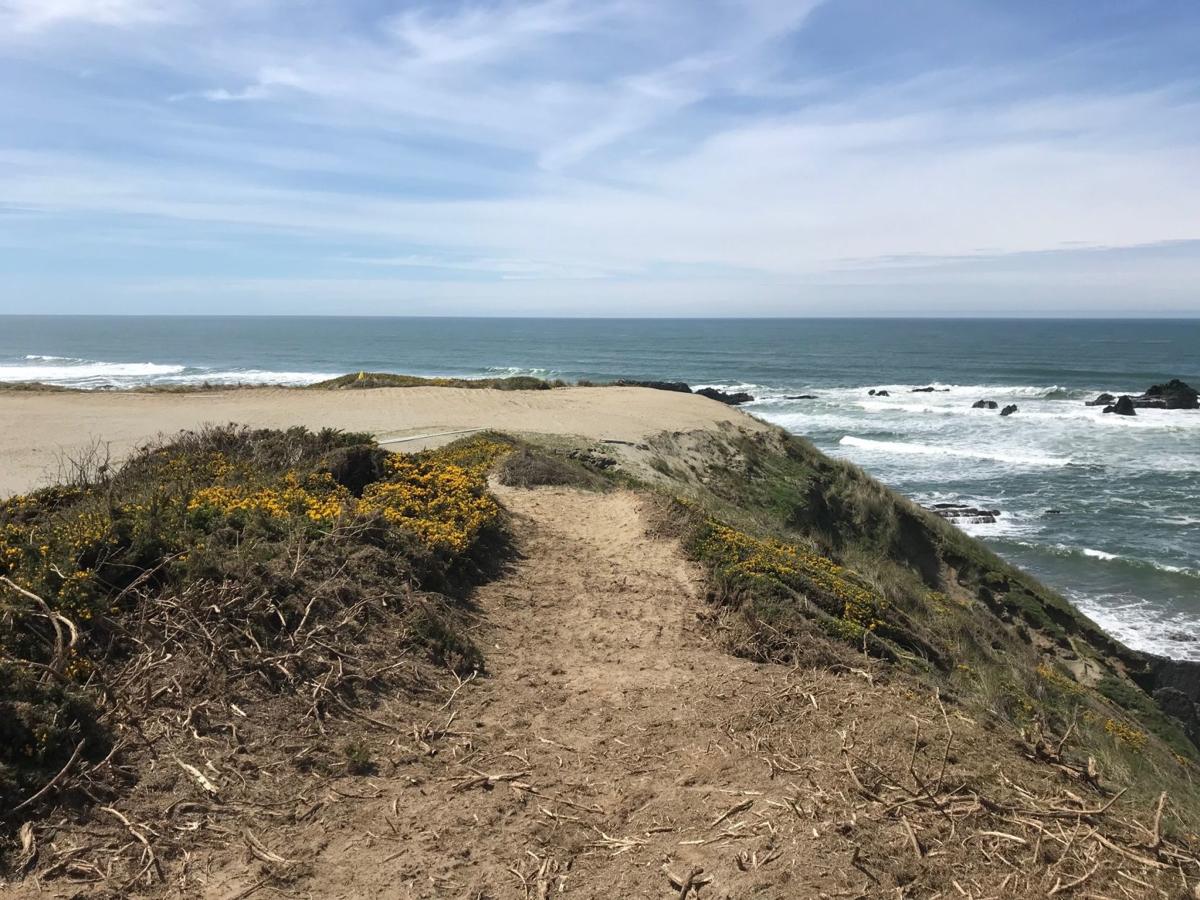 The double green on Fivemile Point will overlook rocks in the Pacific Ocean. 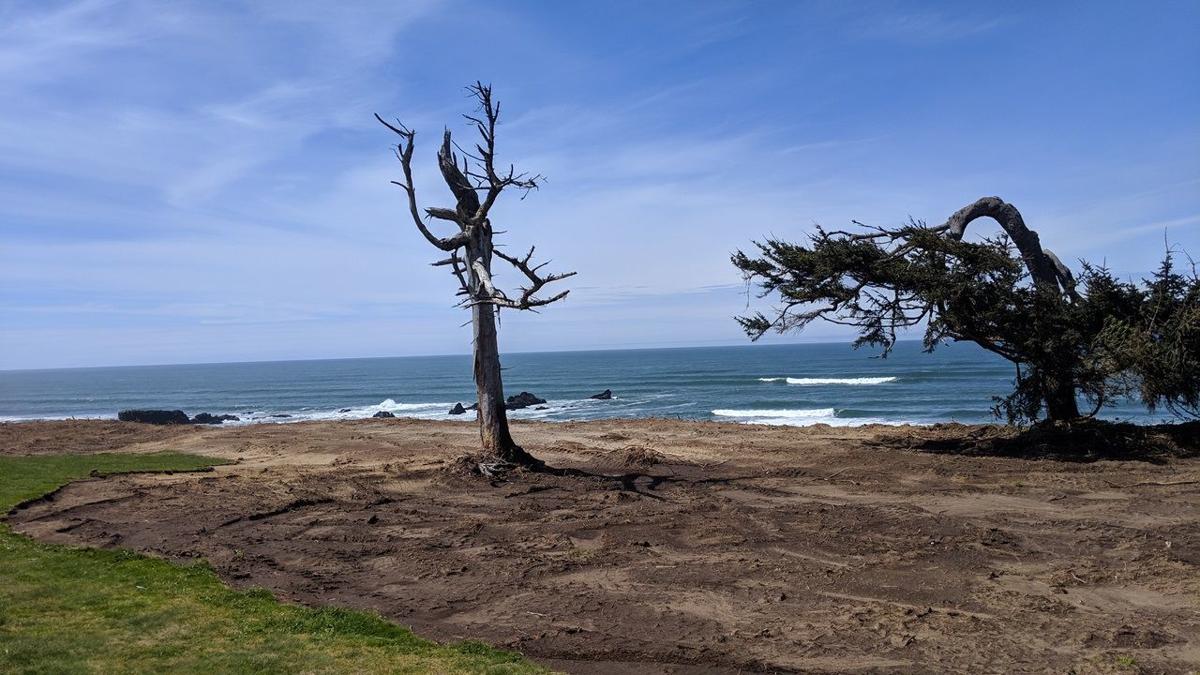 A pine tree and snag have been left in place along the cliff at Bally Bandon Sheep Ranch while gorse near them has been removed as part of the construction process to convert the existing rustic course into an 18-hole golf course.

BANDON — Golf Course construction is under way again on the oceanside cliffs north of Bandon as another potentially world-class course takes shape.

The course is being built on property just north of the resort that is co-owned by Bandon Dunes owner Mike Keiser and his college roommate and partner in Recycled Paper Greetings Inc., Phil Friedmann.

The double green on Fivemile Point will overlook rocks in the Pacific Ocean.

Friedmann has managed Sheep Ranch, which for more than 15 years has included 13 green complexes and a number of fairways so those few golfers who got to experience the rustic course could choose their own routing.

“It was wonderful to have this incredibly special golf experience early on,” Friedmann said in an article on the website for the new course. “It is now time to share the magic of Sheep Ranch with other lovers of the game.”

Reservations for the course will be handled through the resort and a road will be developed so visitors can drive directly from the resort to the new course without having to travel along Seven Devils Road outside of the resort property.

The original green complexes and fairways at Sheep Ranch were designed by Tom Doak, who also was the architect for Pacific Dunes and co-architect for Old Macdonald along with Jim Urbina.

But for the routing and design for the Bally Bandon Sheep Ranch, Friedmann and Keiser turned to another familiar design team — Bill Coore and Ben Crenshaw, who designed both Bandon Trails and Bandon Preserve.

“Coore and Crenshaw solved the riddle of the perfect routing on the ocean’s edge,” Friedmann said.

In addition to the work at the resort, Coore and Crenshaw also have worked for Keiser at Cabot Cliffs, Sand Valley and the Sand Box, a par-3 course at Sand Valley.

“They are great listeners,” Keiser said. “Their design of the Sheep Ranch is truly brilliant.”

“We are incredibly honored to have been chosen for this project by Phil and Mike,” Coore said in a story for an upcoming issue of the resort’s magazine commemorating its 20th anniversary next month. “The property has some of the most magnificent natural contours for golf that I have ever seen.”

The many holes along the cliffs will be the big attraction for Bally Bandon Sheep Ranch. The new course includes a mile-long stretch overlooking the beach and ocean and nine of the holes will be along the cliff, more than at the resort’s three exiting ocean-side courses combined.

They will include one double-green on Fivemile Point, which juts out toward the ocean, but because of the contours of the cliffs, the opportunities for spectacular holes, as well as unique shots, are plentiful, said Michael Chupka, the resort’s director of communications.

“The rest of the resort is very linear,” he said Tuesday while standing on the future site of the double green and looking south toward the Old Macdonald, Pacific Dunes and Bandon Dunes courses, which all sit on a relatively straight stretch of cliff.

“The movement of the coastline as it bends its way toward the point will tease golfers with panoramic views of the Pacific Ocean, dramatic sea stacks to the west, and the challenge of choosing your line of flight,” Coore said.

Friedmann said Bally Bandon Sheep Ranch should compare favorably with the four 18-hole courses at the resort, which all have received acclaim and regular spots in the various rankings of the top courses in the United States by golf publications.

“The design is brilliant and there is a mystical nature to the interaction of the land and ocean,” Friedmann said. “The experience will be amazing.

While the team of Coore and Crenshaw, along with project manager Ken Nice, the resort’s director of agronomy, and lead contractor Tony Russell are reconstructing the green complexes, they will be able to use much of the existing fairway grass from the original Sheep Ranch.

“We’ll be able to save a lot of time, energy and money,” Nice said Wednesday.

Four holes at the south end of the course, as well as two along the eastern and northern edges, will be completely new.

The first to be complete will be those at the south end. On Wednesday, Nice and a team of crew members seeded what will eventually be the ninth green, the first to actually have grass growing.

“It’s always exciting to get it started,” Nice said. “This will be the first green seeded at the new and improved Sheep Ranch.”

Chupka said the preliminary plan is to leave a number of the trees and snags along the cliff, adding to the experience. Some gorse, which right now has its yellow flowers in bloom, also will remain, though much of it is being removed.

Wild strawberry plants with their white flowers also stretched along the ground near the double green on Fivemile Point.

Four different shapers from the Coore-Crenshaw team — Jim Craig, John Hawker, Ryan Farrow and Keith Rhebb — all are working on site, which will help speed up the process of preparing the greens for seeding and doing whatever renovation is needed for the various fairways.

When all the work is done, the course will be a par-71 playing to about 7,000 yards from the longest tees.

Reedsport’s baseball team picked up a big nonleague win Wednesday, beating host Kennedy 3-2 in a matchup of top-five teams in the Class 2A-1A …