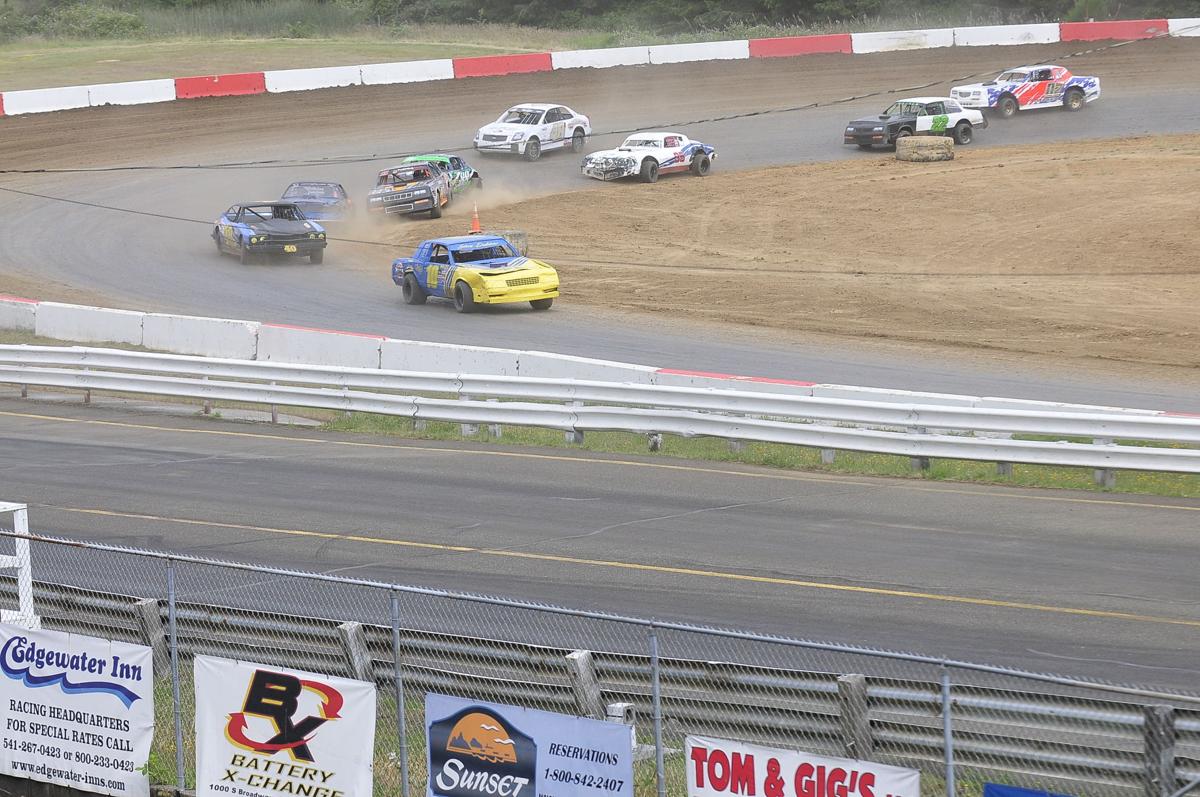 Steve Dubisar of Coquille leads the field during the Street Stocks division on Sunday at Coos Bay Speedway. The other drivers include Ken Fox of North Bend, in car No. 13, who won Saturday's main event in the division. 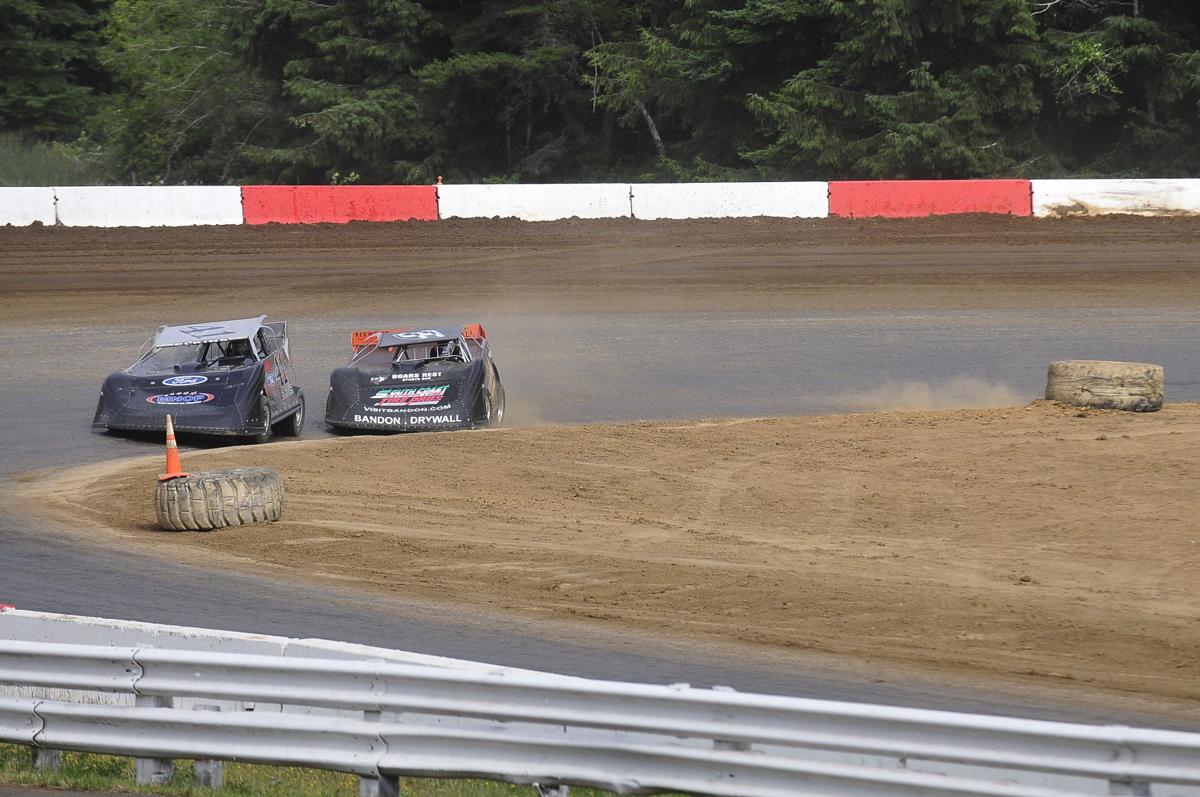 Brody Montgomery of Bandon, right, tries to get past Doug Elkins of Salem during the America's Mattress Super Late Models main event on Sunday.

Steve Dubisar of Coquille leads the field during the Street Stocks division on Sunday at Coos Bay Speedway. The other drivers include Ken Fox of North Bend, in car No. 13, who won Saturday's main event in the division.

Brody Montgomery of Bandon, right, tries to get past Doug Elkins of Salem during the America's Mattress Super Late Models main event on Sunday.

COOS BAY — Out of town drivers nearly won every main event over two busy days of racing on the oval dirt track at Coos Bay Speedway over the weekend.

The races Saturday and Sunday again proved popular for drivers from across western Oregon with more than 60 cars entered on Saturday and more than 50 on Sunday.

Over the two days, the only local driver to win a featured race was North Bend’s Ken Fox, who won the Street Stocks division on Saturday. He beat Dakota Godard of Corvallis and Dylan Siewell of Coos Bay across the line. The heat race winners were Phil Lovvorn of Corvallis and Terry King of Warren.

Steve Dubisar of Coquille led most of Sunday’s main event in the division before being passed late by Kevin Roberts of Gresham. Dubisar and Graig Osborne won the heat races.

Jason Johnson of Gresham won the America’s Mattress Super Late Models division both days. On Saturday, he finished ahead of Brody Montgomery and Braden Fugate of Bandon. Fugate and Doug Elkins of Salem won the heat races.

On Sunday, Elkins won the heat race and was second behind Johnson in the main event, with Montgomery and Fugate third and fourth.

In the Hornets division, Isaac Stere of Cottage Grove handed Myrtle Point racer Hannah Robison a rare defeat on Saturday. Robison, who was second in the main event, won one of the heat races and Dan Briesacher, one of six racers from Florence, won the other.

On Sunday, Stere won the heat race, but couldn’t keep up with Seth Christian of Roseburg in the main event.

Scott Beaudoin of Portland won the Mini Outlaws race on Saturday, ahead of heat winner Jason Kellam of Coos Bay. Beaudoin also won the heat race Sunday, but a late flat tire knocked him out of contention in the main event and the win instead went to Tahlen Rogers of Albany, with John Henry of Springfield second.

Saturday’s featured attraction was the Southern Oregon Dwarf Cars, and Brock Peters of Eagle Point won the featured race in that division, with Ryan Smith of Central Point second.

On Sunday, the featured attractions were racers in the IMCA Modifieds and Sportmod classes.

James Lipke of Yreka, Calif., won the main event ahead of John Bennedetti of Yakima, Wash., and Bricen James of Albany, the two heat winners.

David Schmidt added a win in the IMCA Sportmod main event to his earlier win in the Sportsman late Models. Coffman was second and he and Schmidt won the heat races.

Results for both days will be included in Saturday’s print edition of The World.

Saturday’s race also was a big draw for the fans, with several hundred in attendance. The crowd Sunday was about 300, which track owner Drake Nelson said was a typical Sunday crowd.

He said the drivers are enjoying the busy schedule, which included four racing dates over the first 12 days of the oval track season. The track will be in action again Wednesday, when Nelson has invited the dwarf car drivers back, as well as the winged sprint cars in what he is calling Wednesday Night Throwdown. Local drivers in the Street Stocks and Junior Stingers divisions also will be racing.

The gates open at 5 p.m. and racing starts at 7. Admission is $15 for adults and $13 for senior citizens and students 7 to 17 years old. Kids 6 and under get in free. A family pass for two adults and up to three students is $35.

This weekend it will be the ET Summit Series racing at the track. Both Saturday and Sunday drivers will be competing in the Super Pro, Pro, Sportsman, Motorcycle and Junior Dragster divisions.

The gates open at 8 a.m., with time trials starting at 11 a.m. and bracket racing at 1 p.m. both days. Admission each day is $12 for spectators and free for kids 6 and under. The entry fee for drivers is $50 with a guaranteed payout.