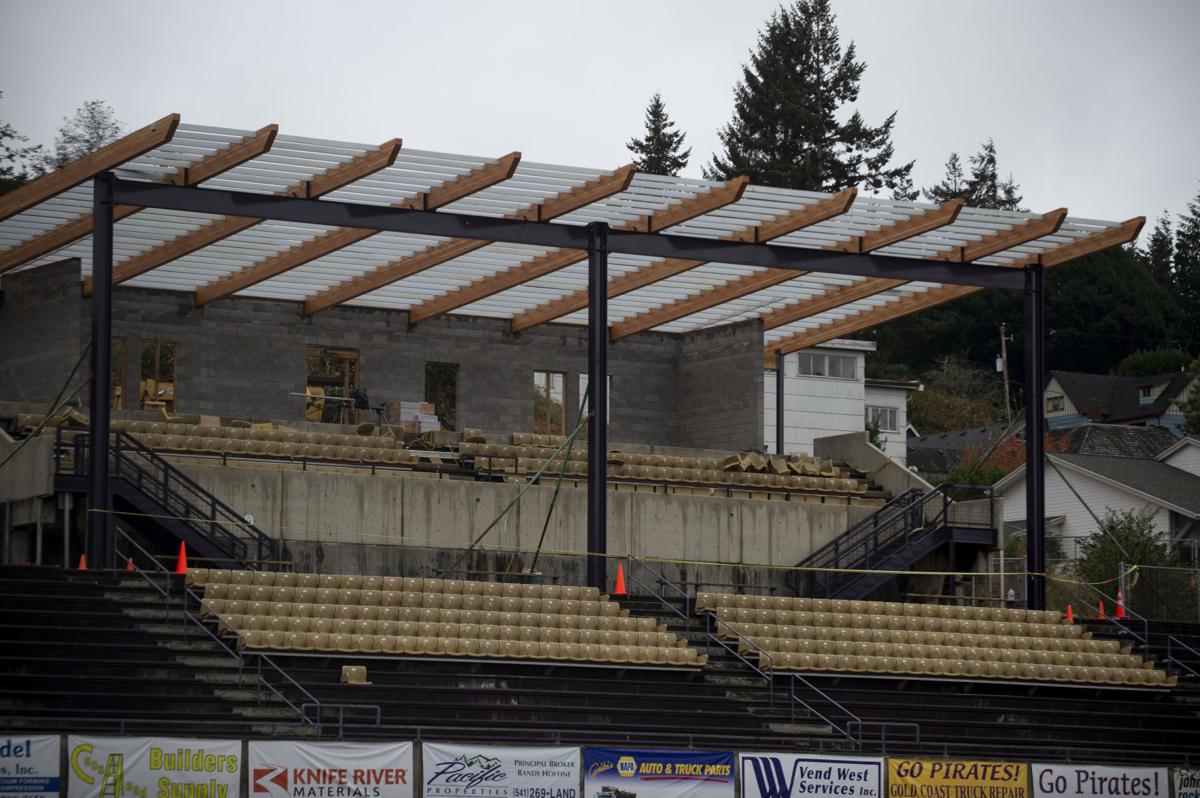 The start of a roof over the visitor side of the Friday at Marshfield High School. Officials expect to have the roof mostly complete by Thanksgiving. 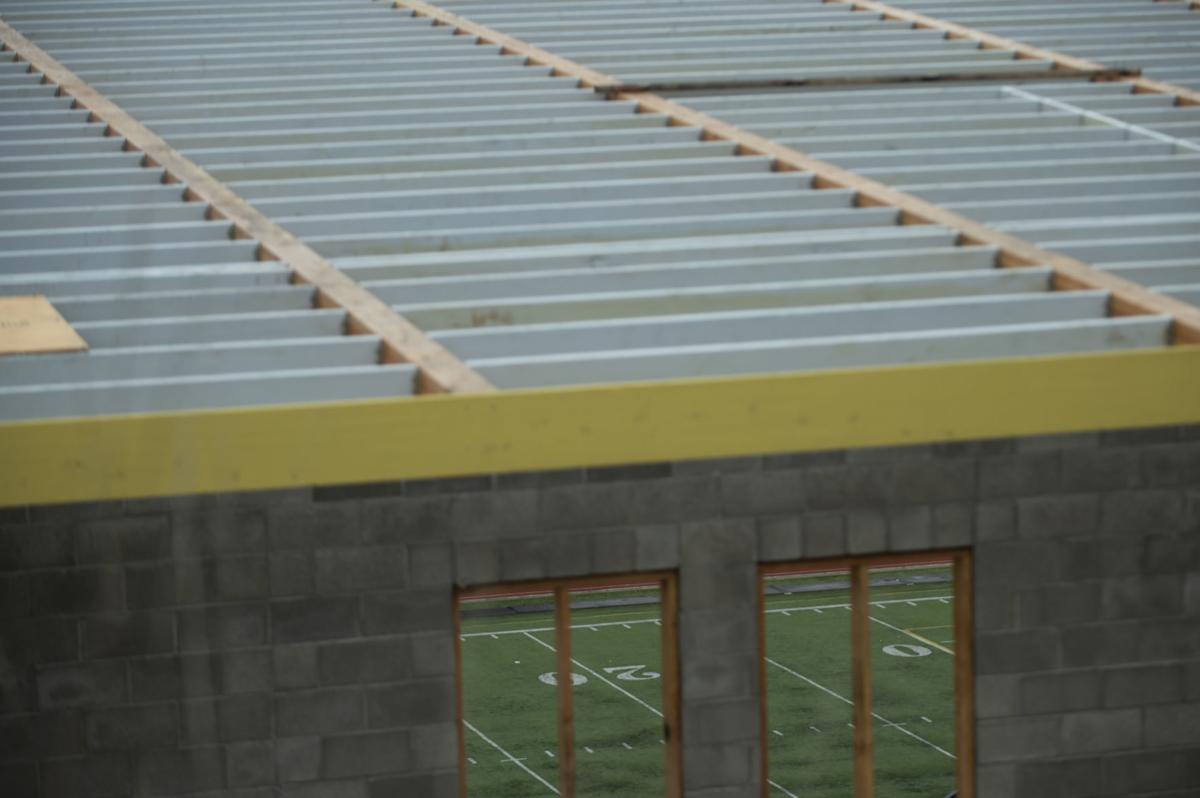 Officials expect to have the new roof over the visitor side of Marshfield's Pete Susick Stadium mostly complete by Thanksgiving.

COOS BAY — It’s been a long process, but the roof is nearly complete on the south grandstand at Marshfield’s Pete Susick Stadium.

The huge support structure for the roof is in place and that portion of the Raise the Roof project should be completed soon, with organizers now looking ahead to the next phase.

Officials expect to have the new roof over the visitor side of Marshfield's Pete Susick Stadium mostly complete by Thanksgiving.

As project leader Bill McNutt and longtime friend Boyd Bjorquist painted the fascia boards gold late last week, workers from the contractor for the project, the Roseburg company Renco General Contractors, were attaching the boards that provide the support for the plywood. When the plywood is in place, a membrane will be added to the top to make it waterproof.

“It’s been the most challenging project I’ve ever worked on, but also the most rewarding,” McNutt said.

Getting to this point has taken a lot of effort by a lot of groups, including individual donations, supplies and in-kind donations from South Coast companies and three rounds of bidding to get the project costs down, McNutt said.

Renco bid on the project all three times, being flexible with the requests of organizers to use in-kind donations to cut down on some of the costs.

“They have always been interested in the project,” McNutt said of Renco.

When the roof is completed, it will cover about 400 of the 1,310 seats on the south side. When combined with the existing north side, Pete Susick Stadium will have about 3,100 covered seats, making it one of the premier high school football facilities in the state.

The next phase will include adding five viewing boxes at the top of the south side with room for eight fans each, a sort of premium seating area.

First dibs for the rest of the newly covered seating will go to people who paid seat license fees as part of the fundraising drive when the south grandstands were started in the 1990s. Funding ran dry then and the grandstands remained uncovered until the Raise the Roof project was started.

The renewed effort has been slowed by the steel tariffs, which drove up the cost of the huge support beams needed for the roof, McNutt said.

But local businesses, many of them with Marshfield graduates, have stepped up with major contributions.

Butch Shields, a 1965 graduate, donated the costs of painting the four steel beams — three uprights and the cross piece — through his business Gold Coast Truck Repair, and also painted the railing for the stairwells a matching purple.

Knife River Inc., through 1991 graduate Chris Peach, donated all the concrete for the later parts of the phase, while Scott Partney Construction did concrete work earlier in the summer. Partney is a 1974 Marshfield graduate.

Southport Lumber, led by Jason Smith, donated all the support lumber for the plywood.

Roseburg Forest Products in Coquille donated all the plywood for the roof, though the efforts of Randy Sturgill.

And Marshfield’s construction class, under the direction of instructor Jesse Ainsworth, painted the clear coating on the 10 huge glulam, beams that are each 60 feet long.

Bryan Knutson of Knutson Towboat coordinated having the giant crane in place to move the glulam beams into position. Knutson is a 1995 Marshfield graduate.

McNutt also praised Coos Bay School District Superintendent Bryan Trendell for his support and for the district kicking in funds to make completion of this phase of the project possible.

“Without his help, we would never have been where we are at,” McNutt said.

McNutt and the rest of the Raise the Roof committee hope seeing the roof in place will spur donations for the next phase, which also will include wheelchair access and a ticket booth to serve the south grandstands. There currently is no good wheelchair viewing on either side of the stadium, and with the new roof, there will be covered spots for people in wheelchairs.

“We feel being able to get this roof up would be a linchpin for us,” McNutt said.

With good community support, McNutt thinks that phase can be completed next summer in time for an open house in the annual Civil War game when Marshfield hosts North Bend to open the 2020 football season.

He thinks the work can be completed with about $100,000 in cash and in-kind donations.

He is delighted to see this portion nearly complete.

“We have been striving for functionality of the project and to be good stewards with the money,” he said.

People can learn more about the project and how to donate either by visiting www.raisetheroofmarshfield.org or the group’s Facebook page.