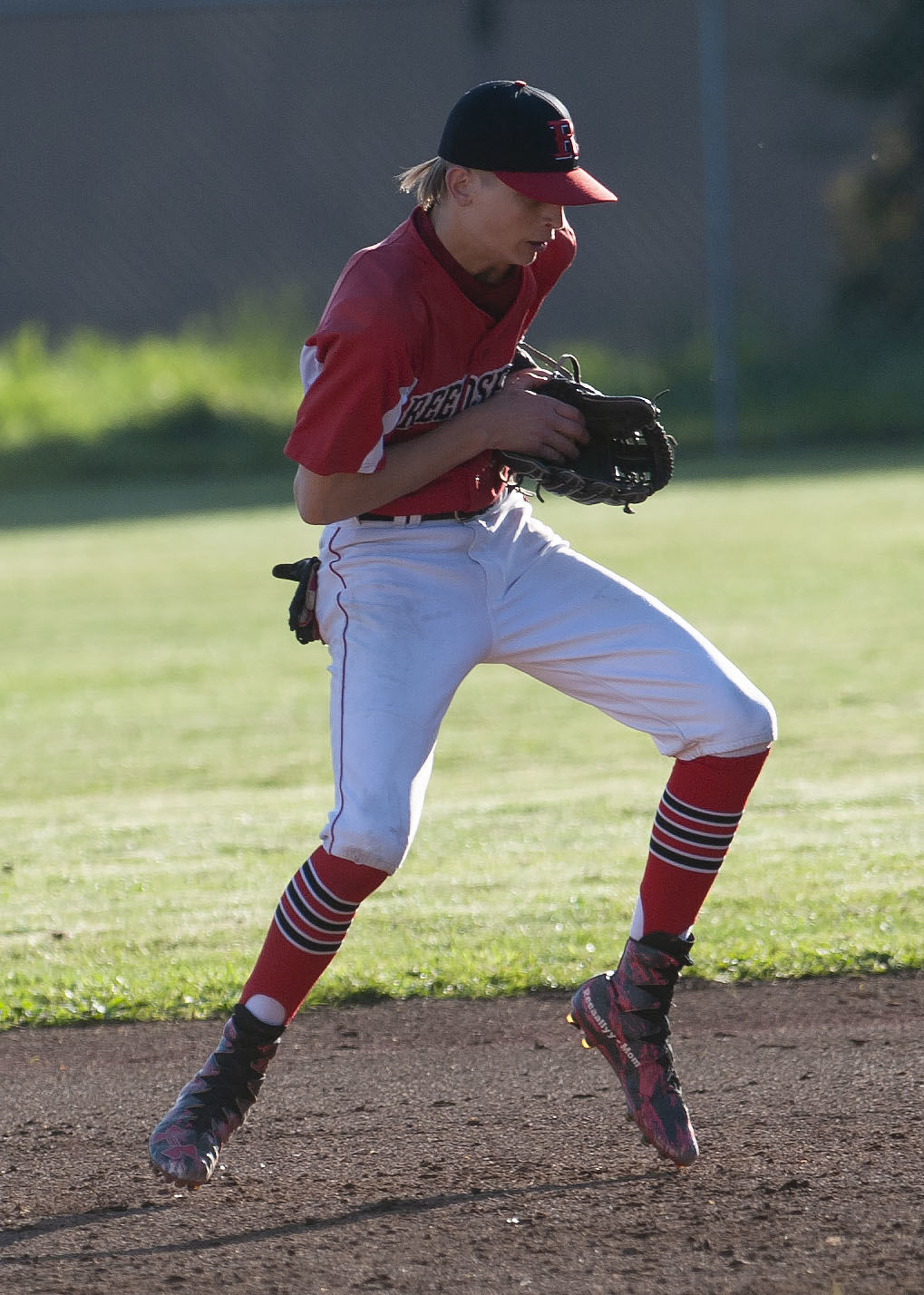 Reedsport's AJ Stoltey handles a high hop Friday at shortstop during a game against Bandon. 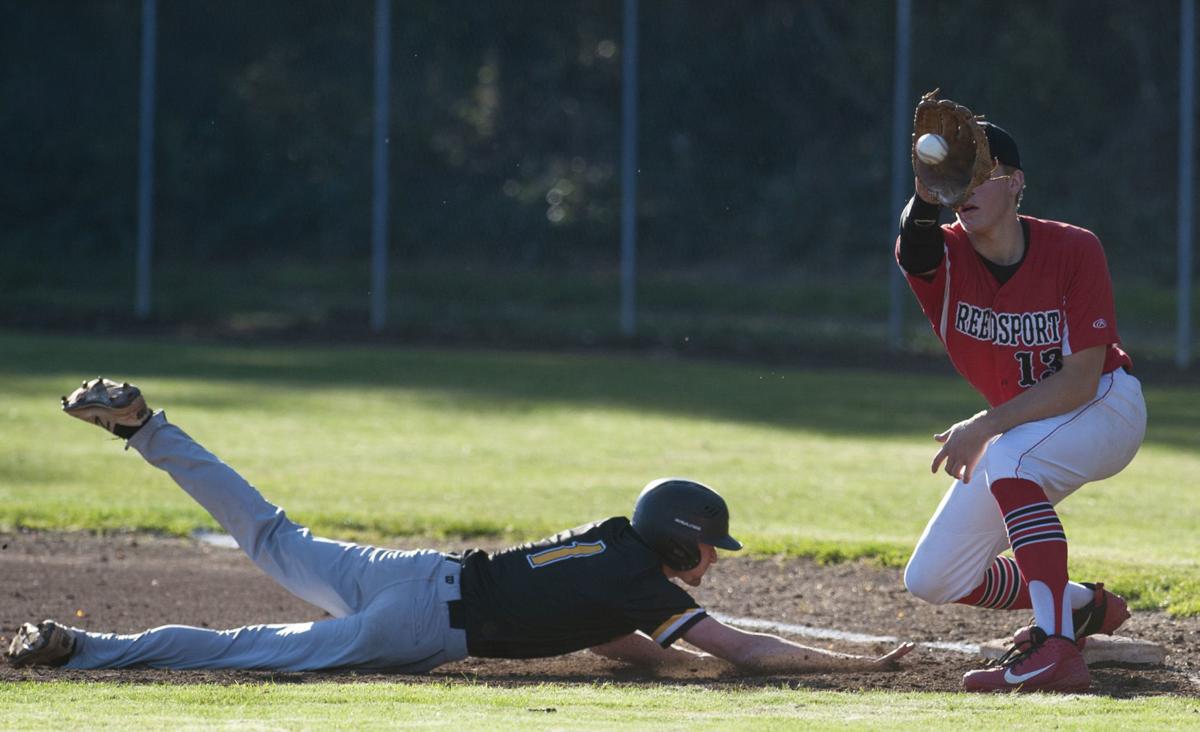 Dallas McGill catches a throw from the mound Friday as Reedsport tries to pick of Bandon's Braydon Freitag at first in Bandon. 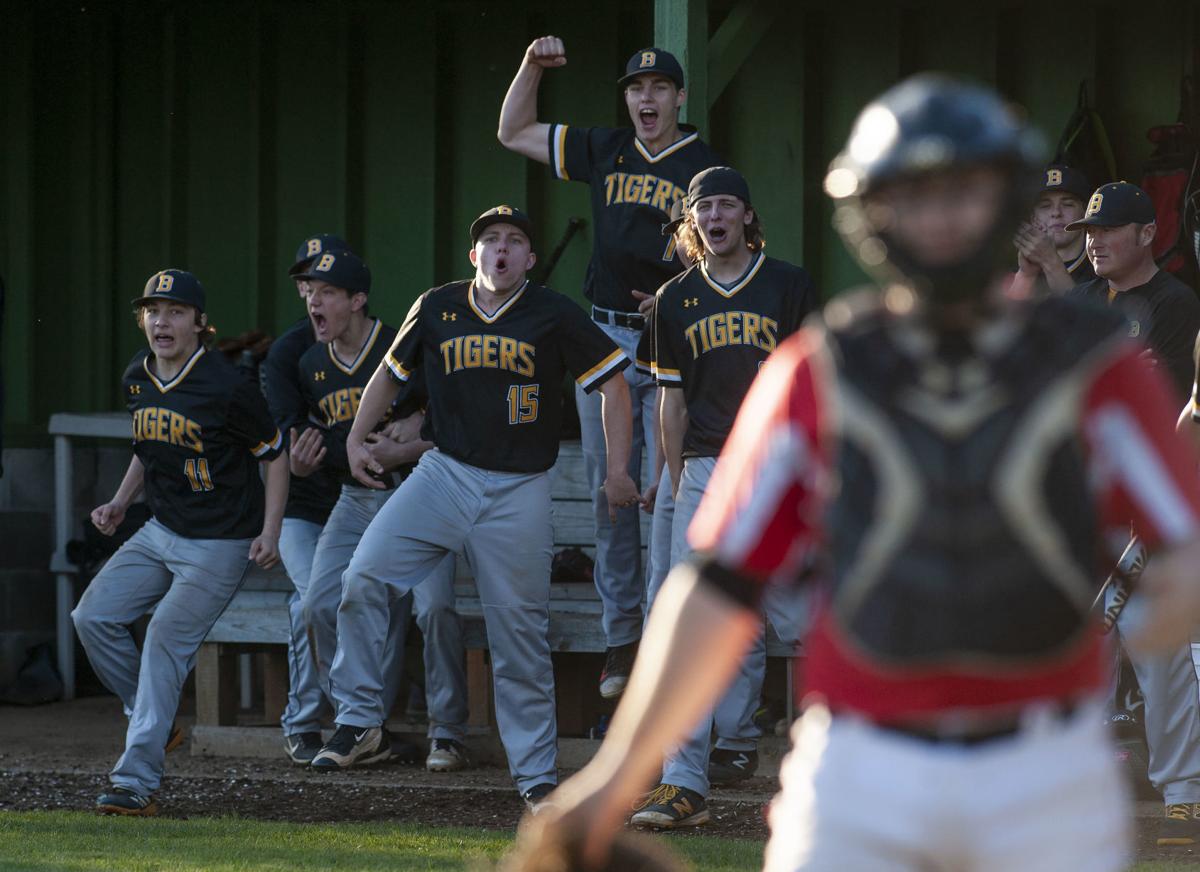 The Bandon bench erupts Friday as a teammate is hit with a pitch during the final inning of a game against Reedsport in Bandon. 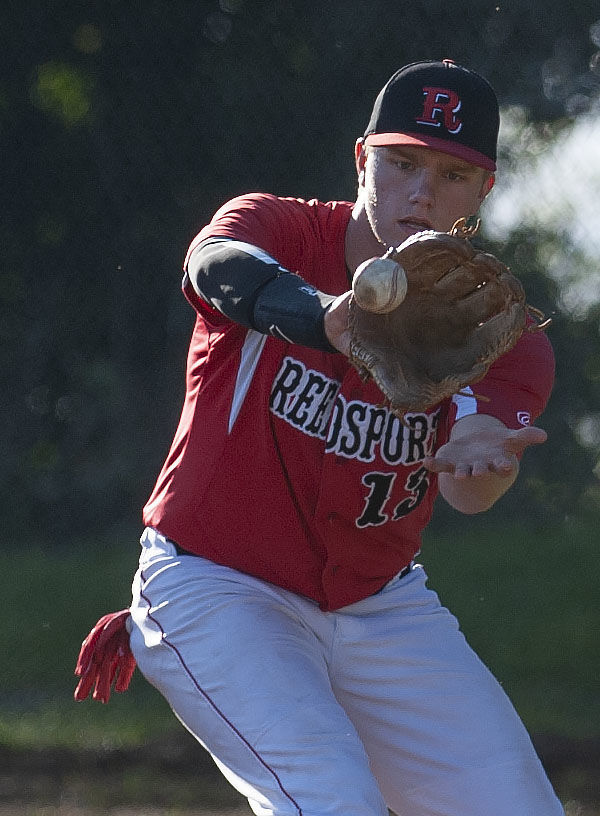 Reedsport's Dallas McGill catches a throw at first base Friday for an out against Bandon during a game earlier this year. 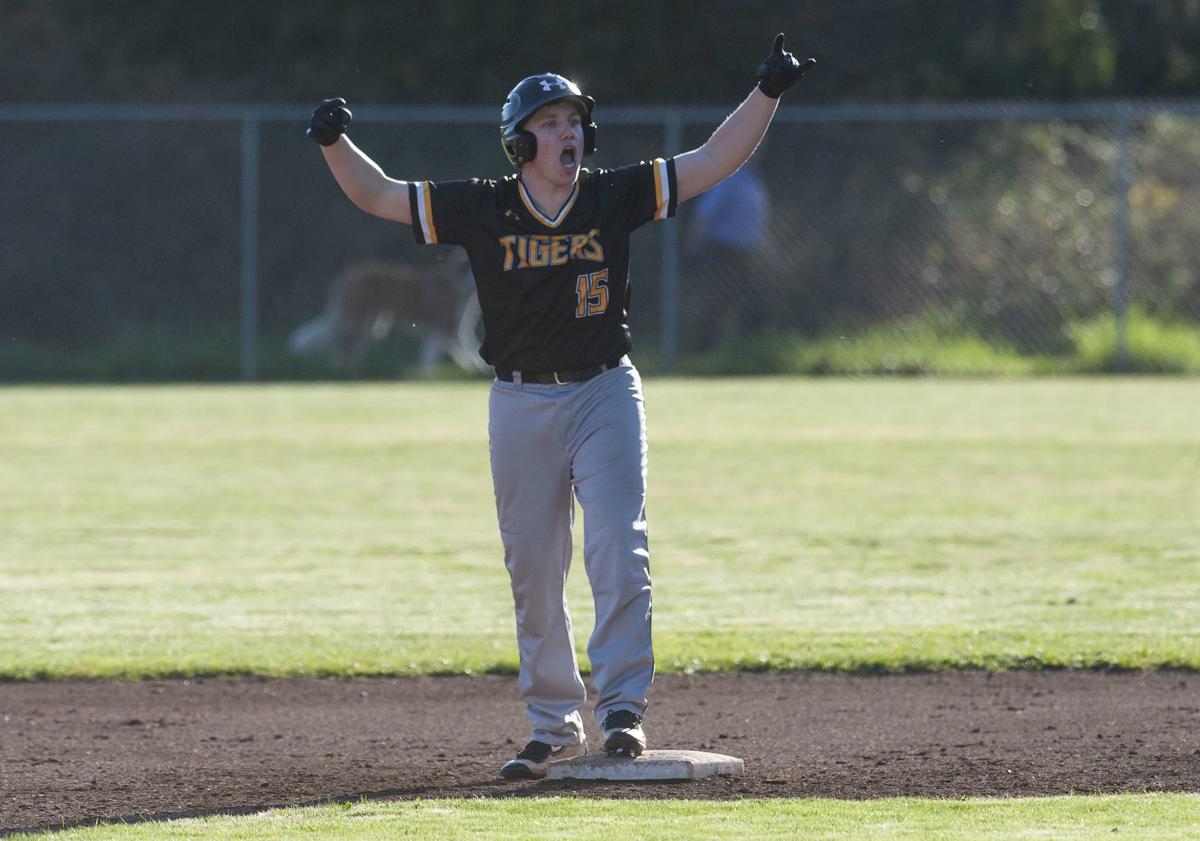 Bandon's Hunter Hausler celebrates Friday after an R.B.I. double against Reedsport in Bandon.

Reedsport's AJ Stoltey handles a high hop Friday at shortstop during a game against Bandon.

Reedsport's Dallas McGill catches a throw at first base Friday for an out against Bandon during a game earlier this year.

Bandon's Hunter Hausler celebrates Friday after an R.B.I. double against Reedsport in Bandon.

BANDON — When Reedsport and Bandon take the same baseball field in competition, it’s going to be close.

The last three meetings, including Friday’s 4-3 Reedsport win, have all been decided by two runs or less, with the Brave holding a 2-1 advantage in those three games. It always comes down to a play here, or a play there; a big hit here or defensive play there.

Dallas McGill catches a throw from the mound Friday as Reedsport tries to pick of Bandon's Braydon Freitag at first in Bandon.

Friday was no different.

Bandon outhit Reedsport 7-5, but the Tigers committed five errors and Reedsport did just enough offensively with some small ball then escaped a bases-loaded, two-out jam in the bottom of the seventh to head back north with a win.

“It doesn’t matter if Reedsport’s up and Bandon’s down, or Bandon’s up and Reedsport’s down. It’s always a close game,” Reedsport coach Jason Lavigne said.

It was a solid gut check for the Brave, who are again expecting to make a deep run in the playoffs.

Friday’s result was Reedsport’s eighth straight win after dropping its season opener to Brookings-Harbor, the top-ranked team in Class 3A, and many have been close.

A year after rolling just about everyone on its schedule, Reedsport has had to work through its 2019 slate, perhaps better preparing it for the postseason in which close games are the norm.

“Like I told the kids just a second ago, I don’t mind a 4-3 game right now,” Lavigne said. “This early in the season, bases loaded, have to get that out, I want that gut check right there. ‘Cause I want to know we can do it in the playoffs.”

Bandon felt like it should have won on Friday. Tigers coach Jay Ferrell said his young team gave the game away and pointed to the five errors as maybe not the sole reason, but definitely a big one.

Tigers starter Braydon Freitag was outstanding, though got the tough-luck loss. He struck out eight in 6 innings of work, with four walks and four hits. Of the four runs Freitag allowed, just one was earned.

“I think we absolutely gave that game away, ‘cause we had another five-error performance,” Ferrell said. “It’s plain and simple.”

Those defensive miscues from Bandon came early, and Reedsport pounced.

A bad throw to second on a comebacker gave Reedsport life and a fourth out in the first inning, helping turn a two-on, one-out jam into a bases-loaded, two-out jam that eventually resulted in a run.

Nick Glover, who walked with one out to start the Reedsport scoring chance, scored from third after a ground ball in the infield wasn’t fielded cleanly.

Bandon got runners to second and third with two outs in its half of the first when Josh Minkler notched the first of his three hits on the day and Freitag walked behind him.

The Bandon bench erupts Friday as a teammate is hit with a pitch during the final inning of a game against Reedsport in Bandon.

“I felt pretty good,” Thornton said. “I had good defense behind me, which helps a lot. It gets your confidence up. Just throw strikes and they’ll back you up.”

That passive approach at the plate was another frustration for Ferrell.

“A lot of backwards Ks, which always drive a coach nuts,” Ferrell said.

Reedsport added two more runs in the top of the third, again taking advantage of an infield error.

Griffin Lavigne shot a low liner into left center that rolled almost all the way to the fence, then Dallas McGill reached on an error to follow.

That put runners on the corners, and Reedsport executed a double steal, timed it perfectly, and drew a throw to second. Courtesy runner Derek Johnson scored easily from third, and Reedsport doubled its lead to 2-0.

A wild pitch with Jacob Chaney at the plate allowed McGill to move to third, then Chaney dropped down a perfect bunt with McGill charging down the line. The squeeze play worked, Reedsport added to its lead and showed it can play all sorts of baseball.

Bandon responded with a run in the home third. Minkler, Freitag and Hunter Hausler all singled to load the bases with one out, then Brynn Green walked and Minkler scored, cutting the Brave lead to 3-1.

But Thornton came back with two strikeouts, one of which was looking, and Bandon wasted a great scoring opportunity.

Reedsport acquired some small insurance in the sixth when AJ Stoltey singled with one out, then moved to second on a comebacker.

Glover then dropped a single into the outfield and Stoltey, running on contact with two outs, scored easily.

Bandon went to Jason Wilhite in the seventh and he allowed a hit to Kyle Barnes, but kept the score where it was, at 4-2, so Bandon had a chance to potentially extend the game or even win it in the bottom half.

And the Tigers almost did.

Minkler lined one up the middle for his third hit, then Freitag walked off reliever Stoltey, who had been solid since his appearance in the sixth.

A called strike three put Bandon down to its last out, then Stoltey plunked Ethan Hultin to load the bases.

Up came Wilhite, who Stoltey hit on an 0-2 pitch, forcing in Minkler and cutting Reedsport’s lead to one at 4-3. Reedsport made a third pitching change, going to catcher Griffin Lavigne and the senior got a harmless groundout to Barnes at third to slip away with the win.

“We’re really happy,” Thornton said. “We showed a lot of heart at the end.”

As Reedsport likely moves toward another playoff appearance, Bandon has work to do. Freitag think Friday’s effort, though simultaneously frustrating and encouraging, is the wake-up call that’s needed.

“It’s motivation,” Frietag said. “Some of the weaker teams in the league we should be stomping on, and I think that a game like this shows us who we are.”

Reedsport improved to 2-0 in league play. Bandon is 2-2 and looking for a top-three finish and guaranteed spot in the Class 2A-1A playoffs.

Reedsport visits Waldport in a make-up game on Monday and hosts Coquille on Tuesday. Bandon hosts Siletz Valley on Tuesday.

Bandon outhit Reedsport 7-5, but the Tigers committed five errors and Reedsport did just enough offensively with some small ball then escaped …