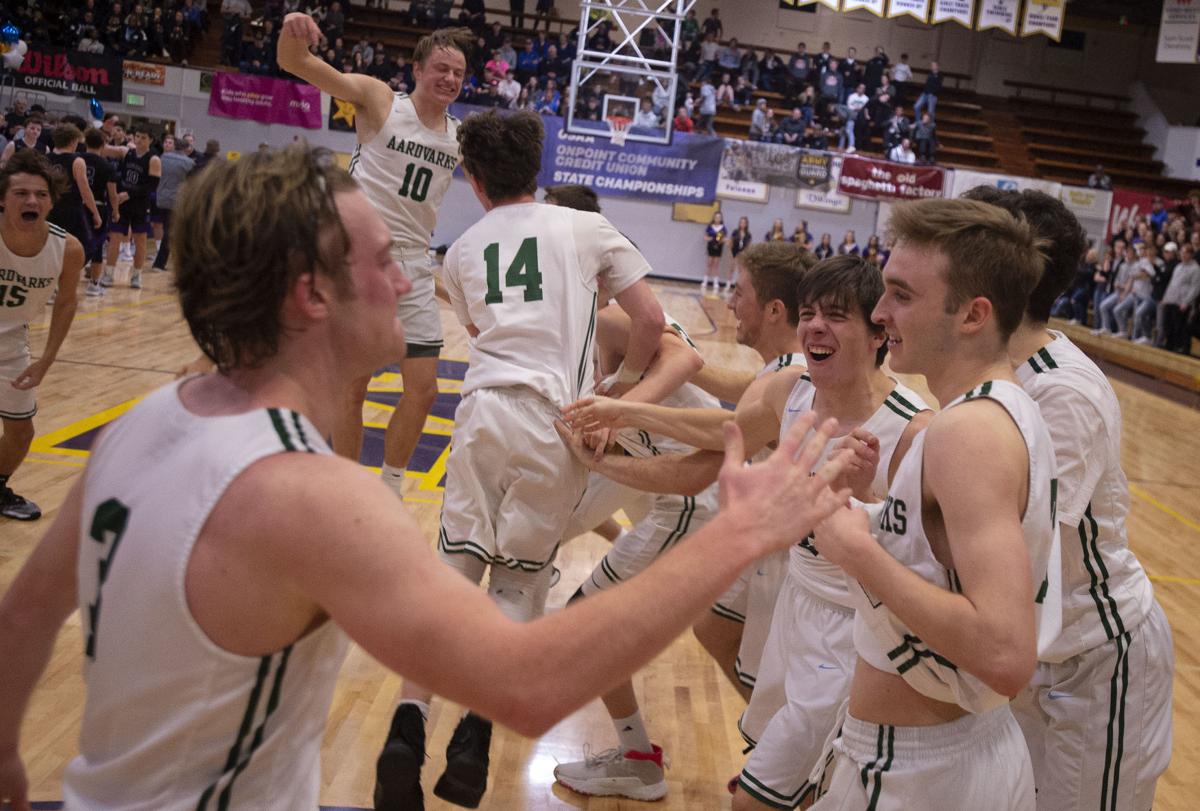 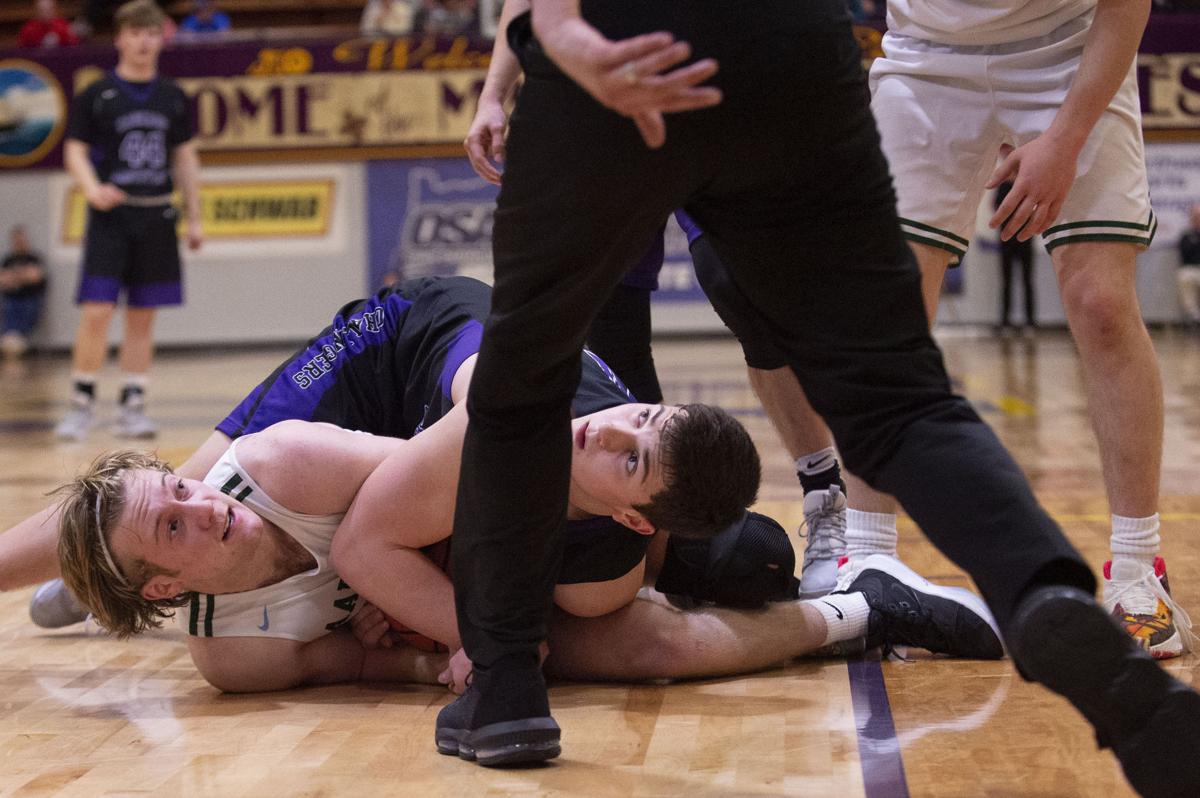 Oregon Episcopal's John Fitzhenry, left, and Cascade Christian's Kiegan Schaan look up at a referee as they battle for a loose ball during the Class 3A boys championship game Saturday at Marshfield High School. 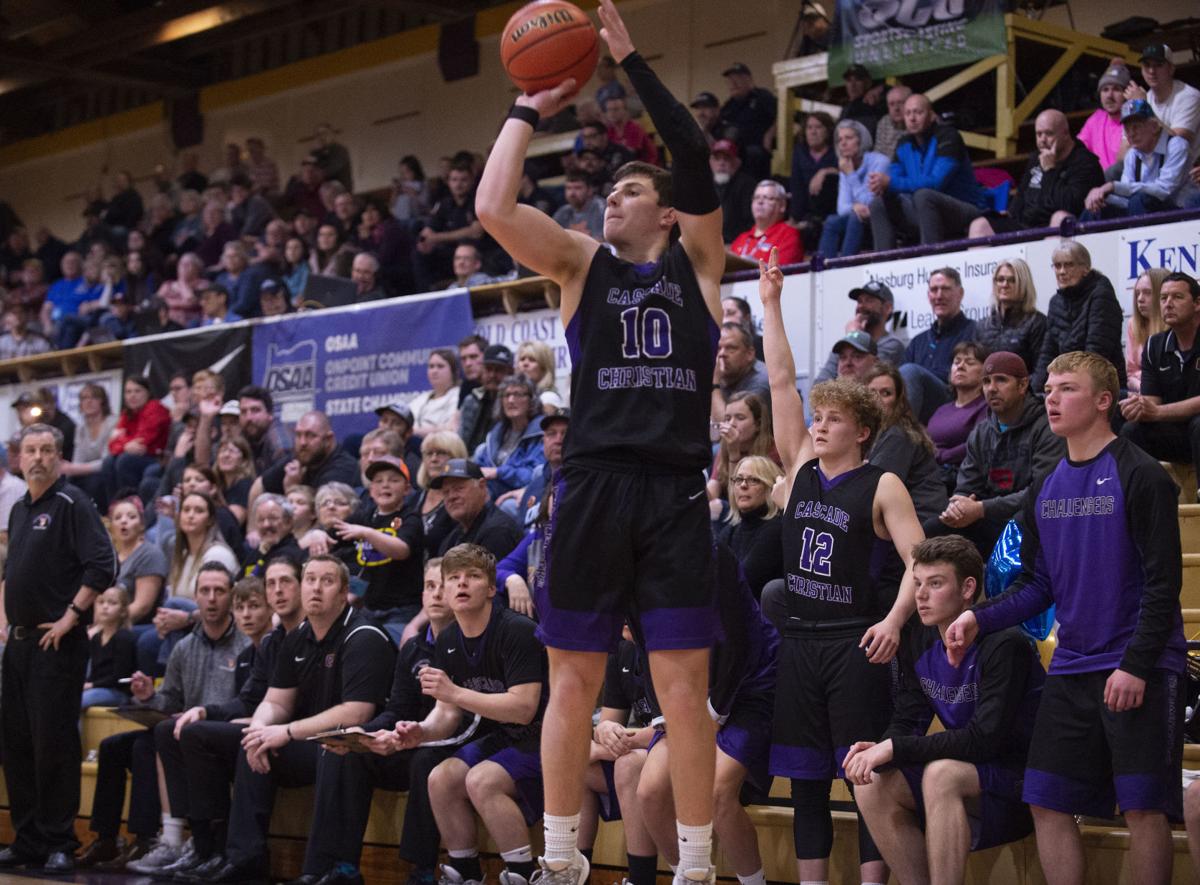 But it was Oregon Episcopal’s two-time lacrosse All-American being called upon on the hardwood on Saturday night at the Class 3A boys basketball championship game to help the No. 9 Aardvarks secure a 35-33 victory over Cascade Christian.

With Oregon Episcopal trailing in the final minute of play, Fitzhenry, the unlikeliest of players to find offensive production, saw an opening.

Oregon Episcopal's John Fitzhenry, left, and Cascade Christian's Kiegan Schaan look up at a referee as they battle for a loose ball during the…

“I’m horrible at dribbling and I dribbled maybe five times the entire game. I dribbled into the middle. I felt decently open so I thought I would take the shot,” said Fitzhenry who had not scored up to that point of the game. He drove the lane and banked in a jumper to put Oregon Episcopal up 34-33 with 37 seconds to play.

It was the only made field goal in the quarter for the Aardvarks. But did he know it was going to go in?

“I mean, like, I never know,” said Fitzhenry who had two points in the game.

With the lead in hand, the Aardvarks needed one final stop on defense. Points were hard to come by all night for both teams and as Cascade Christian’s Matt McPheeters drove to the basket in the final 10 seconds of play, he was met by a trio of defenders and it was Charles Willmott recording a block to help seal a state title.

“I think I was helping in the middle ... and I just stepped over and put my hands up and I got my hand on the ball. And Jakob (Wilkins) hit a free throw and that was that,” said Willmott, who was also the offensive engine for the Aardvarks all night on the way to scoring 19 points.

Oregon Episcopal head coach Edward Kirk, in his third year leading the Aardvarks, has opened his practices with defensive drills all in hopes of being ready when this moment came.

“I told them, defense wins games, wins championships. I know it’s cliché but it does and it happened right there,” said Kirk. “They worked their butt off and I’m so happy for them.”

This defensive effort all season, that slowed the Cascade Christian offense throughout the game on Saturday, has been a staple in taking a team that won five games last season and turning them into state champions.

“You can’t write that up. That’s a fairy tale. We just enjoy the ride and we’re very fortunate,” said Kirk from the middle of the Marshfield High School gym while his team celebrated all around him.

To get to the celebratory scene that included cutting down the nets, the Aardvarks had to hit free throws. Through the first three quarters of play Oregon Episcopal was 6-of-14 from the foul line.

But in the fourth quarter — a quarter that didn’t see a made field goal until Cascade Christian’s Donminic Lewis scored with one minute to play to give the Challengers the lead — the Aardvarks went 8-of-10 from the line. Willmott was 5-of-6 from the line in the final period.

“I missed my first few but fourth quarter, third quarter I told myself breathe, use my legs, shoot it," he said.

The game was a defensive slugfest from the start. Willmott had to come out early after he was bleeding under his right eye and it was all part of neither team finding offense. Midway through the opening quarter the Aardvarks had a 4-1 lead and at the half had a 16-14 lead.

“It was kind of a defensive, grinding stalemate,” said Cascade Christian head coach Brian Morse. “It was kind of an ugly game from that standpoint. But defensive purist people like that because it’s a grind and it’s the way basketball used to be played. But both teams had trouble scoring.”

The Challengers got going in the third quarter behind an 11-2 scoring stretch. Finding the way to the hoop was McPheeters, who finished with 10 points and was 6-of-7 from the free throw line.

Lewis, who was named to the first-team all-tournament team along with Oregon Episcopal’s Willmott and Luca Pejovic-Nezhat, finished with nine points.

Cascade Christian, the lowest seeded team at the final site, had an 8-20 record a season ago. Something head coach Morse didn’t want the team to lose sight of in the aftermath of the loss.

“It’s hard because the kids just look at the winning and the losing and losing that game. So I tried to talk to them about the road getting here and how hard they worked all offseason,” he said.

“Trying to give them some words of encouragement and I also talked about life. Sometimes you battle as hard as you can and sometimes someone makes the winning shot on the other team or you don’t make the winning shot. And you’ve got to go on.”

For Oregon Episcopal, it was the first basketball title in school history.

“This is what we’ve talked about doing, but I didn’t know we could actually do it until the buzzer sounded,” said Willmott.