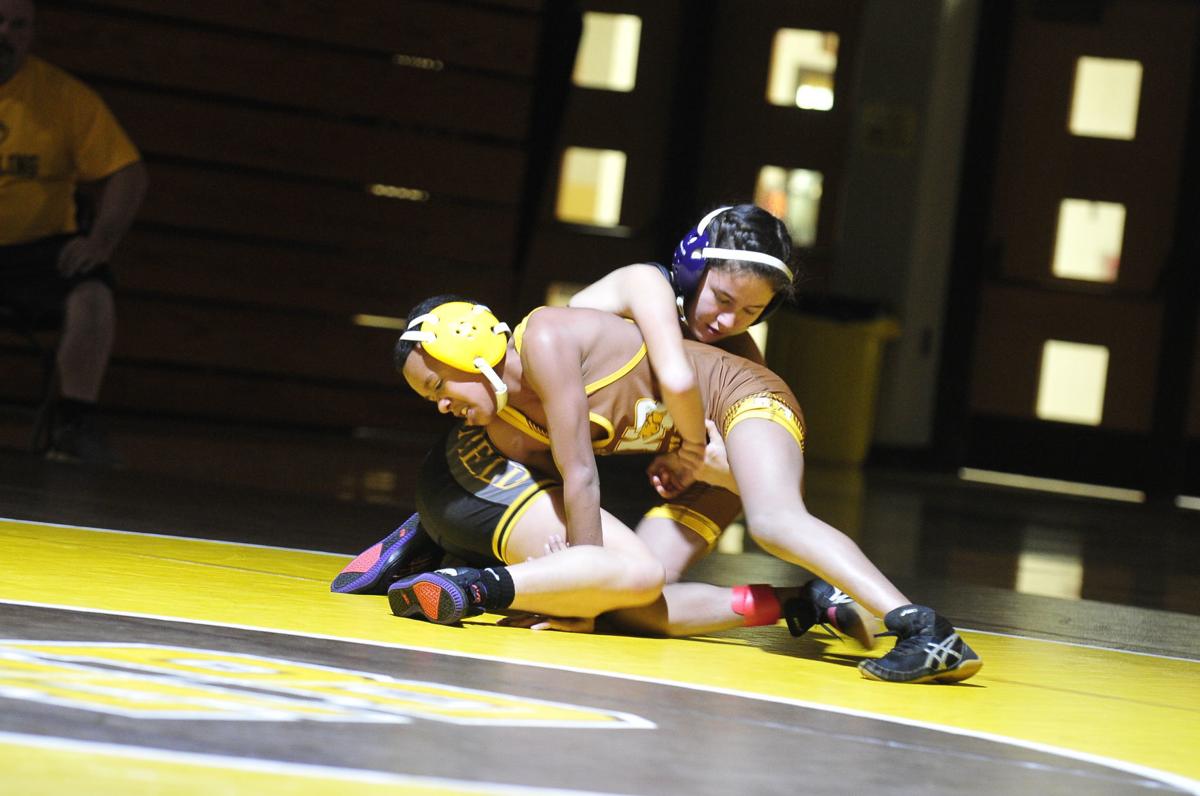 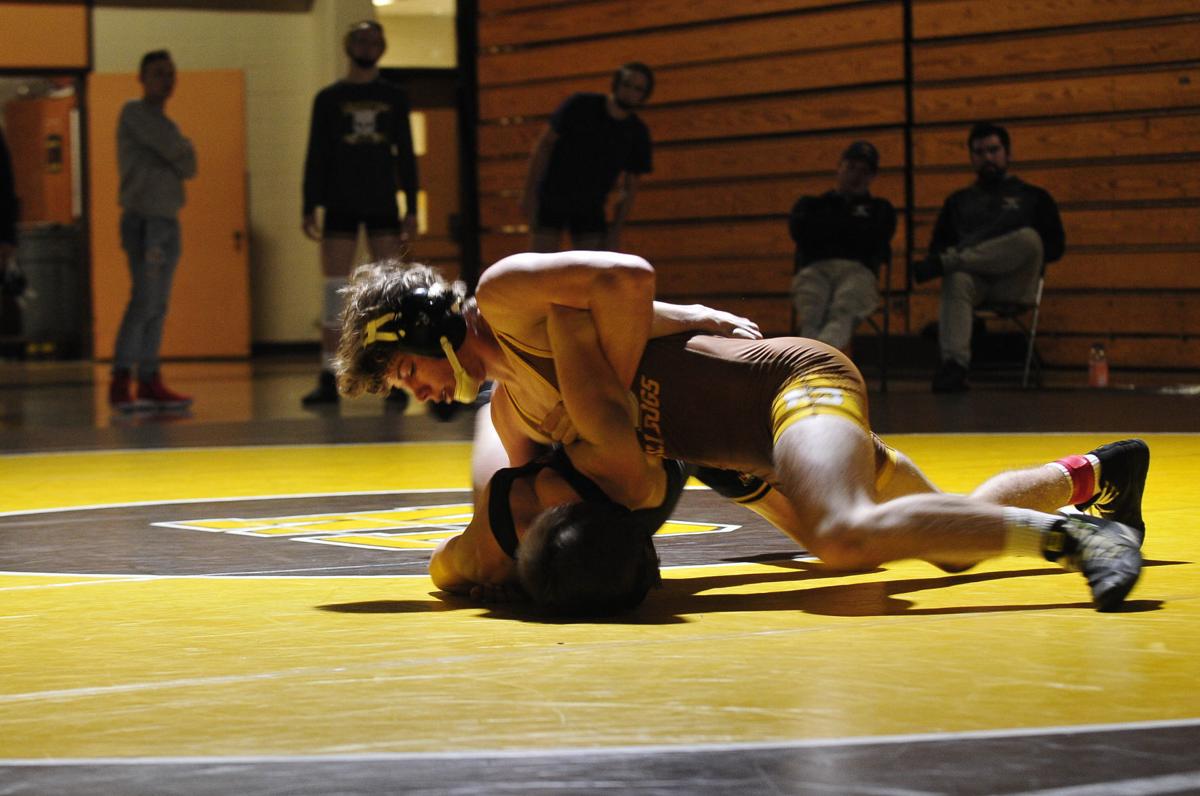 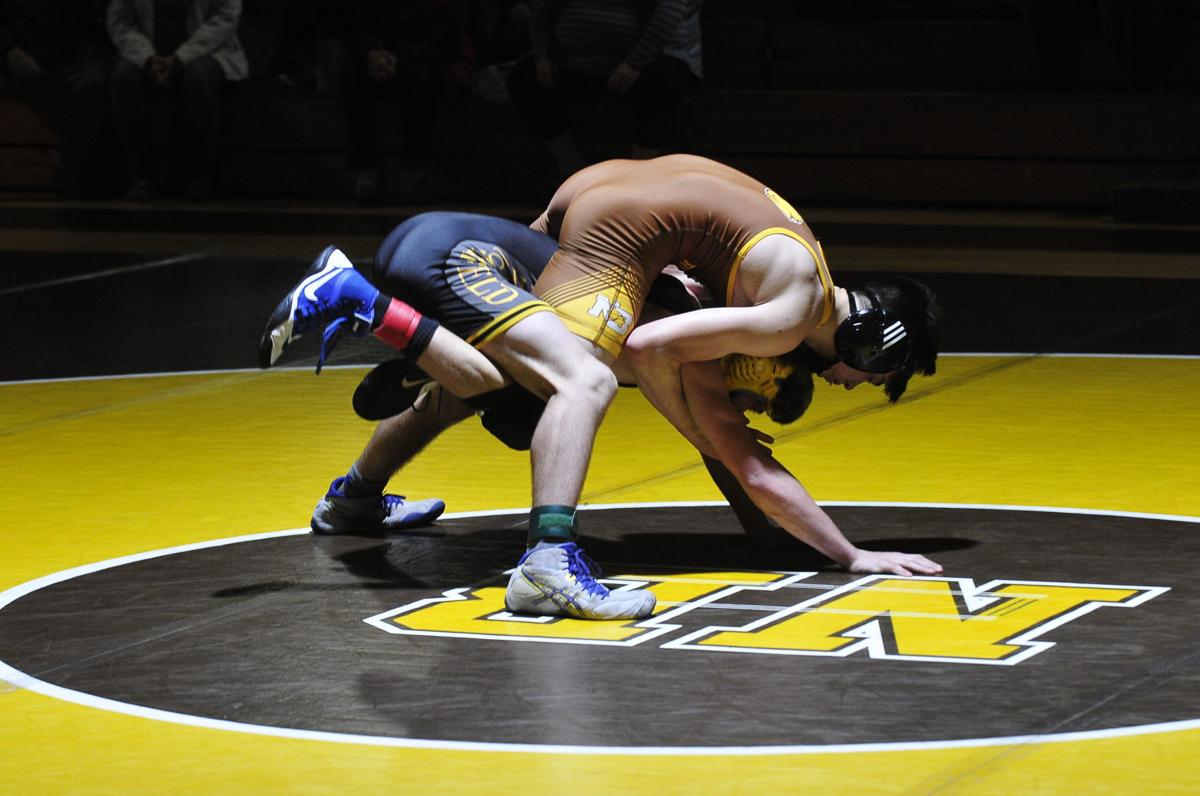 Jonathan Calvert of Marshfield attempts to hold off North Bend's Ethan Ingram on Tuesday night. Calvert went on to defeat Ingram on an 8-6 decision.

NORTH BEND — The latest version of the Civil War went to the Bulldogs. On Wednesday night at home it was North Bend's wrestling team capitalizing on Marshfield forfeits on the way to a 45-25 dual meet victory.

“I think it just says a lot for our team. It gives us a little confidence going forward and it’s been forever (since we beat Marshfield),” said North Bend’s Liam Buskerud, who recorded a pin in the 160-pound weight class.

“I remember my freshmen year getting totally blown out by them, so it’s not deflating anymore when you see Marshfield on the schedule. It’s something where we can say we can roll through this and get ready for the season.”

While four Marshfield forfeits resulted in 24 points for North Bend, Bulldogs head coach Jeff Buskerud was still pleased with what he saw on the mat.

“It helps me to know that we’re building a program that’s improving. We’ve still got a long way to go,” he said. “They have some very good wrestlers on their team that are state-placing caliber. We’re just more of a young team that still has a lot of work to do but it certainly looks promising.”

In addition to Liam Buskerud pinning Romig Beley, North Bend recorded pins from Kevin Garcia in the 132-pound weight class against Marshfield’s Tristan Christenson and from Neal Walter in the 220-pound weight class with his 33-second pin of Logan Griffin.

In a stalemate of a match that saw two stalling calls, North Bend’s Brandon Stinson defeated Isaiah Wright 3-2 in double-overtime at 138 pounds.

The Pirates came away with three pins on the night from three wrestlers who Marshfield hopes, and expects, to see at the state meet. It was Peyton Forbes at 152 with a pin over Tristan Stinson; Tandy Martin with a 56-second pin against Chance Kimball; and Joshua Hinds recording a fall over Jaron Hyatt in the 182-pound weight class.

Jonathan Calvert of Marshfield attempts to hold off North Bend's Ethan Ingram on Tuesday night. Calvert went on to defeat Ingram on an 8-6 decision.

Marshfield also got victories at 106 pounds with Kensey Harlow’s 17-4 win over Reggie Watson and at 126-pounds with Jonathan Calvert’s 8-6 finish over Ethan Ingram.

Trying to find a balance to a team of state-caliber wrestlers and those new to the sport, Strenke is pleased with the direction of his team.

“Always tough when you lose a dual by 20 points but ... we’re right there,” he said. “Guys who have wrestled for two months I’m not expecting to come out here and hit a bunch of stuff. Just to show stuff that we’ve shown at practice and build. ... I think I’m seeing that out of some of the guys and it’s just getting better.

“The North Bend guys, all of them are good, it’s always going to be a tough match with the cross-town rivalry, so coming in here and wrestling hard is what I’m looking for.”

Next on the schedule for the Pirates is the Toledo Invitational on Saturday before heading to the Oregon Classic where they will be one of 65 teams wrestling in Redmond. The Bulldogs head to Sutherlin on Saturday before wrestling Springfield and Churchill next Wednesday.

“We have a couple of tournaments coming up and I want to place as many kids in those tournaments as we can. Placing first to sixth — improving on our team score,” said Jeff Buskerud. “I’m hoping now we’re healthy, we’re moving forward and that we just continue to work on that success.”