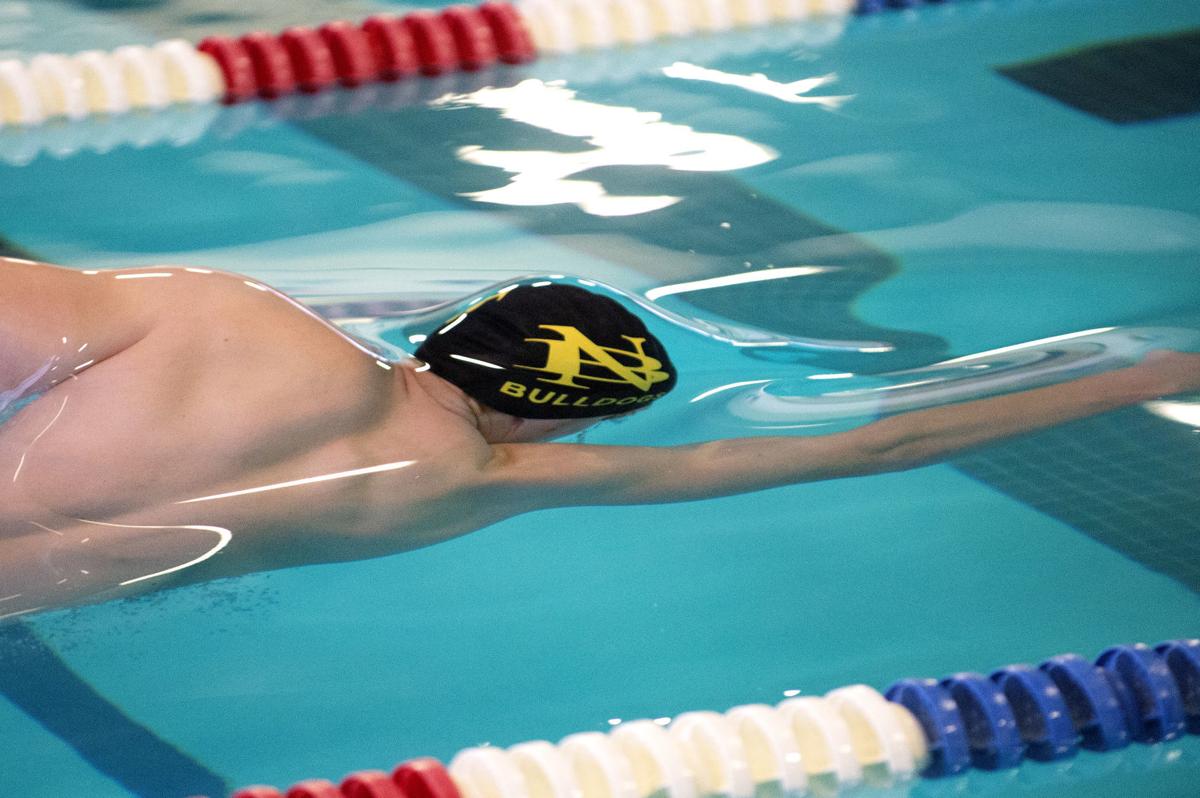 North Bend's Craig Hoefs glides through the water after a turn Friday as he competes in the 500-yard freestyle during a dual against Thurston at North Bend Municipal Pool. Hoefs won the event with a time of 5:24.23. 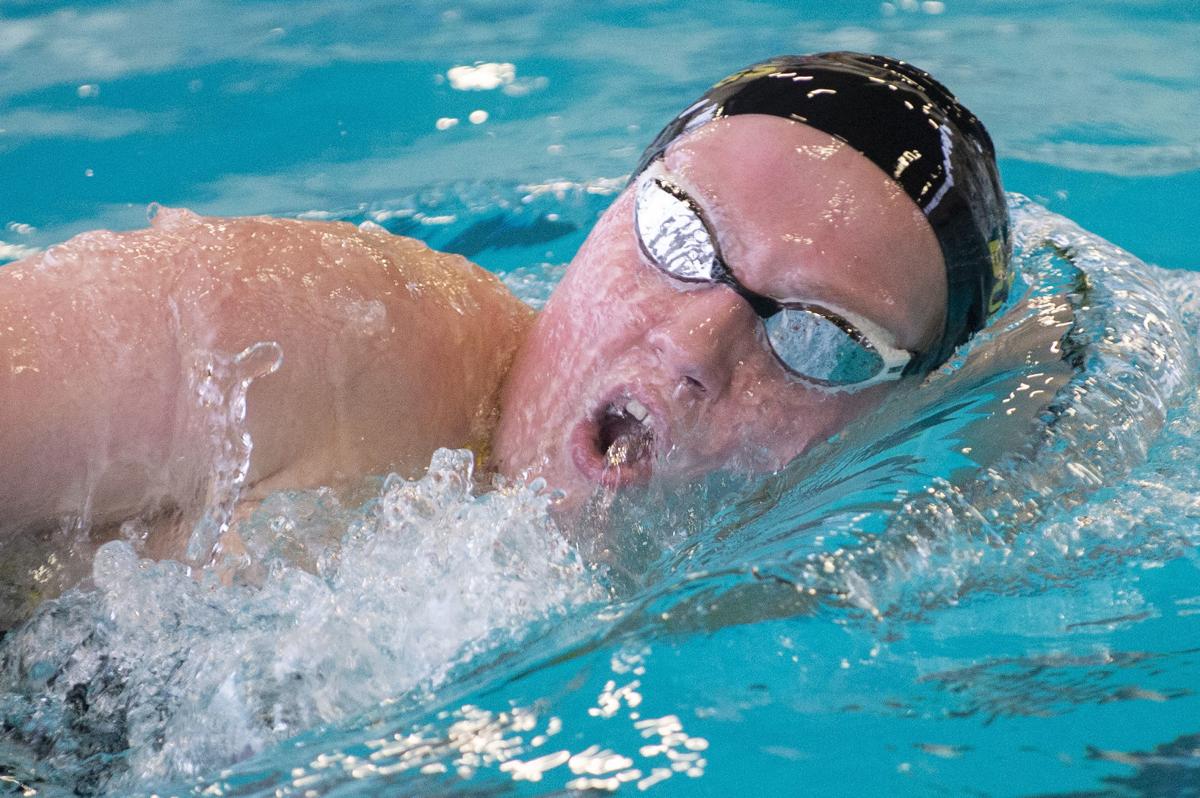 North Bend's Bella Jones competes in the 500-yard freestyle during a dual against Thurston at North Bend Municipal Pool. 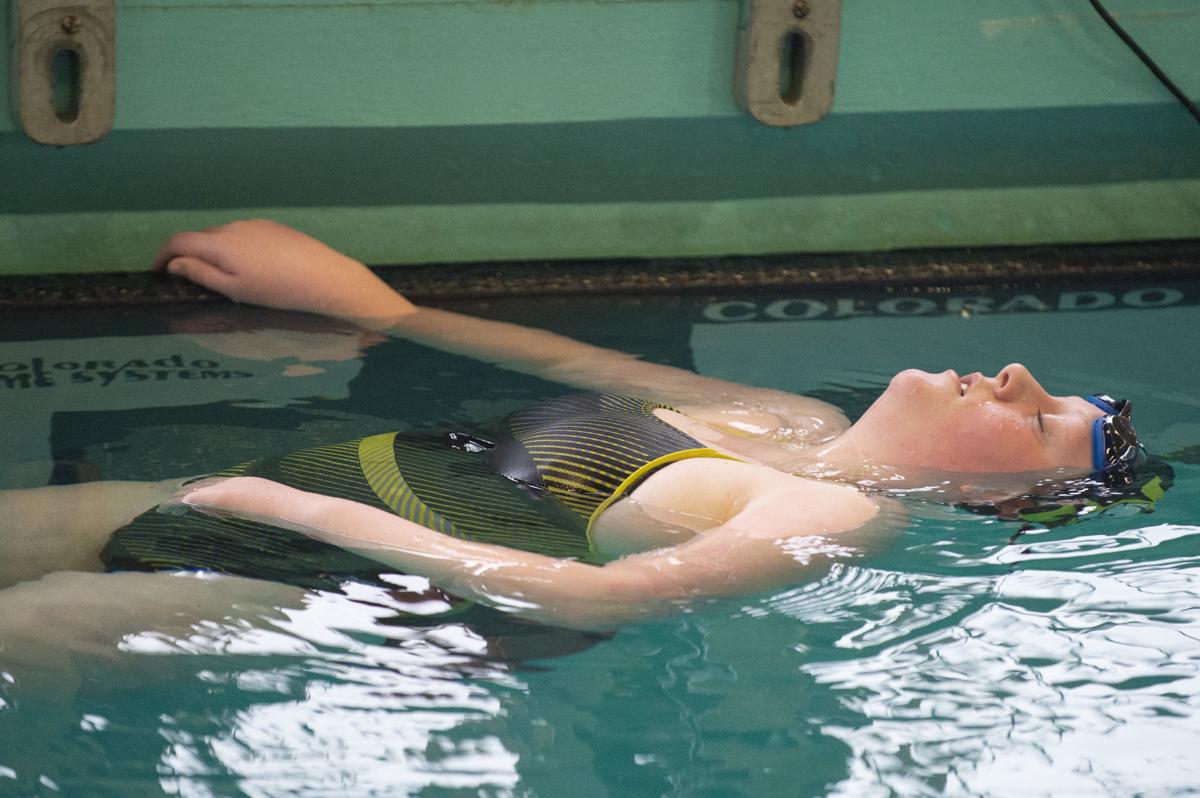 North Bend's Morgan Hoefs rests after swimming the 500-yard freestyle during a dual against Thurston at the North Bend Community Pool. Hoefs was second in the event.

NORTH BEND — Nothing could slow the Bulldogs on Friday night. Not an intense week of practice, not sickness across the team and, certainly, not the undersized Thurston swim team.

Finding energy until the end, the North Bend boys and girls crushed the Colts at North Bend Municipal Pool with the girls winning 127-33 and the boys by a score line of 130-25. Thurston had 15 swimmers at the meet.

North Bend's Bella Jones competes in the 500-yard freestyle during a dual against Thurston at North Bend Municipal Pool.

“I know my last relay when we did the (400 freestyle) we were all so tired but we were all so pumped up. Even though this is a small meet, we were all jumping up and down and we were ready,” said North Bend’s Natalie Cheal, who had a busy day in the pool. Cheal recorded individual wins in the 100 and 200 freestyle while also being on the first-place teams in the 200 medley relay and the 400 freestyle relay.

On the girls side, the Bulldogs had individual wins from Bella Jones in both the 50 and 500 freestyle, Makenna Roberts in the 200 individual medley, Rebecca Witharm 100 butterfly and Angie Allman in the 100 backstroke. Whitney Murray won the 100 breaststroke for Thurston.

“Well we worked them hard,” said North Bend head coach Bruce Rasmussen on the last week of practice. “They had two days of 5,000 meters and two other days of 3,000 meters. And the two days of 3,000 were big sprint days. So they’re tired. Wasn’t expecting a lot of PR’s and we still got them.”

It was more of the same for the boys as the boys dominated across the board. Individually it was Craig Hoefs, Zachary Holt and Mavrick Macalino all recording a pair of wins. Hoefs took the 200 and 500 freestyle; Holt won the 200 individual medley and the 100 breaststroke; Macalino won the 100 freestyle and 100 backstroke.

Tucker Hood took the 100 butterfly for the Bulldogs. Liam Woodward won the 50 freestyle for Thurston's only win.

North Bend's Morgan Hoefs rests after swimming the 500-yard freestyle during a dual against Thurston at the North Bend Community Pool. Hoefs w…

“This week has been tough. We really cranked out the yards and the tough stuff,” said Wood. “Today everybody is still hurting. Pool is hot, everybody is sore but the fact that they all pushed through that mental barrier and still swam best times and were competitive, it’s heartening.”

While pleased with the performance, North Bend’s aspirations go beyond a mid-season dual meet. After both teams claimed third place at the state meet a season ago, Rasmussen believes that this year the team can do that again. And possibly more.

“I’m pleased overall with where we’re sitting right now. We’re going to do well at state, we’re going to take a bunch to state,” he said. “I’m not going to make any prognostications, but I’ll tell you I had a dream, I did, that we would win state.

“There were prerequisites to us doing that. I had to cut my hair … and they have to work hard. And both of those things are happening.”

But before the state meet on Feb. 21 and 22, the Bulldogs will host Hidden Valley, Junction City, North Valley, Phoenix and South Medford at 9 a.m. next Saturday. On Feb. 7 North Bend heads to Cottage Grove for a dual meet. The Midwestern League District meet is on Feb. 14 and 15 at Willamalane in Springfield.

The Coquille wrestling program will hold a banquet and auction on Friday, March 20, at the Coquille Community Building.