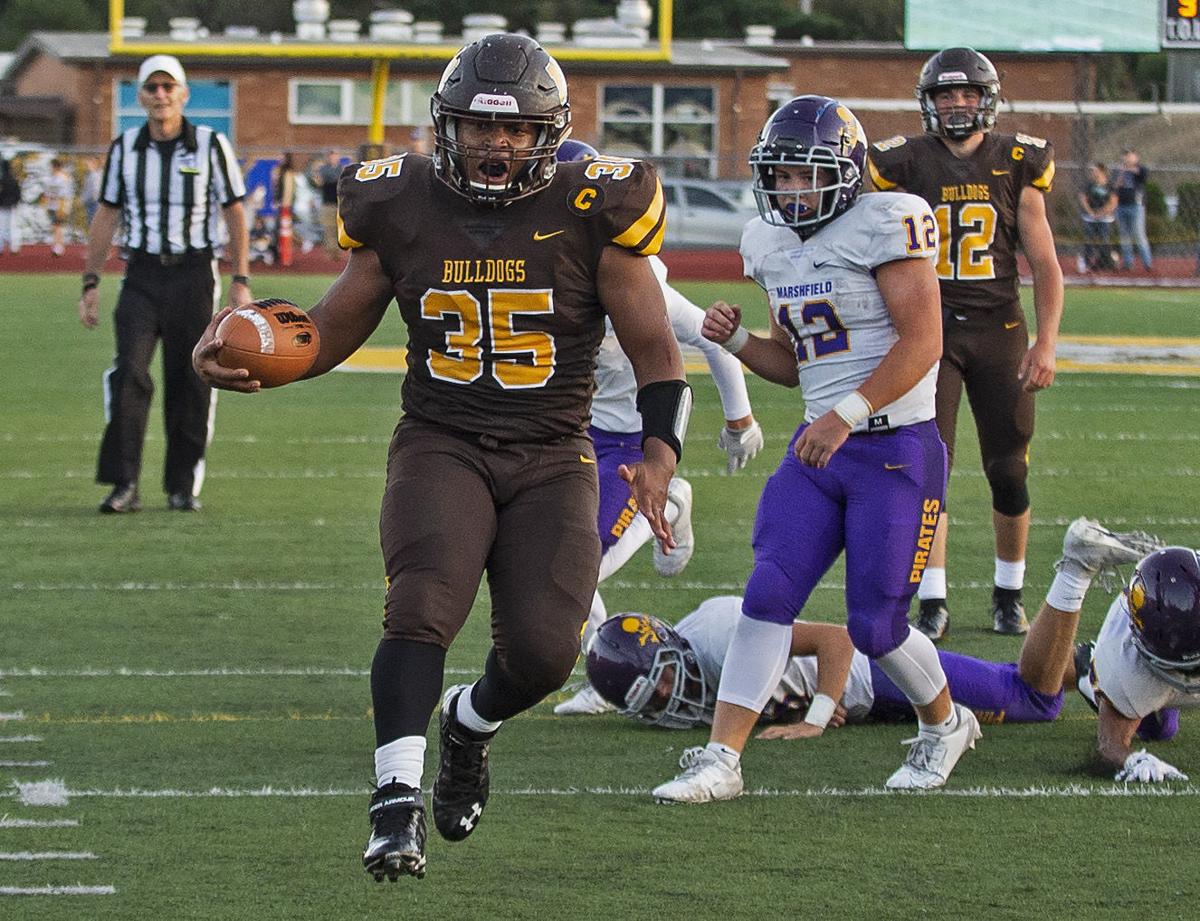 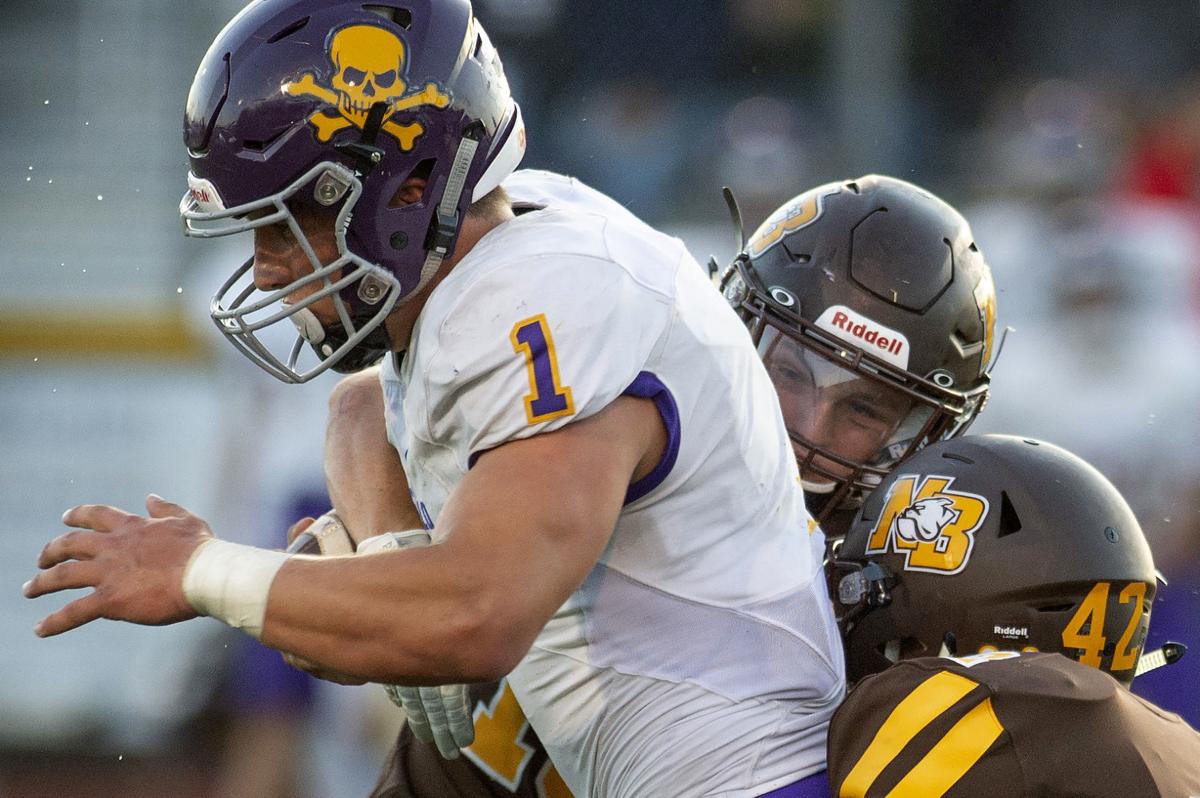 North Bend's Coel Stark strips the ball from Marshfield back Josiah during the season opener between the rival schools at North Bend High School.

NORTH BEND — When you win a rivalry game by 45 points, there’s a lot to be pleased with.

There was North Bend’s Divenson Willis rushing for 142 yards to go with three touchdowns, the Bulldog defense allowing one first down in the first half or even first-time field goal kicker Adam Wood going a perfect three-for-three and six-for-six on point after attempts.

North Bend's Coel Stark strips the ball from Marshfield back Josiah during the season opener between the rival schools at North Bend High School.

But on Friday night in North Bend’s 51-6 home victory over Marshfield at a packed Vic Adams Field, there was one position group that North Bend’s head coach Gary Prince was especially pleased with.

“It all started out with those big guys up front,” Prince said of his offensive line. “Cory Livingston, Jake Hannah, Kobe Johnson, Kai Reasor, Trevor Henderson — it started with those guys. They put a ton of work in this summer and they certainly didn’t skip any meals to get ready for this year.”

Openings on the line allowed the North Bend running game to be firing at all cylinders from the first drive, which was capped with a Willis 9-yard rush up the middle. The combination of space to run and a willing Willis absorbing contact — while requiring multiple defenders to take him down — led to him going through, around and past the Marshfield defense all night.

“Honestly, I love getting hit, but at the same time I know if my team needs me, I’m going to do what I’ve got to do to get those yards,” said Willis, who had 20 rushes on the night in addition to starting at linebacker. Despite the high usage rate, Willis wasn’t worried about fatigue. “I’m high on adrenaline right now, I really don’t care. I’ve been looking forward to this game.”

While Willis was the workhorse, he had rushing support from first-year starting quarterback junior Ian Spalding and fellow running back Jake Posey. Spalding didn’t shy away from contact either, as he put together 15 rushes for 78 yards. Posey had seven carries for 31 yards.

The only North Bend drives that didn’t result in scores came in the first quarter on possessions that saw a goal-line fumble and a punt after a bad snap on third down resulted in a 17-yard loss. With the Pirates still hanging around early, the Bulldogs took off with another Willis rushing touchdown before Spalding made the game multi-dimensional as the passing opened up.

“The added bonus was I thought we threw the ball great. I thought we dropped a lot of passes that should have been caught but I’m really proud with how (Spalding) stepped up and played tonight,” said Prince. “That is what we’ve missed for the last two years, so I feel that is going to give us that added dimension against those teams that want to stack the box from here on out.”

Starting the scoring from outside was Bridger Holmes, who had scores of 33 and 35 yards. He led the team in receiving yards with 88 to go with his five receptions.

With the North Bend offense in rhythm, it was the defense that was locked in from the start.

“Our defense was shutdown. Our starting D was shutting them down,” said Willis.

North Bend held Marshfield to 122 total yards with a big chunk coming on the team’s final drive of the game which saw a touchdown scored by Jason Hinds on a pass from holder Noah Niblett on a botched field goal attempt. The North Bend defense allowed just seven first downs.

“They were ready to play, they were well-coached. I just, even when it came to the screen game, our kids were reading it well. Reacting as we have coached them to react to defend that. Proud of them. They hit hard, they flow to the ball. That’s all you can ask of them,” said Prince.

For the Pirates, Josiah Niblett led the team in rushing with 79 yards on 15 carries. Sophomore quarterback Dom Montiel was 10-of-25 passing for 64 yards.

“We just made too many mistakes and shot ourselves in the foot too many times against a really good football team that is fast and physical,” said Marshfield head coach John Lemmons. “We’ve got to clean things up, fix our mistakes and just get better.”

"I think they're a good football team," he said of the Bulldogs. "We came out not as hard and physical as they did. We just need to come out harder."

"Mentally, we weren't as prepared as we could have been," added Ezra Waterman. "We need to learn from our mistakes in this game. We need to play smarter."

The Pirates will try to do that next week, when they face Gladstone in their home opener at Pete Susick Stadium.

North Bend will be on the road for its only game away from Vic Adams Field in the preseason when it visits North Eugene.