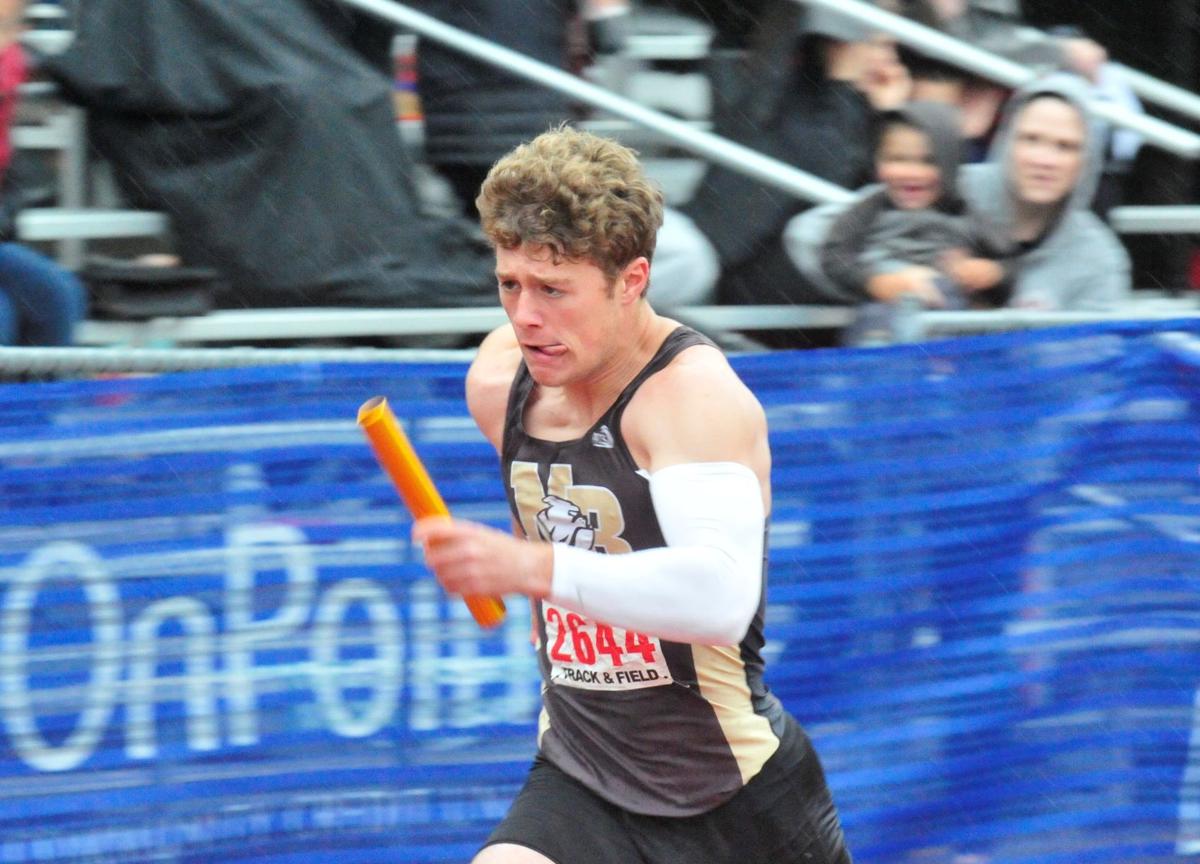 North Bend's Jake Posey sprints down the track on his leg of the 4x100-meter relay Saturday. 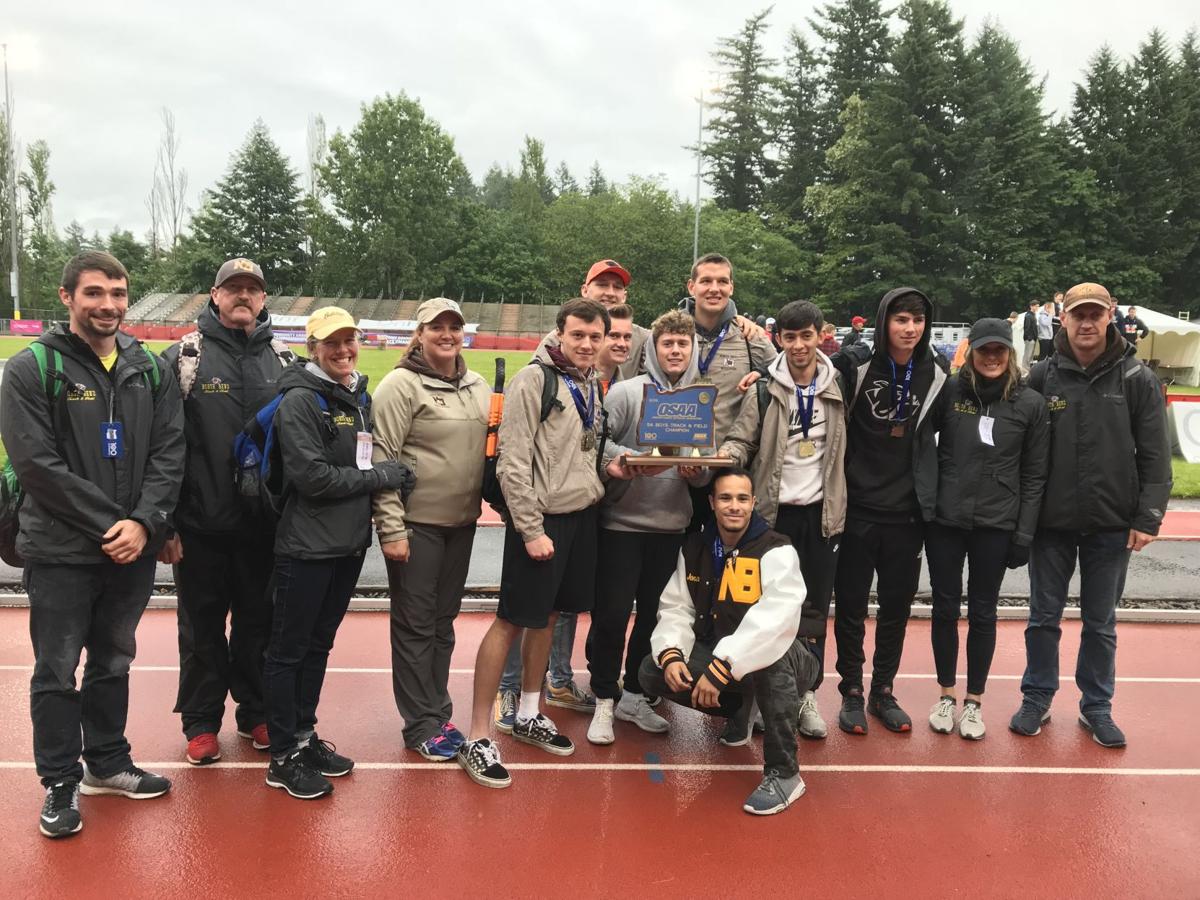 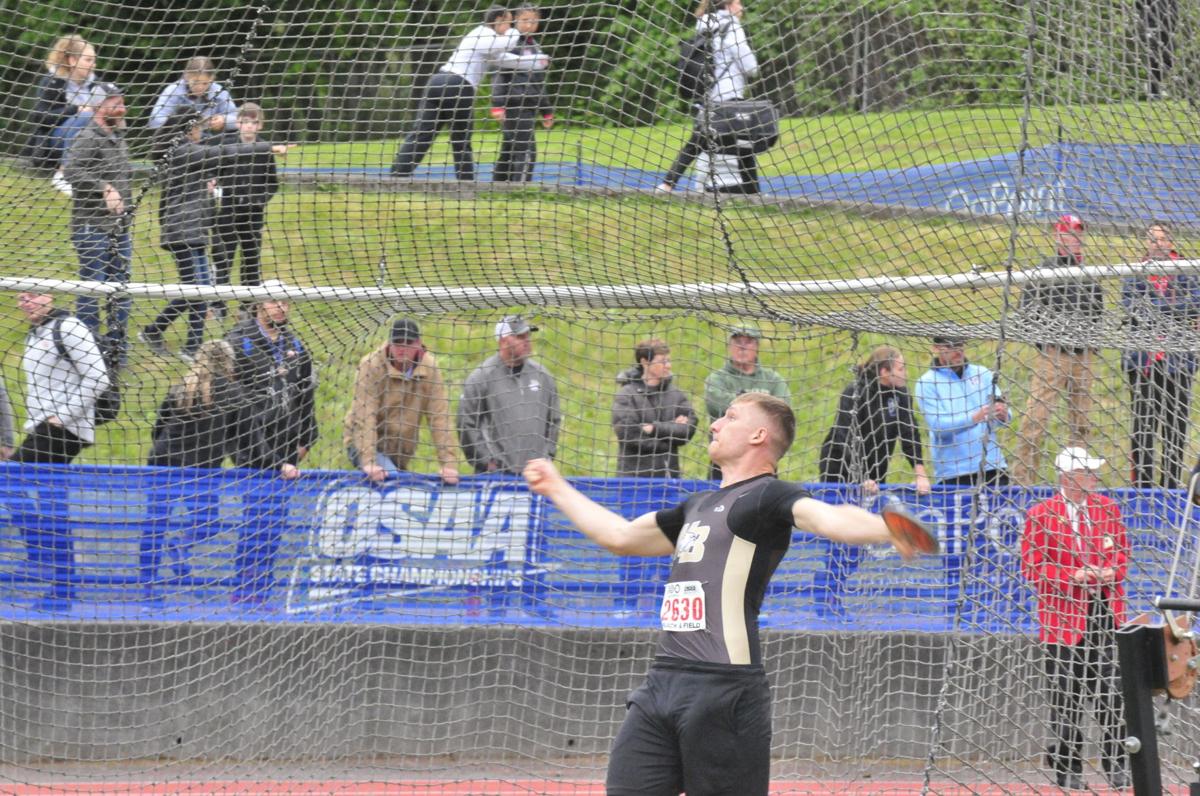 Hunter Bierce lets fly on one of his attempts in the discus on Saturday. He placed fourth in the event for North Bend. 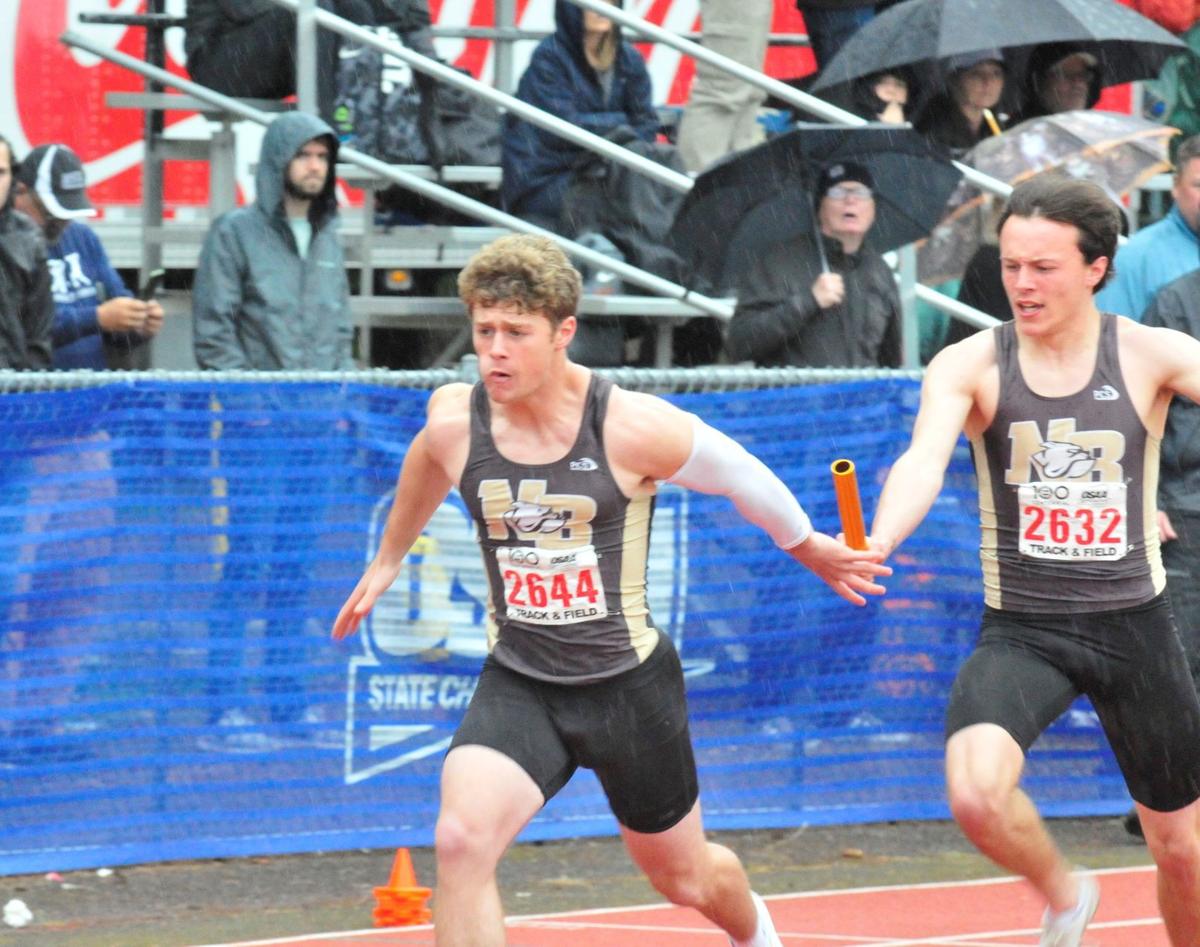 North Bend's Jake Posey takes the baton from Teron Catanzaro during North Bend's win in the 4x100-meter relay on Saturday.

GRESHAM — North Bend capped its first year in Class 5A with a state title when the Bulldogs captured the boys championship on Saturday at Mount Hood Community College.

“We just overperformed everywhere,” coach Jake Smith said after the Bulldogs amassed 72.5 points, beating runner-up and league rival Ashland by 7.5. Silverton was third with 57 and Churchill, a third Midwestern League team, was fourth with 49.5.

North Bend's Jake Posey sprints down the track on his leg of the 4x100-meter relay Saturday.

Over the span of two days, North Bend won three events, adding the 4x100 relay and 100 meters on Saturday to Ty Hampton's javelin win a day earlier, and had athletes place about as well as they could across the board. The Bulldogs had a total of 12 entries in nine events and all 12 placed, many of them higher than they were seeded.

“We showed up and we knew we had a chance,” Jake Posey said. “Everyone had a job to do.”

And they did it.

North Bend’s day got off to a great start in back-to-back events.

Just before the rain started, Hampton and Hunter Bierce finished third and fourth, respectively, in the discus.

Hampton was firmly in third place with his throw of 154-7, but Bierce was in ninth heading into the fifth round. That’s when Bierce uncorked a throw of 154-2 to move up to fourth. A few minutes later, Hampton had his biggest mark of the day, 160-7.

Afterward, Hampton said he was happier for his fellow senior teammate.

“I really wanted Hunter to perform well,” he said.

Bierce said it was a relief to get a big throw in.

“I knew that I had been making some big throws in practice and had been consistently hitting big marks — I just hadn’t hit it in a meet yet,” he said.

Hampton said he wanted to win, but couldn’t match the bigger throws by West Albany’s Aiden Paul (169-2) and Hood River Valley’s Henry Buckles (167-4). After his throw in the fifth round, he was eager for another big effort on his final throw, but slipped as he started to turn and wasn’t able to stop himself from leaving the ring so he could wind up and try again.

“I’m such a competitor that I didn’t want to give up that spot,” he said of having a chance to maybe move up.

But all along, he was keeping a close eye on his teammates and North Bend’s chances and celebrated with Bierce as they watched North Bend’s relay team win.

Teron Catanzaro, Posey, Martin Godinez and Jonathan Chilcote won in 43.13 seconds, with Catanzaro getting the Bulldogs off to a good start and Posey giving them a commanding lead with a blazing second leg. Godinez kept the advantage, but Chilcote started too quick and almost had to come to a complete stop to receive the baton in the zone.

That goof cost the Bulldogs a chance at the school record in the event, but the runners were just thrilled to win.

“I feel we would have gotten the school record, but I’m still happy with how we did,” Chilcote said.

Godinez said he felt pressure to keep the lead after Posey’s great leg, while Posey said he wanted to do well because the other three are seniors while he is just a sophomore.

From there, the points kept coming.

“Obviously, winning the 4x100 gave us a lot of positive energy,” Posey said.

Chilcote won the event for the second straight year.

Hunter Bierce lets fly on one of his attempts in the discus on Saturday. He placed fourth in the event for North Bend.

“It’s awesome to come back and be champion in 4A and also in 5A,” he said.

And a short while later John Efraimson finished fourth in the 400 meters, continuing his recent stretch of personal improvements with a time of 50.98.

“It’s unreal,” said Efraimson, adding that he expected a best in the 53-second range when the year started. “I’m really happy with how I did. And I’ve got three more years.”

Efraimson said he was driven to do better by the success of North Bend’s team.

“It pushed me to do good,” he said. “It’s fun watching my teammates do well.”

Posey had come in as the eighth seed in the event and also had hoped to place better in the 100.

“I was a little angry with myself and I wanted to do a little better,” he said.

At that point, nobody could catch North Bend.

Ashland put some pressure on the Bulldogs when Evan Holland had his second meet record in two days, taking the 1,500 meters in a new record 3:51.92, with teammates in third and fifth place.

North Bend’s girls also got one win Saturday, when Chelsea Howard won the triple jump to go with her long jump title a day earlier.

Competing in a steady rain and interrupted by the 100-meter final, where she placed seventh, Howard’s best leap was 36-7, more than a foot under her best.

“It would have been nice to PR or get into the 37s, but this weather is definitely not ideal,” Howard said. “It’s great to go from eighth last year to winning this year. It’s surreal.”

And while Howard would have liked to place higher in the 100, she was happy to move up from her eighth-place finish last year.

“I’m happy to place,” she said. “Making it to the finals in the 100 was the most tense moment of the meet.”

North Bend also got points in the discus, where Annika Strasman was sixth with a throw of 110-11.

“I’m happy to finally score some points,” she said. “I’ve made it to state the past two years and been on the cusp of placing.”

Strasman had been seeded third, but none of the throwers had particularly strong marks. Milwaukie’s Savanna Ramirez won with a throw of 118-5 and nobody else was better than 112-9.

“Nobody did how they expected,” she said, adding that she can’t use the weather as an excuse. “I practice in the rain all the time.”