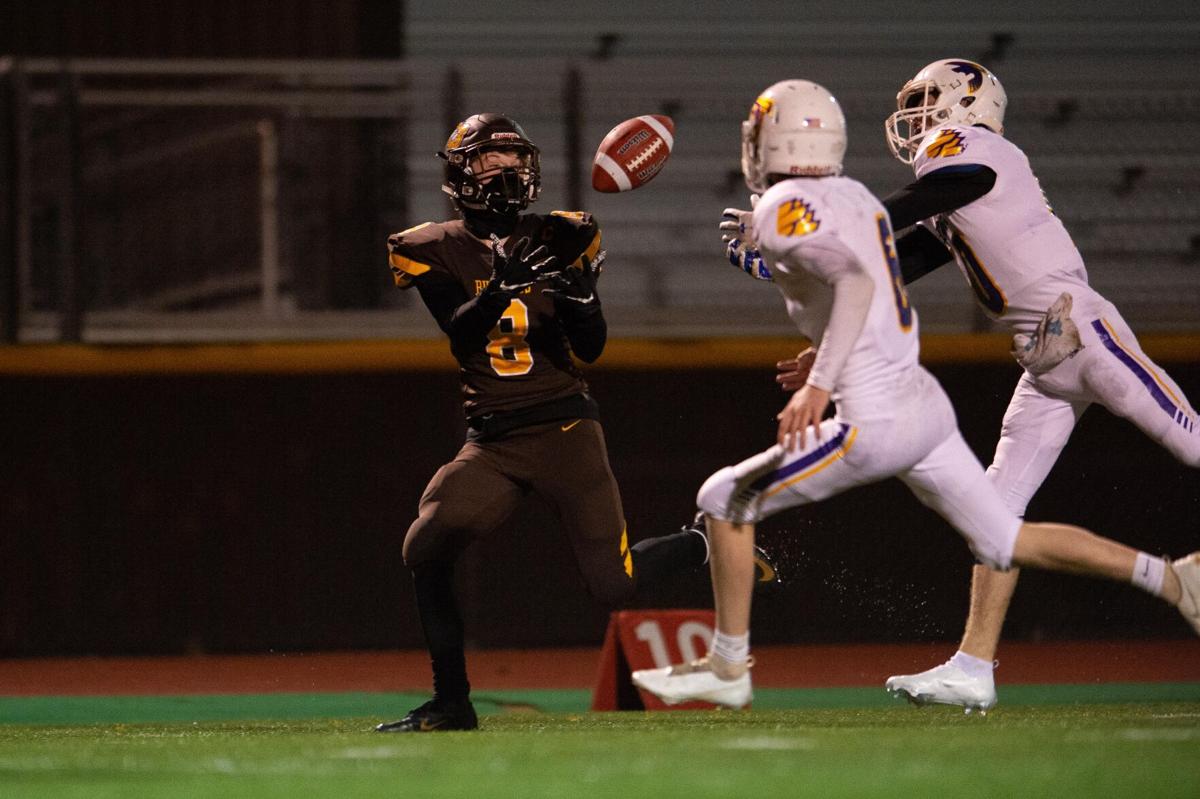 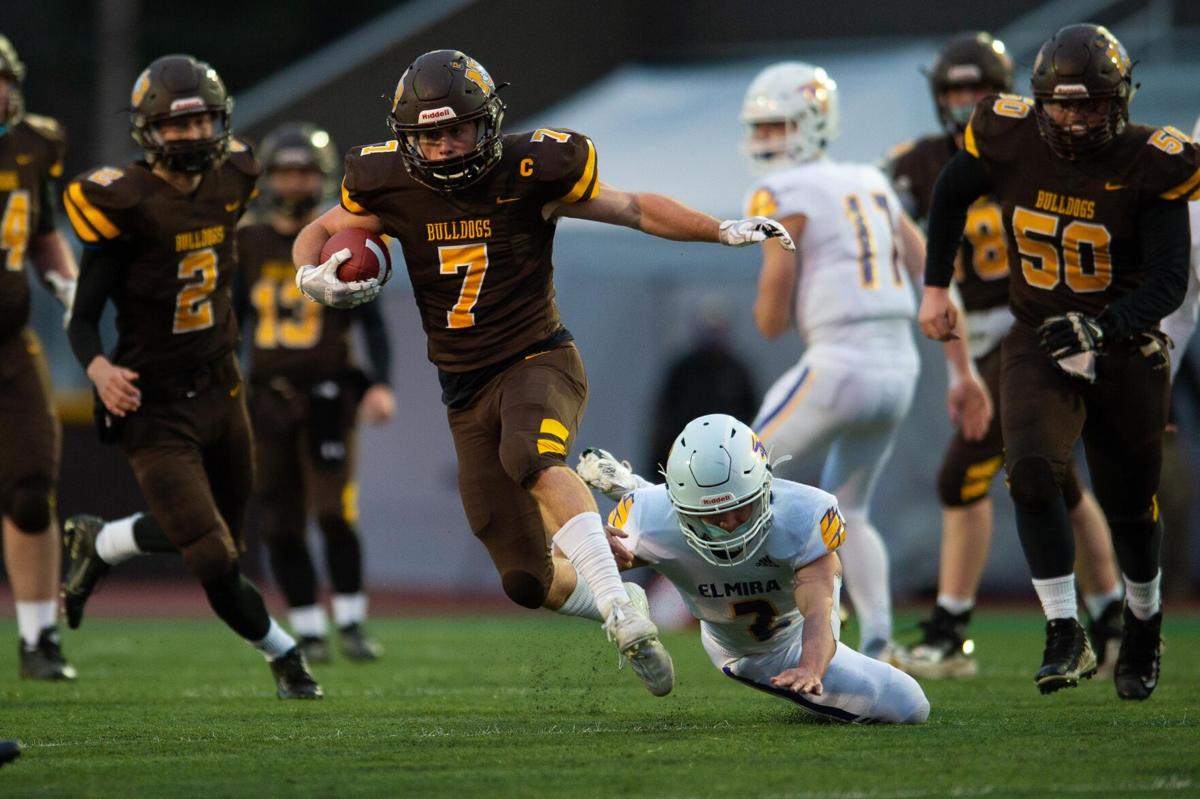 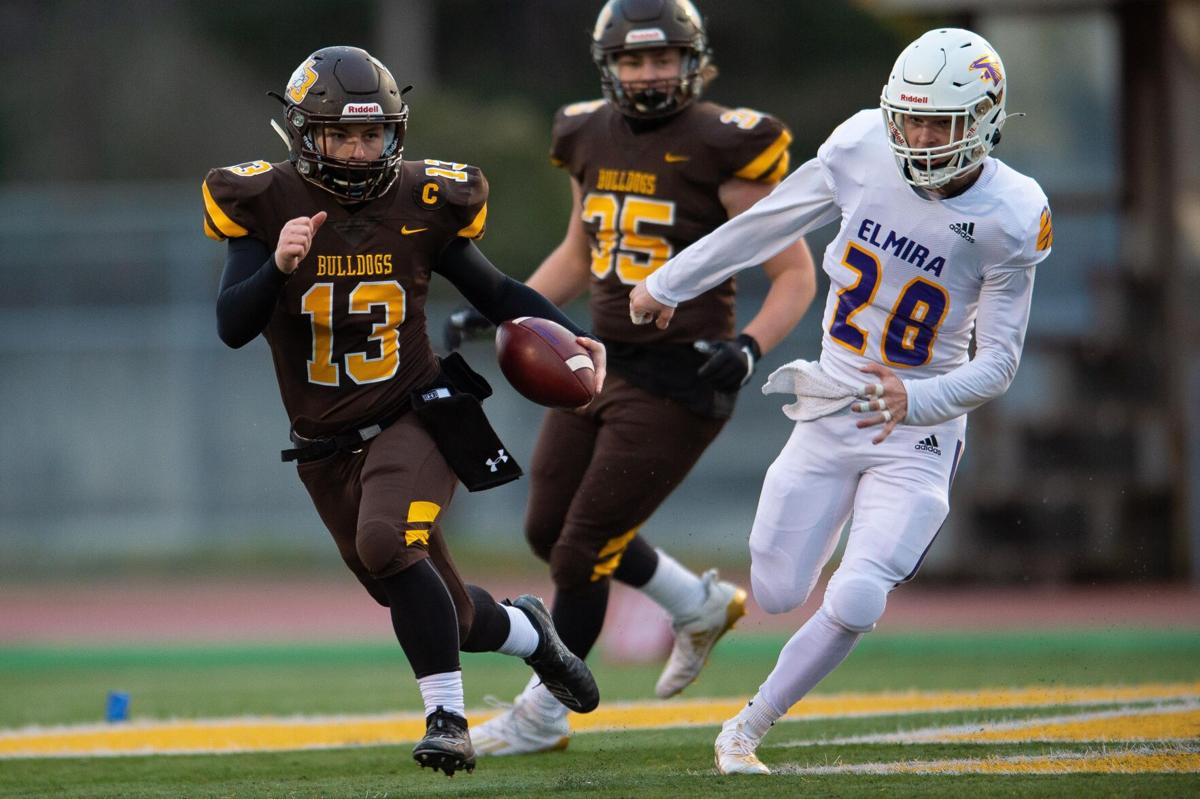 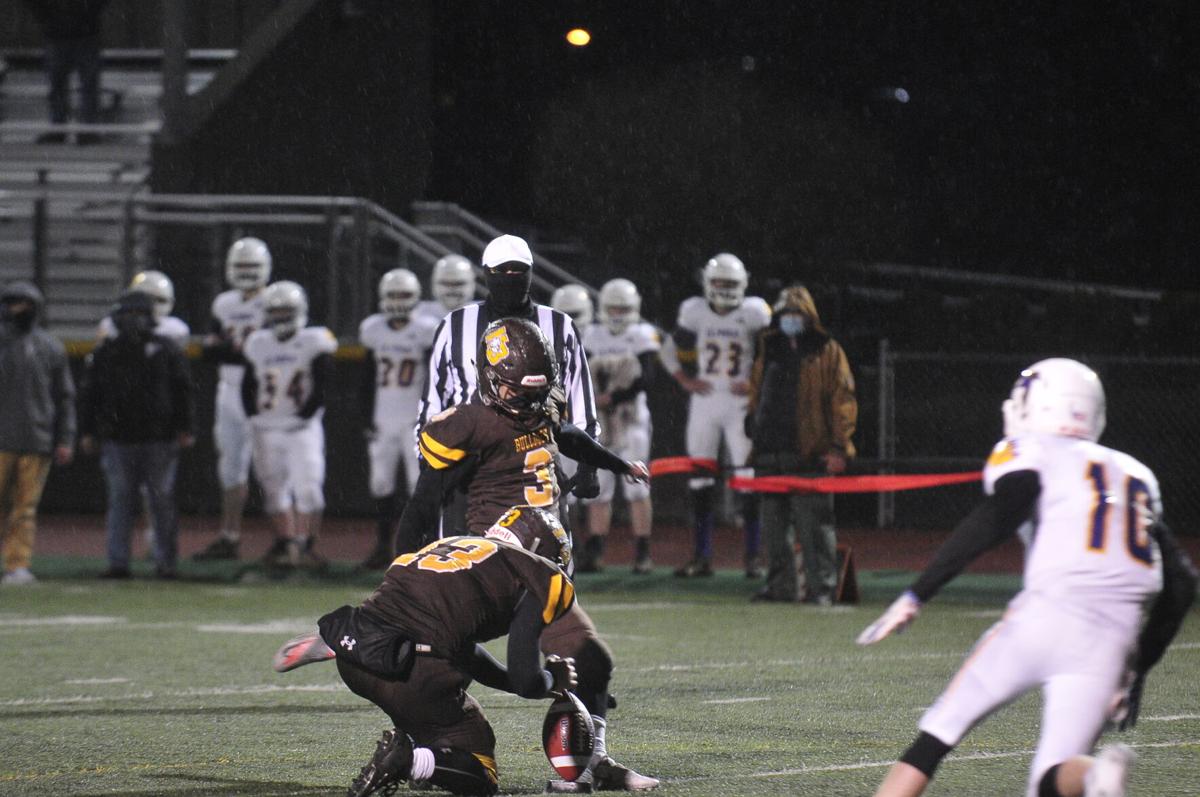 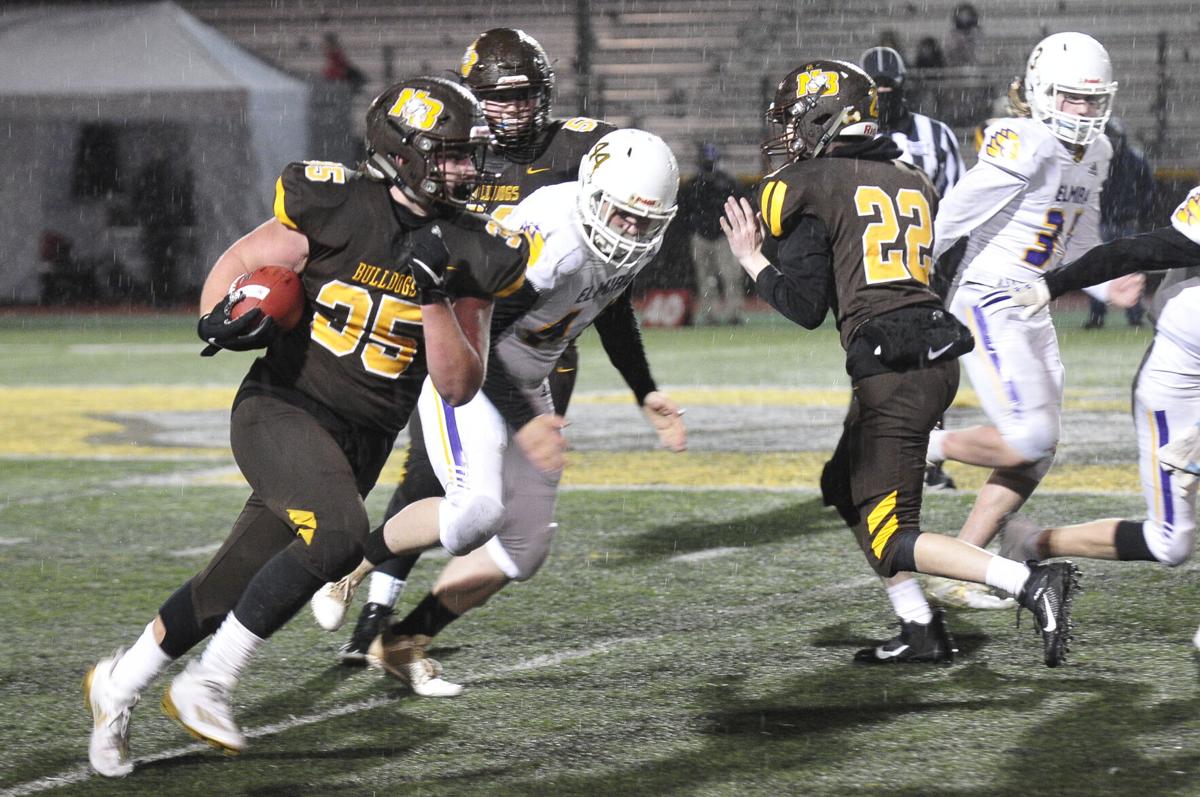 Kavan Robinson races upfield in the rain for North Bend during Fridays' win over Elmira.

Kavan Robinson races upfield in the rain for North Bend during Fridays' win over Elmira.

NORTH BEND — The North Bend football team is getting better every week, fixing elements that need improving as they head into the tough second half of their season schedule.

On Friday night, the improvements helped the Bulldogs to a 48-6 win over visiting Elmira at Vic Adams Field as North Bend improved to 2-1 heading into Friday night’s annual battle with crosstown rival Marshfield at Pete Susick Stadium.

The Bulldogs scored the final 41 points Friday night to pull away after the two quarterbacks — Coleman Compton for the Bulldogs and Cobyn Herbert for the Falcons — scored the first two touchdowns.

Jake Posey was a beneficiary of that offensive line, with two long touchdown runs for the second straight week. On Friday, the two TDs covered 24 and 68 yards.

“They are really kicking butt up there,” he said. “They are down in the trenches doing their job.”

When that happens, Posey said, it reflects in his success running the ball.

North Bend appeared headed for a 21-6 halftime lead before Compton had a scrambling 38-yard touchdown run in the final two minutes of the first half.

Compton added a 34-yard TD pass to Liam Buskerud in the third quarter and then scored his third touchdown on a short run to enact the running clock with the Bulldogs up by 35 points later in the quarter.

Kavan Robinson scored North Bend’s final touchdown after he denied Elmira a second score by recovering a fumble by the Falcons.

Prince said the Bulldogs still have plenty to work on as they head into a finishing stretch that includes Marshfield, Lebanon and Class 6A Grants Pass, the first two on the road.

He mentioned specifically doing a better job of maintaining the edge and covering deep passes on defense and getting the center-quarterback exchange down better on offense.

The latter, though, was a huge improvement Friday night, Compton said.

“There was a lot of good that came out of this game and very little bad,” he said, assessing North Bend’s overall effort. “We had one bad snap. That was it, aside from too many penalties.”

Against Baker, Compton said, about 20 percent of the center-to-quarterback snaps were either poor or mishandled by the QB.

Another big plus Friday: No turnovers.

“That’s huge,” Prince said. “That’s something we’ve been talking about for a few games.”

As for North Bend’s defense, which had its second straight strong outing, Posey credited the group effort.

“We worked well as a team, same as last week,” he said. “It’s always better when you work as a team.”

After the game, players and coaches alike were looking forward to the game with Marshfield.

“I think it’s going to be a lot of fun,” Posey said, adding that the Bulldogs would spend the week watching a lot of film and trying to clean up little mistakes.

“You don’t have a football season without this rivalry,” Compton added. “It’s something you look forward to.”

Prince has coached on both sides of the rivalry and said it’s always a fun contest.

“If you grew up in the Bay Area, it’s what you do,” he said. “You play against the guys from Marshfield or the guys from North Bend.”