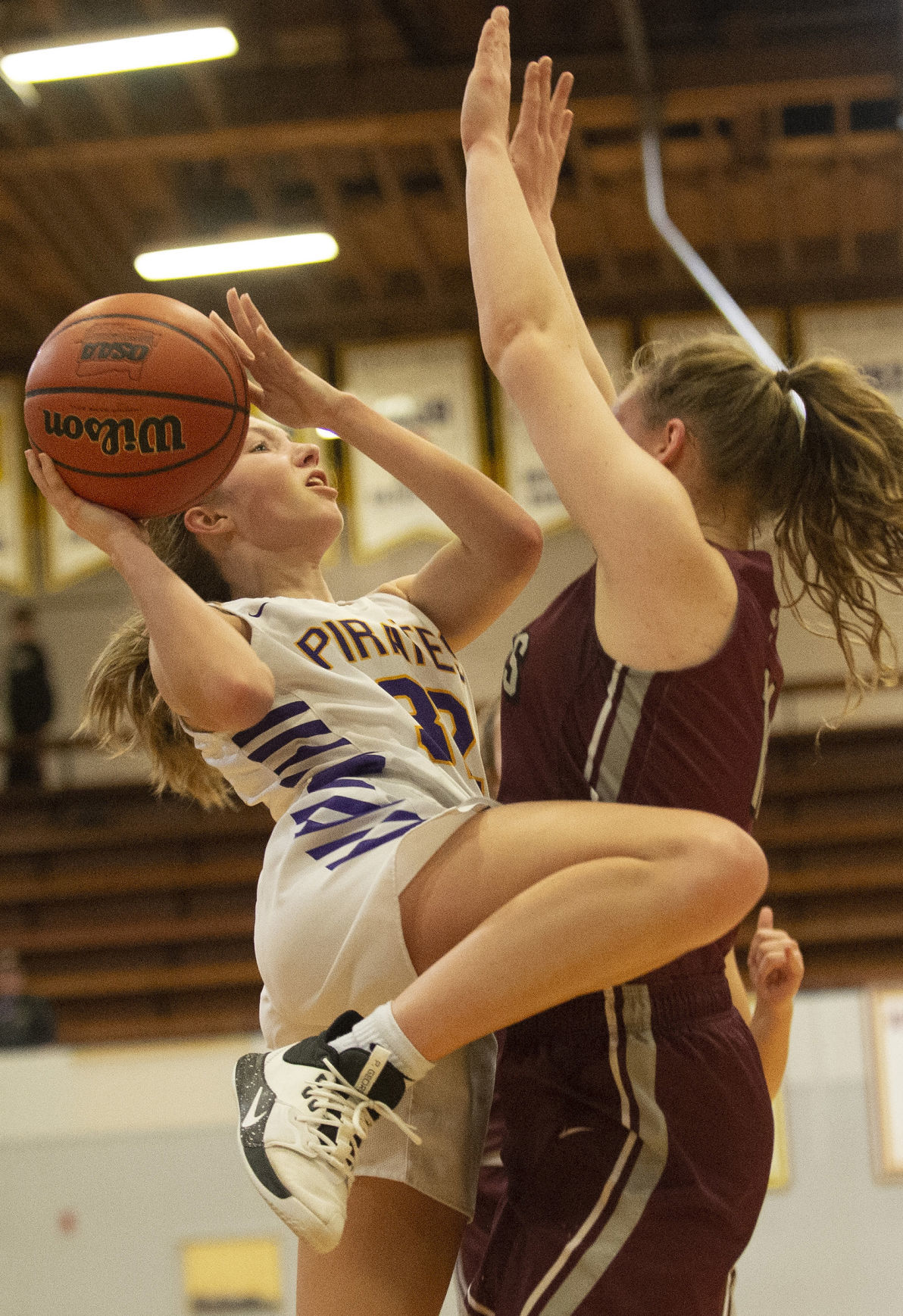 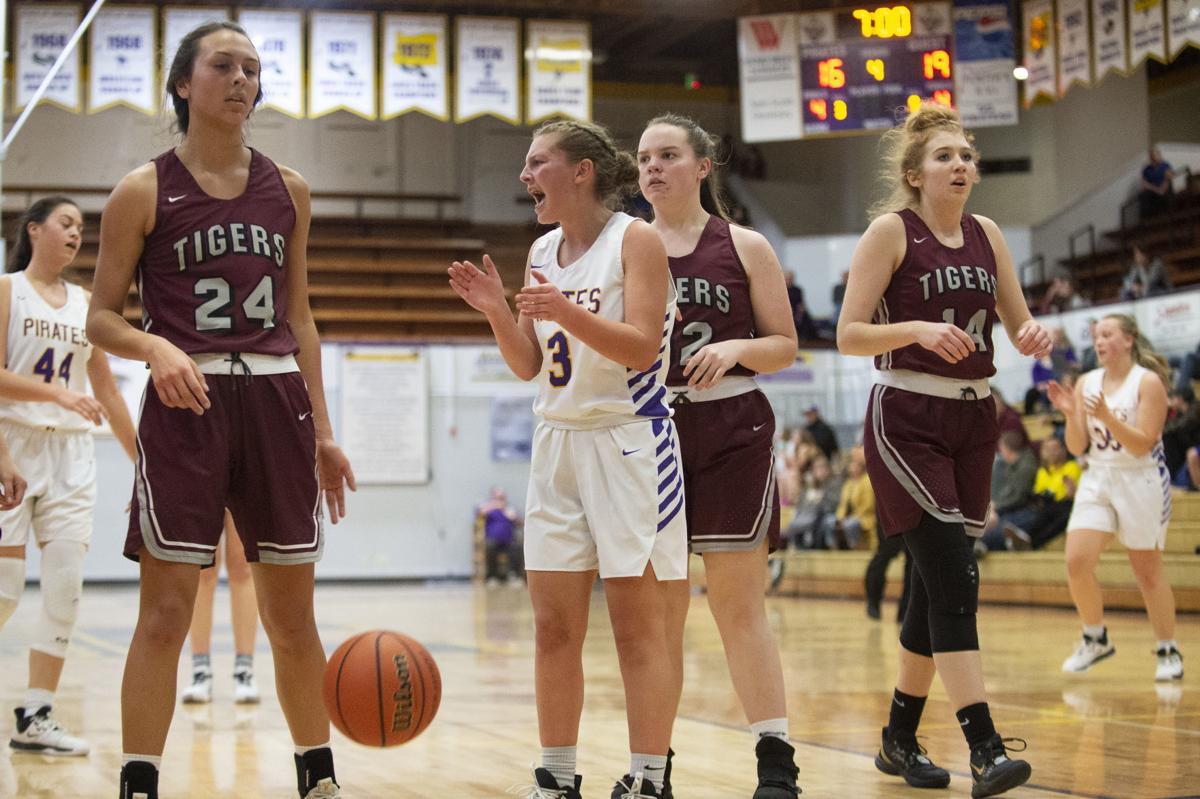 COOS BAY — The girls basketball teams from Marshfield and Junction City pride themselves on defense.

The difference when they met Tuesday night in a Sky-Em League battle at Pirate Palace was three consecutive 3-pointers by the Tigers in the fourth quarter as Junction City left town with a 37-28 victory.

Kate Miles pulled the Pirates within 19-18 when she had a steal and scored with 7 minutes to go.

But on the next three possessions, Junction City got two 2-pointers by Jada Fuller sandwiched around one by Ashlynn Long — neither player had scored in the first three quarters — and the Tigers were in front by at least five the rest of the way.

“We have a lot of kids who do different things for us,” Junction City coach David Thompson said of the freshman and sophomore who combined to score the first 14 points of the fourth for the Tigers.

The suddenly hot shooting was the exception to the rest of the night. Junction City, which entered the fourth shooting 20 percent, finished 11-for-40 (27 percent), but surprisingly 5-for-13 from 3-point range. Marshfield, which was under 20 percent entering the fourth, finished just 8-for-36 (22 percent).

“We just can’t score,” Marshfield coach Bruce Bryant said of his team’s biggest challenge. “Scoring night in and night out is such a labor — to manufacture points and get a flow going.”

On Tuesday it cost the Pirates on a night when they again were pretty solid on defense.

“I was really happy with our defense,” said Kaylin Dea, who led the Pirates with 10 points. “I thought it went really well.”

The Tigers had taken a lead in the first half in part because of two 3-pointers by Cienna Hartle. The Pirates came out in the second half with a triangle-and-two look focused on Hartle and Brenna Wilson and it stymied the Tigers through the third period.

“They threw a lot of defensive looks at us,” Thompson said. “I thought we adjusted well.”

Like the Pirates, he was pleased with his team’s defense.

“We really stress defense,” he said. “We really played well as a team.”

The Tigers twice forced Marshfield into five-second turnovers on inbounds plays and the Pirates ended up committing 19 turnovers in all.

“It was a good effort,” Bryant said. “We worked hard. But we had way too many turnovers. Those hurt you.”

He noted that the Tigers apply the best pressure of any team in the league, and did that well Tuesday.

On the flip side, Marshfield took away another of the Tigers’ strengths after the opening minutes.

“One thing they do well is offensive rebound,” Bryant said.

The Tigers had five early offensive rebounds, but only six more the rest of the game and Marshfield won the rebounding battle overall.

But the Pirates, hampered by injuries and illness, including to Kiana Holley, who was unavailable Tuesday after hitting four 3-pointers in a win over Elmira, suffered from their short bench.

“Fatigue played a role in our mental mistakes in the fourth quarter,” he said.

Hartle finished with 14 points and Fuller scored nine for the Tigers. Charlie Dea had nine points to go with her sister’s 10 and Miles had seven for the Pirates.

The win was a big one for the Tigers in the opening game for the second round of league play. Junction City improved to 4-2 and the Pirates fell to 2-4.

Junction City got its third win over Marshfield, having also beaten the Pirates in Marshfield’s tournament in December.

“Both teams have improved a lot,” Thompson said, comparing his Tigers and the Pirates to that first meeting.

Marshfield now will focus on finishing strong. If the Pirates can beat Elmira and Siuslaw, and maybe second-place Marist Catholic in their final three games, all at home after Friday’s trip to league-leading Cottage Grove, they will earn a spot in the league playoffs.

And if they can finish in the top 20 in the Class 4A power rankings (they entered the week at No. 21), they can get into the Class 4A play-in round, which Bryant said would be big for his young squad.

“I told the girls our goal is to get a ranking of 20th,” he said. “Then we can get another game for the seniors and a chance for our younger girls to get a game in a playoff atmosphere.

“We’ve just got to keep getting better.”