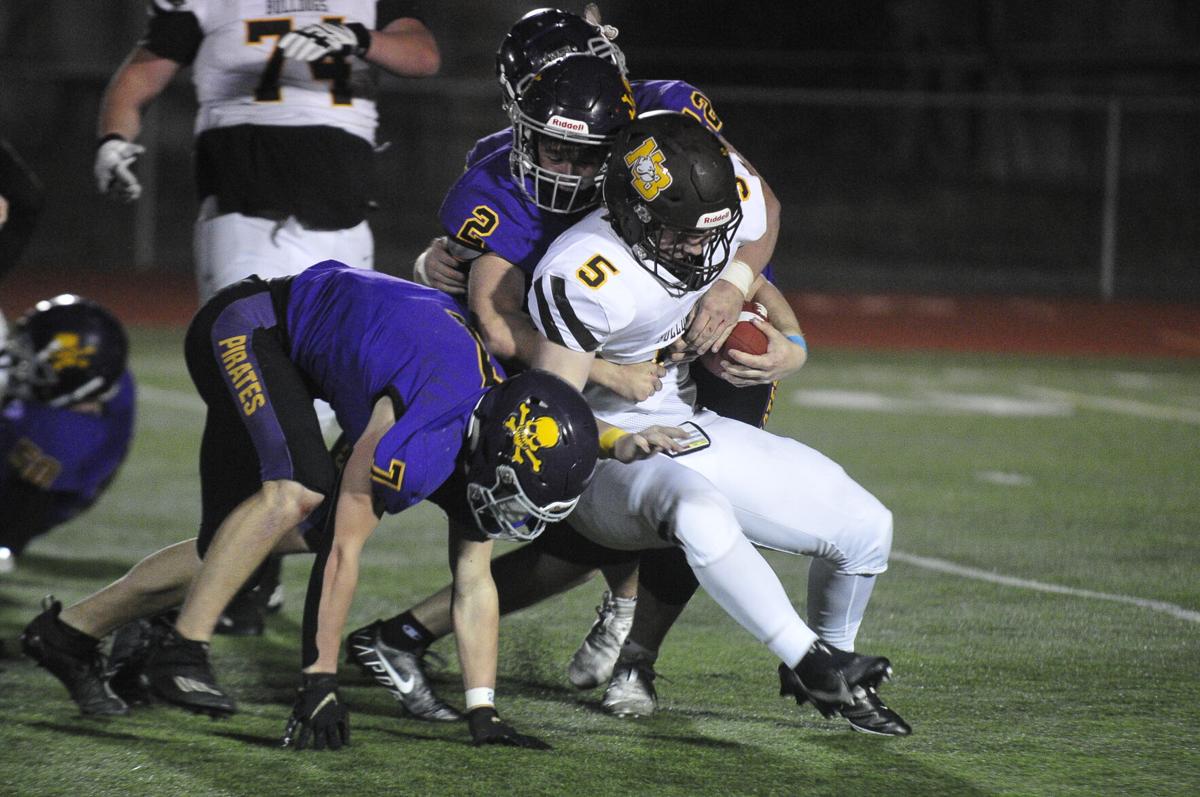 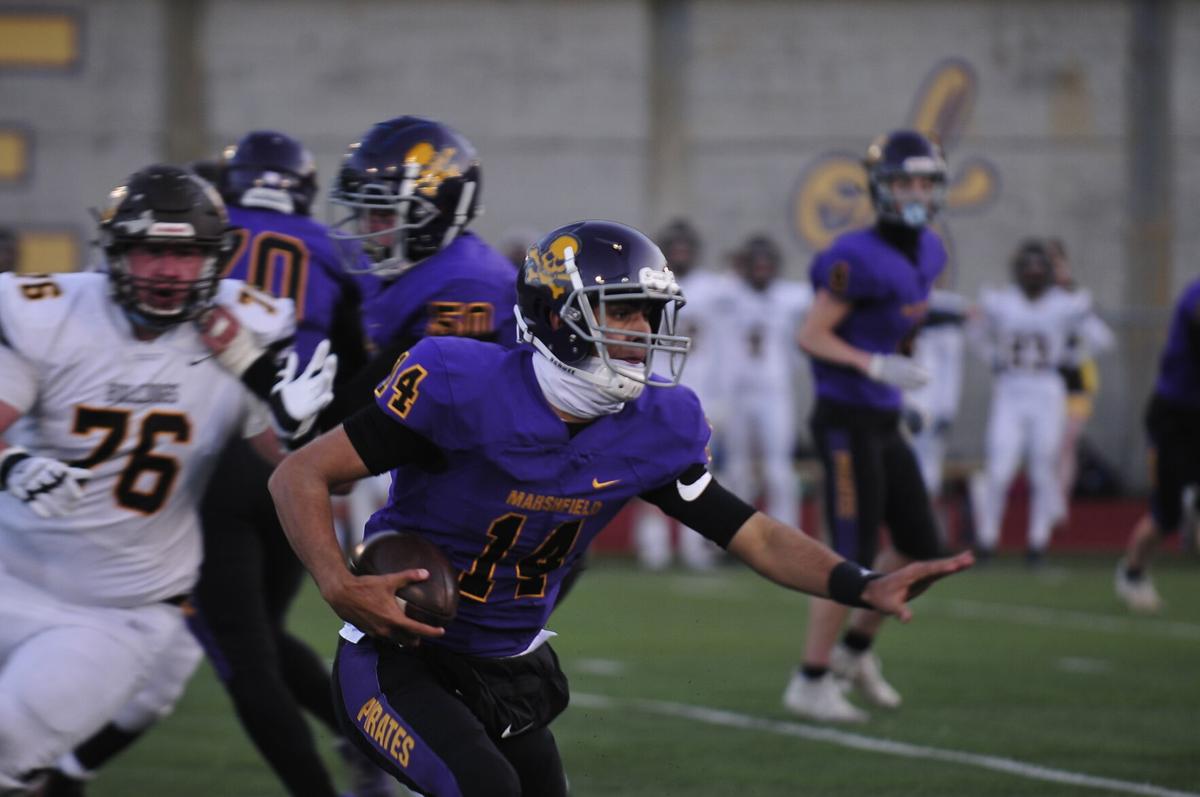 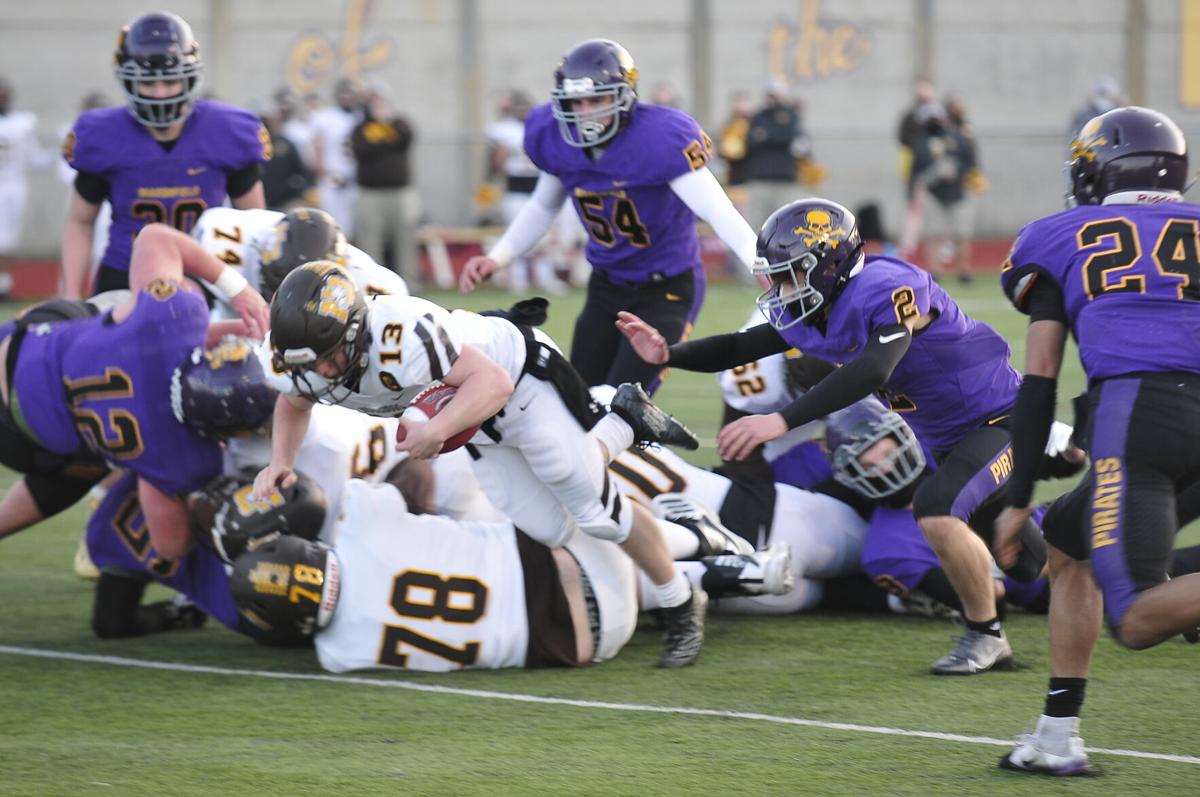 COOS BAY — Marshfield’s football team has been on the wrong side of the rivalry game with North Bend several times in recent years, including a 51-6 loss last year.

The Pirates turned the tables Friday night, dominating the Bulldogs 40-7 to stay perfect on the season leading into a huge game against Marist Catholic in Eugene to end the regular season next weekend.

“I think we’re improving each week,” Marshfield coach John Lemmons said. “We did a lot of things really well.”

Marshfield was efficient on offense and stifling on defense after giving up a quick score on North Bend’s first possession, eventually forcing five turnovers.

Meanwhile, quarterback Dom Montiel threw four touchdown passes and rushed for another score as the Pirates pulled away for the victory.

“That was a fun game,” said Marshfield’s Pierce Davidson, who was on the receiving end of two touchdown passes and two other big plays to set up scores. “I think we held our own on defense. On offense, we held our own up front.”

And Montiel made a series of big plays.

He didn’t have anything to do with Marshfield’s first score, though. After a big kickoff return to start the game, Noah Niblett took a handoff on the first offensive play and threw to DJ Daugherty behind North Bend’s defense for a 41-yard score.

North Bend responded quickly with its own combination of big plays including tough running by Sidon Green and a big third-down conversion pass to Liam Buskerud to set up a 3-yard score by quarterback Coleman Compton.

First Montiel hit Daugherty for a 17-yard touchdown. After the Pirates forced a North Bend punt, Montiel hit Davidson with a 39-yard pass to the 1 on a fourth-down play to set up his own 1-yard keeper.

After another stop and a big punt return by Sam Grayson, he hit Davidson for a 32-yard score.

That made it 27-7 and it looked like that was going to be the halftime score, but Aaron Hutchins recovered a fumble and Montiel hit Davidson with another big pass and connected with the tall receiver for his second score a few plays later.

“It was very big,” Hutchins said of the fumble. “It definitely got our spirits up even more.”

The score gave the Pirates a 33-7 lead at the break and any chance of a North Bend comeback in the second half was crushed by the turnover bug.

With Compton on the sidelines after an injury in the closing moments of the first half, the Bulldogs turned to Kaileb Pickett, who had some good passes and runs but couldn’t get North Bend back into the end zone.

Marshfield’s Ben Mahaffy ended North Bend’s first possession of the second half with an interception, Cael Church recovered a fumble on a punt return, Toby Johnston recovered another fumble and Niblett picked off another pass by Pickett.

Hutchins said the turnovers were big, “especially in a game against our rivals.”

Lemmons was pleased with how his team slowed North Bend’s attack.

“Our defense once again stepped up and played a great game,” he said. “The kids swarmed around, flew to the ball and kept the pressure on them.”

Strong defense has been a trend in the past few weeks for Marshfield.

“Our DBs are super good and we have a really good linebacker crew,” Hutchins said. “If everybody does a good job, we dominate. I think something in all of us clicks.”

Marshfield added one more score when Montiel connected with Niblett on a 27-yard touchdown after penalties erased two other apparent scores by the Pirates.

“Dom stepped up and made some amazing plays,” Lemmons said.

The turnovers were about all Marshfield did wrong, and something the Pirates would like to clean up before they face the Spartans for the Sky-Em League title and a possible spot in the Class 4A championship game.

“We’re going to have to play our best game for sure,” Lemmons said. “We need to want it more than them and don’t beat ourselves.”

North Bend, meanwhile, will need to play better if it wants to win either of its final two games, at Lebanon this week and at home against Class 6A Grants Pass to close the season.

“Us seniors want to get those two wins,” said North Bend’s Bridger Holmes. “We need to fix mistakes.”

“That’s a good football team,” Prince said. “It kind of felt like that first half, if we could have made some plays early, we could have got some momentum.”

But that didn’t happen.

“They just played better,” he said. “They were more prepared. We made mistakes.”