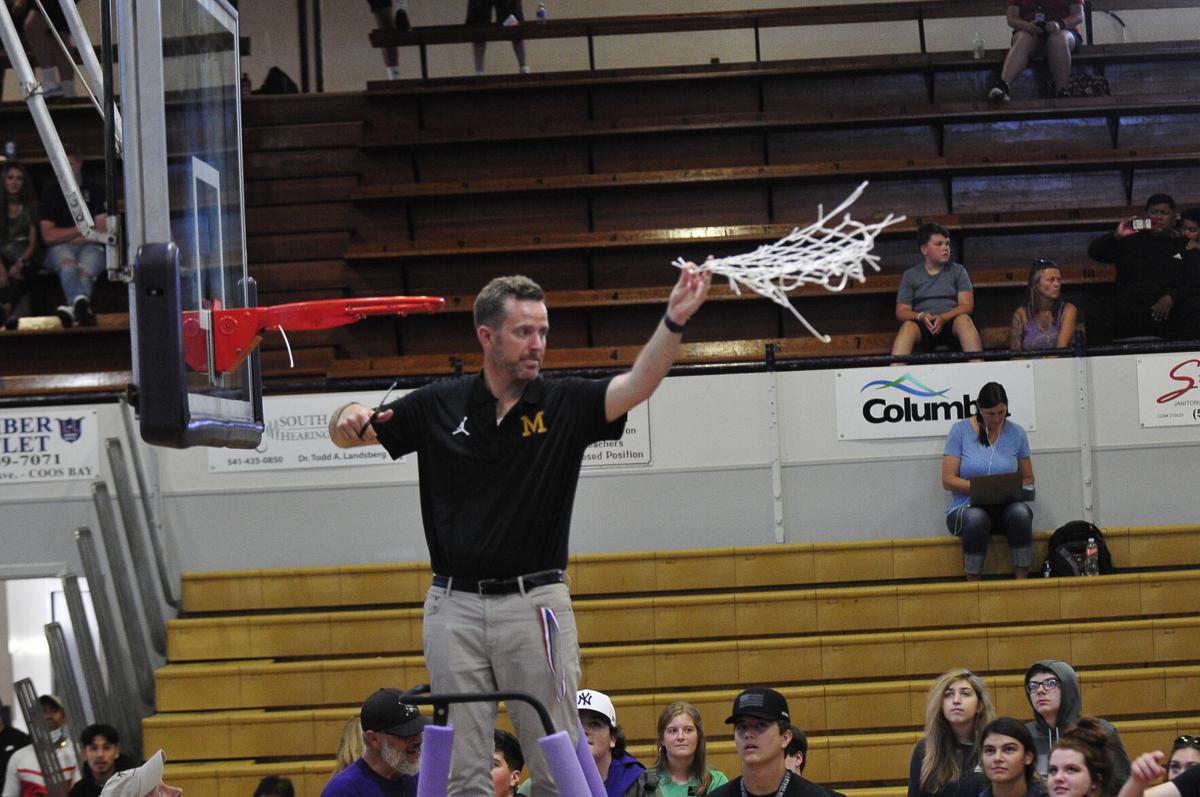 Marshfield coach Casey McCord holds up the net after he and the players and coaches cut it down in a ceremony following the Pirates' win over Cascade in the Class 4A championship game Friday. 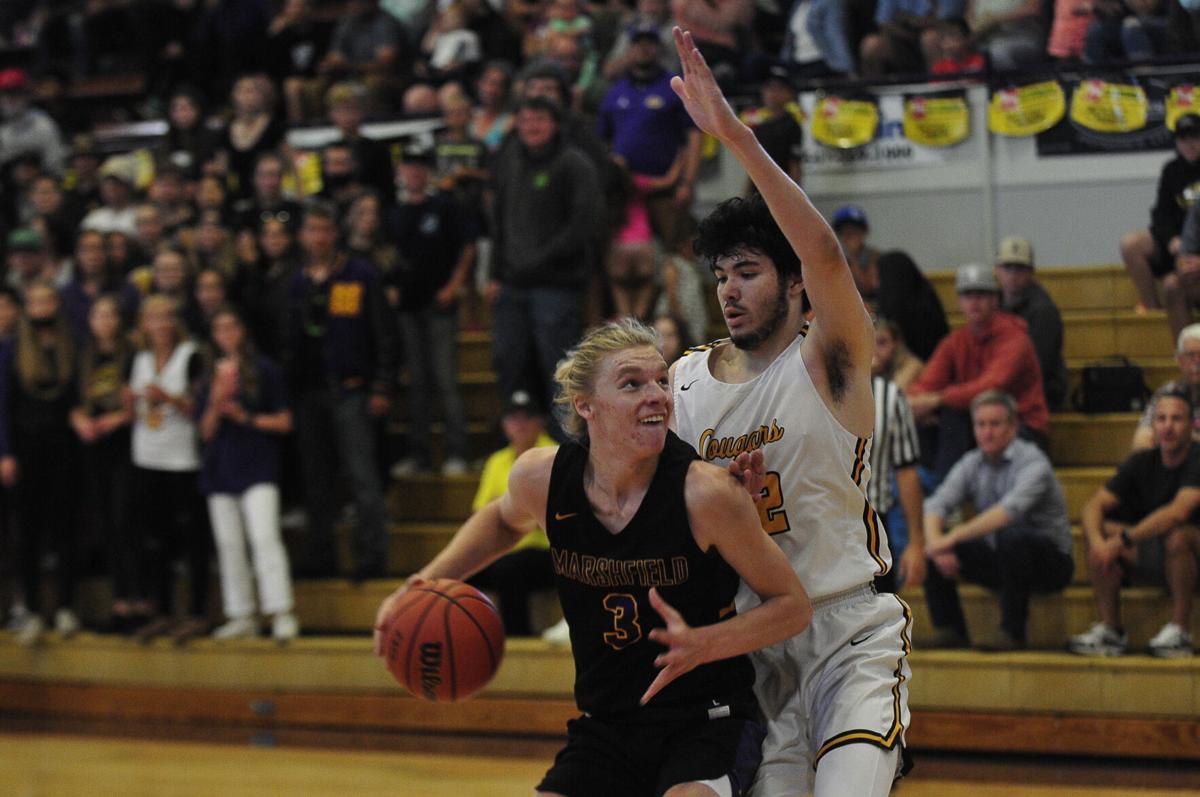 Marshfield's Pierce Davidson attacks the basket against Cascade's Dom Ball during the first half of Friday's championship game at the Pirate Palace. 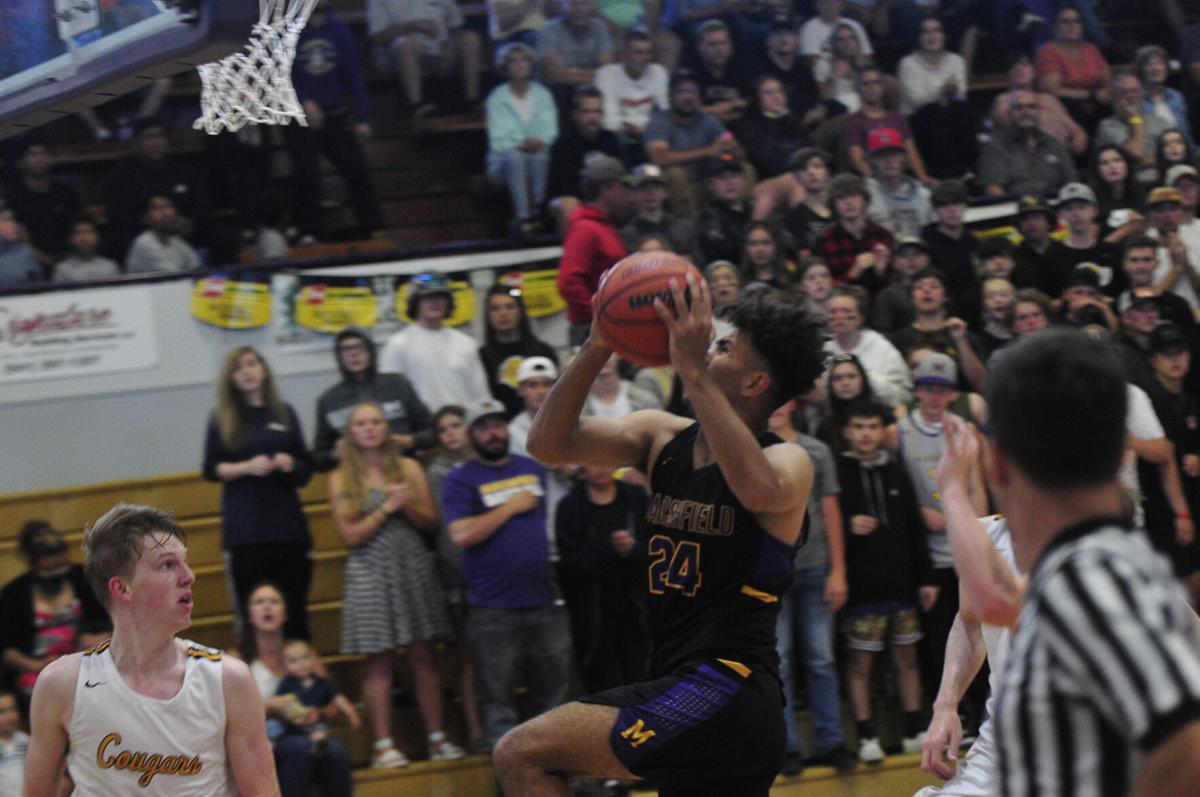 Marshfield's Dom Montiel drives to the hoop Friday. Montiel had a pair of big buckets in the fourth quarter of the Pirates' win. 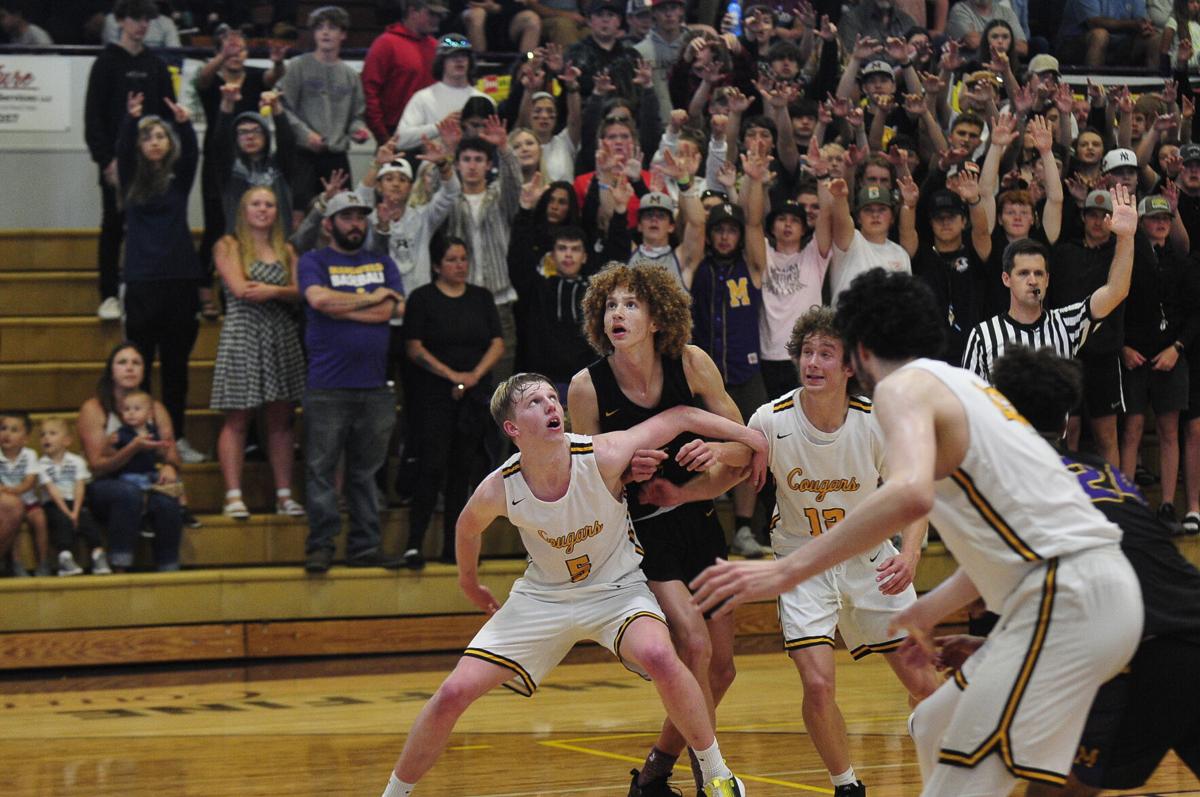 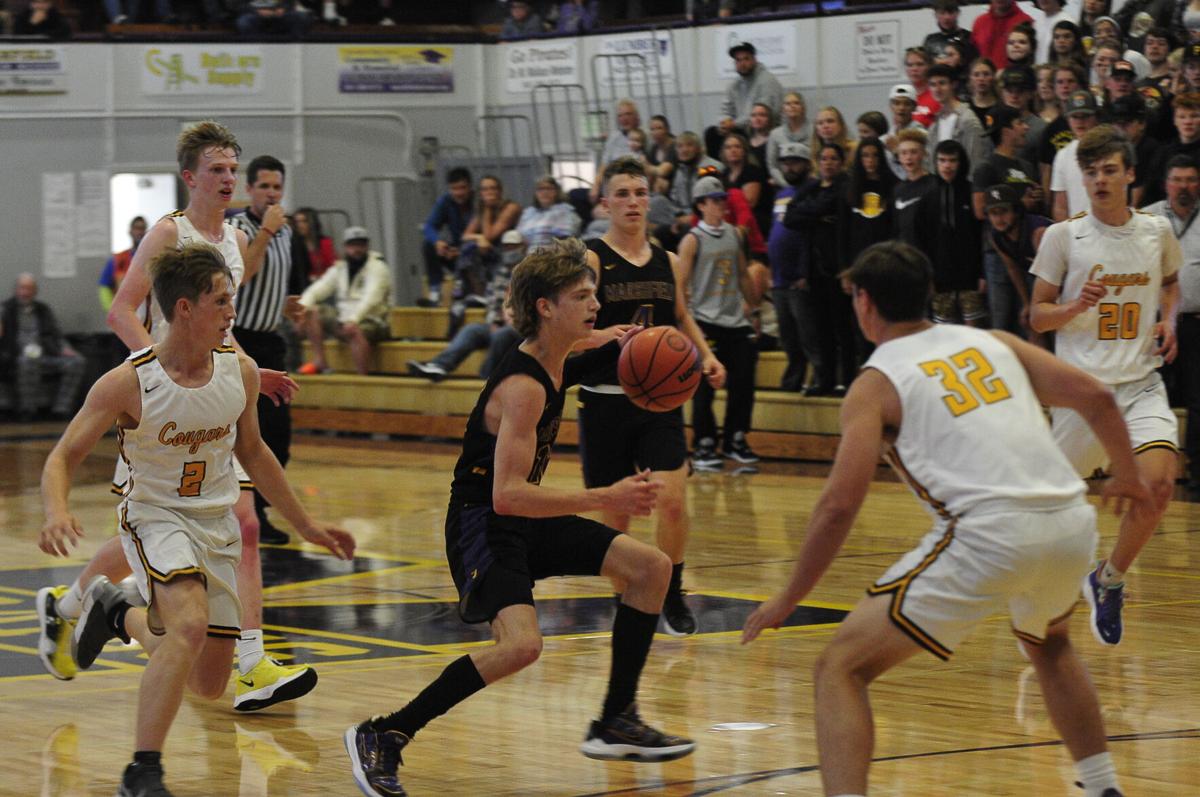 Marshfield's Mason Ainsworth had 29 points during the championship-game win over Cascade.

Marshfield coach Casey McCord holds up the net after he and the players and coaches cut it down in a ceremony following the Pirates' win over Cascade in the Class 4A championship game Friday.

Marshfield's Pierce Davidson attacks the basket against Cascade's Dom Ball during the first half of Friday's championship game at the Pirate Palace.

Marshfield's Dom Montiel drives to the hoop Friday. Montiel had a pair of big buckets in the fourth quarter of the Pirates' win.

Marshfield's Mason Ainsworth had 29 points during the championship-game win over Cascade.

COOS BAY — For the first time in more than 60 years, Marshfield is state champion in boys basketball.

The Pirates beat Cascade 60-54 in the Class 4A championship game played on their home floor Friday afternoon to take the title for the first time since 1953.

“We’ve been dreaming about this since we were kids.”

For the second straight day, the Pirates fell into an early hole and battled back. And just like in their semifinal win over Woodburn on Thursday at North Bend High School, they won with stellar defense in the fourth quarter.

Cascade entered the fourth with a 48-47 lead after a big finish to the third quarter, but managed just six points in the final eight minutes, largely because of lockdown defense by Ezra Waterman on Cascade star Carson Molan.

The sharpshooter had three 3-pointers and 11 points in the third quarter, when Cascade erased a nine-point Marshfield lead, but didn’t score in the fourth, when Waterman stifled him.

“Ezra was the bulldog we know he is,” Marshfield coach Casey McCord said. “He’s the toughest kid in the state.”

Waterman said his mission from the coaches was simple.

“They said don’t let him catch the ball,” Waterman said, adding that he embraced the role.

While Waterman was providing the defense, the Pirates were getting big baskets on offense.

Montiel went straight at Cascade’s 6-foot-10-inch Dom Ball for back to back hoops to give Marshfield the lead and Pierce Davidson had a free throw and then a hoop inside. Mason Ainsworth added a jumper in the lane and when it came down to the final moments and the Cougars had to foul, Ainsworth hit four straight free throws to finish a night when he scored 29 points and went 10-for-11 from the stripe.

Montiel added 15 points and Davidson scored 10 one day after he was held to a single basket by Woodburn.

Marshfield had to dig itself out of an early 10-0 hole against Woodburn on Thursday, and it was Montiel and senior Noah Niblett who got the team going.

They combined to score all of Marshfield’s points in the first quarter.

“A game like that, they’re going to try to take our best players out,” Niblett said. “When things got down, me and Dom stepped up and brought our whole team up.

“In this game, we were down early (again). We know how to push through that.”

Ainsworth eventually finished with 22 points against Woodburn. In the championship game, he had five points in the first quarter, 16 by halftime and 23 through three quarters.

Molan had 20 through three for Cascade before Waterman shut him down in the fourth.

Kellen Sande had 11 points in the first half for Cascade, but a hand injury he suffered in the game kept him from shooting effectively the final two quarters. And the Pirates did a good job defensively inside against Ball, with Davidson and Monty Swinson limiting his touches.

The offensive game plan was simple.

“We did what we wanted to do — attack them and get them in foul trouble,” McCord said.

“The coaches told me to just go at him and it worked,” Montiel said.

As the clock ticked down and it became clear the Pirates would win, the home crowd let out one of many huge roars that filled the Pirate Palace. More came when the players and coaches took turns cutting down the net.

McCord spoke of the team’s turnaround from early in the season, when a blowout loss to Junction City left them with a 4-3 record.

“It’s a lot of grit,” he said. “We’ve got a group of kids that have been playing together a long time.

“We’ve grown a lot in three or four weeks, but it wasn’t a three- or four-week process. It’s been 10 years.”

Within the season, the Pirates got better and better after the slow start.

“We’ve been on a roll,” Montiel said. “We just had the confidence.”

The Pirates expected a special year with a strong returning core of players, and now the Pirates can dream of a repeat title with Niblett the only senior in the regular rotation.

“Coming into the season, our goal was to go back-to-back,” Montiel said.

But before worrying about next year, when the sports seasons should return to normal with a regular-length winter basketball season instead of a short spring season, the Pirates have a little time to celebrate their first crown in 68 years.

In the third-place game, Banks held Woodburn to 15 first-half points and then held on when the Bulldogs made a run in the second half, eventually winning 44-32.

Tyler Exline had 11 points for the top-seeded Braves while Cooper Gobel and Charles White added eight each.

Cole Beyer had eight and Jonathan Marroquin seven for the Bulldogs, who, like Marshfield were an at-large selection to the Elite 8 Showcase.

The all-tournament first team included Montiel and Ainsworth from Marshfield, Molan and Ball from Cascade and Gobel of Banks.