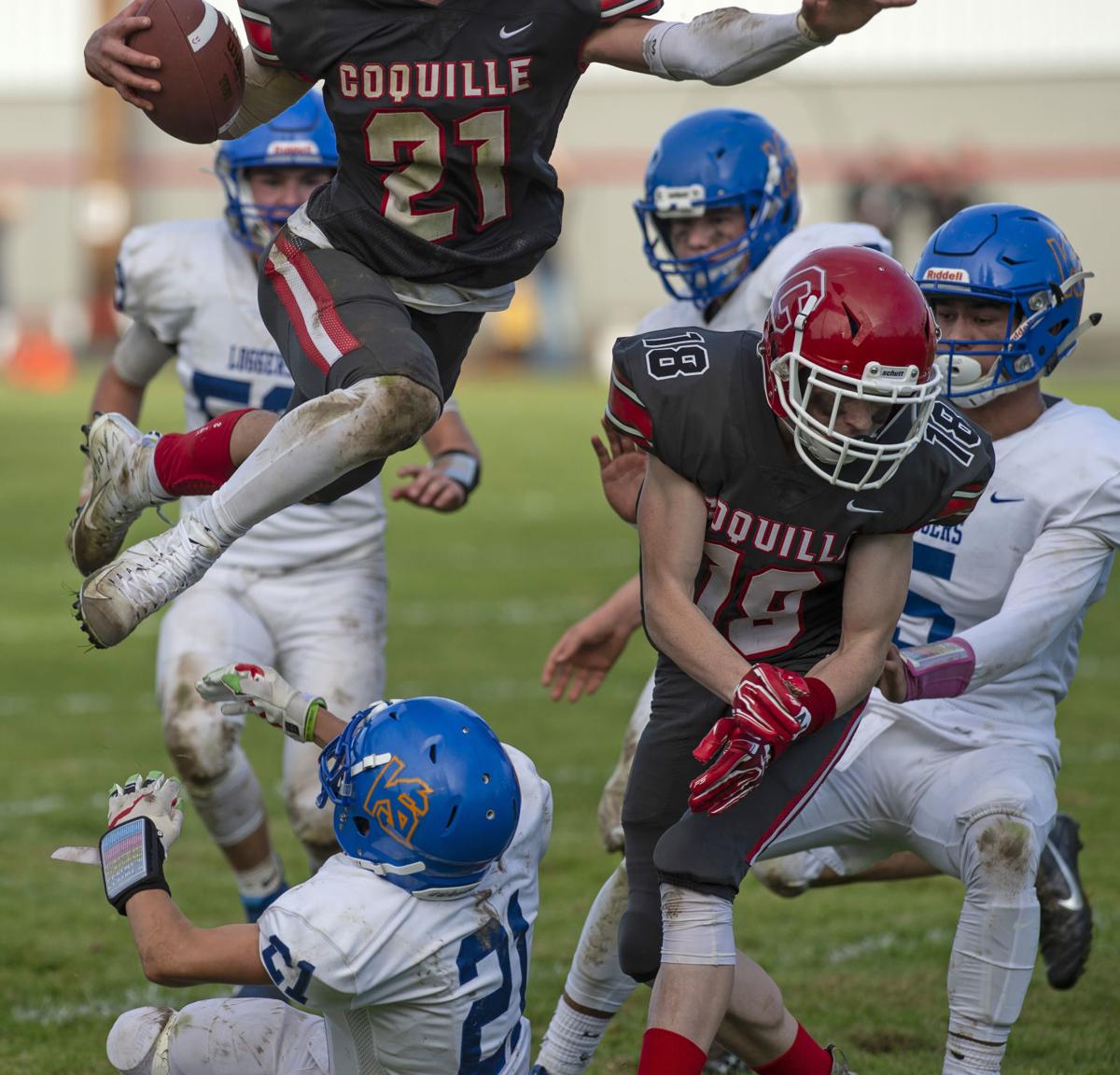 Coquille back Gunner Yates leaps into the end zone Saturday during a quarterfinal play off game against Knappa at Coquille High School. 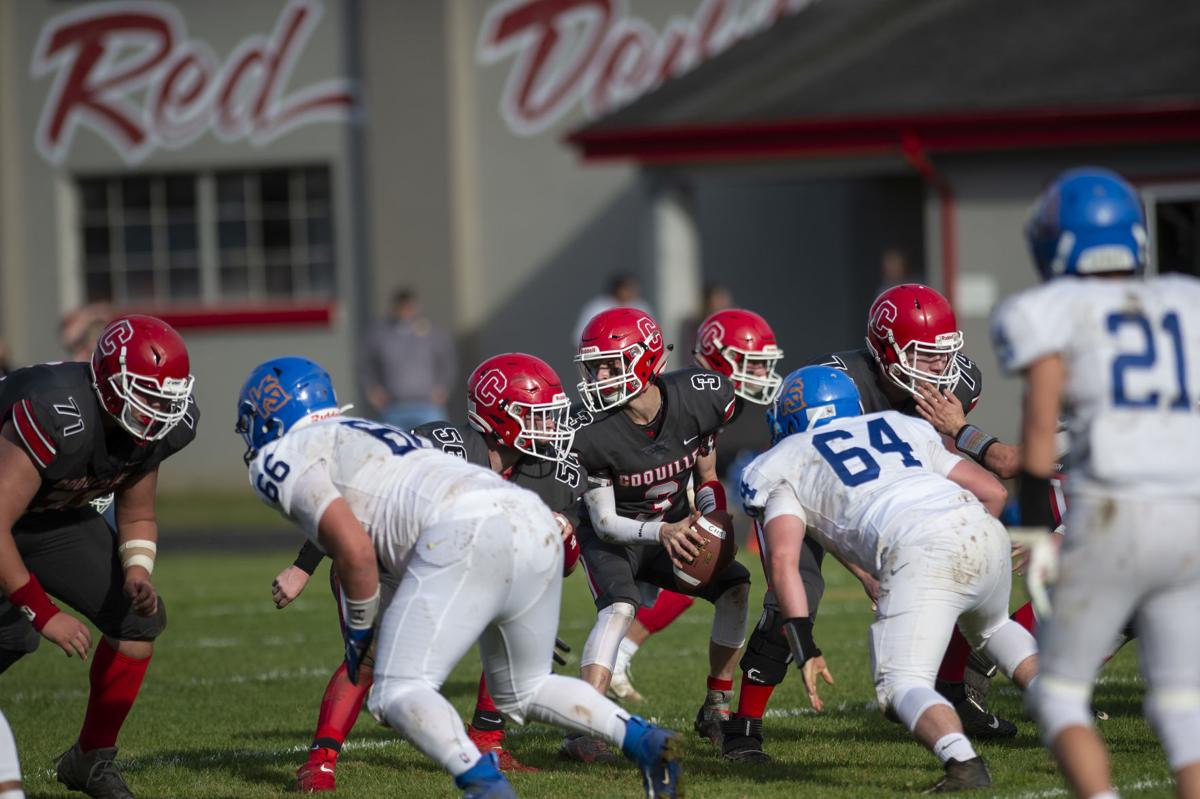 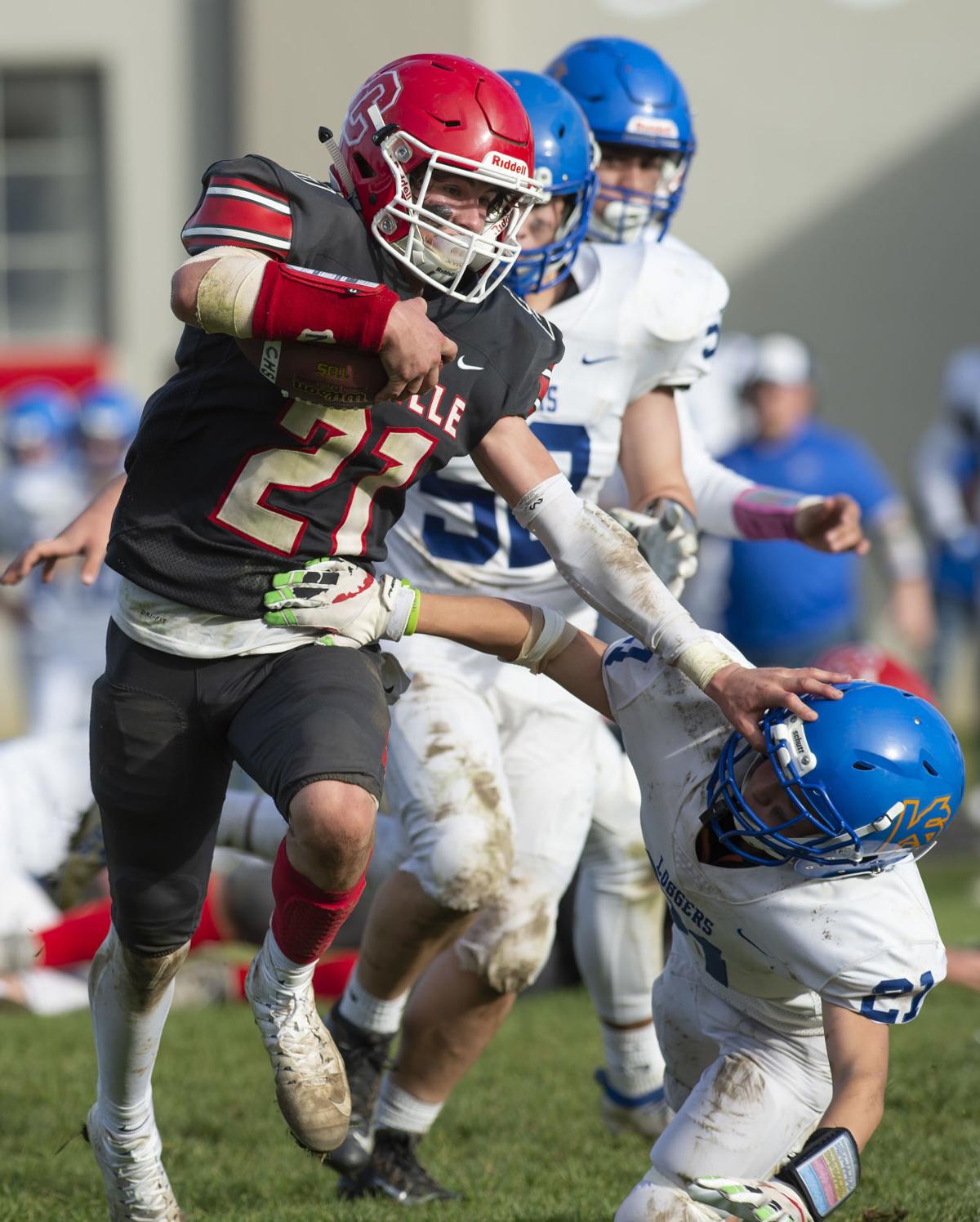 Coquille's Gunner Yates runs the ball Saturday during a quarter final play off game against Knappa at Coquille High School. 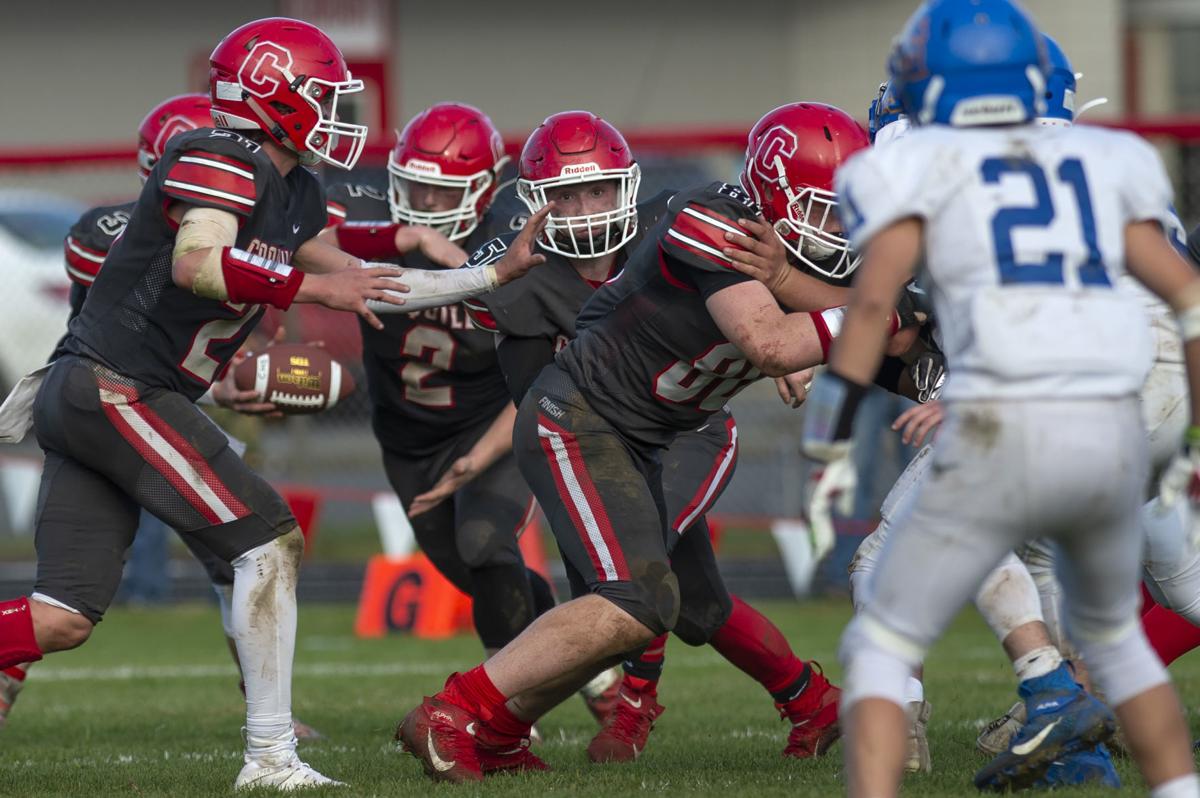 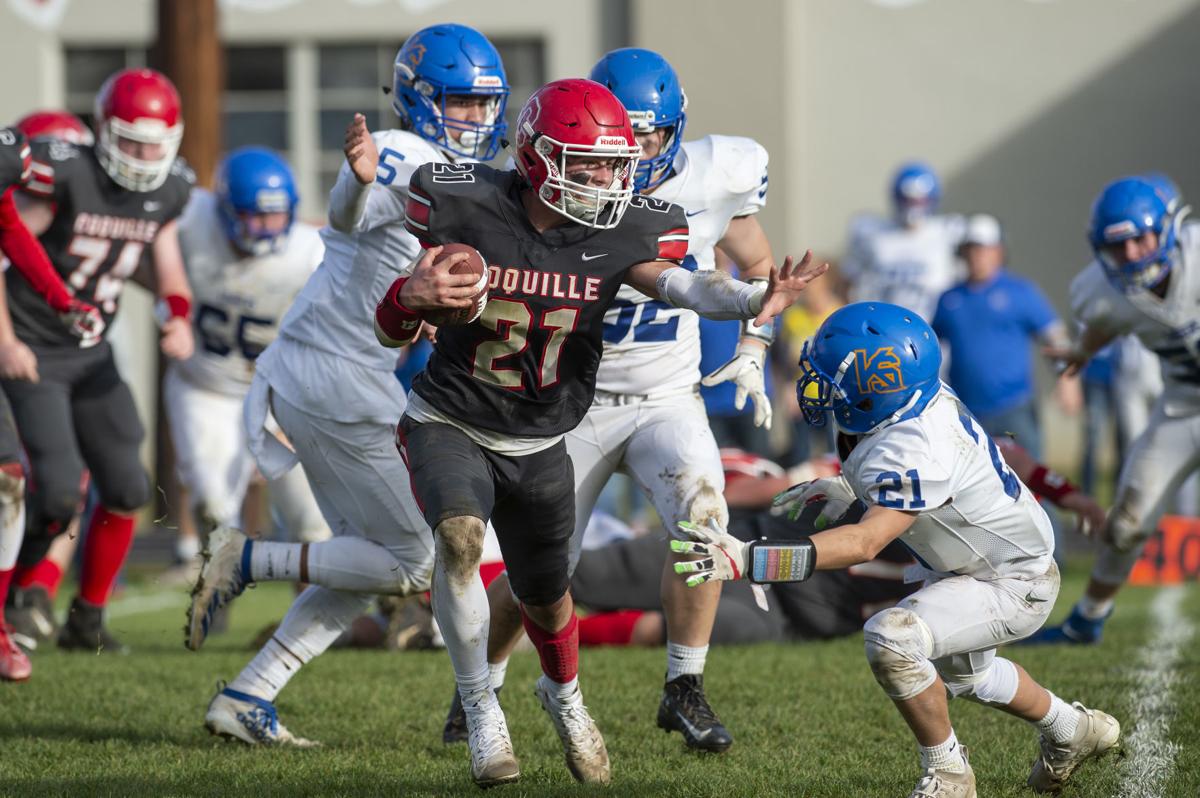 COQUILLE — Coquille’s dreams of a Class 2A football title died Saturday when Knappa held off a late comeback by the Red Devils, winning 36-30 in the quarterfinals at Spike Leslie Field.

The Loggers built a two-score lead with a touchdown after a Coquille fumble on the first play of the second half, scored again after Coquille had cut into the deficit and then held on after the Red Devils scored and got the ball down to Knappa’s 32 in the final minute.

“They made plays when they needed to,” Coquille coach David Thomason said. “They’re a good football team.”

The Red Devils, who were No. 2 in the OSAA power rankings, had hoped to reach the semifinals for the second time in four years. Instead it will be Knappa facing Heppner, a 32-7 winner over Warrenton, next weekend. Kennedy faces Monroe in the other semifinal after the Trojans beat Oakland 45-7 and Monroe avenged an earlier loss to Toledo 56-26 in the other two quarterfinals Saturday.

“This is a really bad feeling,” said Coquille’s Ean Smith after receiving hugs from a long line of supporters following the team’s final on-field meeting of the season. “At least we lost to a talented team.”

And, he pointed, out, “We fought hard to the last second.

“We went down kicking and screaming.”

Knappa set the tone early in what was expected to be a battle between Coquille’s punishing run game and the Loggers’ wide open attack by running the ball every play on the opening drive, capping a march that took more than five minutes on quarterback Eli Takalo’s 1-yard keeper.

Takalo said Knappa’s game plan was to run until Coquille stopped the Loggers and heaped praise on his offensive line.

“Those are the guys I rely on — our whole team relies on them,” he said.

Coquille's Gunner Yates runs the ball Saturday during a quarter final play off game against Knappa at Coquille High School.

By the end of the game, Takalo had rushed for 114 yards on 27 carries to lead Knappa.

Takalo’s first pass was the two-point conversion, which was knocked down by Coquille’s Jace Haagen.

But Knappa responded when Takalo faked a quarterback sweep around the right end on a fourth-down play and instead found a wide-open Devin Hoover, who did the rest of the work himself finding the end zone on a 41-yard score.

Coquille drove the field again, with Smith scoring his second TD on the second play of the second quarter to give the Red Devils a 16-12 lead. They then got a stop and appeared to have momentum, but were undone by two straight false start penalties after reaching Knappa’s 12.

And Knappa went back in front when Takalo hit Kanai Phillip on a wide receiver screen and he raced down the sideline 55 yards for a score.

Takalo only completed six passes in the game, but still threw for 163 yards.

“The receivers are big playmakers,” he said.

Phillip’s score gave the Loggers a 20-16 halftime lead, and Knappa got a big break on the first play from scrimmage in the third quarter, when the Red Devils fumbled and Cameron Miethe recovered.

Coquille needed just two plays to score, both runs by Gunner Yates, but Knappa quickly scored again on a 1-yard run by Phillip set up by a 40-yard pass to Trevor Ogier.

Takalo said the motivation was simple for the Loggers.

“We just said, ‘The pressure is on them, let’s rise to the occasion,’” he said.

The clock turned into the ultimate enemy for Coquille, which doesn’t pass much.

The Red Devils got big days from both Smith, who rushed for 203 yards in his final game, and the speedy sophomore Yates, who had 140 rushing yards. But they couldn’t come up with the big plays on the final drive against Knappa's resilient defense.

“Our line worked its tail off today,” Takalo said.

Thomason said Coquille could point to lots of little things that made the difference Saturday, but turned his attention to the team’s season.

“There are so many positives for this season,” he said. “I don’t know where to begin.

“We were back-to-back league champs, only losing two games. We had so many good seniors and the young guys stepped up. The positives go on and on.”

“We have nothing to hang our heads about,” he said.

Zach Kissinger, the all-league lineman who played in the semifinals as a freshman four years ago and was part of three league championship teams, was among the Coquille players hit hard by the loss. But he said he will remember this season, and his years on the team, fondly.

A total of 20 boys and girls teams from Bandon, Coquille, Coos Bay, North Bend and Reedsport competed on Veteran’s Day in the Basketball by the Bay three-on-three tournament at the Boys & Girls Club of Southwestern Oregon.