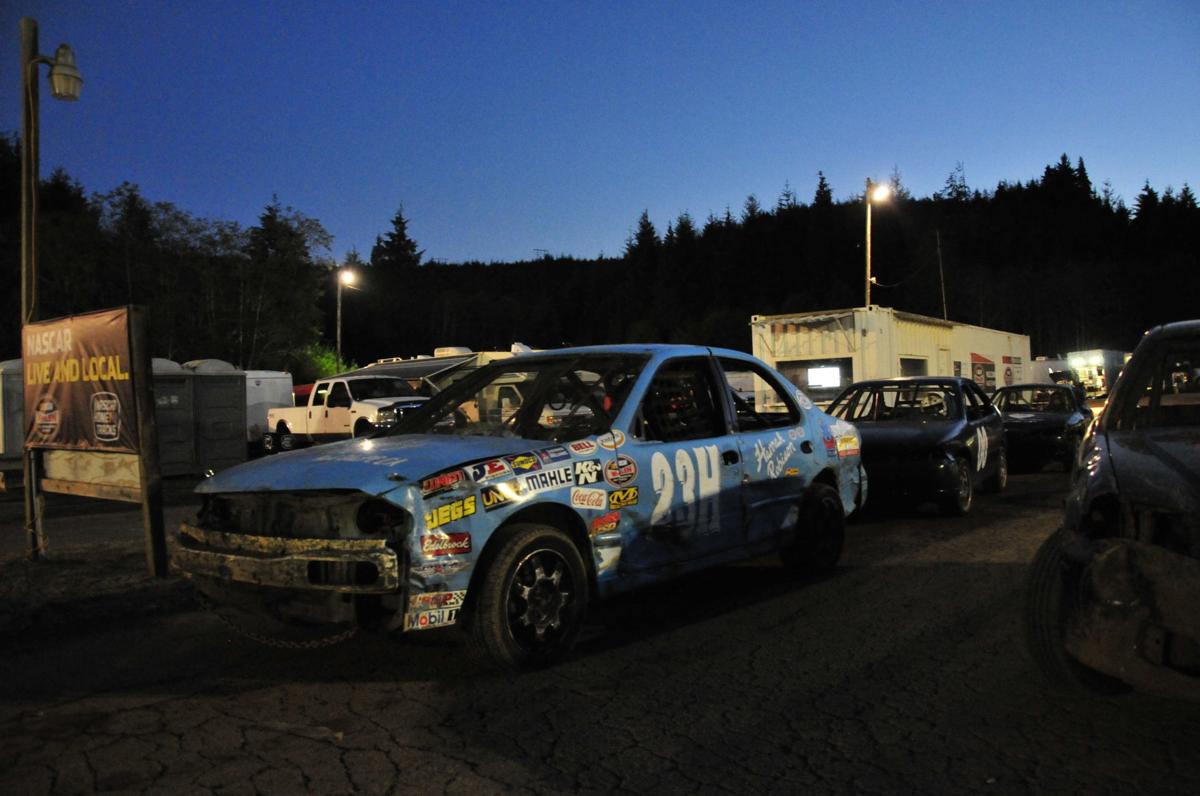 Hannah Robison waits in her car for the start of a race at Coos Bay Speedway on Monday evening. 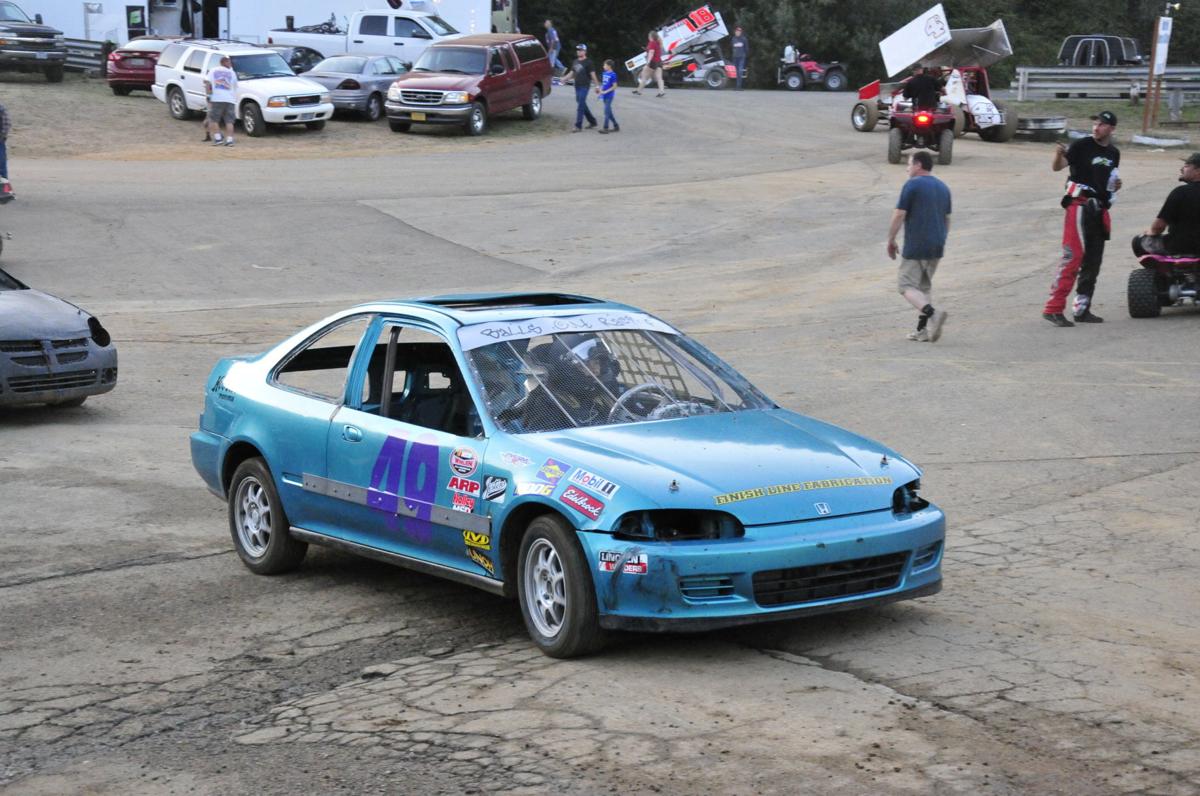 Gabrielle Boles sits in her car at Coos Bay Speedway on Monday. The Bandon driver finished second in the Hornets division main event.

As she walks through pit road at Coos Bay Speedway on Monday night after her race in the Hornets classification, she quite casually carries yet another first place trophy.

“I can’t fit them on my shelf anymore,” said Robison after her latest win. “I didn’t think I would have this problem.”

The Hornets were the only local division racing on a special Monday night event at the speedway that included the touring ISCS Week of Speed for winged sprint cars and also dwarf cars making an appearance at the track.

Robison, 18, is in her fourth year of racing and has been the star of the Hornets division at the Speedway this summer and with just over a month to go sits in first place in points. On Monday night the recent North Bend High School graduate from Myrtle Point put together a come-from-behind victory in the final lap to pick up her sixth victory in 10 races.

“Oh my gosh, funnest race I’ve raced in a long time,” said a delighted Robison. “It was one of those races that either way if I would have got first, second, whatever, racing like that, it doesn’t matter where you finish, it’s still fun. You’re still happy after.”

The action heated up in the Hornets division as Tyler Tullos of Bandon took control of the 20-lap race one lap in. Taking the lead from Gabrielle Boles who started in pole position, Tullos put a half lap on the rest of the eight-car field before a restart after a crash on lap nine sent him to the back.

Gabrielle Boles sits in her car at Coos Bay Speedway on Monday. The Bandon driver finished second in the Hornets division main event.

Boles, who moved to Bandon from Alaska last year, took the lead with Robison in second after starting in sixth. After Tullos’s back right tire fell off during the 13th lap, the race became a showdown between Boles and Robison as they led the suddenly thinned out field of four.

“Hannah has always been the number one person that is my favorite person to race because she challenges me all the time,” said Boles who recorded her fourth second-place finish of the season. “Her and (Tullos) because they’re experienced and I love it.”

The tactical showdown heated up at lap 15 as Boles found a high line on the track which gave room to Robison on the inside. But Robison, for the time-being, could not complete the pass.

“My mindset was kind of, ‘oh, crap’ because my car runs on the high line, it comes around the high line amazing. And so when it’s like that I have to try and work my way… around her line,” said Robison.

After trying to pass to no avail, Robison’s final push found a sliver of space that allowed her enough room to successfully make her pass on the inside in the nick of time.

“It was the final lap, I finally got around her coming into the last corner,” said Robison. “Don’t give up, just keep pushing, keep pushing is basically going through my mind at that point. Push harder, do something different if that’s not working. It’ll come around, it either won’t or it will. And it did.”

Robison fell in love with racing when she was in the pits with her dad when she was 14. She knew she had to be racing and has been ever since. In her first year she finished eighth overall and has claimed third place for the last two seasons. Now sitting in first place in the standings, she is just enjoying the ride.

“Sometimes it’s got to the point where I laugh; I laugh when I’m in my car. I tell people that and they do the exact same thing, they laugh at me,” said Robison. “I couldn’t help but laugh because it’s so fun. But at the same time, I’m like, ‘I have to pass her.’ My competitiveness is coming out.”

For Boles, 35, this season has been about gaining confidence. After coming to the area halfway through last season and racing for the first time, she was constantly nervous. Still nervous, now she is just looking to improve with each turn in hopes of finding that elusive first win of the season.

“I want to do better. I’m that type of person that I want to be perfect at anything I do so now it’s like, OK, I’ve had this many races, now I want to be great,” she said.

While still disappointed in the loss, ultimately, she was happy to be racing with Robison by her side.

“I love it when it is two females, too, you know what I mean? I hope there are other females that see this, like younger girls, and be like, that’s what I want to do,” said Boles. “And be role models. That’s a really big woohoo for me.”

The Hornets will be back in action on Saturday, Aug. 17, at Ken Ware Chevrolet Night at the Coos Bay Speedway. There will also be races in the Super Late Models, Sportsman Models, Street Stocks, Mini Outlaws and Stingers. The races begin at 6:30 p.m. Admission is $10 for adults and $8 for seniors and children.

The Southwestern Oregon Football Officials Association is meeting weekly as the officials prepare for the upcoming season.