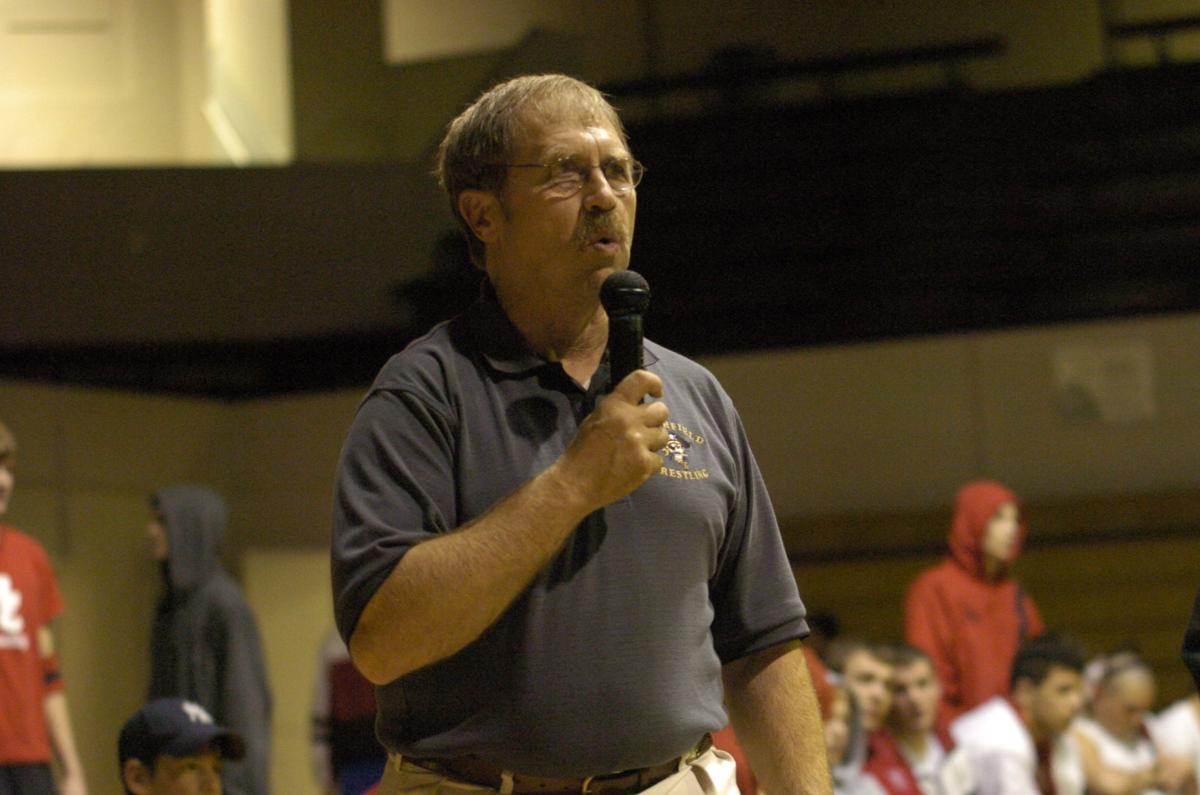 Wayne Van Burger speaks to the crowd before his final dual as Marshfield head wrestling coach in 2005. 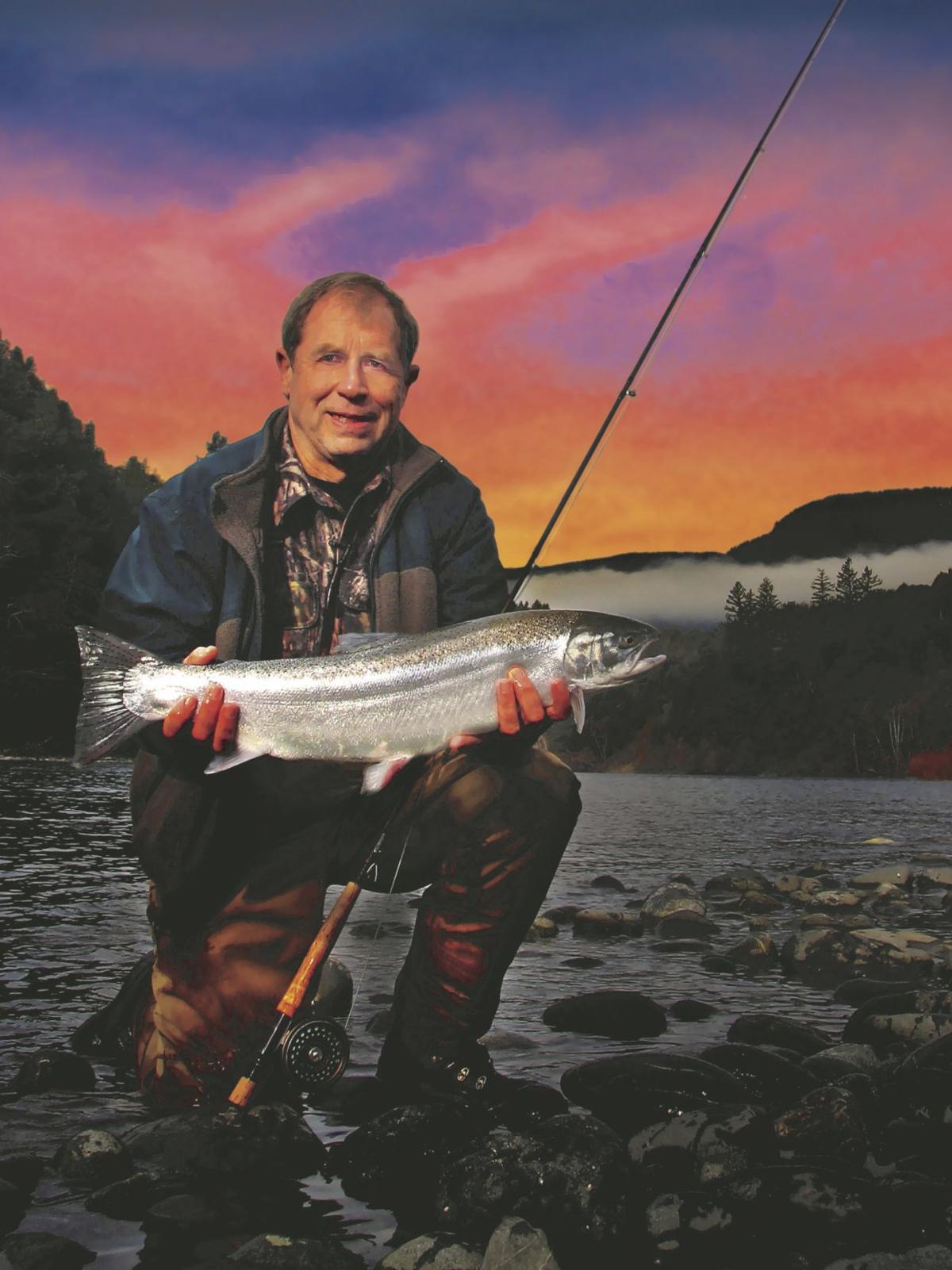 Wayne Van Burger poses with a fish he caught. The outdoors was one of his big passions, especially after he retired from coaching.

Wayne Van Burger speaks to the crowd before his final dual as Marshfield head wrestling coach in 2005.

Wayne Van Burger poses with a fish he caught. The outdoors was one of his big passions, especially after he retired from coaching.

COQUILLE — Wayne Van Burger was always on the go.

Whether it was being an all-state football player for Coquille High School, a renowned wrestling coach for decades at Marshfield High School or an award-winning documentary filmmaker, he put everything into all his activities.

“Our word for it was he had a passion,” said Susanne Van Burger, Wayne’s wife. “He went after everything with that passion.”

The wrestling community was shocked this week to learn of Van Burger’s death. The 71-year-old former teacher, coach and outdoorsman suffered an apparent fatal heart attack while on a run.

“That was kind of devastating (news),” said Bo Hampton, Marshfield’s new wrestling coach, who credited Van Burger with his desire to get into the profession.

After graduating from Coquille in 1967, Van Burger attended Southwestern Oregon Community College for a year before finishing his college education at Oregon College of Education (now Western Oregon University), where he played football for three years and wrestled for one.

He taught at Seaside High School for three years, but will always be remembered for his time after returning to the South Coast.

Van Burger taught a variety of subjects at Marshfield over a 31-year stretch from 1974 to 2005.

He helped coach the freshman football team for his entire tenure at Marshfield and was head wrestling coach for 21 years after nine years as assistant, a stretch that watched the Pirates win nine league titles (and 10 dual meet crowns).

Hampton said the Pirates’ success was a reflection of Van Burger’s effort as coach.

“He put so much into it that it made us want to put that much into it,” he said. “We wanted to work as hard as we could because we respected him so much.”

Van Burger did a great job selling the sport of wrestling to the student athletes at a time when it wasn’t as popular an option as football, basketball or some other sports, said Gary Roberts, another former wrestler for Van Burger who went on to become a successful football coach.

“He taught us to take pride in what we did,” Roberts said. “We were just as valued as any other sport.”

Coaching freshman football also fed into the success of the wrestling program.

“It didn’t matter how good you were in football, he would want you to come out for wrestling,” Hampton said. “And even if you were horrible freshman year, he would work with you and by the time you were a senior, you would crack the varsity lineup.”

That was a time when Marshfield almost always fielded a full lineup and it wasn’t uncommon for wrestlers to not be able to compete at the district tournament because there were more than two Pirates at most weight classes.

Ty Van Burger, Wayne’s son, said his dad took pride in all his wrestlers and was greatly saddened if any of them who stuck with the program didn’t get a chance to compete at the state tournament at least once during their careers.

What stands out to Roberts, though, was how Van Burger kept in touch with so many of those wrestlers after high school.

For Roberts, who is now principal at Millicoma School, that included the high time of winning a state championship as Cottage Grove’s head football coach and also the low of losing the championship game.

“Those things stand out to me,” he said. “I felt pretty fortunate to have someone like that.”

Hampton, too, had a high to share with Van Burger when he led Reedsport to the state title this year.

Hampton said he was grateful to get a chance to wrestle for Van Burger when he was a Marshfield student.

“Growing up with him coaching us and teaching us — a lot more than on the mat, how to be a good person in life.

“He always taught us about being proud to be a Pirate. I’ve always wanted to get back to Marshfield and do what he did.”

Hampton said Reedsport’s success came from him implementing the philosophy he got from Van Burger.

“Wayne was absolutely thrilled that Bo is the new coach at Marshfield,” Susanne said.

“A lot of his energy went into the next generation of coaches,” he said. “He was really passionate in growing not only our community’s wrestling program, but getting (other) guys really moving forward on their programs and mentoring them on how to build success.

Ty said he has been filled with stories with similar themes as he called former Marshfield wrestlers to let them know about his dad’s death. And many more have added tributes on Facebook.

“It’s a great snapshot of past wrestlers and what he meant to them,” Susanne said.

When he was chosen for that honor, he shared the praise.

“I’m pretty excited,” Van Burger said at the time. “To be recognized by your peers is a wonderful thing.”

He added, “It's the culmination of a lot of years and a lot of help from a lot of folks. You don’t get something like that on your own.”

Coaching was a phase of Van Burger’s life, but he went on to have success as a film maker with friend Travis Cooper in Beaver Hill Productions, which they founded a year after he retired from coaching.

“He wanted to do something like that because way back we would watch fishing shows and Wayne would say, ‘I can do that and I can do it better,’” Susanne recalled. “Several Emmys later, I said, ‘Yeah, he can do it better.’”

Beaver Hill Productions won multiple Emmys for the program ‘The Joy of Fishing’ from the Northwest Chapter of the National Academy of Television Arts & Sciences.

The production team traveled to several different countries filming documentaries for the show, but also did projects in Oregon, including a 50-year anniversary video for SWOCC, as well as videos for Travel Oregon and Coos County.

And when film-making ended, Van Burger took a greater interest in photography.

“He was really getting into that,” Ty said. “The day he died, he was taking photo classes on-line, trying to learn new things about his camera.”

That was the nature of the life Van Burger lived.

“He was so full of life,” Ty said. “He was always on to something new.”

The family will plan a public celebration of life for Van Burger whenever large gatherings are allowed again — Marshfield has offered its facilities for that service.

Meanwhile, Ty Van Burger treasures the memories of his father and the stories he receives from the many friends and former athletes he has talked to this week.

“He really helped me grow,” said Ty, who was a standout wrestler himself for the Pirates, graduating in 2003.

“Everything we did together, we were always dissecting something, whether it was game film from football, or wrestling, or fishing. It really made me a critical thinker. I think that’s one of my strongest abilities now.”

But Ty also loved his dad’s impact on others.

“What was special to me was his ability to understand people — the relationships he built,” Ty said.

“He was always pushing people to be the best version of themselves they could be.”