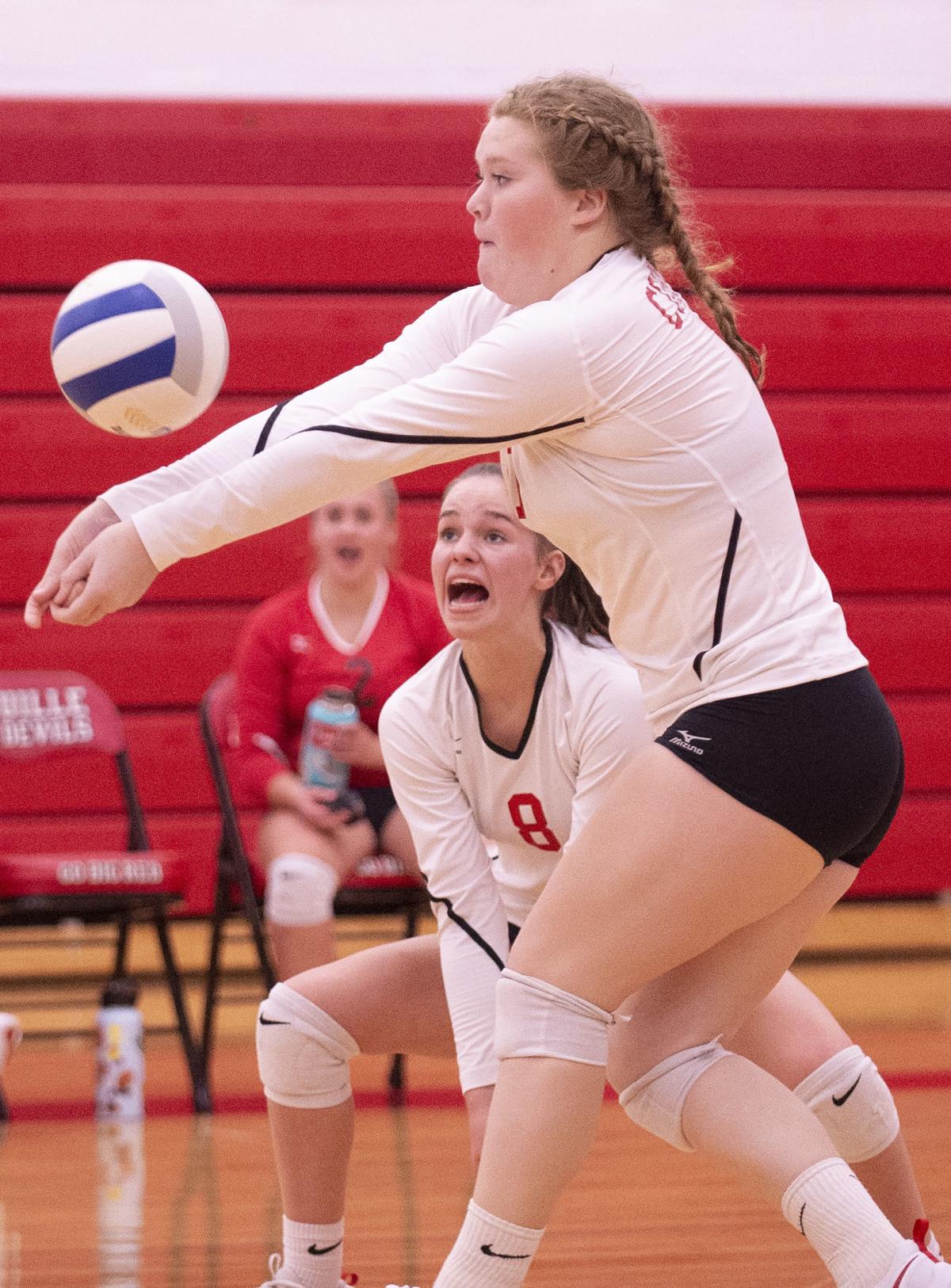 Coquille's Hailey Combie bumps the ball Thursday alongside teammate Drew Wilson during a set against Toledo at Coquille High School. 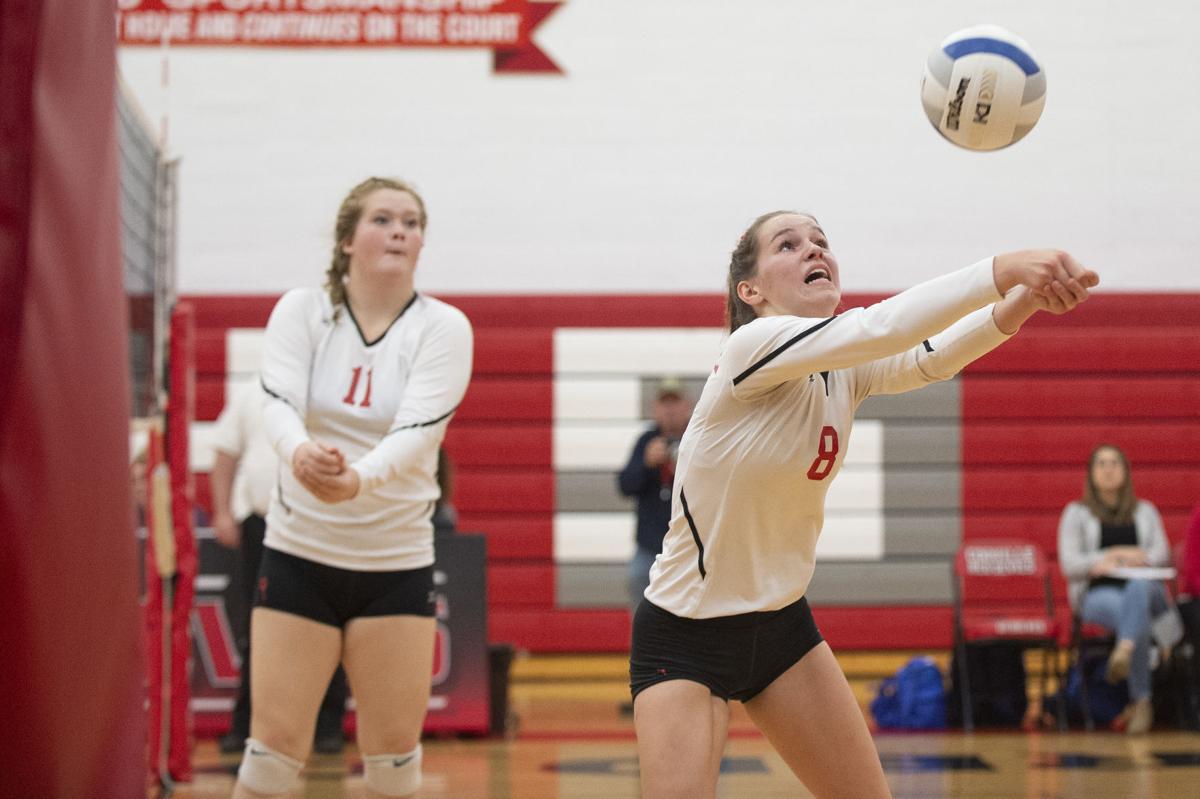 Coquille's Drew Wilson bumps the ball Thursday during a volley against Toledo at Coquille High School. 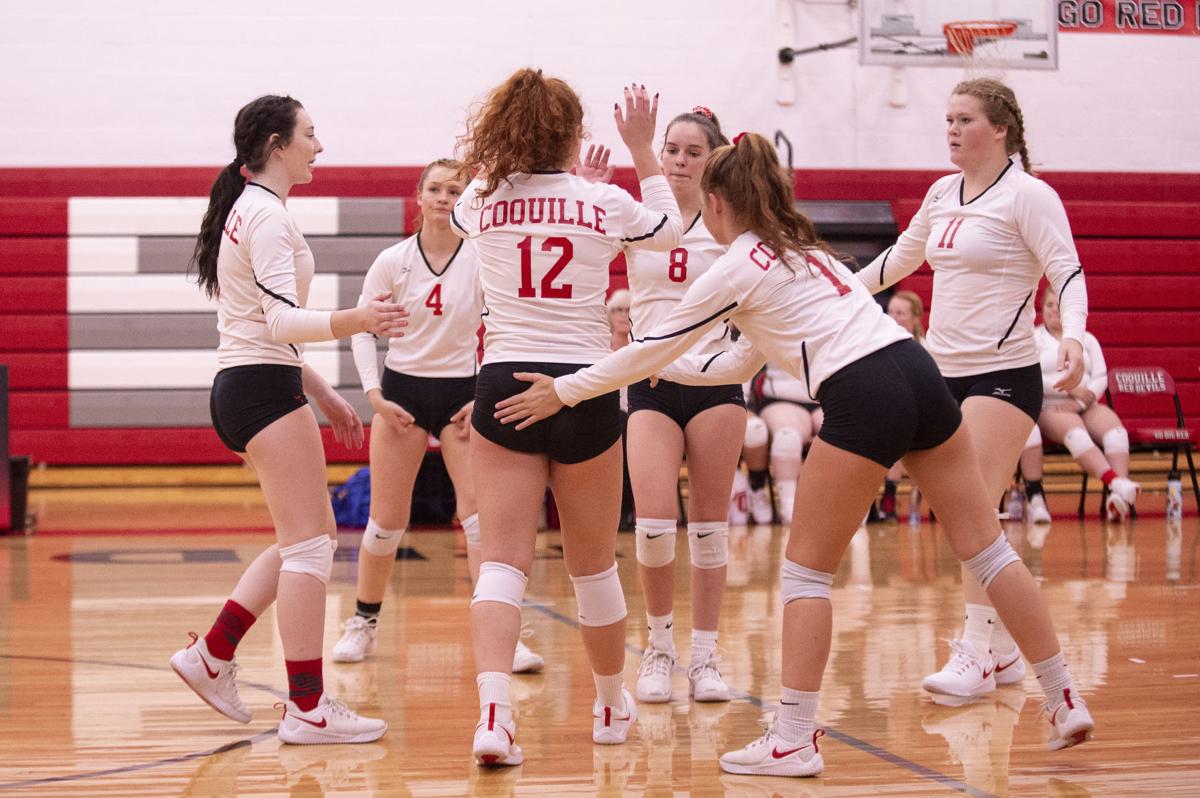 Coquille's celebrates a point Thursday during a set against Toledo at Coquille High School.

COQUILLE — After Coquille graduated seven seniors from the squad that place fourth at last year’s state volleyball tournament, the team had a lot of holes to fill.

After a slow start to the season, though, the Red Devils are in the driver’s seat for another playoff spot, finishing the first half of the Sunset Conference season unbeaten after a 25-21, 25-21, 25-20 win over visiting Toledo on Thursday.

Coquille's Drew Wilson bumps the ball Thursday during a volley against Toledo at Coquille High School.

Coquille leads Reedsport by one game in the standings and can take a commanding lead in the playoff race by beating the Brave at home on Monday.

“I’m very happy,” said Coquille libero Mariah Jarrett, one of three seniors on this year’s club. “I wasn’t sure how the season was going to go. We have improved so much as a team.

“I think we can make it to state as a goal, but win league first. We’re off to a good start.”

Toledo, which has a number of outstanding senior athletes of its own, battled the Red Devils close through most of the first and second sets, but fell to 3-3 in league play, with all their losses coming on the road to Bandon, Reedsport and the Red Devils.

Coquille’s players said they got off to a slow start against the Boomers.

“I think we finally got our heads in the game toward the second set,” said Saige Gallino, who along with her twin, Spencer, join Jarrett as the team’s seniors.

Once Coquille got going, though, the Red Devils were able to beat the Boomers with a combination of tough defense and offense from Saige Gallino, Ellie Ekelund and Hailey Combie.

Coquille's celebrates a point Thursday during a set against Toledo at Coquille High School.

The Red Devils are No. 9 in the Class 2A power rankings, though they have a chance to get a boost Saturday, when they compete in the Creswell tournament, which will have a number of top Class 3A and Class 2A teams.

The tournament is not as important as Monday’s match with Reedsport, though.

“We don’t want to overlook anybody for sure,” Saige Gallino said, adding that the team has improved because of its hard work.

“We are going to keep practicing hard and playing hard,” Gallino said.

Marshfield’s volleyball team wrapped up the first round of play in the Sky-Em League with a sweep of host Elmira on Thursday, beating the Falc…