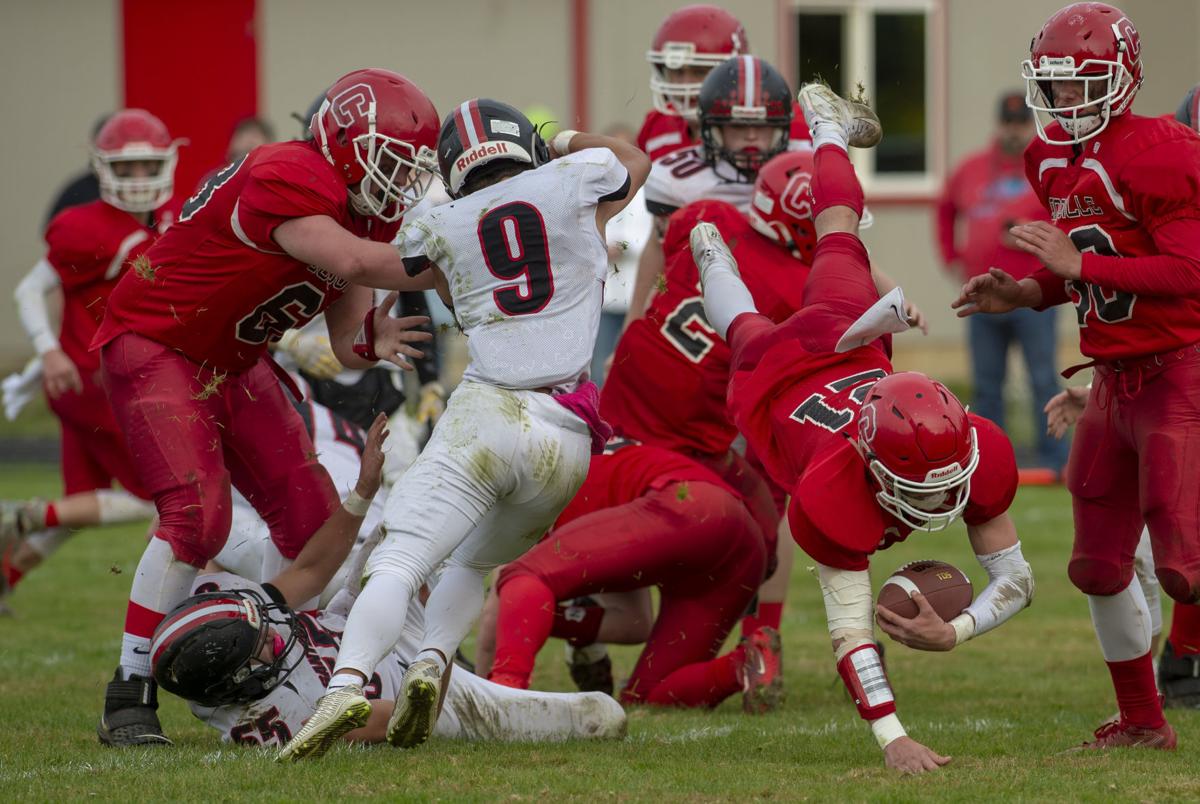 Coquille's Gunner Yates gets airborne to cross the goal line Saturday against Santiam at Coquille High School. The Red Devils beat the Wolverines 44-6 to advance to the Class 2A quarterfinals against Knappa. 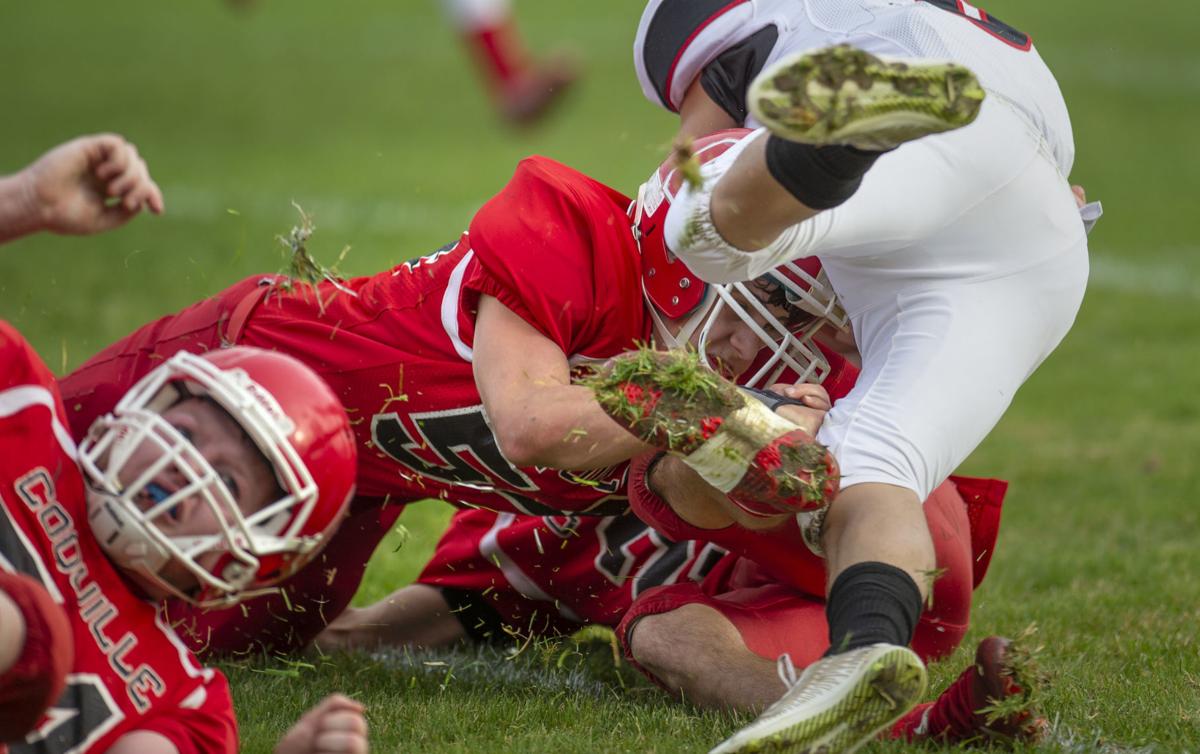 Coquille defenders bring down Santiam's Quentin Clark Saturday at Coquille High School. The Red Devils beat the Wolverines 44-6 to advance to the Class 2A quarterfinals against Knappa. 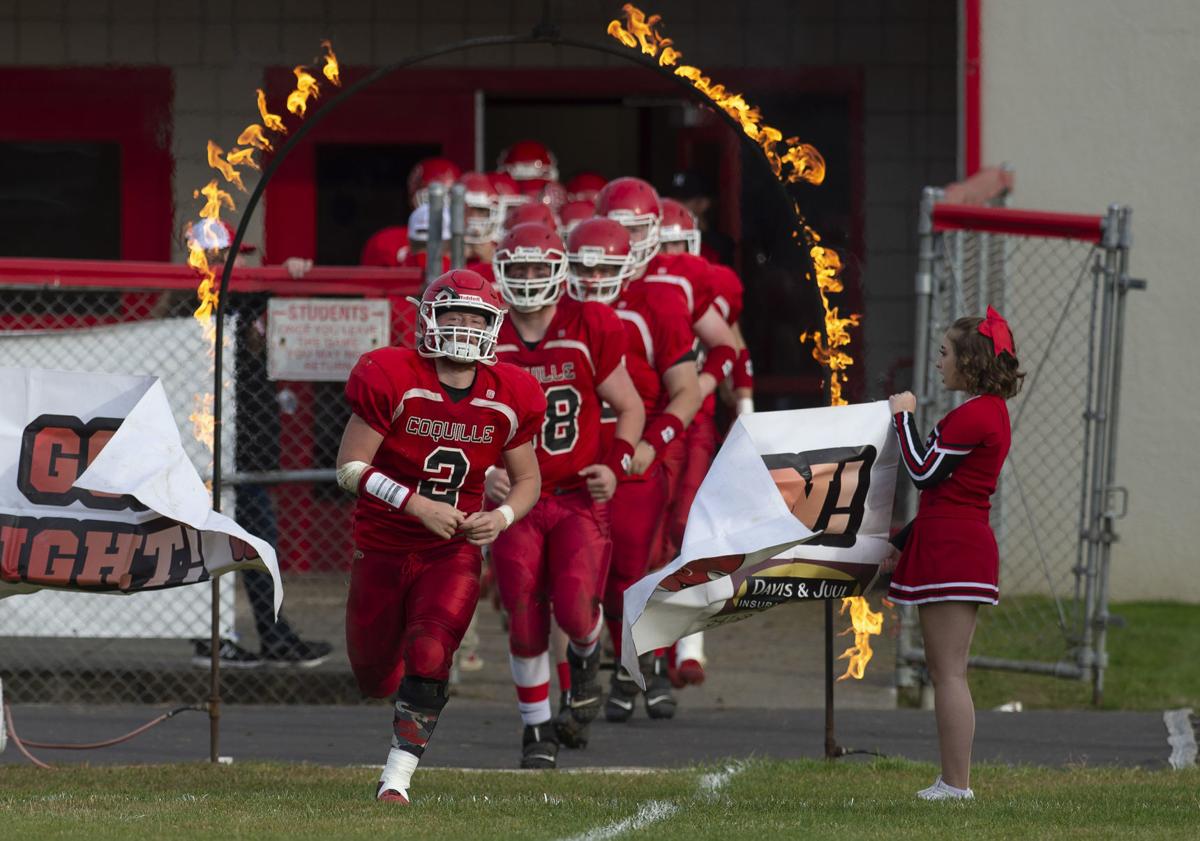 Coquille takes the field after halftime Saturday during a playoff game against Santiam at Coquille High School. The Red Devils beat the Wolverines 44-6 to advance to the Class 2A quarterfinals against Knappa.

COQUILLE — Coquille’s playoff game against Santiam on Saturday had an ominous start.

But there were no shades of last year’s playoff disappointment against Lost River. Coquille quickly righted the ship and went on to beat the Wolverines 44-6 to advance to the Class 2A quarterfinals and a matchup with Knappa — the Red Devils and Loggers will meet at 1 p.m. this coming Saturday.

“It was a great game,” Coquille lineman Caleb Prince said. “I’m proud of the team.”

The lost fumble was about the last thing Coquille did wrong on offense all game, with Gunner Yates and Ean Smith running almost at will through Santiam’s defense behind the Red Devil’s big line and Yates also catching three passes for significant gains from quarterback Jace Haagen, one a one-handed grab.

And aside from one touchdown drive, the defense largely stifled the Wolverines.

“This is probably one of the best games we’ve played,” Haagen said, adding that the strong week was set up by a good week of preparation.

“We came out every practice focused and ready to get it done,” Haagen said.

Coquille got things going on its second offensive possession, basically alternating runs by Smith and Yates until Yates sped around the left end after taking a pitch from Haagen and sprinted 33 yards untouched to the end zone.

Garrett Gardner picked off a wobbly pass by Santiam’s Ezra Downey three plays later and Coquille quickly scored again, on an 8-yard run by Smith in the final minute of the first quarter.

Santiam followed with its best drive, a nine-play march capped by an 8-yard run by Riley Rothrock.

Coquille’s response was quick — a 30-yard run by Smith, a pair of 8-yard runs by Yates and a 9-yard scamper by Smith to set up the first of three 1-yard touchdown runs by Yates.

That gave Coquille 20-6 lead and the game was essentially over after two time-consuming drives to start the second half, sandwiched around a three-and-out for the Wolverines. The two drives spanned 23 plays and more than 10 minutes of clock time and Santiam again went three-and-out, but Coquille’s next drive wasn’t nearly as long because of a 34-yard run and a 38-yard reception by Yates. Tucker Godfrey capped the third drive with a 3-yard run.

Coquille takes the field after halftime Saturday during a playoff game against Santiam at Coquille High School. The Red Devils beat the Wolver…

For the game, Yates rushed for 181 yards on 17 carries and added 85 yards on three catches. Smith rushed for 122 yards on 22 carries. In all, the Red Devils had just under 400 yards of total offense.

The line was the driving force, as usual.

“They did amazing,” Haagen said. “Every yard we get is for them.”

“Every time I look up, we are halfway down the field,” he said.

Santiam had one more drive, with its only four first downs of the second half to make the final statistics a little more respectable.

The Wolverines ended up with 144 yards, though 15 of their 40 carries went for 1 yard or less — including nine for losses. But Coquille stopped the Wolverines inside the 5 on downs.

And the Red Devils weren’t worried after the ominous start.

“We were confident,” Haagen said. “We had a couple of loose screws we needed to tighten up, and then just execute.”

Coquille did just that, Thomason said.

“I can’t be more proud of the guys,” he said. “We got the monkey off our back from last year.”

Coquille did it without senior star Caiden Yates, Gunner’s older brother and the offensive and defensive player of the year in the Sunset Conference for the second straight season, who is out with a knee injury.

“We had a lot of guys step up,” Thomason said.

Freshman Howard Blanton filled in for Caiden Yates on defense. Garrett Gardner, normally a receiver, took the third spot in the backfield most of the day and did a good job as a lead blocker on a number of the long runs.

Now Coquille is preparing for another home game and a chance to reach the semifinals for the second time in four years.

They will use the past week as a template.

“We are going in to practice focused,” Haagen said.