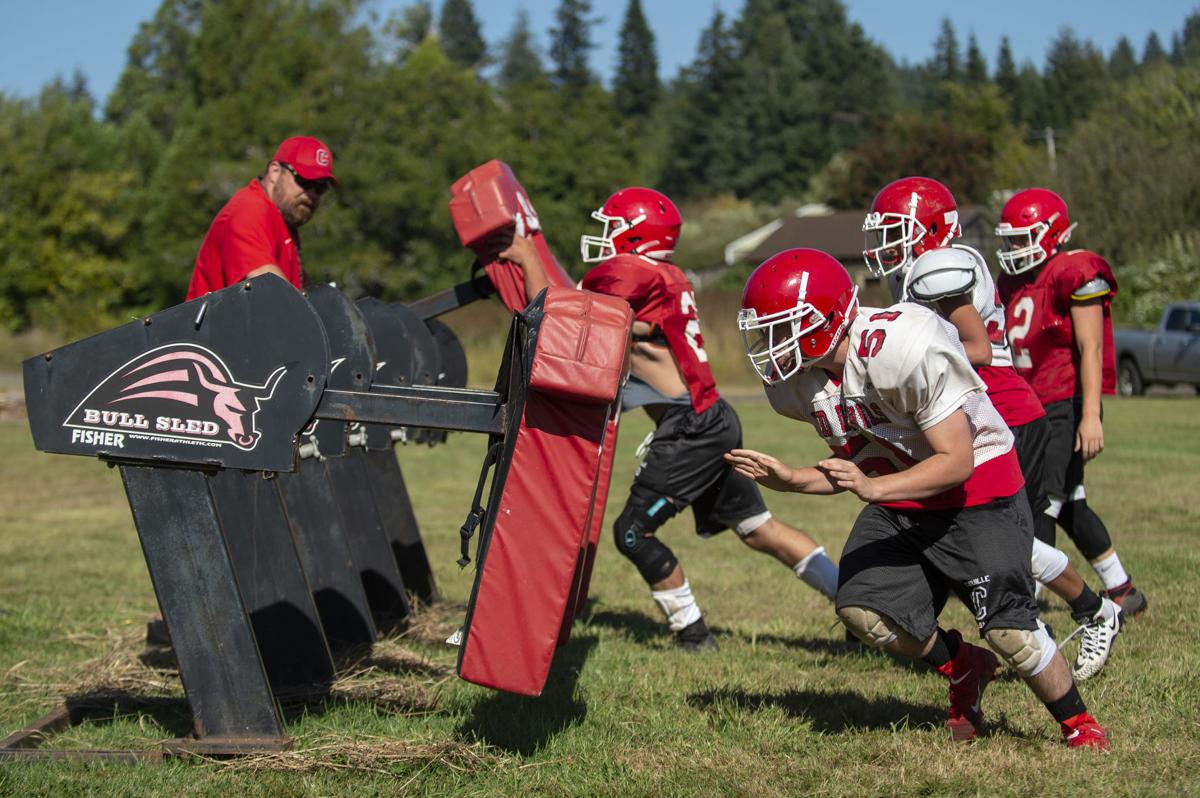 Coquille players attack a blocking sled during an Aug. 27 practice at Coquille High School. The team starts its season at home Friday against Oakland. 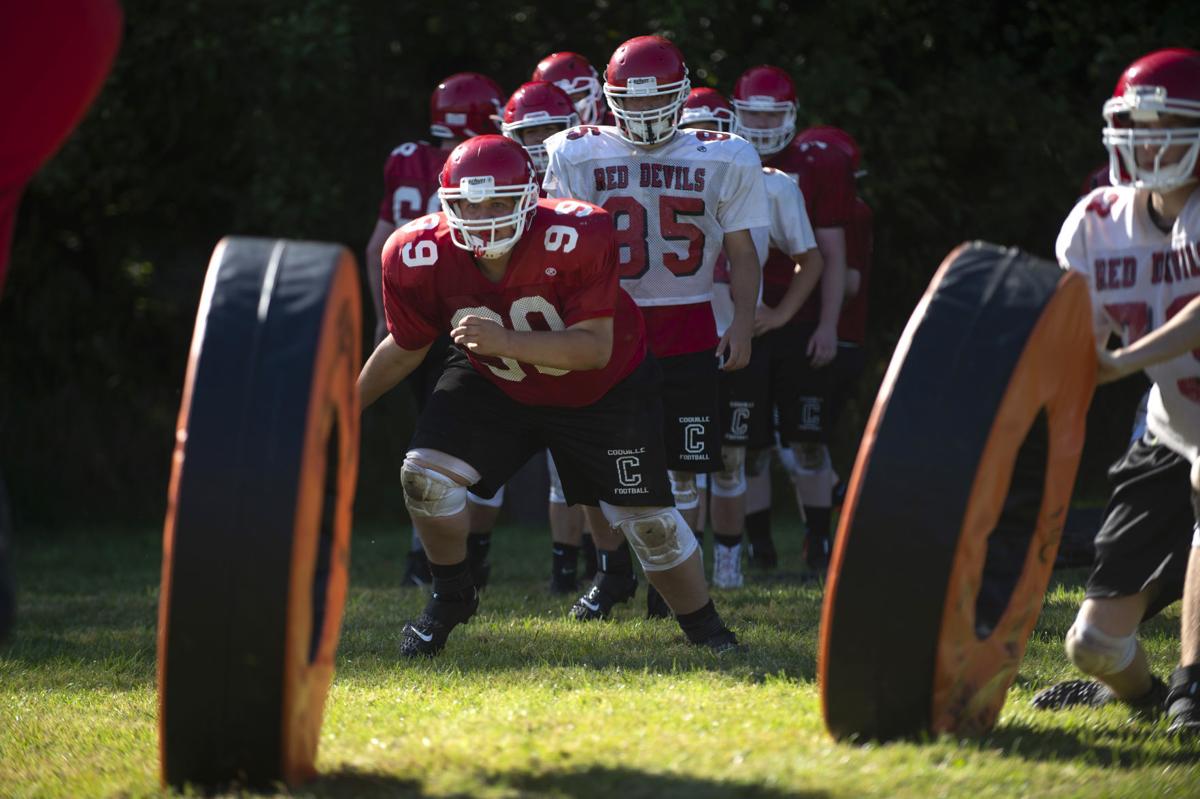 The Red Devils line up to run down tackling rings during a preseason practice. 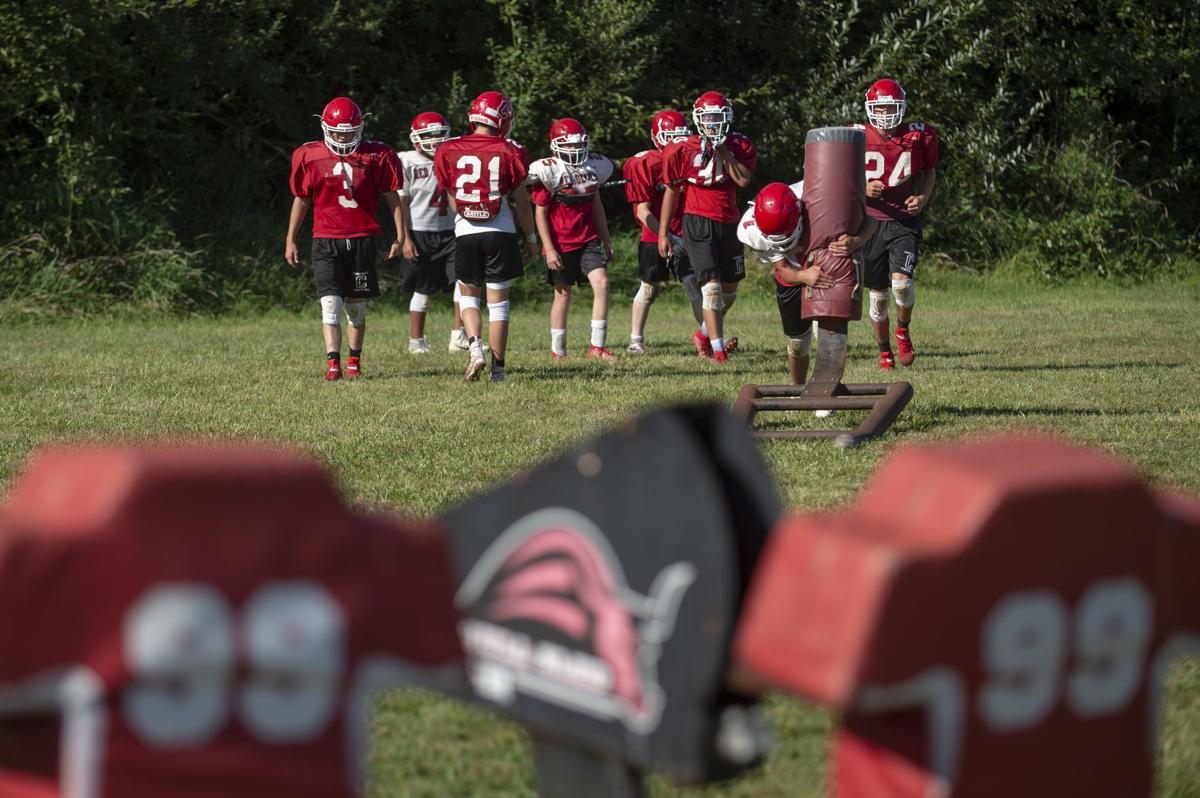 The Red Devils work out driving a sled down field during an Aug. 27 practice at Coquille High School.

COQUILLE — For a number of years, Coquille has had one of the most prolific offenses in the state, with the Red Devils using their wing-T scheme to run around or through opposing defenses seemingly at will.

Coquille has benefited from an efficient line and a string of outstanding backs — a recipe that appears in place again this fall.

“Oh my, the backfield is going to be crazy,” Coquille coach David Thomason said.

The Red Devils line up to run down tackling rings during a preseason practice.

On one memorable night last year, Caiden Yates set what was believed to be the school’s single-season rushing record in the same game that Ean Smith broke the single-game mark.

They are both back this fall, now seniors, and sophomore Gunner Yates might turn out to be the best of the bunch.

“We are looking at Ean or Caiden interchangeably at fullback or halfback,” Thomason said. “And getting Gunner the ball with any space is going to be unreal.”

Gunner Yates is one of the fastest kids in the state, something the Red Devils displayed occasionally last fall, though he made his bigger impact on defense as an all-league pick.

Caiden Yates was the offensive and defensive player of the year for the Sunset Conference and a first-team all-state linebacker and second-team running back, but he is more than happy to share the carries in Coquille’s offense.

“It takes the weight off my shoulders,” he said, adding, “I like blocking for my little brother.”

In the Wing-T, backs become blockers when they don’t have the ball, helping what should be another strong line for Coquille.

The Red Devils return several pieces of the line, and this year the group could collectively be the biggest in recent years.

Zach Kissinger, the biggest of the bunch at 6-foot-5 and about 300 pounds, moves from center to right tackle this year, while Garet Hyatt moves into the center spot, with the two all-league linemen essentially switching places. Fellow senior Renzai Martin also returns, with senior Caleb Prince and sophomore Patrick Adams filling the other two spots.

“I think we filled in the spots pretty good,” Kissinger said.

The two offensive groups — the backfield and line — have mutual respect and appreciation for each other.

“(The line) is definitely an important part,” Kissinger said. “But I also think our backs are a big part of why we’re good. They’re great players. I think they’re the best running backs in the state.”

Smith said the running backs thrive because of the guys up front.

“If the line does what it’s supposed to, we have lanes to run for days,” he said. “The line makes us look good.

“I have confidence in them. I have faith in everybody out here.”

Coquille also has the luxury of a returning quarterback in junior Jace Haagen.

“Having Jace with a year under his belt is phenomenal,” Smith said. “We’re already way ahead of the game.

The Red Devils don’t throw the ball a lot, but when they do, Haagen’s targets including returning split end Garrett Gardner and tight end Brayden Clayburn, both juniors.

Coquille also returns the bulk of a defense that only gave up more than three touchdowns twice in 10 contests last year and three times allowed just one score.

The linebacking corps includes returning starters Caiden Yates, fellow all-league first-teamer Smith and Clayburn (a second-team all-league pick). And all the defensive backs got starting experience, too, including Gunner Yates, a first-team all-league pick, and Haagen at the cornerback spots and senior Tucker Godfrey and Gardner at safety.

The Red Devils work out driving a sled down field during an Aug. 27 practice at Coquille High School.

Kissinger was a first-team pick on the defensive line and will be joined up front by Hyatt, Martin and two newcomers to the primary rotation — senior Dylan Arredondo and sophomore Grady Arriola.

Just like on offense, they will take up a lot of space on defense with their size.

“They eat up blocks,” Smith said. “It makes us linebackers look good.”

“We might not make all the plays in the backfield, but we make them possible,” he said.

All the pieces are in place for Coquille to extend its run of recent success, which has included a few league titles and playoff appearances when the Red Devils didn’t come out on top of the standings.

Last year ended on a down note, with a first-round playoff loss, made worse only because the defeat to Lost River came at home.

That defeat still eats at the players.

“That was very frustrating,” Kissinger said. “I’m definitely ready to get past the first round.”

“We didn’t play as a team,” Caiden Yates said, adding that the Red Devils looked past the Raiders. “We won’t be so cocky this year.”

Smith said he’s been waiting for this season ever since that loss.

“We let that one get away from us,” he said. “It was definitely a feeling we don’t want to have again.”

It’s not just the players who feel that way.

“We’ve got some things to prove,” Thomason said. “We know we’re better than we were last year, and we want everyone else to know, too.”

Marshfield Pirates rely on new players to guide the ship

Season has been a long time coming for Marshfield brothers