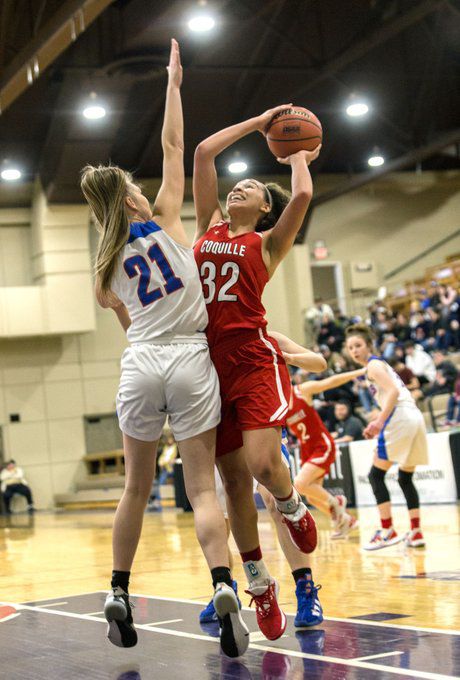 Coquille's Morgan Baird goes to the hoop during the fourth-place game against Central Linn on Saturday. 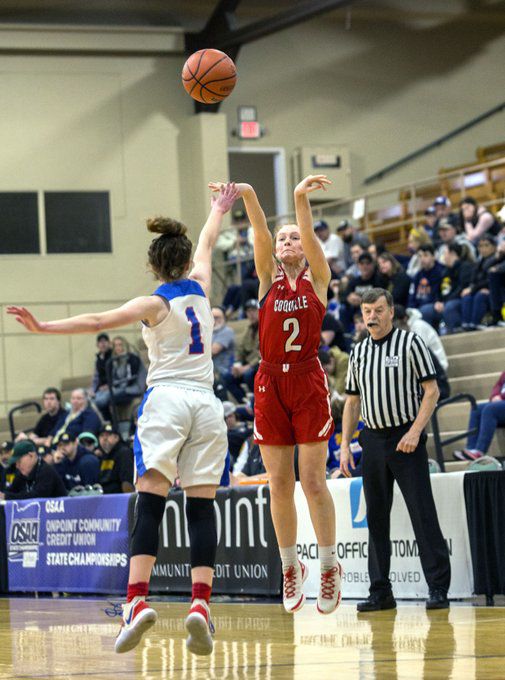 PENDLETON — For the fifth straight year, the Coquille girls basketball team earned a trophy at a state basketball tournament.

The Red Devils placed fourth in the Class 2A tournament, dominating Central Linn 51-34 on Saturday.

“They all played very well,” Coquille coach Tim GeDeros said, after his team outscored the Cobras in every period, pulling away with a 10-3 advantage in the fourth by outscoring Central Linn 10-3. “The defense just totally dominated the game.”

Central Linn shot just 32 percent for the game and committed 16 turnovers. Carlee GeDeros and Morgan Baird had three steals each and Baird had eight rebounds and Mia Ruiz seven.

Baird dominated on offense. Central Linn wasn’t able to stop the senior standout, who had 32 points in her final game on the way to being named first-team all-tournament. Ruiz had eight points.

“I felt we played really well as a team,” Ruiz said. “I’m also super happy we beat Central Linn because that makes up for the loss earlier in the season.”

The only loss for Coquille during the tournament came to eventual champion Kennedy, and the Red Devils played the Trojans better than anybody else, erasing a third-quarter deficit and keeping the game close until Kennedy made free throws late to win by 14.

“I love the way we battled back (in that game),” he said.

Coquille came up short of its goal of a state championship after losing by a point in last year’s final. But the current seniors are on teams that finished fourth this year, second last winter, fourth in 2018 and fifth in 2017. Each of the past three years, the team’s only tournament loss came to the champions.

“Another fourth-place trophy isn’t bad,” Ruiz said. “It is a huge accomplishment. Add it to the collection.”

Baird had the same reflection.

“It was great to earn a trophy all four years,” she said, adding that she was grateful for GeDeros and his brother Tyler, the team’s coaches, and Tim’s wife, Crystal, “who always goes above and beyond to make our trips super fun.”

This year the tournament was special because Coquille had both its girls and boys teams in the event, as did Bandon, which finished third in the girls tournament. Toledo’s boys were the state champions.

“The atmosphere was especially fun this year having five teams from the Sunset Conference represented, and it was a really supportive environment,” Baird said. All of the teams supported each other.”

Tim GeDeros noted that the Red Devils were part of the tough side of the bracket, which produced the winners of all three trophy games Saturday, none of them close.

The Red Devils got a complete performance to beat the Cobras, Tim GeDeros said.

“They couldn’t stop Morgan,” he said. “Carlee handled the pressure great. The team defense — (Central Linn) didn’t know what to do.”

Conner Marchant had 22 points, Mason McAlpine 13 and Gunner Rothenberger 12 for the Boomers.

Payton Richardson had 19 for Western Christian.

Marchant and Richardson were unanimous selections for the all-tournament team. Coquille’s Ean Smith was on the second team.

Crane’s girls held off St. Paul 45-41 to complete a perfect season and win the title at Baker High School. The Buckaroos scored the last eight points, but couldn’t overcome what had been a 12-point deficit entering the final period.

Triad held off Damascus Christian for the boys title 58-56 despite missing five of six free throws in the final minute. Zane Napolin-Sorg had 16 points to lead Triad and Zacob Zakharyuk had 18 for Damascus Christian, which hit 13 3-pointers in a battle of the top two seeds.