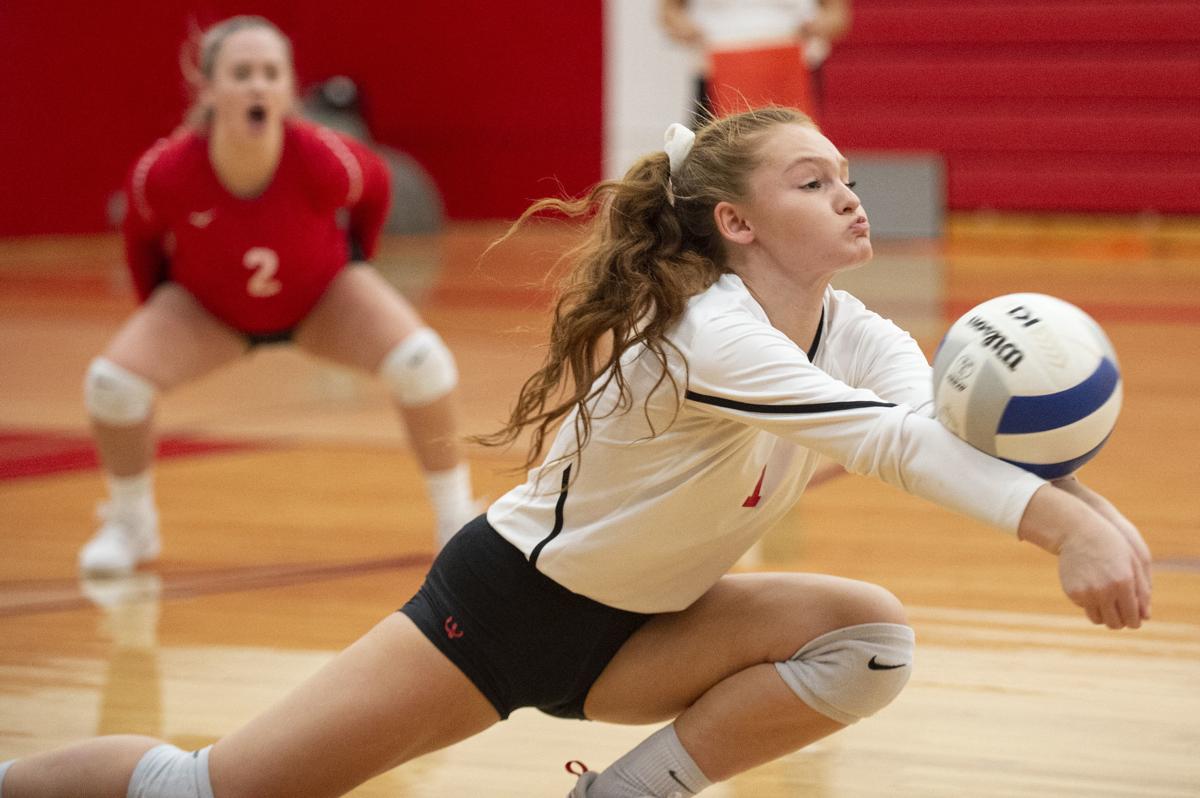 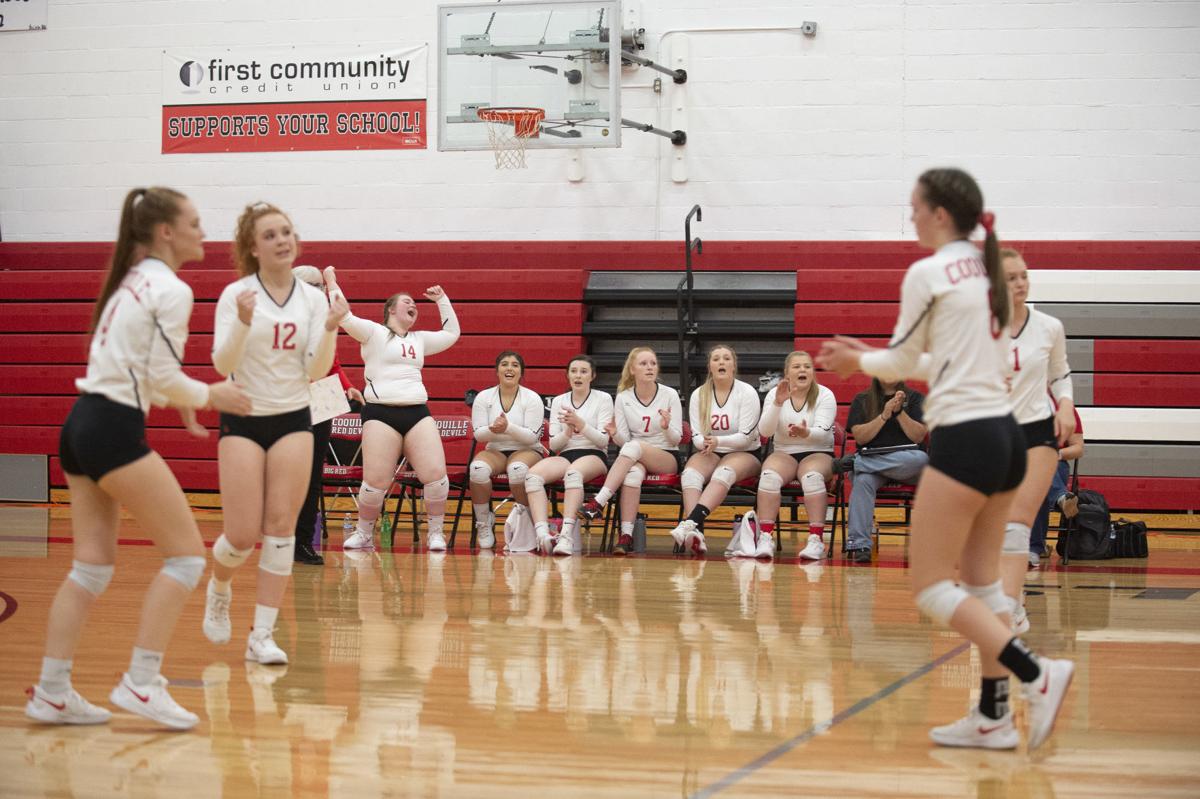 Coquille celebrates a point Saturday during a set against Weston McGewan at Coquille High School.

COQUILLE — Coquille’s impressive run of winning trophies at the state volleyball tournament is over.

Weston-McEwen denied the Red Devils a chance for a sixth straight trophy run by sweeping the host Red Devils 25-9, 25-21, 25-18 in the Class 2A playoffs on Saturday. The TigerScots, like Coquille one of the most successful programs in recent years, advanced to the tournament in Redmond, where they will face Central Linn in the quarterfinals Friday.

Coquille celebrates a point Saturday during a set against Weston McGewan at Coquille High School.

But the Red Devils have a lot to celebrate from a year that included winning another league title despite having to replace seven graduated seniors and another starter who opted not to play the sport this fall.

“Everyone thought we weren’t going to do very good,” said Saige Gallino, one of three seniors with her twin sister, Spencer, and Mariah Jarrett.

Instead, Coquille improved greatly during the season as the newcomers grew comfortable learning their roles on the varsity squad.

“Everybody did good,” Spencer Gallino said. “Mostly, they did the best they could.”

Unfortunately, on Saturday, Coquille had first-set jitters and never recovered on a day when the Red Devils made a few too many mistakes and Weston-McEwen made almost none.

“It’s disappointing to not be going to state, but they came in and played very well,” Coquille coach Suzanne Grami said.

That was particularly true in the first set, when Coquille came out nervous and Weston-McEwen came out fired up.

In the opening set, Coquille never scored a point on its own serve and had just two offensive points — kills by Saige Gallino and Ellie Ekelund.

When the Red Devils did get decent swings on balls, Weston-McEwen was there on defense, with 16 digs and two stuff blocks in the set.

Coquille bounced back and played the TigerScots nearly even the final two sets.

“I think we finally got the jitters out,” Saige Gallino said.

Within the first three points of the second set, Saige Gallino had a kill and setter Drew Wilson an ace. Ekelund also got going with her hitting.

Coquille led 19-16 after three kills by Ekelund and an ace by Spencer Gallino, forcing Weston-McEwen’s second timeout of the set.

The TigerScots finished the second set on a 9-2 run that included two kills by Kendra Zink, a kill and a stuff block by Trinity Hearn and an ace by Emma Olson.

The third set was almost a carbon copy, with the teams even through 16-all before Weston-McEwen had another 9-2 run to close the set, clinch the match and spark a huge celebration.

“We executed and we played with passion,” Weston-McEwen setter Ellie Scheibner, one of the team’s five seniors.

The TigerScots had the benefit of several offensive options.

Zink, Hearn, Jesse Manning and Cloe Davis all had between six and eight kills and Bailey Munck had four more.

“It definitely helps as a setter,” said Scheibner, who finished with 25 assists. “I know every one of my hitters can get the ball into the court.”

In contrast, Ekelund had 10 kills and Saige Gallino eight for the Red Devils and no other teammates had more than one.

That was certainly in part due to the TigerScots’ defense, which included 19 digs by Zink, 12 by Manning and 11 each by Scheibner and Olson.

Saige Gallino had a great final match, with 25 digs. Ekelund had 12 digs and Wilson 11 and Spencer Gallino also had a tough match on defense and strong serving.

But the Red Devils couldn’t come up with the big plays when they needed them.

Last fall, Coquille swept the TigerScots in three straight in the fourth-place match at the Class 2A tournament. It marked the fifth straight year Coquille returned with a trophy from the state tournament, four of those years placing fourth or better.

But seven of the nine Weston-McEwen players on this year’s team returned from that club, while just four of Coquille’s players were back, and they mostly saw limited time.

That made this year’s feat by the Red Devils more impressive.

“Overall, it was a pretty positive season,” Grami said. “We did well.

“Next year, we are going to come back with a lot of experience, which will be good.

“I think we will have a really cohesive team and be ready to go.”

“This was definitely a rebuilding year,” she said.