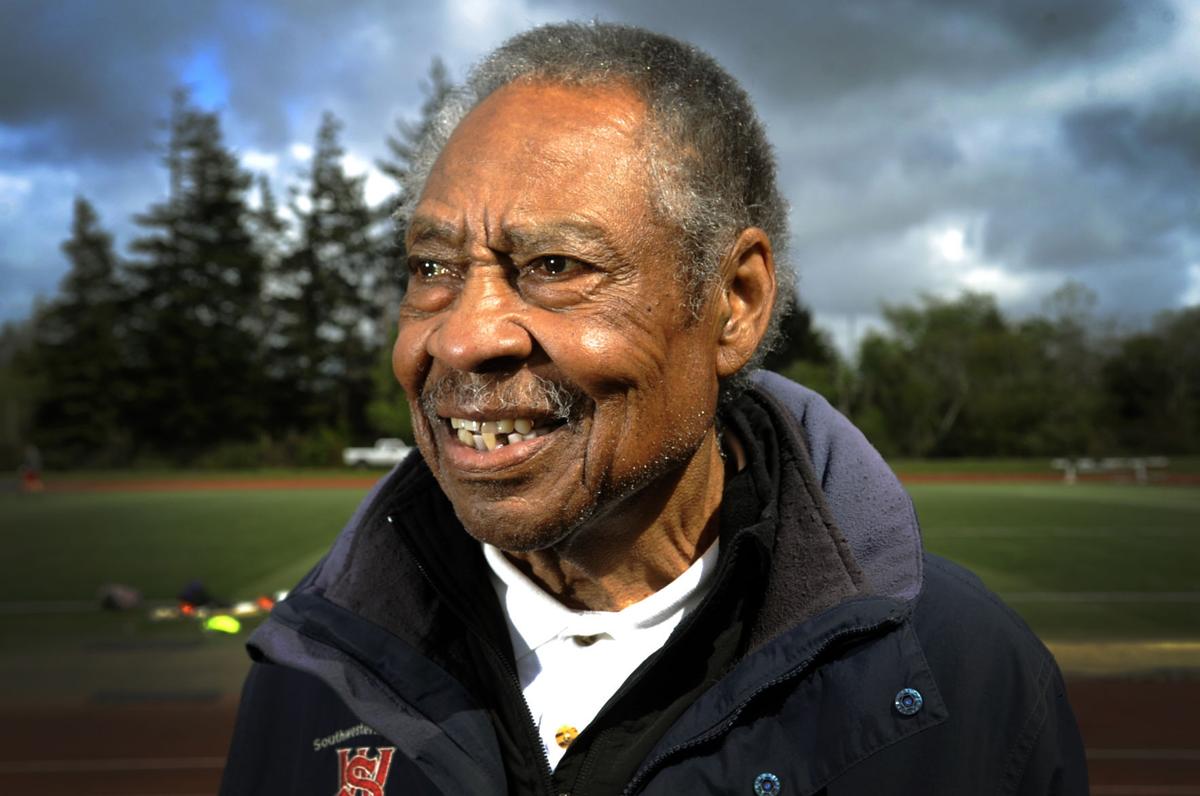 Kermit Walker poses for a photo in 2017, when he was first battling lung cancer, but continuing to coach and teach at Southwestern Oregon Community College. 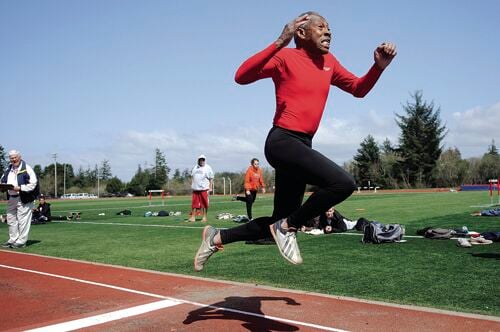 Kermit Walker competes in the triple jump during a masters meet at Southwestern Oregon Community College when he was 75 years old.

Kermit Walker poses for a photo in 2017, when he was first battling lung cancer, but continuing to coach and teach at Southwestern Oregon Community College.

Kermit Walker competes in the triple jump during a masters meet at Southwestern Oregon Community College when he was 75 years old.

The South Coast lost one of its beloved track figures last week when Kermit Walker died after a long battle with cancer.

Walker, who was 85, made his mark on the South Coast as the jumps coach at Southwestern Oregon Community College, but he meant so much more to the community, recalled Dan Neal, his close friend and long-time SWOCC head coach.

“He just had that personality that everyone liked being around him,” Neal said.

Walker had a special bond with SWOCC’s Black athletes, because he was able to share all his experiences growing up with them.

“He was a good example for them, living through what he lived through,” Neal said.

He was raised in Oklahoma where his parents picked cotton and worked to escape that life he hated so much, Neal said.

Walker left Oklahoma to get a college education, competing at San Jose State University and eventually he earned a masters degree in business and physical education. When he first came to the South Coast in 1980, he was a commercial fisherman. His skills also included refinishing old furniture.

Walker was a good counselor and mentor for all students, and also was popular with people beyond their college years.

“He had the 50-and-over fitness class at the college,” Neal said. “It was always the highest-enrolled class we had.”

He also helped adults with their rehabilitation following injuries with exercises that might have seemed odd.

“He did these crazy exercises and leg lifts in the weight room and the kids would watch him,” Neal said. “He was the picture of fitness.”

For decades, every morning Walker did crunches, push-ups, sit-ups and leg lifts before he started his day, Neal said.

Walker was known far beyond the South Coast for his longevity as an athlete himself, competing in regional masters track and field meets until the first time he was diagnosed with cancer, about five years ago.

As he moved up to each new age group, Walker was constantly in pursuit of a masters world record in either the long jump or triple jump. He never quite achieved that goal, but his athletes and community members knew of his efforts.

“The year he was going to try to break the record in the triple jump (at a masters meet in Coos Bay), they made T-shirts with his face on them,” Neal recalled.

Walker was the best in the world for his age group one year, but he was an inch or two off the record.

Among the first people Neal called following Walker’s death were various masters athletes and other coaches from around the state.

“They had a special relationship,” Neal said.

Neal and Walker’s relationship was beyond special, if possible, since they coached together about 20 years and remained friends long after.

“I got to spend the last couple weeks with Kermit almost every day,” he said. “It was a good time. We were joking and laughing. We had great conversations.”

Perhaps surprisingly, it wasn’t track and field that initially sparked their relationship, but music.

Walker had crossed paths with a number of top musicians over the years before Neal knew him.

“I don’t think a lot of people realize he was a great jazz musician,” Neal said.

It wasn’t until much later they realized they had a common love for track.

Neal invited Walker to help out and he started as a volunteer coach before the college was able to pay him as an instructor and later get him a coaching stipend.

Walker coached numerous NWAC champions in the jumping events and lent tips to a number of high schoolers who went on to become state champions.

Neal and Walker took SWOCC athletes to meets around the region and attended many clinics together. And whenever he had the chance, Walker was in the famed heart of Northwest track and field, the University of Oregon’s Hayward Field.

“He lived for track and field,” Neal said. “He was a Hayward Field addict. He loved to go up and perform in their masters meets.”

When he was younger, Walker was a standout in the jumps despite being relatively short.

“You look at someone that stature and you think that guy jumped 26 feet,” Neal said. “He just must have been a human spring. He triple jumped (almost) 54 feet. He was a stud athlete during the day.”

Walker even competed internationally with the U.S. National team.

Walker also was known for telling funny stories and one of Neal’s favorites was from when he competed against former long jump world record holder Bob Beamon.

“The last time I jumped against Bob Beamon, I beat him,” Neal recalled Walker saying. “I jumped 25-10 and he fouled all his preliminary jumps, so I beat him.”

Aside from competing, probably the thing Walker was best known for was his care of the long jump pit.

“It didn’t matter if it was cold, windy, rainy,” Neal said. “He wasn’t going to go home (after practice) unless the pit was spotless. He would sweep it until it was flat as a board and he would cover it.”

Walker also took to making sure the pits were prepared for every jumper at meets the Lakers competed in.

He is renowned for the phrase: “Every jumper deserves a perfect pit.”

“This man is a role model for all of us,” former SWOCC athletic director John Speasl said at the time. “The college, students, coaches and the community are all better for having Kermit Walker touch our lives.”

In announcing the honor for Walker, college officials said “The athletic department believes this small gesture will be a testament to his many years of service and his passion for helping student-athletes.”