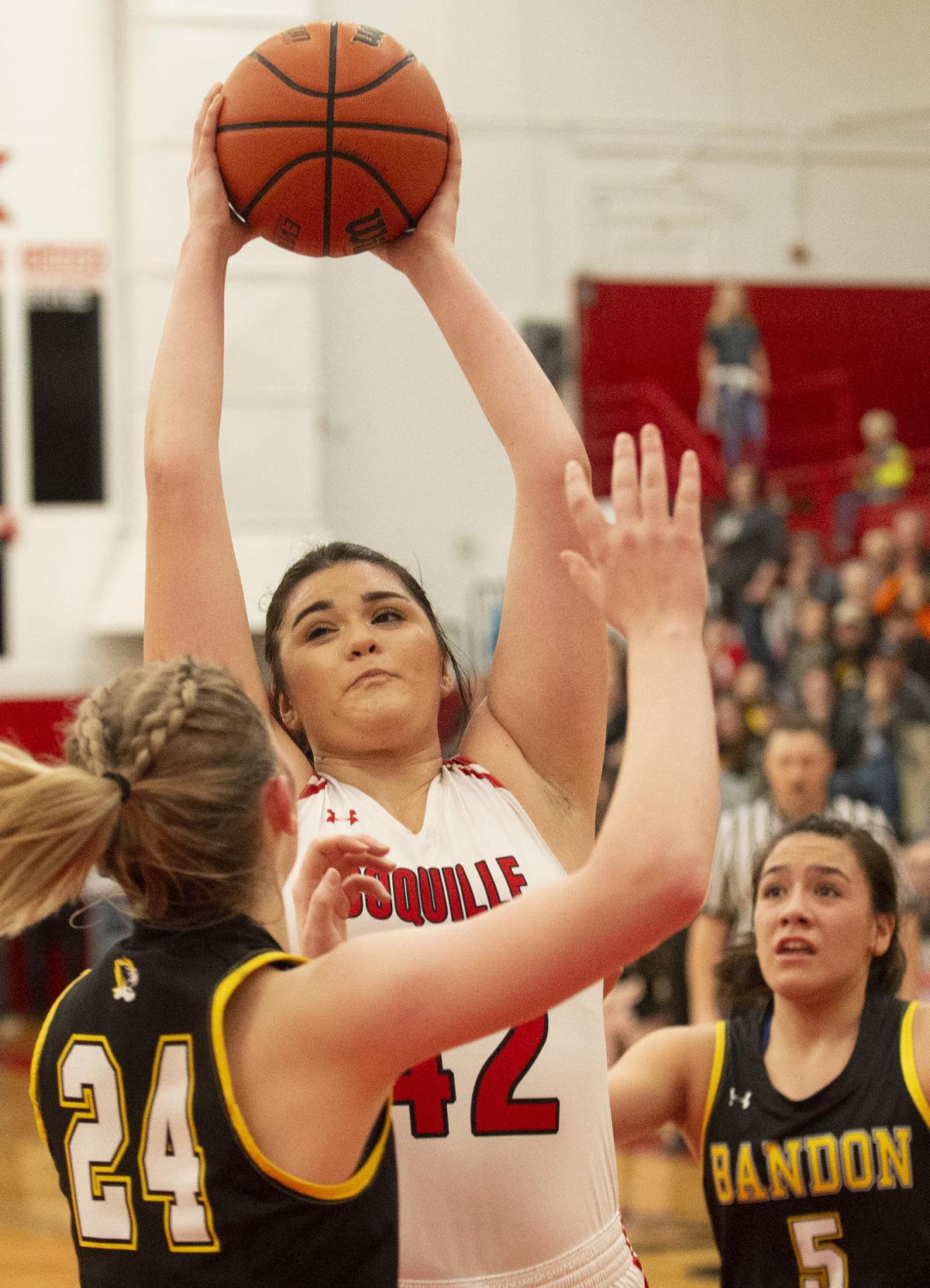 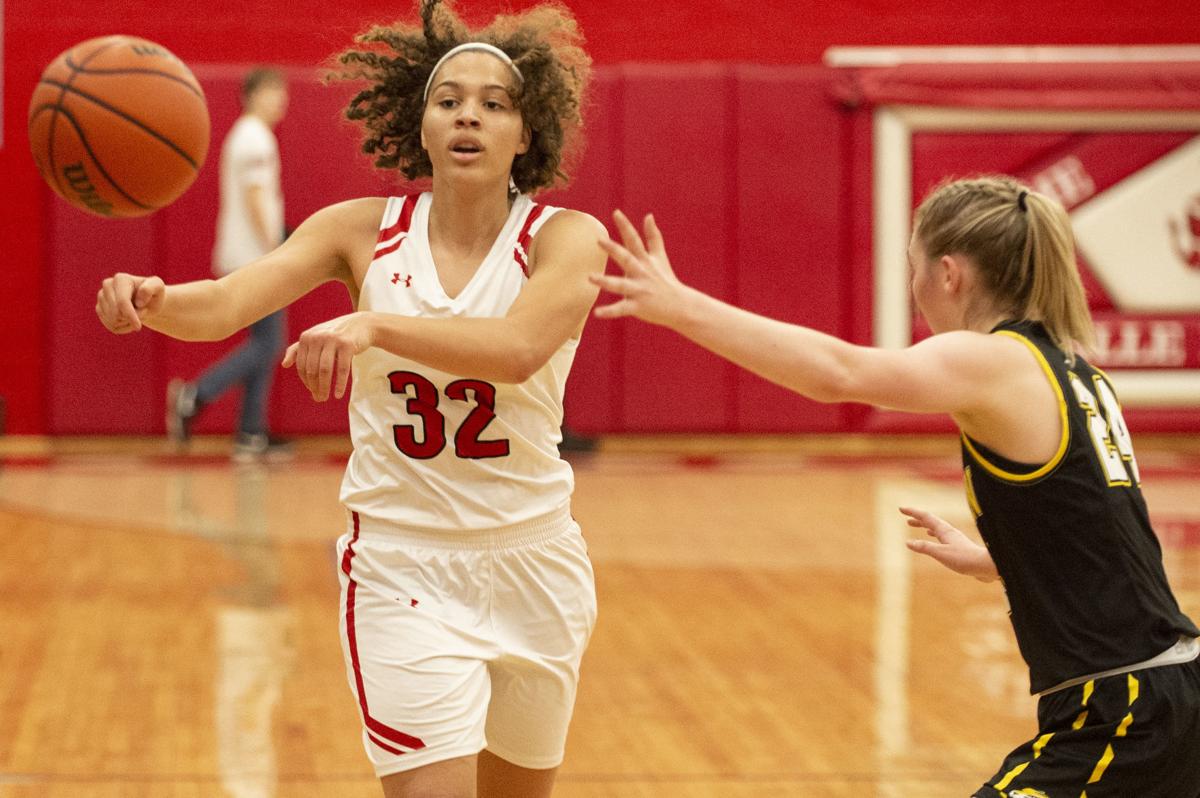 Coquille's Morgan Baird fires a pass during a game against Bandon at Coquille High School. 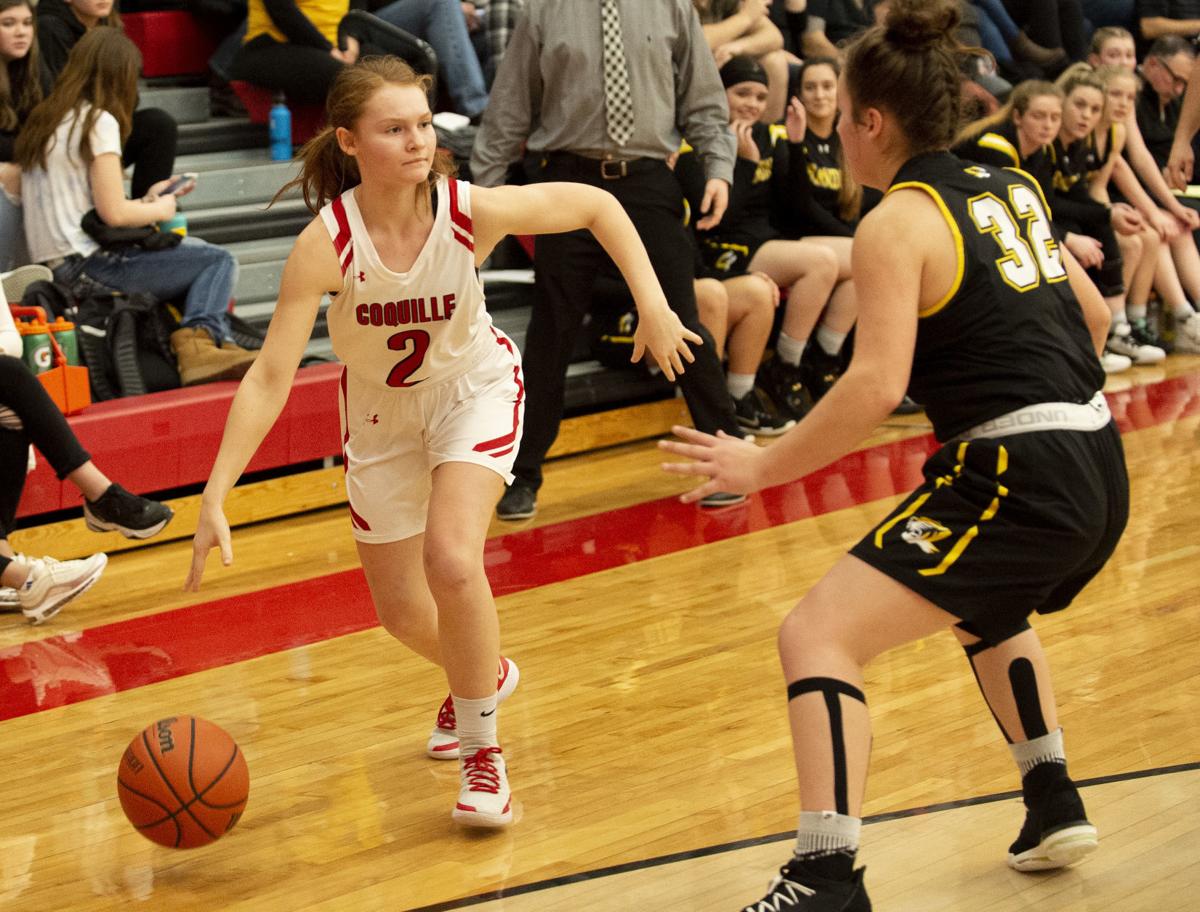 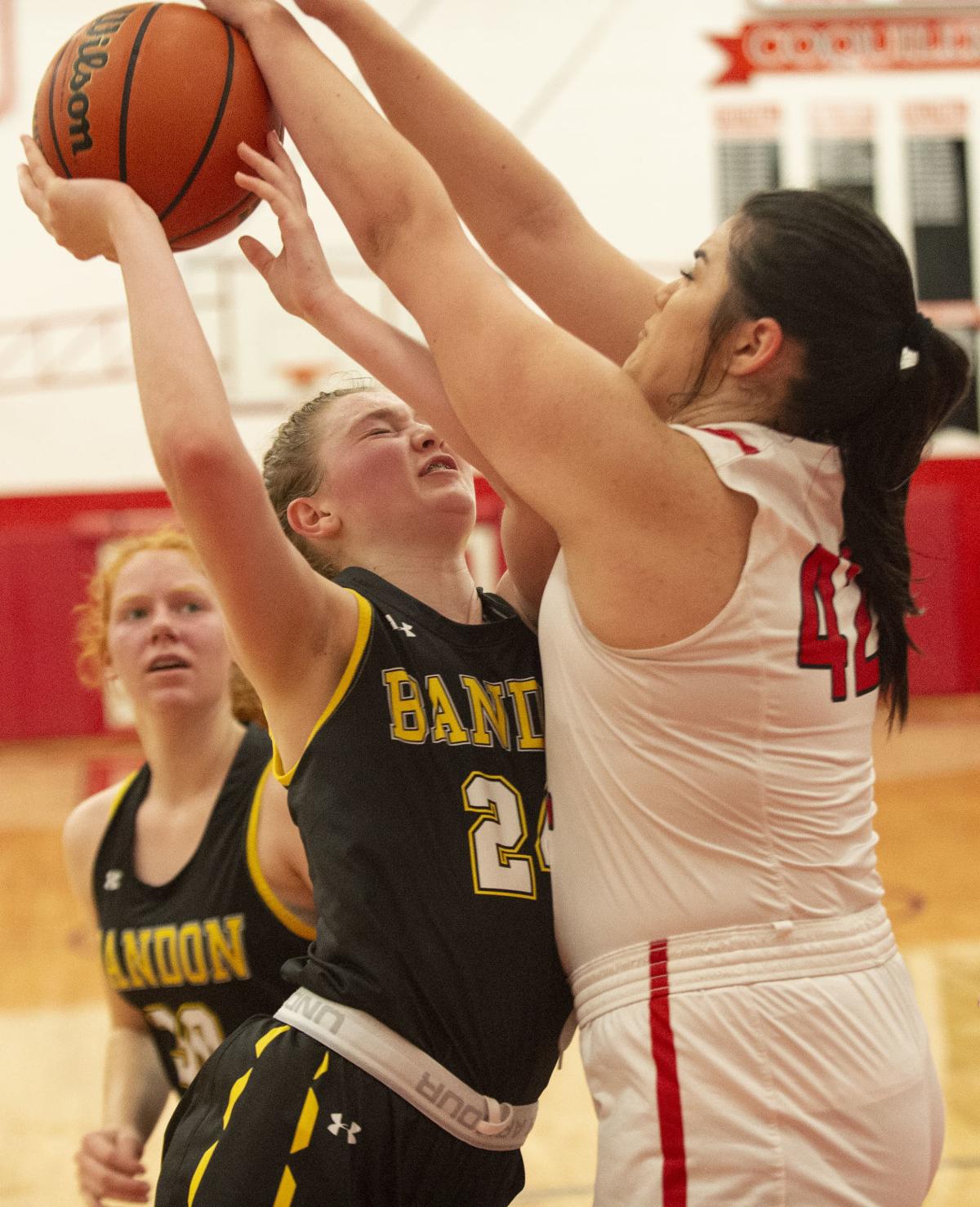 COQUILLE — With offense hard to come by, Bandon turned to its defense to complete the seemingly impossible task of beating Coquille in a league game.

What started with defense turned into transition buckets and free throws as the Tigers, ranked 11th in the most recent coaches poll, moved to the top of the Sunset Conference with a 49-45 victory over No. 2 Coquille. Entering the contest the Red Devils had won 40 league games in a row and had not lost in conference play since Feb. 9, 2016.

Coquille's Morgan Baird fires a pass during a game against Bandon at Coquille High School.

“It means everything,” said Bandon’s Ashley Strain, who hit a pair of free throws late to ice the game. “We’re 6-0 in league right now and it just shows how much potential we have and our expectations for where we want to be. We want to go to state.”

Searching for a signature win on the season, the Tigers were in trouble as they trailed 39-31 with 5:30 left to play. With shots not falling — Bandon finished 15-of-48 (33%) from the field in the game — the Tigers turned to the defense to lift the team.

“We talked before the game that if we find ourselves down, don’t worry about your shooting, don’t worry about I’ve got to create a shot, just lock in defensively,” said Bandon head coach Jordan Sammons. “That’s going to lead to transition because that will lead to rebounds and we’ll get steals and so we just focused on trying to lock in defensively as much as we can.”

Over the next three minutes of the game Bandon put together a 10-0 run to take the lead. Getting the scoring started was Traylyn Arana, who finished with a team-high 18 points.

After her lay-up the Tigers had back-to-back possessions of defensive rebounds in which they were fouled and, because the team was in the bonus, turned into a pair of made free throws each from Kennedy Turner and Naomi Martin.

The free throws were followed up with back-to-back Bandon steals that led to a pair of fast break lay-ups for Arana to give the Tigers a 41-39 lead.

“When someone steals the ball I’m like okay, I’m ready down there, just hit me, I’ve got you,” said Arana.

Not going down without a fight, Coquille’s Morgan Baird, a force on offense all night, hit a runner in the lane to tie the game at 41. Baird was everywhere for the Red Devils as she recorded a game-high 19 points to go with six assists, six rebounds and two blocks.

“They have the best player on the floor in Morgan. We knew we just had to be aggressive tonight and what happens, happens,” said Sammons. “If we’re aggressive and leave everything out, we’ll give ourselves a chance.”

That aggressive nature turned into a lay-up for Bandon’s Eduarda Reolon in transition to give the Tigers a lead once more which was followed by an Arana steal and a Reolon breakaway bucket. Free throws by Arana and two more from Strain, who was six-of-six from the line put the game away for good.

“Down the stretch we hit them really well,” Sammons said of his team as they went 18-for-24 from the line, including 10-of-12 in the fourth quarter. “It was kind of like just a great moment as a coach to see (Strain) at the line at the end, shooting two just because I know how hard she’s worked for it. She stepped up there and was confident.”

Strain was one of three Bandon players to finish with eight points. Joining her was Turner who also added seven rebounds and Reolon who pitched in five steals, five rebounds and two assists.

The game was tied at 11 through one period before a 7-0 run to start the second quarter give the Red Devils an 18-11 advantage. The Tigers missed early and often in the quarter and ended a seven-minute scoring drought with free throws from Strain.

A 6-0 run from Bandon made it a 20-17 Coquille lead at the break. The Red Devils continued to make runs and again led by six at the end of the third period but the Tigers kept attacking.

Coquille’s Haley Combie and Mia Ruiz each finished the game with eight points. Ruiz brought down seven rebounds while Combie had five.

Now for both teams is the second half of the league schedule. Coquille heads to Reedsport and Myrtle Point next week followed by non-league games against Central Linn and North Douglas. With eight games left on the schedule, GeDeros has a couple things he wants to work on with his team.

“We’ve got to focus (on) everything,” he said. “Basically taking care of the basketball and not fouling.”

The Tigers have one last road game at Waldport next Tuesday before six straight home games to finish out the season. The last game of the regular season is the rematch: Coquille at Bandon on Feb. 17. Until then, Bandon is looking to enjoy Friday’s victory as the Tigers look to improve.

“Yeah it’s a good win. We’re happy. But we need to keep our feet on the ground because we’re going to play all these teams again,” said Reolon. “So we can’t lose focus. We won a game but we’ve won nothing. It’s just a game.”

Struggling to score against Bandon’s aggressive zone defense, Coquille’s boys basketball team came up with a solution Friday night — get the ball in to Jeremy Kistner.