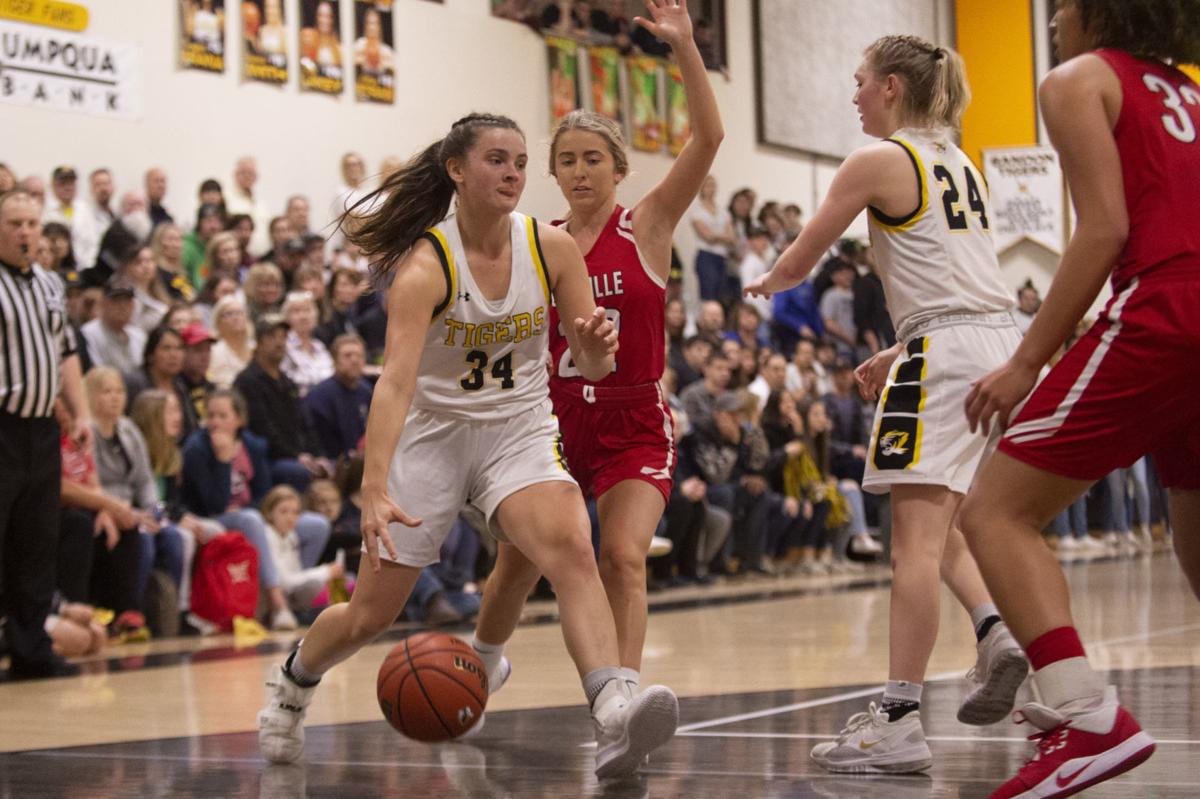 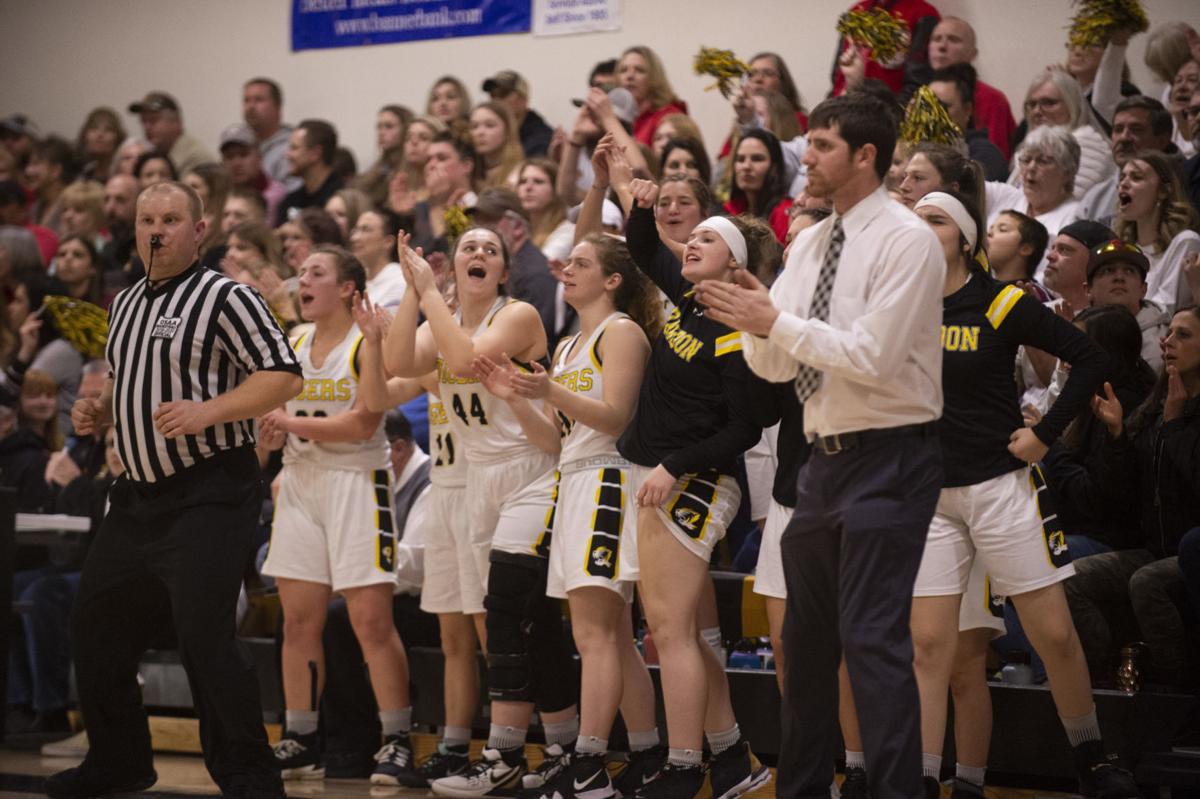 The Bandon bench reacts to a basket Monday during a game against Coquille at Bandon High School.

With an overcapacity crowd filling the stands — and spilling out of each corner of the gym — the Bandon girls secured the outright Sunset League title on Monday night with a 52-50 win over Coquille. And to cap the victory, Bandon’s 21st straight win, the Tigers cut the net on the north end of the court at the end of the night in celebration.

The Bandon bench reacts to a basket Monday during a game against Coquille at Bandon High School.

To be crowned champs, Bandon had to dethrone Coquille, a team that had won four straight league titles — one Sunset Conference title at the 2A level and three in the Class 3A Mountain Valley Conference. The Tigers won the first matchup between the two sides that have hopes for a trip to Pendleton for the state tournament. A Red Devils win on Monday would have forced a one-game seeding game to determine the top seed coming out of the league.

But Bandon had other plans.

The Tigers led by as many as 12 points in the third quarter, but throughout the period the Red Devils chipped away at the lead. Coquille used an 8-0 run to knot the game up at 35 entering the fourth quarter before going up 37-35.

With her team trailing for the first time since the score was 6-4, Reolon responded. With back-to-back three-point plays followed by a pair of 3-pointers later in the quarter, Reolon scored 13 of Bandon’s 19 fourth-quarter points and finished with 17 points.

“The girls were playing and the ball just ended at me,” said Reolon, an exchange student from Brazil. “The girls were screening and it ended on me. The 3-pointers I shot were wide open. And it was awesome.”

Not going down without a fight, Coquille got a pair of baskets down low from Morgan Baird to tie the game at 39. Baird was the center of Bandon’s defensive game plan and was often picked up the entire length of the court when the Red Devils had the ball. She finished with a game-high 22 points, including eight in the fourth quarter.

Reolon’s 3-pointers gave Bandon a six-point lead with under 3 minutes to play but the Red Devils kept on fighting and on three separate occasions made it a two-point game in the final minutes, including a 3-pointer from Saige Gallino to make it 52-50 with 5.3 seconds left.

After a Bandon timeout before a possible five-second call on the inbound, the Tigers successfully inbounded the ball and, after a missed free throw, claimed the victory.

“Lucky for us they had a timeout left because we had a steal there and five seconds I’m sure she would have made that bucket in five seconds,” said Coquille head coach Tim GeDeros. But ultimately for GeDeros, with his team ranked No. 6 in the Oregon School Activities Association power rankings and finishing at 21-4 on the regular season, the focus is just on moving forward.

“I just told them, hey, a game like that makes us better. And we’ve played four of them this year. You know, and now you have to play and work to get a league game against somebody in the league.”

Coquille will host the winner of a Wednesday game between Toledo and Waldport on Friday for the league's second automatic spot in the playoffs.

With excitement, nerves and a league title hanging in the balance, the game got off to a slow start. Coquille scored off the opening tip but with 2:30 left in the first period, the game was tied at 4-4. Bandon finished with 11 first quarter turnovers while Coquille had nine.

“I think we were all nervous at first and then we were like, we got this and it just boosted our confidence up and then we were going at it,” said Bandon’s Traylyn Arana, who finished with 17 points. Bandon also got a full performance from Kennedy Turner who had 10 points, nine rebounds and four blocks.

Arana recorded back-to-back lay-ups to start the second quarter and went on to score eight points during the second period, helping the Tigers take a 24-15 lead at the half.

“We got back into doing what we normally do. I thought we did strong but as you could kind of see, our defense was not strong. And that played a big part in the loss,” said Baird.

“I mean, we didn’t play well and Bandon played great. I’m really happy for them winning league, but we didn’t deserve it.”

The Red Devils now await the winner of Wednesday’s game in Toledo and will hope to keep their power ranking high enough to get a home game in the playoffs.

For Bandon, the Tigers now will enjoy a day off on Tuesday before getting back to practice on Wednesday. They know they will host a state playoff game a week from Friday.

“(Coquille is) a great team and we just had to keep responding and I was so happy with them that they kept responding and finding a way,” said Sammons.

Butte Falls packed a powerful one-two punch against Reedsport on Monday afternoon as the Brave finished the season with a nonleague game at home.