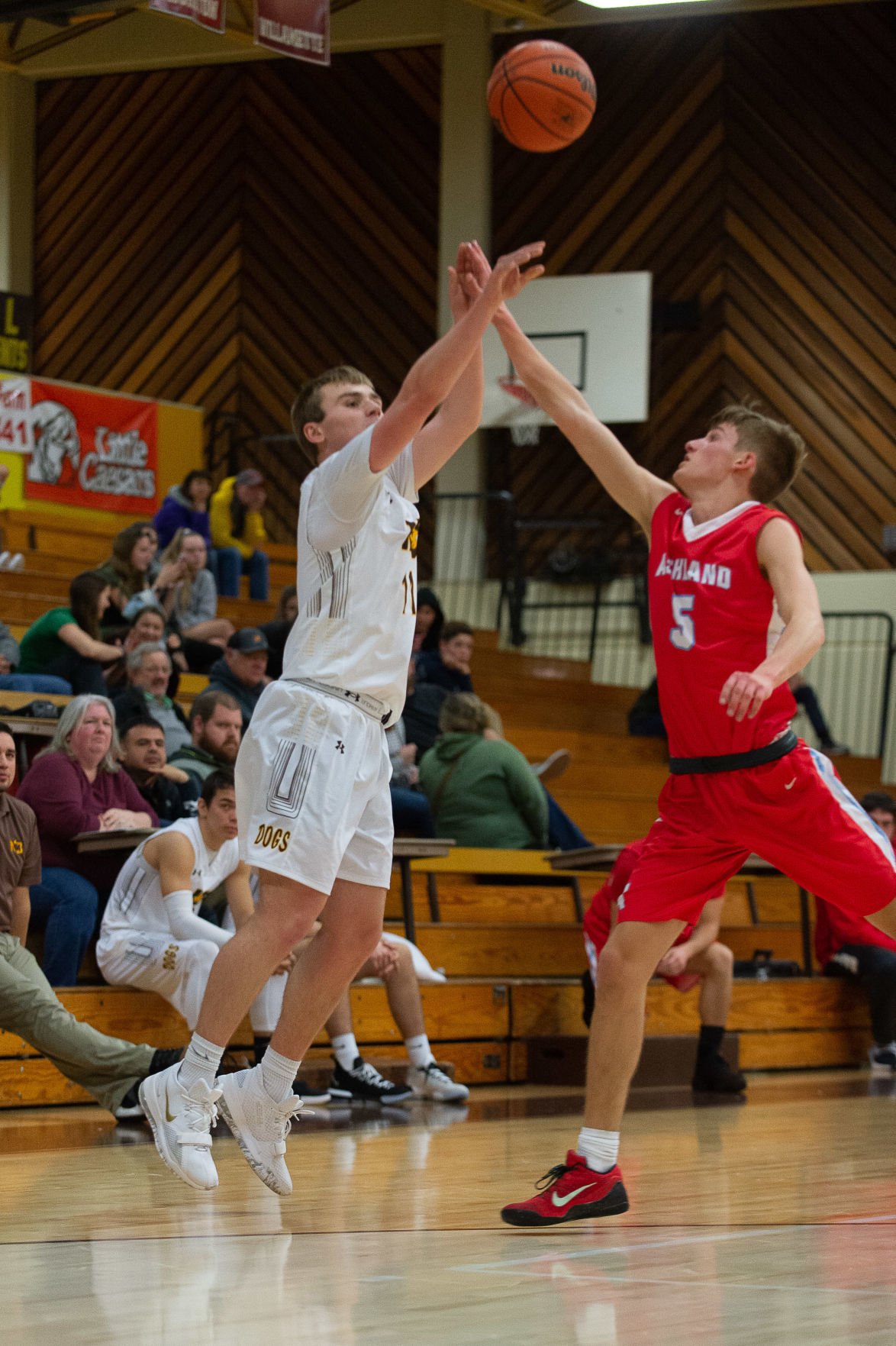 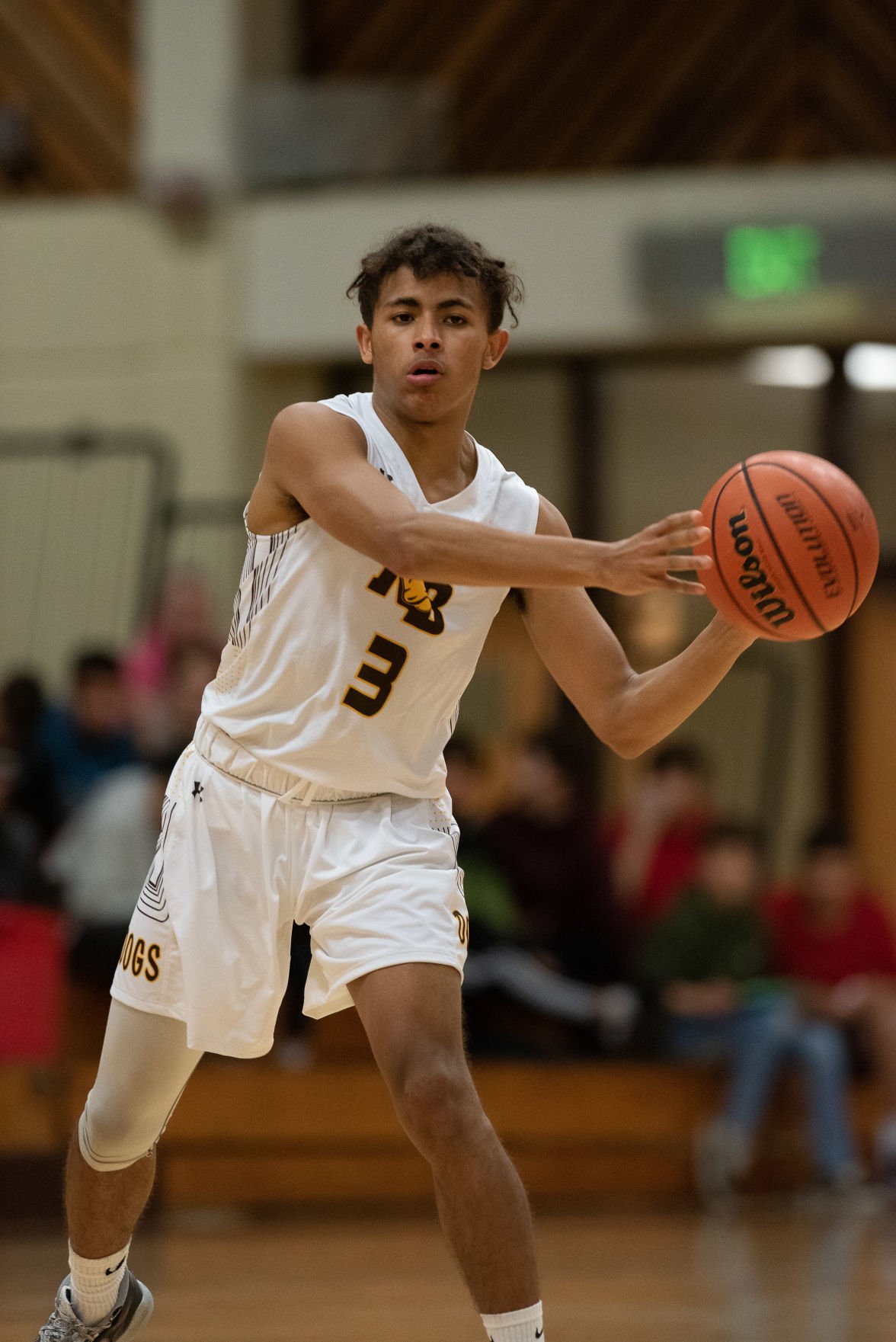 North Bend's Devante Byers passes the ball to a teammate during Friday's game against Ashland.

The Bulldogs had the ball trailing Ashland by one point in the final 30 seconds before the Grizzlies came up with a big play and finished off a 49-45 win.

“It was one of those where one play made the difference,” North Bend coach Bill Callaway said.

North Bend's Devante Byers passes the ball to a teammate during Friday's game against Ashland.

It also was a tight game throughout — Ashland’s biggest lead was the final margin — and a game of runs. North Bend led by six points in the second quarter and seven in the third, only to see the Grizzlies come back each time.

North Bend’s last lead came at 44-42 on a drive to the hoop by John Burgmeier three minutes into the fourth period, but Ashland went in front with a jumper from Nate Whitlock and two free throws from Anthony Smith (a rarity on a night the Grizzlies were just 5-for-14 from the line).

North Bend’s Brady Messner pulled the Bulldogs within one, hitting a free throw with three minutes to go. But that turned out to be North Bend’s last point.

Still, the score remained 46-45 inside the final minute.

Callaway called time to try to set up a play with 38 seconds to go. Messner tried to dribble through a double-team by Ashland’s Smith and Finn Hilden, but Hilden stole the ball and fed to Smith for a layup and three-point edge.

North Bend had two 3-pointers to tie, rebounding the first, but on the second one the ball wedged between the rim and backboard, giving possession to the Grizzlies, who got a free throw by Toby Barnes to clinch it.

“It’s kind of frustrating,” said Messner after the Bulldogs fell to 0-4 in league play.

It was North Bend’s first close league game and the Bulldogs did a lot of things right.

For the most part, the Bulldogs took only open shots set up by patient offense or shots at the rim.

“We moved the ball faster today, and got more opportunities,” Messner said.

They also almost matched Ashland rebound-for-rebound and had just 10 turnovers, though the Grizzlies had just seven.

“We’ve been working hard (on rebounding),” Callaway said. “This is one of the teams we can match up with for size.”

Messner said the Bulldogs played better, but can improve.

“We need to grow in a lot of places,” he said. “We need to get tougher — on defense and attacking the basket.”

The first period was a defensive battle, ending tied at eight. But both offenses took off in the second, spurred by outside shooting.

Messner and Garrison Mateski hit 3-pointers to open the quarter, giving the Bulldogs a six-point lead. But Ashland responded with eight straight points, including 3-pointers by both Barnes and Hilden. Messner and Hilden traded 3-pointers and Mateski scored inside before Hilden hit another 3.

North Bend finished the quarter on a 6-2 run that included two free throws by Devante Byers and two hoops from Mateski to take a 25-24 lead to the locker room.

The teams traded the lead five times early in the third, which included a 3-pointer from North Bend’s Maddux Mateski, before Messner scored eight straight points — a bucket, a 3-pointer and a three-point play when the Grizzlies were called for goal tending — to give North Bend its biggest lead at 38-31.

But Ashland scored eight in a row bridging the third and fourth periods to go back in front.

“We stopped looking to score after we went up 38-31,” Callaway said. “We had another little spurt there, but that was it.”

“It was a game of who was going to make the last shot,” Callaway said.

Unfortunately for North Bend, it was the Grizzlies.

Whitlock finished with 16 points for Ashland and Hilden added 15.

North Bend is home again Tuesday, against Springfield, and then travels to Eagle Point on Friday before hosting Marshfield in the annual Civil War on Saturday.

Bryan Roberts has another perfect game at North Bend Lanes

Bryan Roberts had the first 300 game of the new year at North Bend Lanes when he rolled one during the first Men’s Coast league night of 2020.