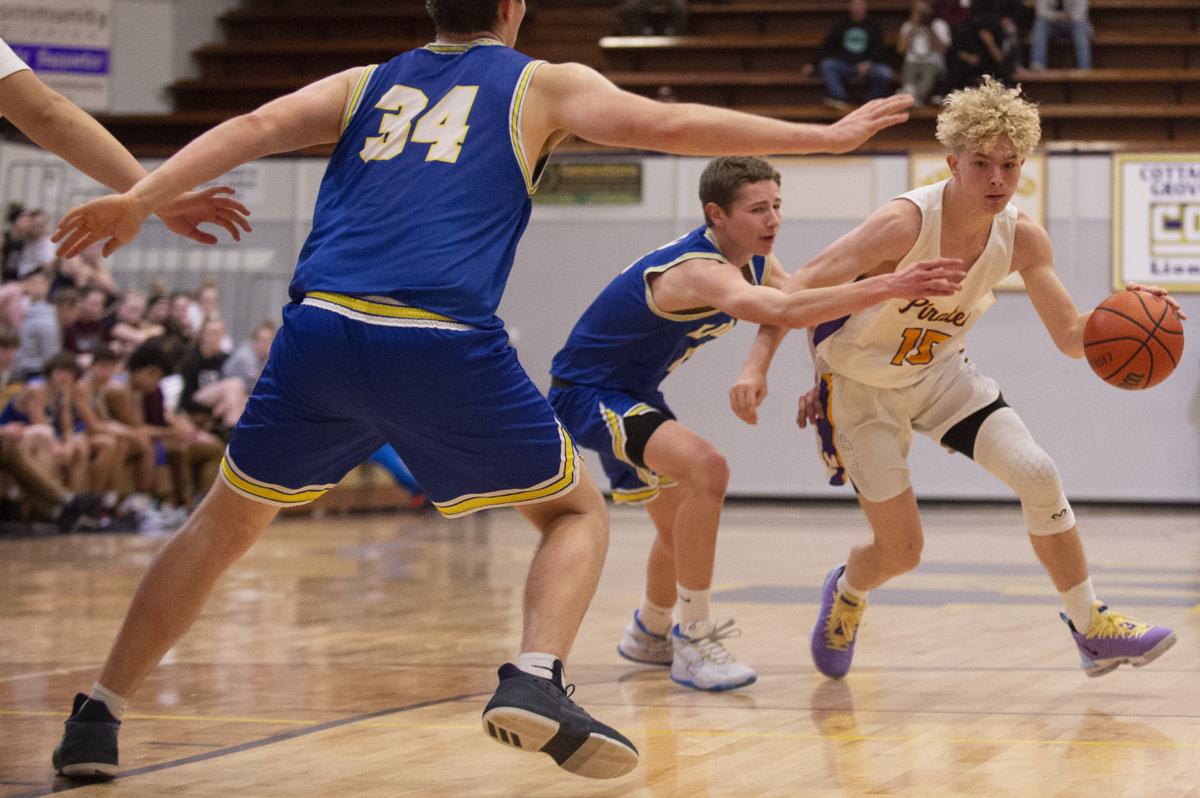 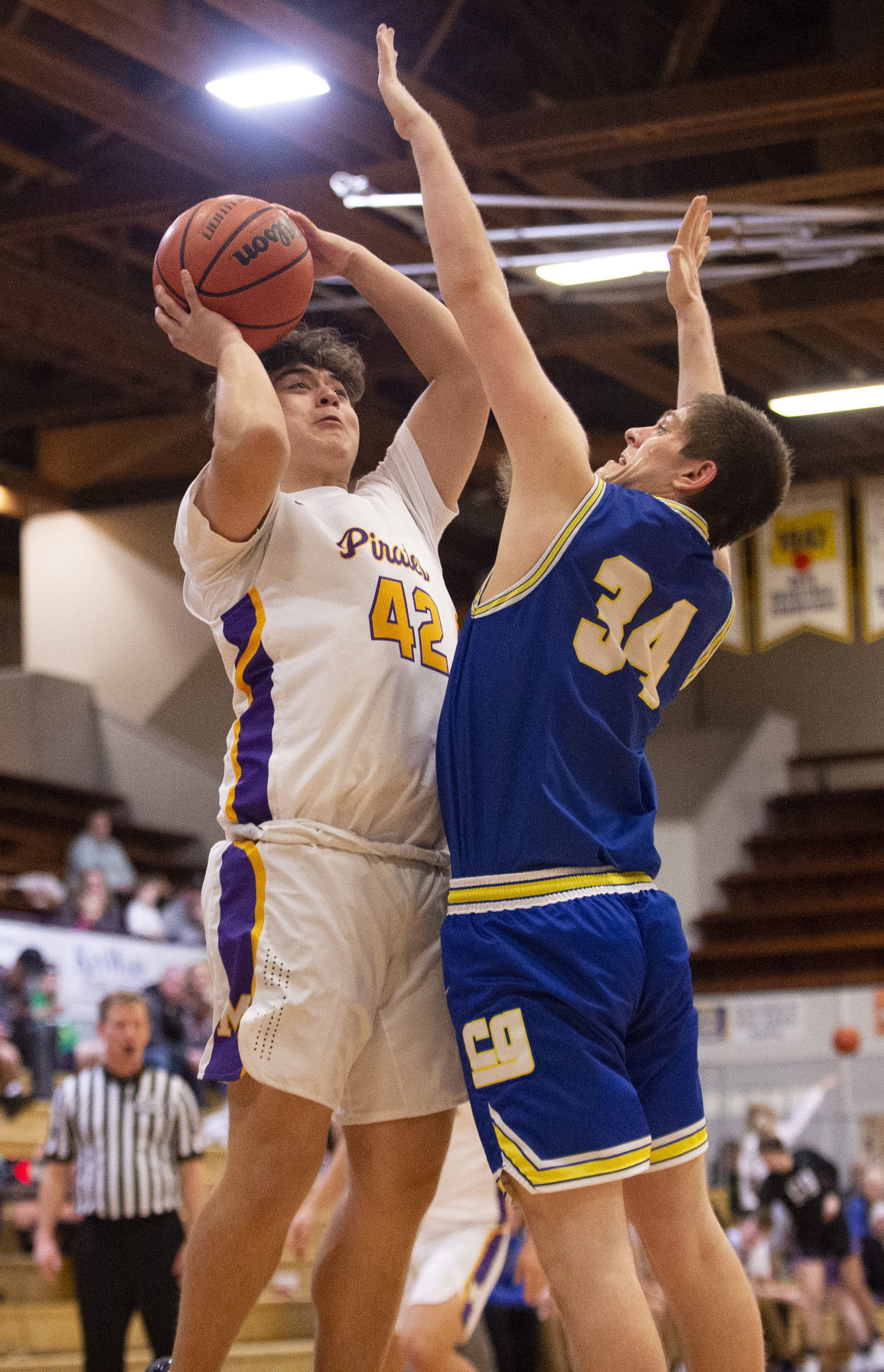 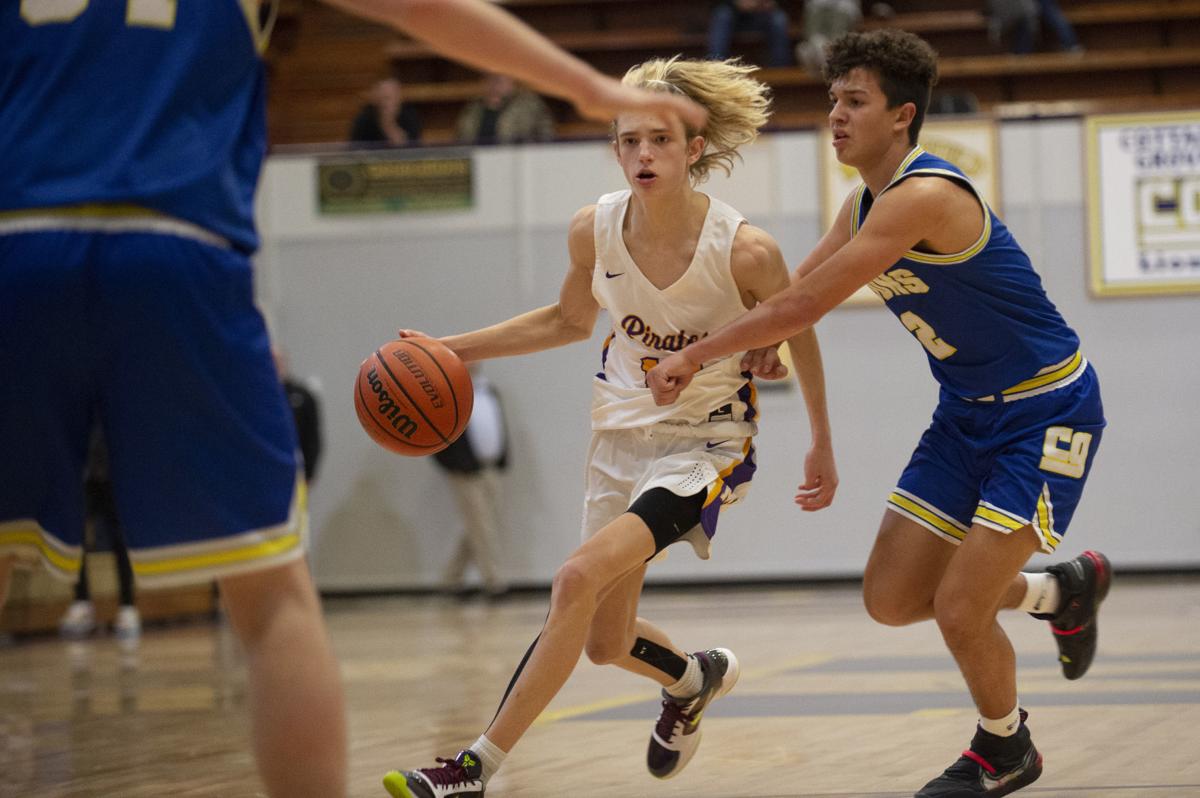 COOS BAY — It all started with a corner 3.

After the Pirates slept-walked through the first half, pairing missed shots with lethargic defense along the way, Marshfield's boys basketball team woke up and looked deserving of its No. 8 ranking from the start of the second half.

Against Cottage Grove on Tuesday night the Pirates turned a five-point halftime lead into a 76-51 rout of the Lions. Marshfield improved to 11-4 overall and 2-0 in the Sky-Em League, while the Lions are 4-12 and 0-2.

What turned into on offensive onslaught all started with the first play of the third quarter.

“At halftime, I told coach, hey, can we get a ball screen and put Pierce in the corner? And then I drove, kicked it and he hit it,” said Marshfield’s Mason Ainsworth who finished with 28 points. The swooshed corner 3-pointer kicked off an exhilarating third quarter from Ainsworth and Davidson.

The sophomore scoring duo combined to shoot 11-of-13 from the field in the quarter, including six-of-eight from 3-point range, as they accounted for all 29 of Marshfield’s points.

“We were just trying to get each other going and try to figure out a good solution for the first half,” said Davidson, who finished the game with 21 points, including 15 in the third quarter. “As soon as I hit my first one I’m like, O.K., I’m kind of feeling it now. So I was just talking to my teammates, if I’m open, pass it. Try to get us going.”

After an Ainsworth steal, he passed to Davidson on the break, who then assisted back to Ainsworth for a 3-pointer. Cottage Grove answered with a 3 of its own before Ainsworth found Davidson again in the corner for, yet another, 3-pointer. In the first 2 ½ minutes of the quarter Davidson drained three 3-pointers and he went four-of-five in the quarter from deep.

“He can shoot. He can totally shoot. People think he is just a post on the block. He’s always been a guard,” said Ainsworth of his running mate. “It was kind of just like a rhythm. I see him hit one and then I hit one. Kind of playing off each other and it feels really good to knock down shots.”

Getting shots through the offense, Davidson and Ainsworth looked unstoppable as they propelled the Pirates to a 17-5 run to start the second half and put the game out of reach.

“I was really pleased with the second half, the way we came out in the third quarter. A little more intensity and our transition offense worked pretty well and we shared the ball better and we played better defense,” said Marshfield head coach Marty Stallard.

“When we share the ball and run things we’re pretty darn good, we’re tough to beat. But when we go one-on-one and stop running things and aren’t pushing the ball, it’s going to be tough.”

With more of the latter than the former throughout the first half, Marshfield received a boost from Noah Niblett, who had a team-high nine first half points. Cottage Grove’s Jayden Cameron and Zach Anlauf continued to cut through the Marshfield defense and helped the Lions to an early 12-8 lead.

“We came out flat in the first quarter. We were walking around not ready to go, not focused,” said Stallard. “We didn’t make shots, we walked the ball down the floor and we didn’t play defense. We weren’t focused and we weren’t getting the right rotations and matchups.”

A bucket from Davidson put the Pirates up 13-12 before Ainsworth ended an early 0-for-five shooting start by going three-of-four in the second quarter.

With the bench emptying out in the fourth quarter, the Pirates continued to hit shots as Monty Swinson and DJ Daugherty both hit 3-pointers. The Pirates hit nine-of-11 3-pointers in the second half and were 11-of-17 for the game.

Cottage Grove’s Cameron finished with a team-high 16 points while Anlauf had 11 and Landon Colburn 10.

It was the most fundamental aspect of basketball on display Tuesday night: the other team can’t score if they don’t have the ball.