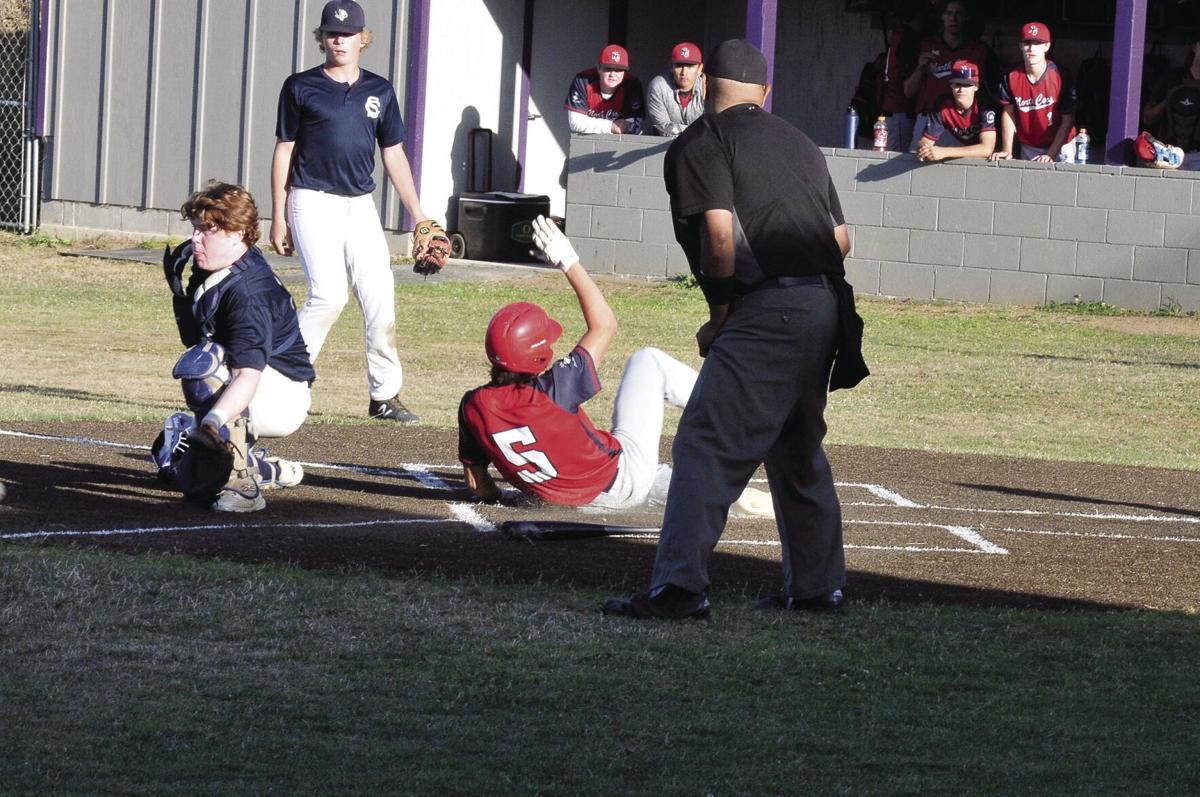 Cooper Peters slides home for North Coos as South Coos catcher Henry Rankin waits for the throw on a single by Ian Sissell in the fifth inning of Thursday’s nightcap at Marshfield High School. 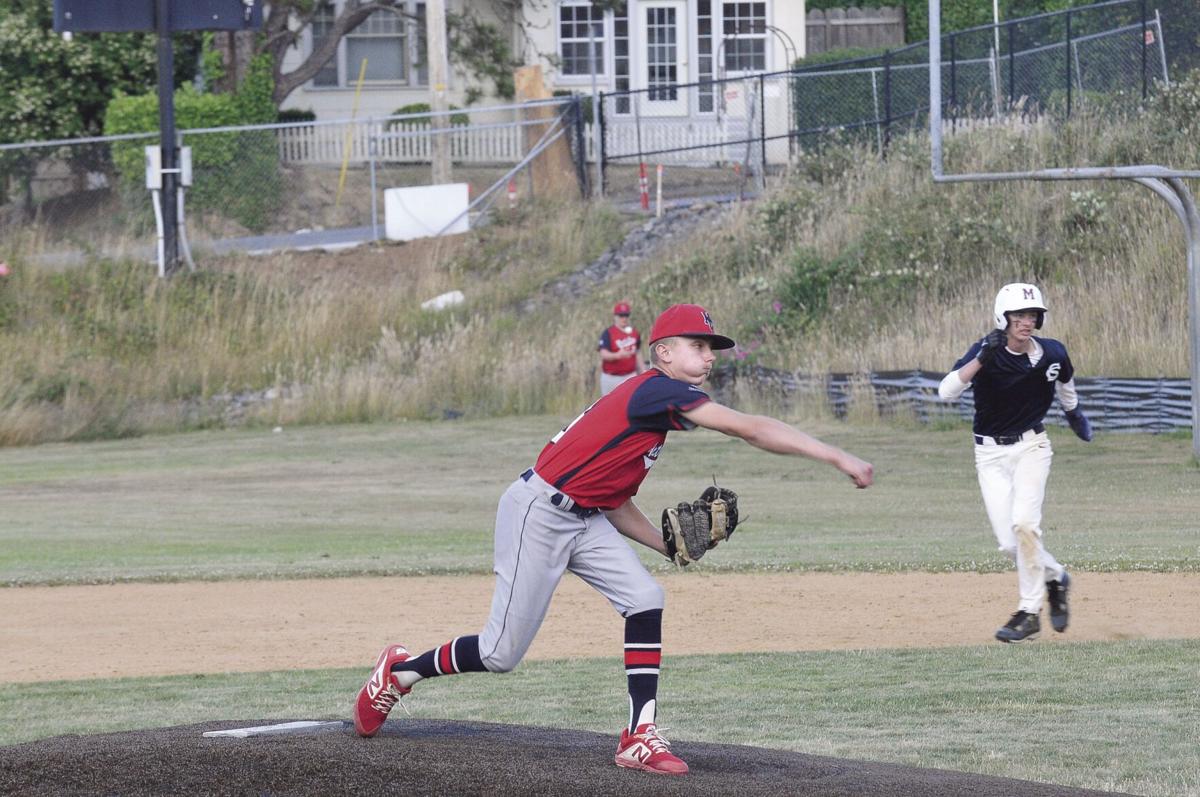 Knoll Gederos follows through on a pitch for North Coos against South Coos on Thursday.

Cooper Peters slides home for North Coos as South Coos catcher Henry Rankin waits for the throw on a single by Ian Sissell in the fifth inning of Thursday’s nightcap at Marshfield High School.

Knoll Gederos follows through on a pitch for North Coos against South Coos on Thursday.

In the eyes of North Coos coach Brad Horning, both his squad and their neighbor South Coos learned valuable lessons about the team nature of the game during the opener of their doubleheader Thursday at Marshfield High School.

“I think they learned the first game, you keep coming at it and good things can happen,” Horning said of the Nooks’ 13-9 win in the opener, a game North Coos had led 7-2 until an explosion of runs in the fifth and sixth innings by South Coos. “We learned the first game there is no clock (in baseball). You need to keep getting outs, or at least pad the lead.”

North Coos turned the tables in the nightcap, with the Waterfront winning 9-3 by holding South Coos scoreless over the final four innings.

North Coos turned to a pair of younger pitchers in the second game, Jake Newsum and Knoll Gederos.

“Jake scrapped to keep (the score) where it was,” Horning said. “That gave us a chance to get the lead.”

Gederos came in with the bases loaded and two outs and North Coos trailing 3-1 in the fourth inning and got Wyatt Peck to ground out to second. He then retired nine of the final 10 South Coos batters as North Coos rallied for the win.

“He’s throwing great there,” said Horning, who didn’t get a chance to see Gederos pitch much during the high school season, since his pitching came with North Bend’s junior varsity team.

It took five tries, but the Waterfront finally beat the Nooks after South Coos had won all four earlier meetings this year.

“It was fun,” Gederos said. “I think we needed to do better defensively in the first game. The second game, we got some good hits, played good defensively and our pitchers threw a lot of strikes.”

Gederos had a sacrifice fly in the first inning and singled and scored one of five North Coos runs in the fifth inning as the Waterfront took the lead for good in the second game.

Cooper Peters and Ian Sissell had RBI singles and scored in the big inning, when North Coos did a lot right. Carter Brock opened with a single, Sam Mickelson walked and Beau Ericson hit a sacrifice bunt. Jack Burgmeier provided a key run when he hit a sacrifice fly to center in a long at-bat that included fouling off four straight two-strike pitches and was rewarded by extensive congratulations from his teammates when he returned to the dugout.

Peck had an RBI single in the first inning for South Coos and singled and came home, along with Luke Parry, on a two-run single by Landon Croff in the third.

Peck was a little disappointed in the nightcap, especially given the successful season for South Coos, which has included just four losses.

“The season has been going pretty good,” he said. “Today wasn’t good. We had a lot of errors.”

It was North Coos errors and timely hitting by the Nooks that enabled South Coos to rally for the win in the opener.

Starting with one out in the fifth inning, Cobin Bouska, Croff and Henry Rankin had consecutive singles for South Coos, though Croff was thrown out attempting to steal second by Brock. Dean Tucker, Joseph Herbert and Drake Rogers then walked. Jonathan Calvert added a double.

The five runs South Coos scored in that inning were followed by six more in the sixth. Rankin had a one-out single and Herbert singled with two outs. Rogers and Calvert both reached by errors and Parry provided the big blow, a three-run home run.

Bouska later added an RBI double to score Peck, who had reached by walk.

Though both teams have players from several schools, the day felt much like a North Bend-Marshfield rivalry game.

“I’m glad we split with North Coos,” said Peck, who will be a senior for the Pirates next year. “Taking four out of five makes me happy.”

He has seen South Coos develop from a program that won just a few games its first summer season a few years back to one that has had a strong summer this year.

“We went from an all right team to a pretty good team,” he said, adding that he is excited about Marshfield’s potential next spring. “I’m hoping we will at least take league next year,” he said.

South Coos also includes Colton Siewell and Daniel Cabrera from Bandon. Tucker is from Coquille and Rankin from Siuslaw.

While most of the North Coos roster is from North Bend, Chaney and JB Noel are from Reedsport, Peters is from Elkton and Ericson, Sissell and Garcia all are from Siuslaw.

The multi-school aspect has made the season fun, Gederos said.

“Playing with this group of kids enabled us to get better defensively and offensively,” he said. “We can take that back to our high school teams next year.”

Horning agreed the players can learn from each other.

“You’ve got to love the enthusiasm of Sissell and Garcia,” he said. “They are always cheering for everybody.”

Horning and South Coos coach Chilly Peck said they both are excited about the summer and how it has helped the players from all the schools.

“Summer ball is a great time to work on one’s craft of the game as well as working to become a better team player,” Peck said. “We have had a few players play many positions. We’re trying to push a few players’ comfort level as they may need to become that utility player. It’s also a good time for some of the younger players to feel comfortable with the older players.”

North Coos finishes the season with a doubleheader at Brookings on Saturday, while South Coos has three more twin bills, all on the road against Dr. Randol’s in Roseburg on Monday, Newport on Wednesday and Roseburg Pepsi next Saturday.