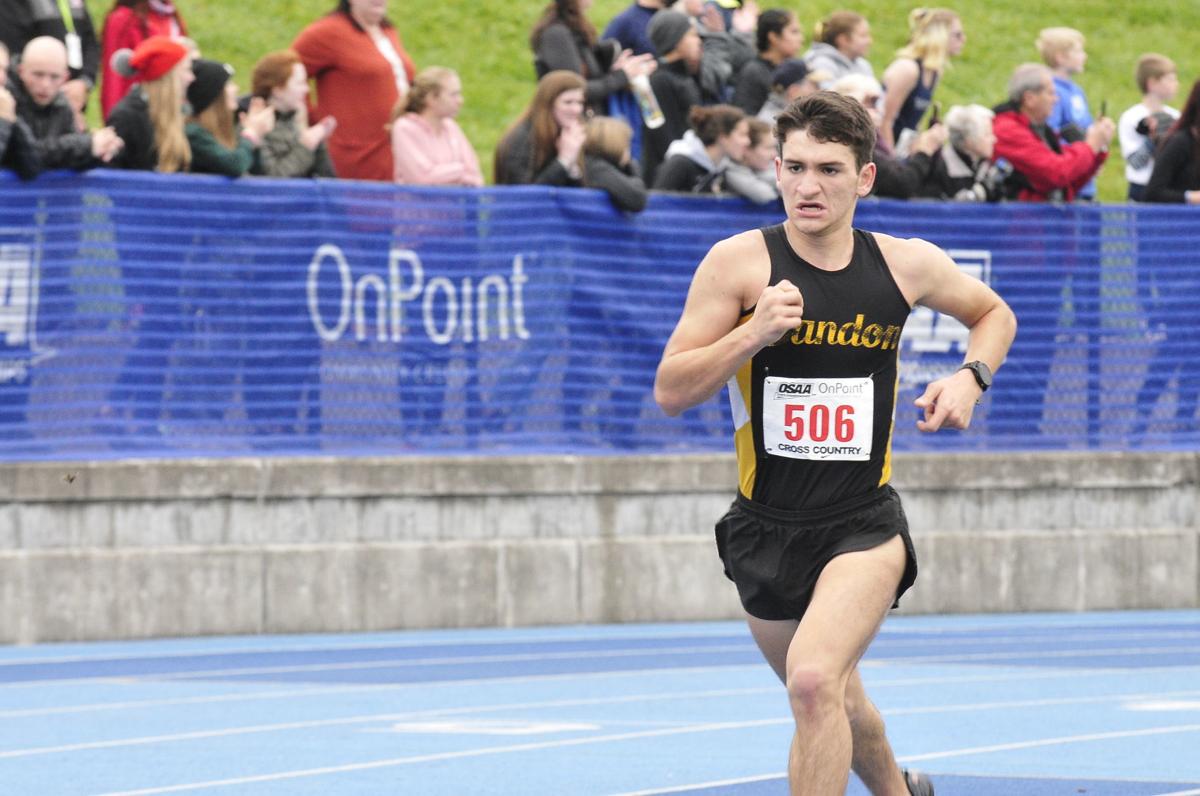 Bandon's Aero Franklin sprints to the finish on the track during Saturday's state cross country meet. Franklin helped the Tigers to third in the team race. 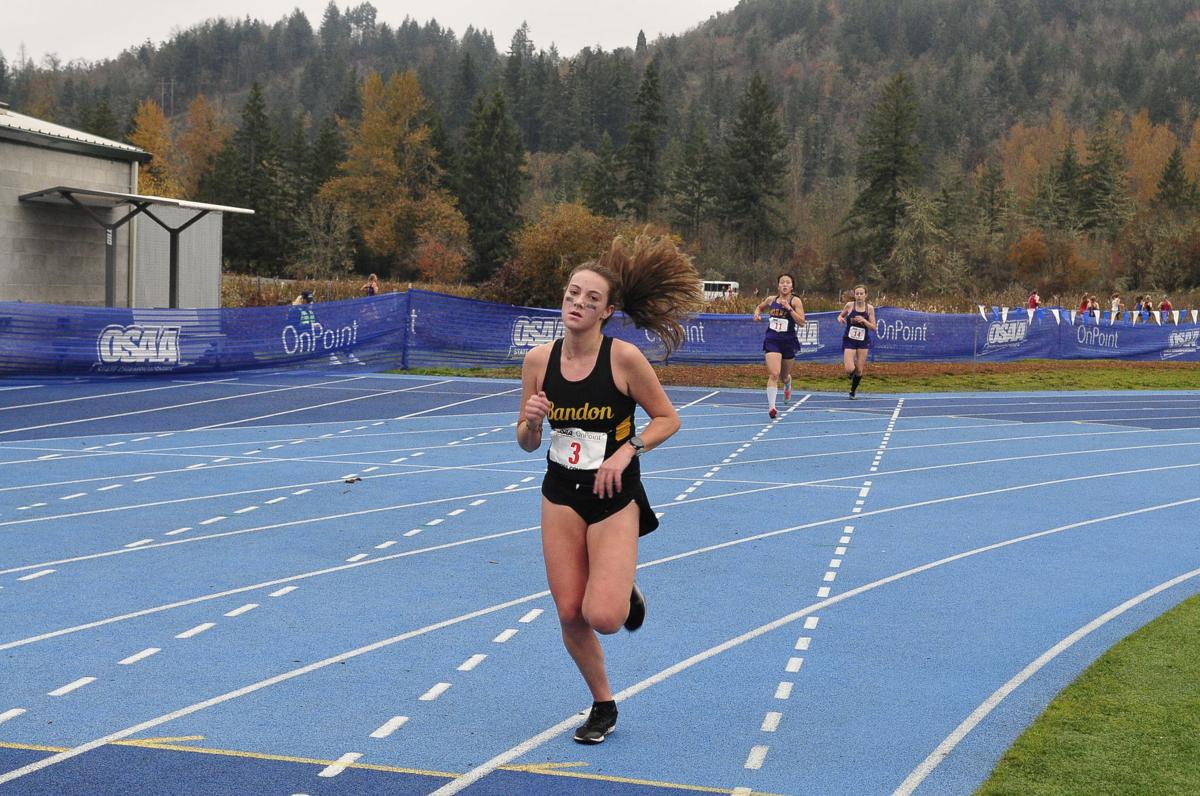 Holly Hutton on the track near the finish of the Class 3A-2A-1A state cross country meet Saturday. Hutton led the Tigers to fourth place in the team race.

EUGENE — All season, the Bandon cross country teams have been working on their ABCs.

“We talked about ABC — always be closing,” said Bandon head coach Brent Hutton. “Always catch someone. Even if it takes half a mile to catch someone, always closing. Even if someone passes you, as long as you keep your goal to close … And that’s what they did today.”

Holly Hutton on the track near the finish of the Class 3A-2A-1A state cross country meet Saturday. Hutton led the Tigers to fourth place in th…

The Tigers were able to successfully close each race on Saturday at the OSAA State Cross Country Championship at Lane Community College as the boys took third place in the Class 2A-1A division and the girls finished fourth in Class 3A-2A-1A.

With the Bandon boys’ top four runners on the day — seniors Isaac Cutler, Aero Franklin and sophomore Charlie Ells and freshman Patton Clark — all turning in personal best times, the Tigers were able to finish with 95 points in the 1A/2A race. St. Stephen’s Academy was first with 42 points and the combined Union/Cove team second with 89 points.

“I’d be disappointed if they had an average day, but the day we had to get third, you just have to tip your hat to Union and St. Stephen’s,” said Hutton. “They were just a better team today. And having said that, even when we were the best we’ve ever been.”

Cutler, who was hoping for a top-10 performance to finish on the podium, went out fast from the start recording a 5 minute first mile. He finished the day with miles splits of 5:22 and 5:20 but it was the first mile that propelled him to a 21 second personal record time of 16:27.

“I knew if I let (the top group of runners) go, then I wouldn’t have enough stamina to catch them. So I was like, you know what, I’m going to go with them. And it paid off,” said Cutler. “I felt really good but I could tell that Brent was scared. But I felt tremendous. I mean, it worked out. I could have blown up but I didn’t so I’m happy.”

Coming in second for the Tigers, as he has all season, was Franklin who recorded a three second PR in the race by finishing in 17:14.

But for Bandon, the big performance of the day came from the sophomore Ells, who entered the day with the seventh fastest time on the team but had put together a sixth place finish at last week’s district meet — third overall for the team.

“It’s an awesome close to the season. We owed it to our top two who have worked super hard over the last years and really helped our team just be better and elevate the program to the next level,” said Ells.

St. Stephen’s Academy had three of the top five finishers, led by individual champion Seth Bergeron, who finished in 15:50.

While the Bandon boys eyed a trophy at the state meet all season, it was a different route to Eugene for the girls.

“Originally in the season (the goal) was to make it to state and as it got closer we thought, well, it’s possible,” said Hutton. “We came in and actually, it was from the bottom up, four, five really pulled us through. It was truly a team effort which was really cool.”

After finishing second to Lakeview at the district meet, the Tigers defeated the Honkers by six points on Saturday on the way to a fourth place finish in the 3A-2A-1A race. Catlin Gabel beat the Tigers by one point to finish in third. Burns easily won with 43 points, while Union had 110, Catlin Gabel 121 and Bandon 122.

“It’s kind of cool that we were just one point away from third, I never thought that would happen. I’m really proud of my team, especially our girls that PRed today. They really showed up like they were supposed to,” said Bandon’s top runner, sophomore Holly Hutton.

Hutton, who used a strong kick to make up ground and speed past Yahmill-Carlton’s Cristin Brethower in the final 100 meters, finished 12th overall with a time of 20:05. Bandon senior Shannon Smith and freshman Danielle McLain ran together to finish 20th (20:37) and 21st (20:46) overall.

After the first mile the Tigers sat in sixth place in the team race but continued to put together quick splits across the board to move up and take home the fourth place trophy.

“Awesome. You’ve got to be happy with the results at that point. They’ve done everything they could to put it out there,” said Brent Hutton.

Lila Fenner of Catlin Gabel won the race in 18:49.

In the 4A boys race Marshfield senior Aaron Prince, racing as an individual, finished in 14th place (16:23).

“Time wise, I am happy I PRed. But place, you know, I was hoping for a spot on the podium but things happen,” he said.

It was an especially competitive field; a season ago Prince ran 32 seconds slower but finished three spots higher.

Throughout the race Prince was locked in a large group of runners. After the first mile, over 20 runners were within three seconds of each other. Constantly battling his way through this pack, he tried to use it to his advantage.

“When you’re in the middle of the pack you can kind of coast because there are people in front of you, people behind you and you can kind of just sit there,” said Prince. “But when you’re at the back of that pack it’s trying to hold on to the end of the rope in tug-of-war.”

As it turned out, Prince was only six seconds behind the sixth-place finisher, Sky-Em League district champion Wiley Watts of Marist Catholic, and also only six seconds ahead of the runner who finished 20th — 15 runners crossing the line in a span of 12 seconds.

In the team race, the Siuslaw boys were hoping to rise to the top of the fast field but, ultimately, finished in sixth.

“I think the boys felt like we could win. We knew we had our work cut out for us because there were six really good teams in my estimation,” said Siuslaw head coach Chris Johnson

Leading the way for the Vikings was Brendon Jenson who took fifth place in a time of 16:14.

“He ran a great race. That’s how we’re supposed to run, he stayed hungry and ran a great second half of the race,” said Johnson. “We didn’t have four other guys do that. It’s disappointing but that’s life. Sports are disappointing sometimes.”

Philomath won the title with 65 points, beating Sisters by five. John Peckham of Sisters was the individual winner in 15:48.

Ten-days after topping Marist at the district meet by one point, the Siuslaw girls were hoping for a repeat performance on Saturday. But instead it was Marist taking first with 50 points while the Vikings were second with 71.

“You have tip your hat to a team that came ready to run as well as they did. I think last week we snuck up on them and beat them by a point. It’s kind of like shooting a bear with a .22, we just made them mad,” said Johnson. The Spartans had four runners in the top-14, led by sisters Lucy and Jennifer Tsai in fourth and fifth.

In the 5A boys race — that saw the fastest time in Oregon history with Evan Holland of Ashland recording a 14:30 — North Bend freshman Alex Garcia-Silver raced his way to 12th place in a personal best time of 16:08.

“I was definitely going too fast and I could definitely feel it in my legs,” said Garcia-Silver of his first mile that saw him come through at 5:03. As he looked to hang with one of the top groups, he fought his way to maintain contact and came up with a kick on the track to move from 13th to 12th.

“I don’t even know how I was able to finish that last sprint. I was just like, okay, I’m not going to get passed. I never like getting passed,” he said.

Ashland had four of the top five finishers and scored 41 points to easily beat Midwestern League rival Crater, which had 81. Seven of the 11 runners who beat Garcia were from those two schools.

The team race in the division was the best of the day, with winner Corvallis (67 points) and fourth place North Salem (74) separated by just seven points. Hood River Valley had 71 and Wilsonville 73, and those four schools combined to have eight of the top 10 finishers, led by individual champion Madeline Nason of Corvallis (17:51).

In the 3A boys race, Brookings-Harbor finished 9th place as a team. Kaleb Barnes was 22nd in a time of 17:25. The powerful combined team of Enterprise/Joseph/Wallowa won the title with 35 points, edging Burns by three. They each had three of the top eight finishers, including individual champion Henry Coughlan of Enterprise (15:58).

In Class 6A, the nation’s top girls team, Summit, added to its string of state titles with 41 points, led by individual champion Fiona Max and her state-record time of 16:51. The storm’s sixth runner finished 17th and their seventh was 22nd.

Franklin had the top two boys finishers — Aidan Palmer (15:04) and Charlie Robertson (15:06) and won the boys title with 62 points, nearly 40 better than Jesuit.