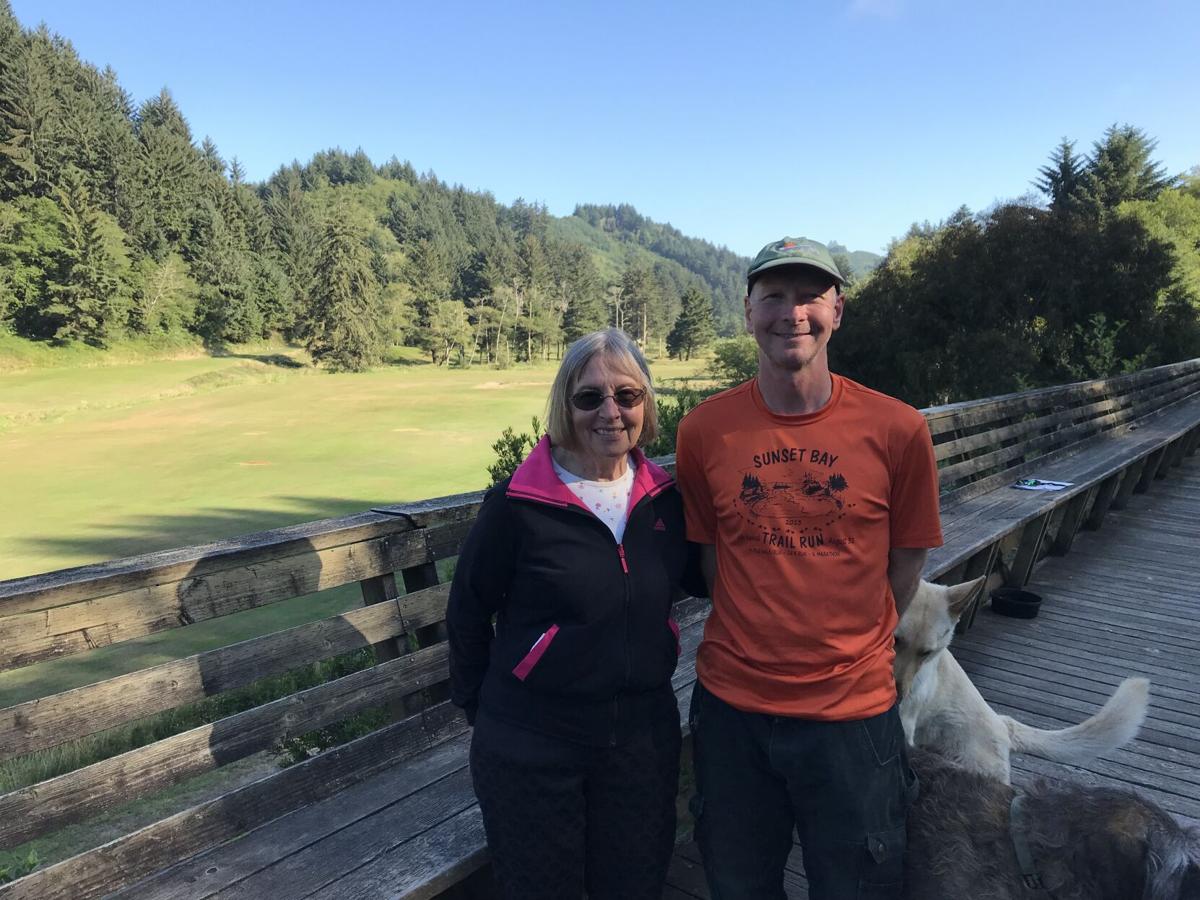 Rosalie Hyatt and her son Tim stand on the clubhouse deck overlooking the first fairway Sunset Bay Golf Course. The family has owned the golf course near Charleston since 1981. 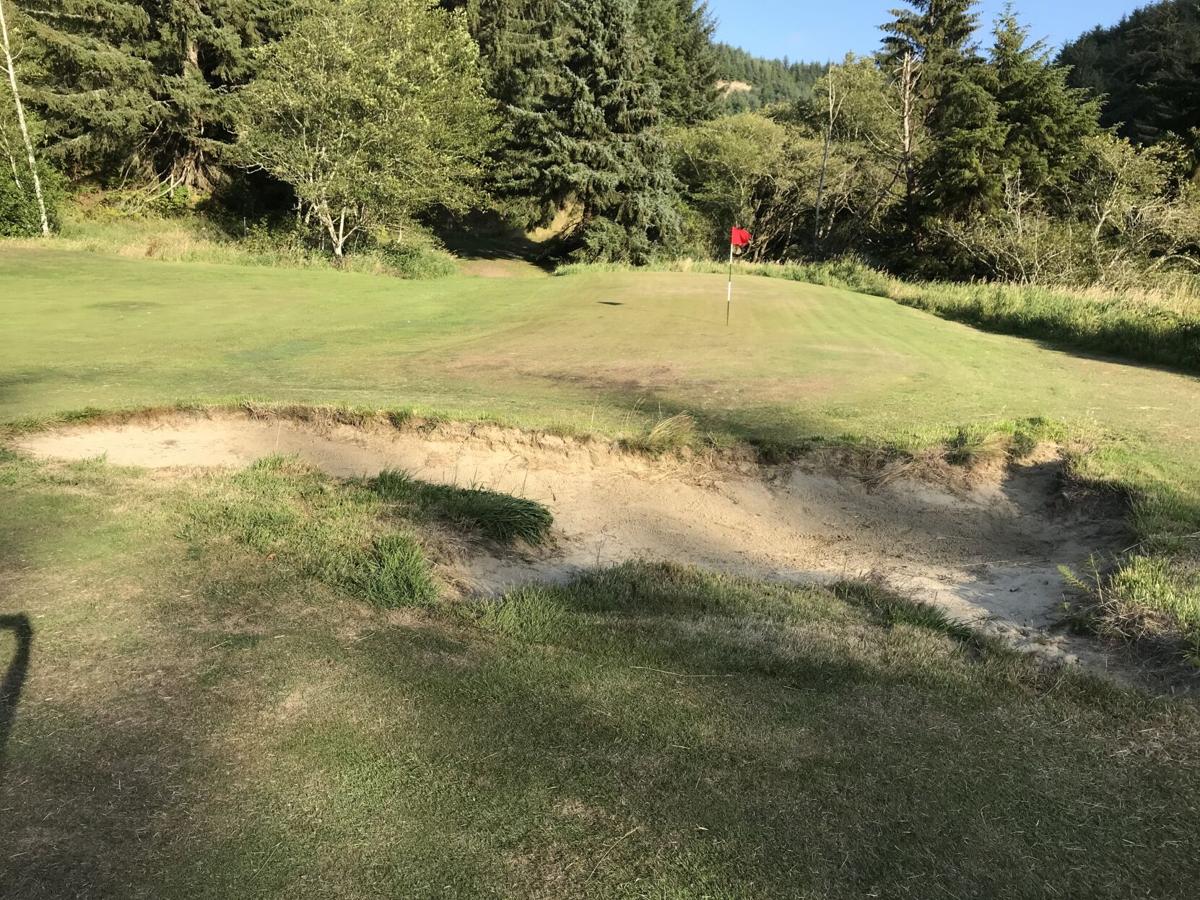 The bunker Dead Horse Trap sits in front of the green on the new fifth hole at Sunset Bay Golf Course. The bunker is shaped somewhat like a horse.

Rosalie Hyatt and her son Tim stand on the clubhouse deck overlooking the first fairway Sunset Bay Golf Course. The family has owned the golf course near Charleston since 1981.

The bunker Dead Horse Trap sits in front of the green on the new fifth hole at Sunset Bay Golf Course. The bunker is shaped somewhat like a horse.

The course has aged well, for nearly four decades now under the ownership of the Hyatt family, who have always had the same goal for the course.

“Our theme out here is to enjoy a relaxed game of golf,” said Tim Hyatt, who spent most of his growing years at the course, which his parents Larry and Rosalie purchased in 1981.

A lot of people bring their children with them. It’s not uncommon for golfers to bring along their pet dogs.

The constant question for the Hyatt family: “How can we provide a fun atmosphere for people?” Tim said.

And though it wasn’t planned as part of the 50th anniversary of the course, Sunset Bay has started providing a more fun atmosphere, to the tune of three more holes.

What had been a nine-hole course since its opening now has 12 holes, though golfers can still choose to just play the original nine if they prefer.

“It ended up being a bit of an accident,” he said.

At the far end of the course next to what had been the fifth hole, he started mowing an area for a practice area for his two sons and other youths at the course.

“We cleaned things up and understood the potential out there,” he said.

Sunset Bay was designed by John Zoller, who also designed the famous Monterey Peninsula courses Cypress Point and Spyglass Hill in California. Zoller designed an 18-hole layout, but the original owners only built nine of the holes.

As it turned out, what have become the fifth and sixth holes — both par-4 holes — fit right in with Zoller’s original layout, Tim said.

That wasn’t the case for the other new hole, a short par-3 that is now the 10th hole, playing toward the forest from below what formerly was the seventh green.

”By clearing things out, we found that golf hole,” Tim said.

But it, too, fit in with the style of Sunset Bay, with a ditch in front of the green and a forest in back providing defense on a hole that is only about 100 yards from the longest tees.

“We saw the ability to make at tricky hole,” Tim said. “It fits within the current footprint of the golf course.”

People too often get caught with a certain frame of mind, in this case that golf courses should be nine or 18 holes.

“I think we’re all guilty of thinking in boxes,” Tim said.

But, he pointed out, the par-3 Bandon Preserve course at Bandon Dunes Golf Resort has 13 holes and one of the original courses in Scotland has 12 holes, as do several other courses in the United States.

“There is some precedent to it,” he said.

“Eighteen holes can be a bit too much for some people, especially if you have kids with you,” Tim said. “Nine holes leaves you wanting a little more.”

A side benefit is that as it becomes more widely known — the 12-hole layout was unveiled in a soft opening during the winter and now the scorecards and website have been updated with the new layout — is that Sunset Bay will be known as more than just a small nine-hole course near the ocean.

To the family and golfers who have come to love the course, it’s never been just a nine-hole course.

With Big Creek in play on almost every hole as it weaves its way through the center of the valley where the course sits, and forested hillsides framing the holes, it’s never been an overly easy course.

The course was originally built with 23 sand traps, though they had been allowed to grow over by the time the Hyatt family took over the course, which Tim described as being in pretty bad shape.

Larry Hyatt, who died in 2008, worked to restore it, getting it back into good playing shape and “putting it back on the map,” Tim said.

“My dad wasn’t a great golfer, but he loved to get out there and work on the tractor,” he said.

And after moving back into the area, Tim added sand traps back in about 15 years ago, following Zoller’s original plans.

He dug them all out by hand and found the original sand still underneath the grass.

Tim added sand traps to the new holes, too, including one particularly unique one in front of the narrow and sloped fifth green.

“There’s a dead horse buried under that trap,” Tim said, referring to an animal the family owned that was buried in that spot years ago.

“There was already a big depression.”

He tried to shape the bunker like a horse, with a head, body, legs and a tail, and gave it the name “dead horse trap.”

Lots of golfers have had a chance to experience the new holes. Like other golf courses, Sunset Bay has enjoyed a lot of business during the coronavirus pandemic as people try to get outside to exercise with the sport that lends itself to social distancing.

That goes with the area residents who are regulars at the golf course and the annual visitors the course sees camping at nearby Sunset Bay State Park.

Hyatt, the president of the Charleston Merchants’ Association, said the golf course, campground and businesses in the Charleston marina support each other.

While some golfers bring their children with them, the families of others will visit Shore Acres or the other state parks while they golf.

The people who make their way to the golf course will find a family friendly atmosphere because since the Hyatt’s took over the course, it’s been all about family.

Rosalie said she didn’t imagine back in 1981 that she would still be sitting on the deck chatting with golfers in pleasant late-afternoon conditions nearly 40 years later — something she often does now.

“I didn’t think that far ahead,” she said. “I was a busy mom with four children.”

The kids — Tim, Andy, Julene and Elisabeth — would eat lunch with her in the clubhouse and, as they got older, take an active role working at the course.

“They learned about working hard (from Larry),” Rosalie said.

“Julene grew up mowing fairways and now she’s a nurse at the hospital.

Tim and Andy also learned to operate the equipment and do other tasks at the course.

Now Tim is passing the same traits on to his two sons, Derrick and Lucas.

“It’s been a family effort,” Tim said. “We’ve had some great employees who helped, too.”

True to Sunset Bay’s casual atmosphere, people don’t need to reserve tee times, though they are asked to call ahead if they have big groups.

The course does offer memberships and punch cards, in addition to the option of people paying the regular greens fees each round.