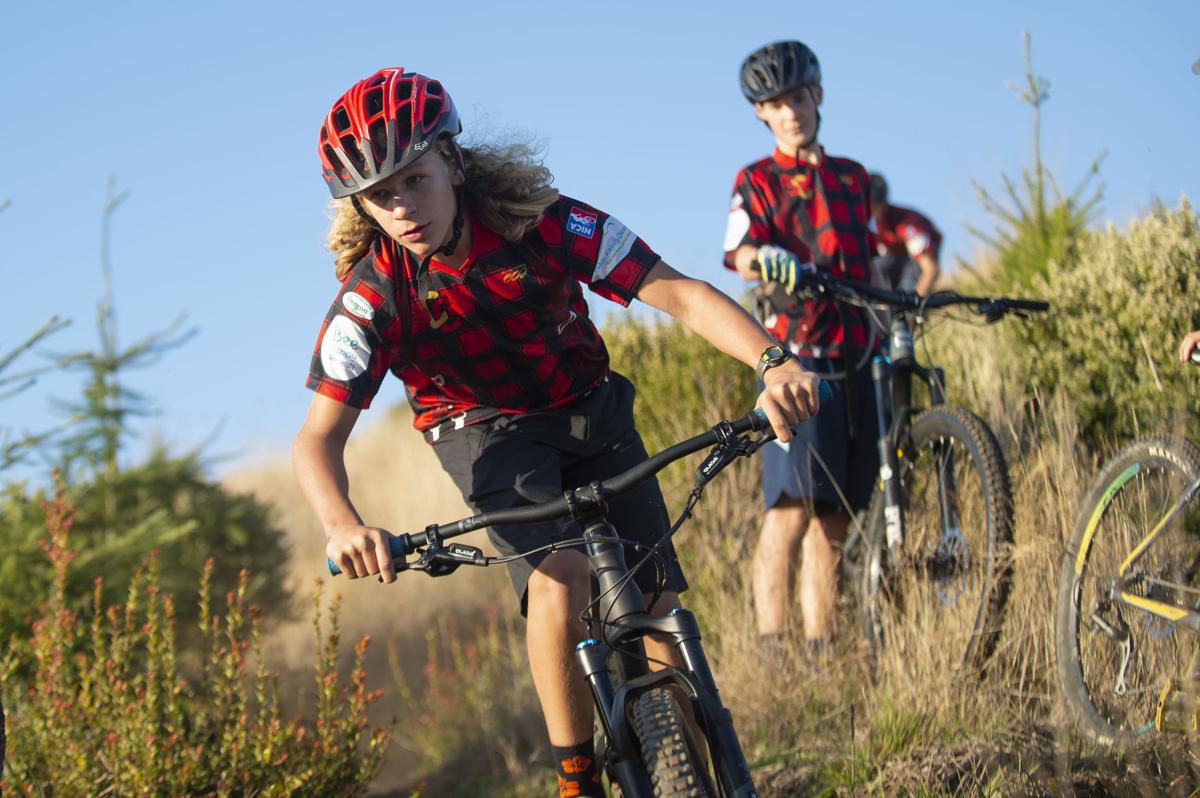 Jacob Randle takes off down a trail Oct. 10 as he rides with others in the newly formed South Coast Composite Mountain Biking team near Whiskey Run. 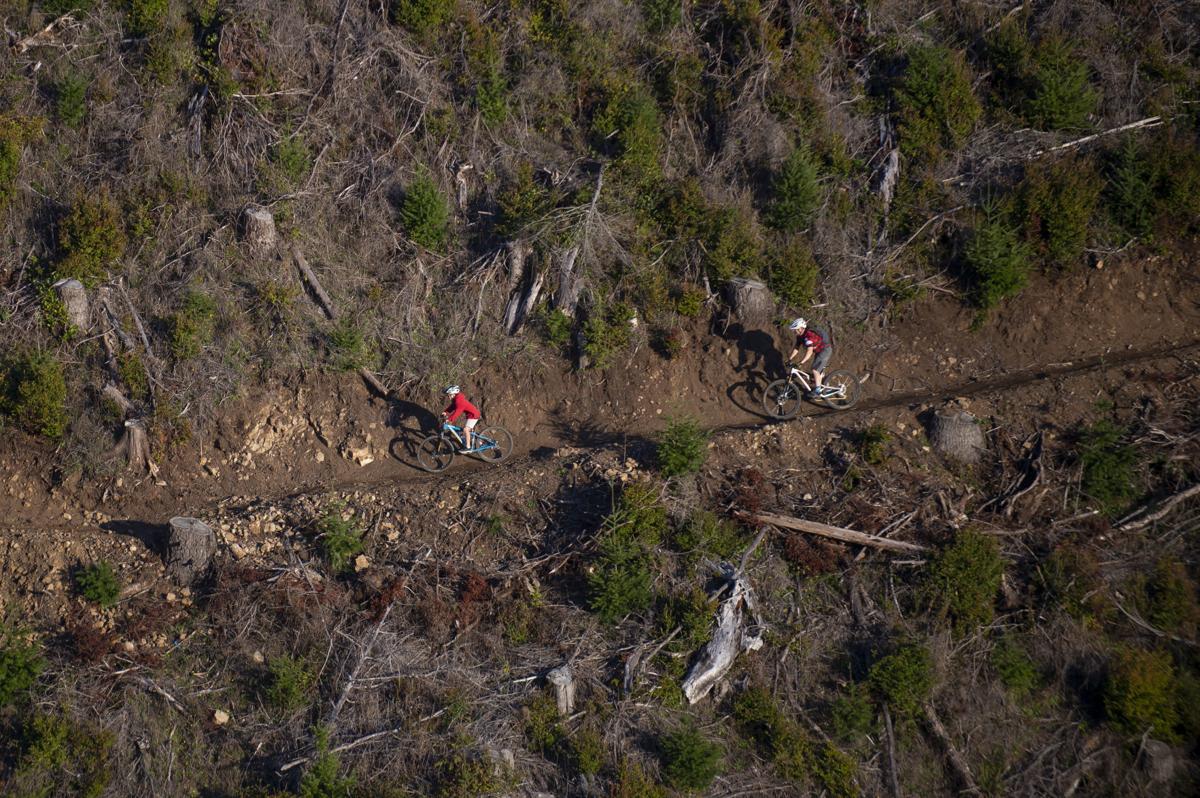 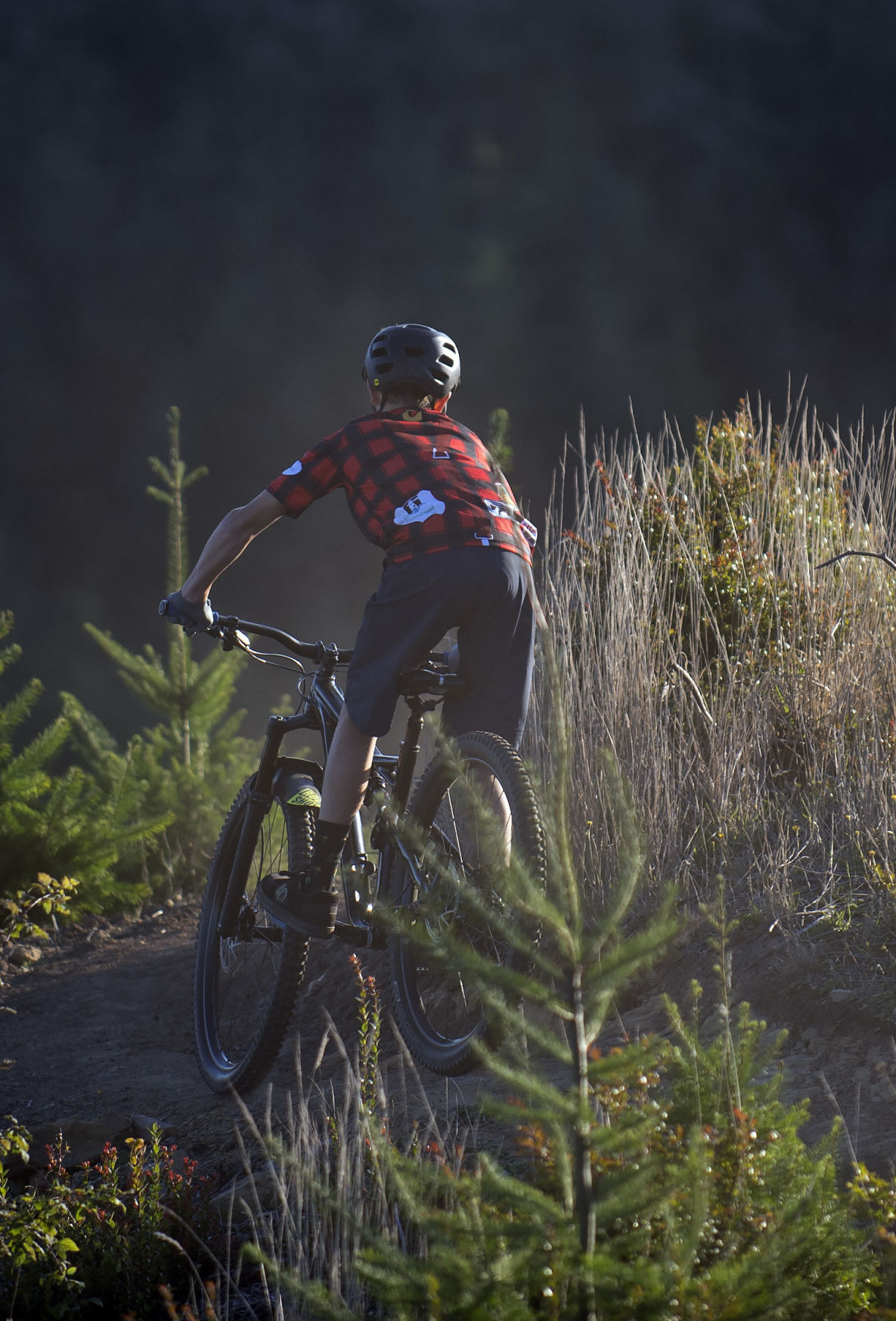 A biker on the South Coast Composite Mountain Biking team nears a drop off on a trail. 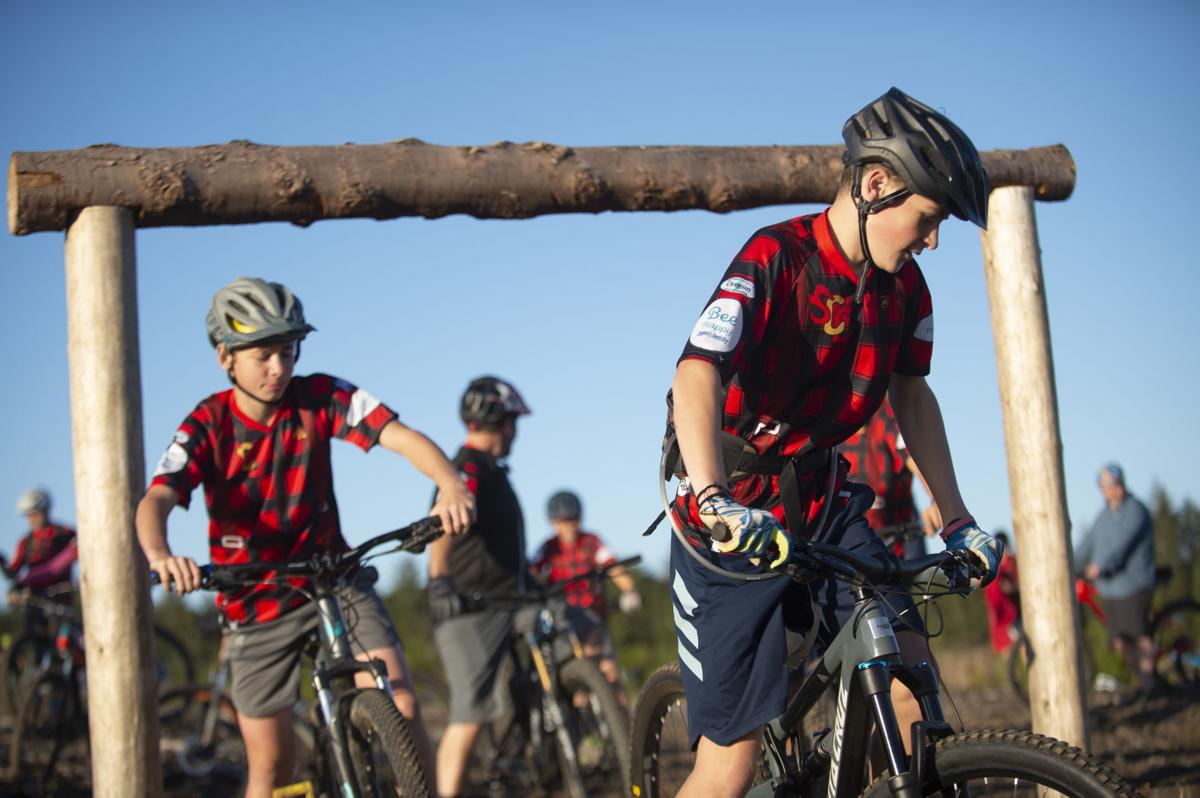 Bikers with the South Coast Composite Mountain Biking team prepare for a group ride on trails at Whiskey Run.

Jacob Randle takes off down a trail Oct. 10 as he rides with others in the newly formed South Coast Composite Mountain Biking team near Whiskey Run.

A biker on the South Coast Composite Mountain Biking team nears a drop off on a trail.

Bikers with the South Coast Composite Mountain Biking team prepare for a group ride on trails at Whiskey Run.

Eli Meservey wasn’t interested in bikes, isn’t inclined to be outside and doesn’t care for competition. And yet with this unlikely combination, Meservey, an eighth grader at North Bend Middle School, found his way onto the inaugural South Coast Composite Mountain Biking team.

“Um. I guess my mom just kind of forced me,” Meservey explained. “I was more like, I don’t really want to do this because I’d rather be inside playing Minecraft and stuff like that. But it’s really fun.”

With riders of varied interest and skill being paired with an excited coaching staff, the South Coast team has brought together 29 middle and high school riders from up and down the coast to compete as one of 14 teams from around the state.

“I almost liken it to Chile,” said Neil Jensen, the team director on where the team comes from. “We’re long and skinny, kind of. It is essentially what would be Coos County to Port Orford and northern Curry County.”

While this far-reaching region can cause logistical challenges that may make the team’s two practices a week difficult, the area was created as a response to far-reaching interest in the sport of mountain biking. While the sport is by no means new, renewed interest around the state has helped elevate this hobby into an organized sport.

With the sport growing on a national and state level, the same was true locally. With local riders flocking to the Whiskey Run Mountain Biking Trail, Jensen believed it was time for a youth team.

“It just seemed like I’ve been meeting more and more locals riding and a lot of local families,” said Jensen, who also rides with his family that includes twin 8-year olds, a 4-year old and a 3-year old. “That’s the beauty of that trail system out there is that it’s for all levels. You go faster to make it more difficult.”

The idea for the team was hatched at a local mountain bike meeting when Jensen was chatting with other local riders including the team’s head coach, David Hernandez.

“I just knew at some point somebody was going to get something going and I was going to be a part of it,” said Hernandez, who has been mountain biking for the past 20 years and was prepared to take on this position. “With my history here in the county and with me being a teacher, I just kind of thought, yes, if (a team) happens, it’s going to be me.”

The team kicked off in the spring of this year with practice starting during the summer. With coaches in place, the important next step was finding interested students. Through morning announcements, flyers at schools across Coos County, posts on social media and word of mouth, interested participants — and parents interested in having their students participate — began to inquire and the team’s roster started to fill out.

For Jensen and Hernandez, they were willing and excited to work with students of all skill levels.

“My goal has been to get kids on bikes and particularly aiming at kids that spend way too much time on a couch or a bed playing video games and don’t get outside enough,” said Hernandez.

“We have kids who were never really on a bike before. And then by the end now, they’re actually able to ride the trail and have fun and not be scared,” added Jensen.

Through the near completion of one season, the new riders have continued to grow as some of the riders who entered the year with experience are improving.

Falling in the latter group is North Bend freshman Jacob Randle. Randle, who grew up riding mountain bikes, got more seriously into the sport a year ago as the new trails were made. Interested in the sport, Randle then helped recruit his classmates who joined the squad.

“It’s really neat to see everyone improve as a team. And you kind of get here, I kind of got my friends into it so I get to do this with my friends and it’s kind of a cool way to get out and do something that I love,” he said.

Randle leads a successful group of freshman boys who are highly ranked in their division after the first three races on the season. Randle is in fourth place while Knoll Gederos is in fifth and Cooper Davis eighth.

Pahls, who is from Bandon, started mountain biking about a year ago with her family. But it was not love at first ride as she had to be pushed to join the team.

“Actually, truth be told, my parents wanted me to do it. I didn’t want to do it at all. And so anyway, I got into it and I’ve met lots of great people. We have some amazing coaches and it’s been really fun,” said the exceptionally well-spoken 12-year-old.

One of just a handful of girls on the team, Pahls is hoping to get more girls out on the team but, just as her coaches and teammates echoed, she really just wants to see more people out biking and enjoying the sport that she has come to love.

“Even when I tell my friends, ‘yeah, I do mountain biking’ when they say what sport are you doing they are like, uh. And I’m like we actually race and stuff, too,” she said. “They’re like, ‘O.K., whatever.’ Nobody really knows about it yet.”

The Pirates have righted the ship recording four league wins in the five matches. This positive run of play continued on Tuesday night