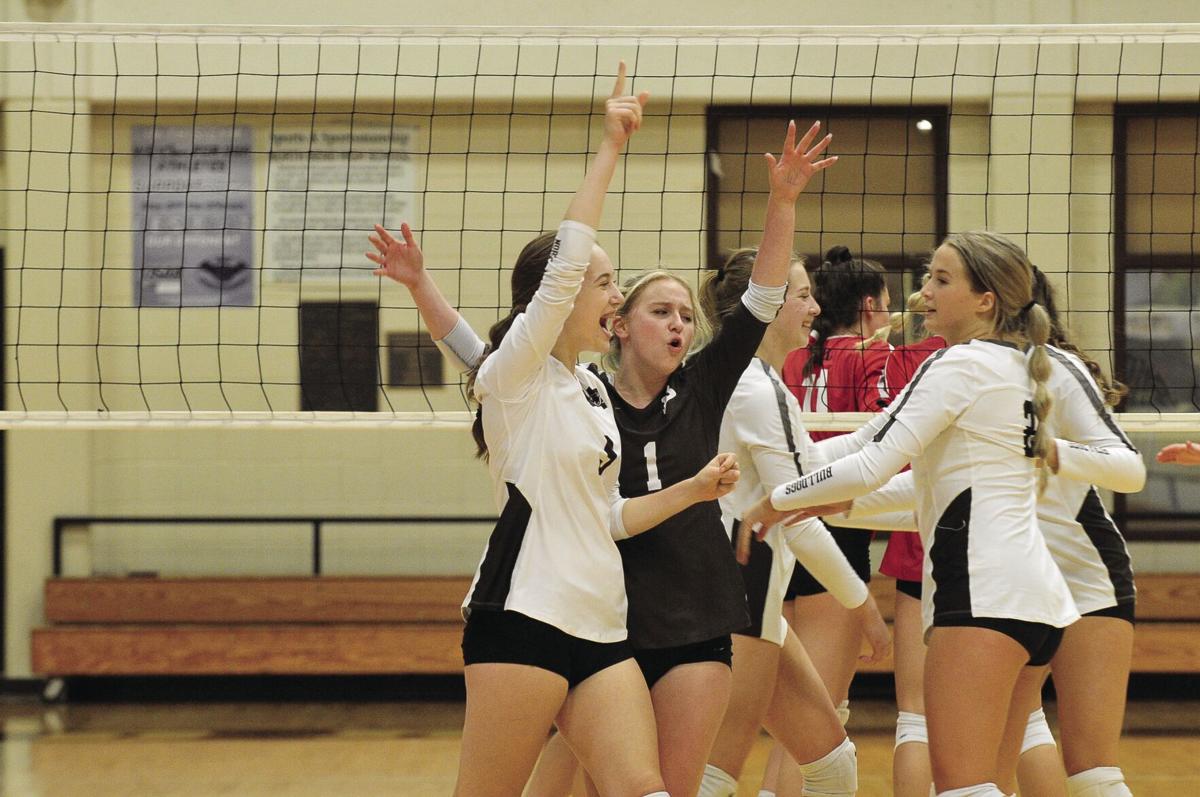 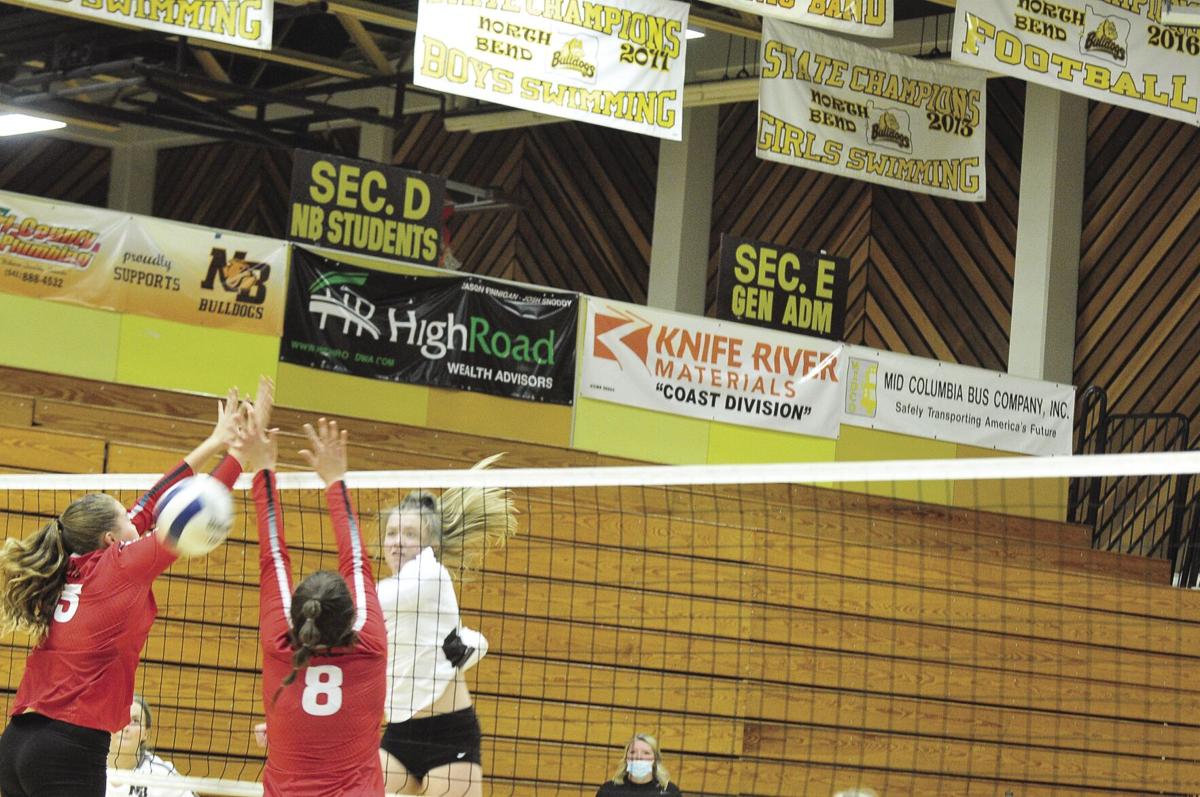 North Bend’s Bridget Gould follows through on a powerful swing as the ball sails past two Thurston defenders for a kill during the third set Tuesday.

North Bend’s Bridget Gould follows through on a powerful swing as the ball sails past two Thurston defenders for a kill during the third set Tuesday.

“Yes,” she simply said about appreciating the lower stress level after the Bulldogs won both their Midwestern League matches (against Crater and Ashland) in five sets and all three bracket matches in Marshfield’s tournament Saturday (against Cottage Grove, South Medford and Siuslaw) in the maximum three sets.

It appeared Tuesday’s match might have the same fate after the Colts won the first set 25-21 and North Bend edged Thurston 29-27 in the second. But the Bulldogs dominated the third set 25-12 and pulled away to win the fourth 25-17.

Sawyer said the Bulldogs struggled the opening set “getting our emotions settled” after pre-match senior-night ceremonies for the team’s eight seniors.

“It took us a while to get into the groove,” Sawyer said. “I knew if we played our game and continued the momentum that we’ve gained the past few weeks, we’d be fine.”

The win was a big one for North Bend, which kept alive the chance of sharing the league title with Churchill. The teams both have one league loss, to each other on their own home courts, entering the final few nights of the regular season — Churchill has one more match and North Bend two (at North Eugene on Thursday (results were not available by press time) and at home against Springfield on Saturday.

North Bend, which has just the single loss to the Lancers all season, was No. 2 in the OSAA rankings for Class 5A following Tuesday’s win, a ranking that would secure the Bulldogs home matches for the first two rounds of the upcoming playoffs, provided they won the first playoff match.

“I’m excited to go play,” North Bend senior Bria Hood said about the postseason. “I’m hoping we go far and play our hearts out like we can.”

After the slow start Tuesday, that was the difference, fellow senior Mya Massey said.

“I think that was the hardest we’ve ever played,” Massey said. “We had the motivation because it was senior night.

“The way no ball hit the floor, you could tell we wanted it.”

Thurston, which held third place in the league standings, took advantage of North Bend being slightly out of sorts the first set, and kept with the Bulldogs throughout the second leading to the tense final points. North Bend had set point at 25-24, 26-25 and 27-26 before finally converting at 28-27 on one of Bridget Gould’s 21 kills on the night.

The set win energized the Bulldogs.

“It was a cloud nine feeling,” Massey said. “We finally had our groove again. We finally got it going with our sets, timing, passes and blocks.”

“It was relief and happiness at the same time, and we knew we could come out with the same momentum (the next set)," Hood added.

The result was the dominant third set and the clinching fourth set that thrilled a big home crowd.

North Bend put all the pieces of the game together after the first set, with Gould and Massey, who had 19 kills, leading the attack up front, with key kills along the way from Hood, Payton Marshall and Emily West.

“We rely a lot on our middles,” Sawyer said of Massey and Gould. “But we’ve been doing a good job spreading (the offense) out.”

Another huge key was the blocking up front by Gould and Massey, who combined for 10 blocks in the match, and their fellow front-row players.

“In order for your defense to be successful, you have to at least be slowing (the ball) down,” Sawyer said of attacks at the net. “I think we did that.”

North Bend also repeatedly dug up balls or scrambled for saves. And when Thurston wasn’t able to put up a good attack, the passing was usually on target to setter Olivia Knutson, who had more than 50 assists.

Though the match didn’t take the full five sets, Massey said North Bend has been thriving in those situations after winning most of the early season matches in sweeps.

“I think we kind of like it now,” she said of matches that go the distance. “It’s so exhilarating. It’s kind of the best feeling.”

On Saturday, that included beating both South Medford and Siuslaw (in the championship match) after losing the first set.

The Marshfield tournament was important for the Bulldogs, both because of their success and because it was their only weekend tournament of the season.

“I think there was a lot of team bonding that happened,” Massey said. “It prepared us for this week.”

North Bend had never won the tournament in previous tries.

“It felt really good to win,” Hood said. “We have a lot of fun at tournaments. It was really good for us to spend all day playing together and having fun.”

The win over Thurston provided more of the same kind of fun.

“It’s so fun to be part of this team,” Massey said.