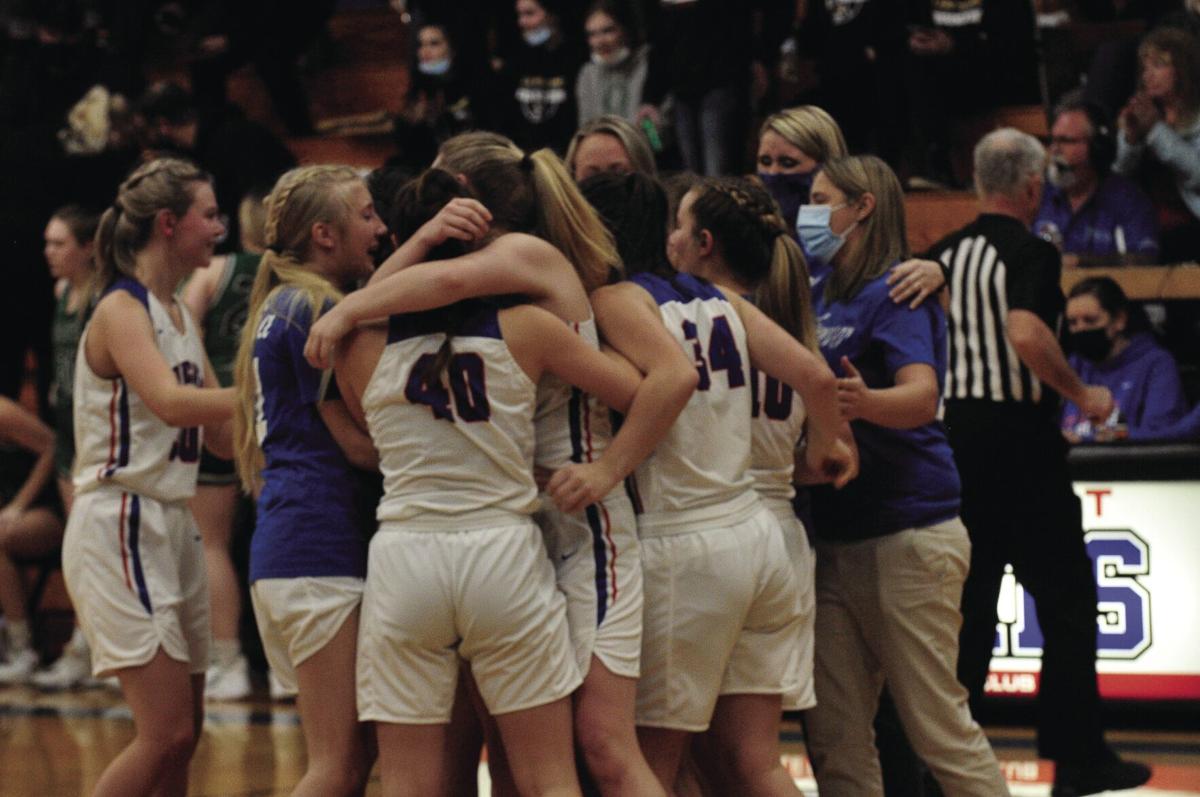 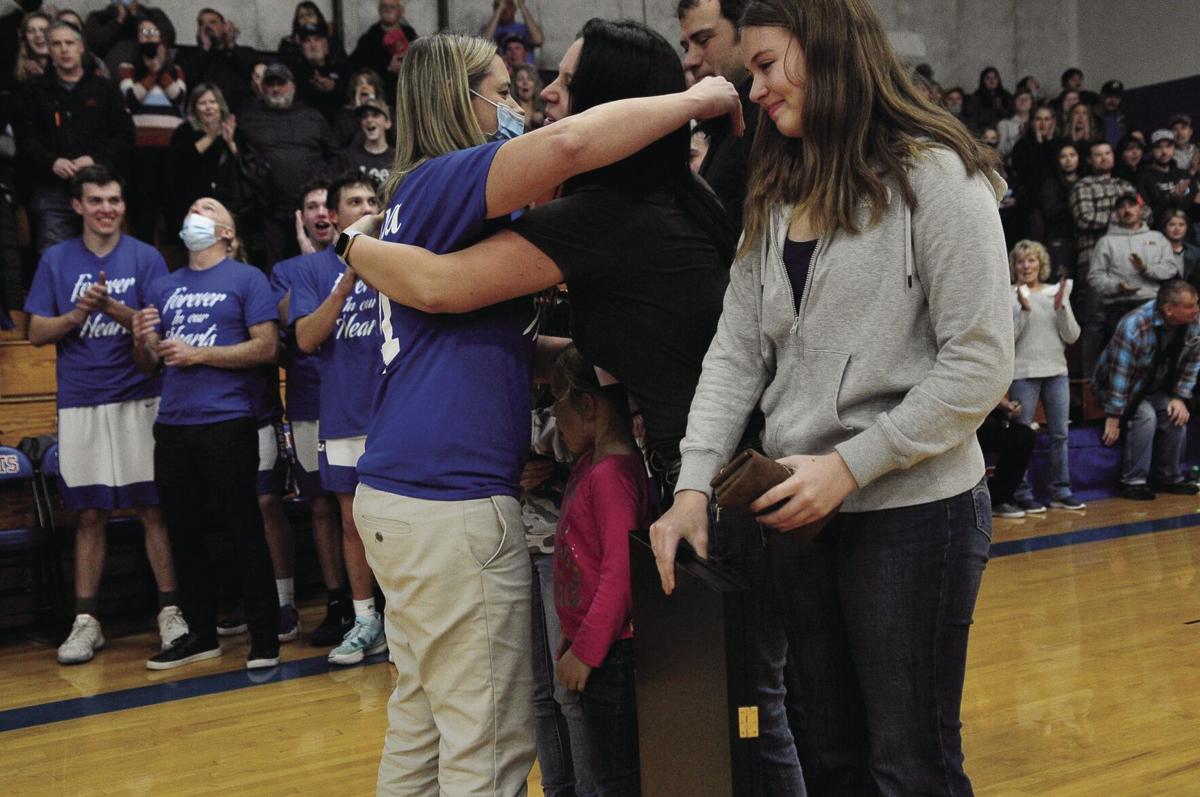 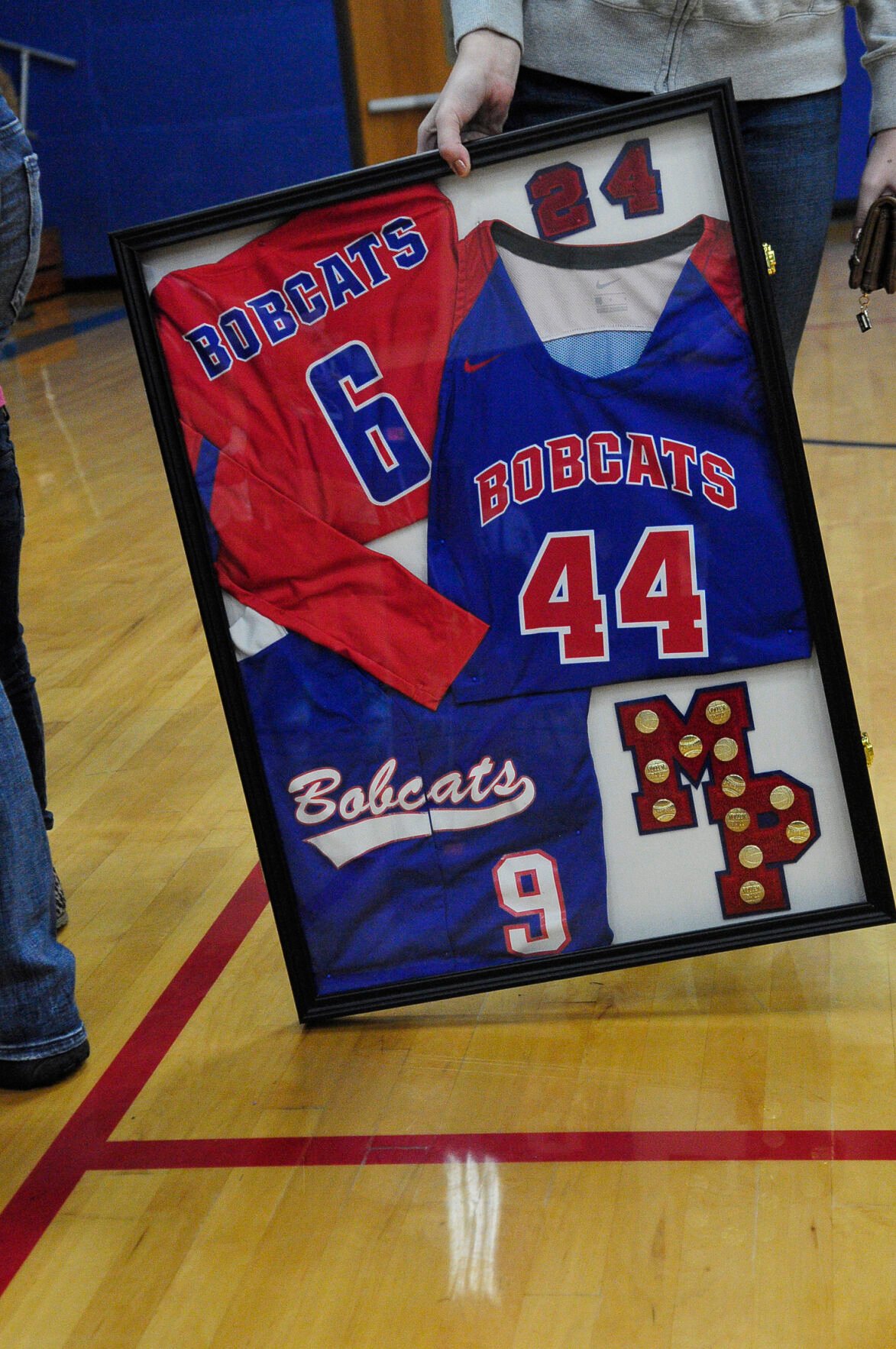 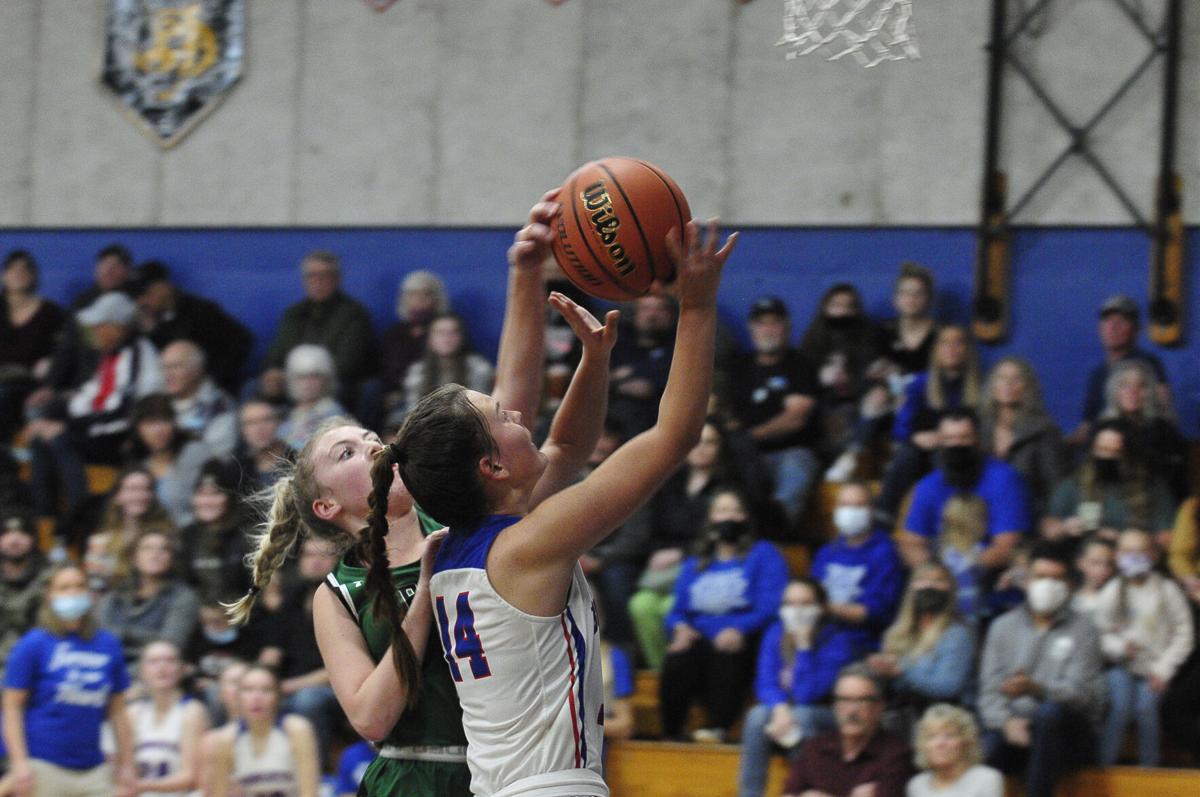 Myrtle Point's Maddi Reynolds tries to get up a shot during the win over Waldport. 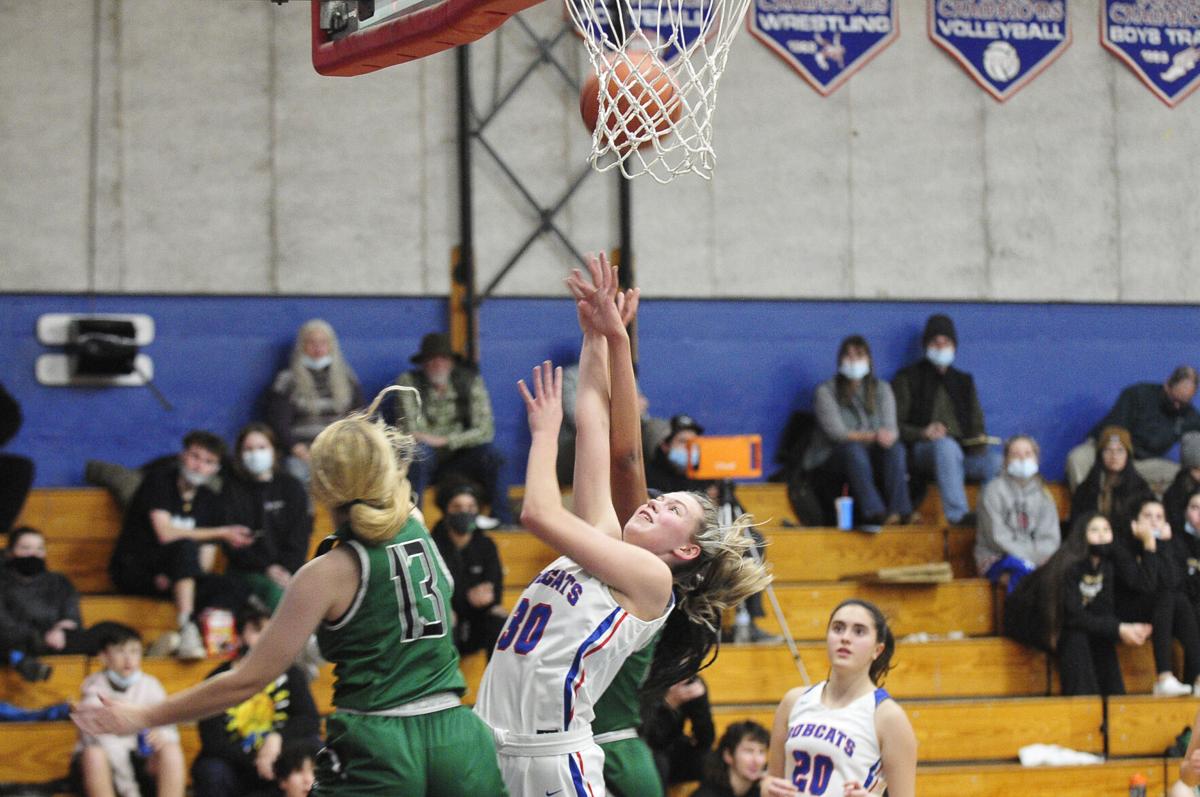 Myrtle Point's Hayden Weekly is fouled while going to the basket.

Myrtle Point's Maddi Reynolds tries to get up a shot during the win over Waldport.

Myrtle Point's Hayden Weekly is fouled while going to the basket.

MYRTLE POINT — This was the kind of game Makaia Gilkey would have loved — a tight contest for her Myrtle Point Bobcats that ended with a victory for her team.

The squad’s 47-45 win over visiting Waldport in the Sunset Conference opener for the two teams Tuesday night turned out to be a perfect tribute to the Myrtle Point sophomore, who was killed in a car accident last week.

The emotional night started with the team honoring Makaia’s memory while presenting gifts to her family and ended with the victorious Bobcats posing for pictures with her mom and two of her three sisters.

“Our goal was to make Makaia’s family smile — to give them a reason to smile,” Myrtle Point coach Jennifer Sproul said. “We did that.”

Sproul fought tears before the game while handing Makaia’s family a display case with her basketball, volleyball and softball uniforms, as well as her varsity letter and the letterman’s pins she would have received for all three sports. After the game, Sproul shared a tearful hug with assistant coaches Erika LaFranchi and Kaylie Parrish before having the traditional post-game meeting with the squad in the locker room, where she again got emotional.

“I have no idea how many games I’ve coached, played in or assisted,” Sproul said. “I can guarantee I’ve never been more proud.

“I am so proud of these girls.”

The Bobcats traded the lead with the Irish throughout the close game before coming up with big plays down the stretch to earn the win.

“All game, we battled,” Sproul said. “We played hard. We played like a team that was mentally exhausted, and we were.”

The squad had spent little time together following the tragedy.

The team’s first practice after Makaia’s death became not a practice, but a gathering that Sproul said was very hard.

“We sat and talked about how fragile life is,” she said. “We need to remember tomorrow isn’t guaranteed.

“We talked about how we treat each other as teammates. We sat and talked and cried and told stories (about Makaia).”

The sophomore was a leader on the junior varsity team and the biggest cheerleader on the bench during varsity games, Sproul said.

“She was the first to jump up and cheer,” the coach said.

And she was an invaluable practice player for the squad, battling with Myrtle Point’s post players to toughen them up, showing her competitive spirit all the time.

“She was truly just loud and proud and a vocal leader for us,” Sproul said. “She was so positive.”

Given Makaia’s personality, Myrtle Point Principal Kayli Fandel told the huge crowd a moment of silence wouldn’t be appropriate before the game while talking about Makaia.

“Typically, we would end this with a moment of silence, but Makaia was not a quiet soul,” Fandel said. “Makaia was outgoing, enthusiastic, and always made her presence known, so we are going to shout to the heavens in memory of Makaia.”

Fandel then prompted the fans to “cheer, scream and make some noise.”

In addition to the jerseys, the boys basketball team presented a mug with Makaia’s uniform number 44 and the girls basketball players presented the family with 23 roses, one from each member of the varsity and junior varsity teams, as well as hugs.

Both the boys and girls teams wore matching blue warmups with the words “Forever in our hearts” on the front and Makaia’s name and number on the back — made possible by BNT Embroidery — and the girls also wore ribbons in Makaia’s favorite color, pink, with her number during the warm-ups.

That all set the stage for the game, which fittingly came down to the last minute.

Waldport erased a five-point Myrtle Point lead in the final few minutes, and went in front by two points when Allie Storts, one of Myrtle Point’s senior leaders, came up with a series of big plays.

First, she was fouled while starting a drive to the hoop, sent to the foul line for a one-and-one opportunity.

She sank the first, to the delight of the huge crowd, but missed the second, which she later said is often a tendency late.

“I usually miss my second free throw,” she said.

But Storts made up for the miss by grabbing the rebound and then finding Grace Bradford open under the hoop for the go-ahead basket.

“I just draw the defense in and get it to my post,” Storts said. “I knew Grace was going to be there.”

Storts then came up with a steal on Waldport’s possession and added another free throw as the Bobcats held on.

“We decided before the game this was for Makaia,” said Sarah Nicholson, another senior leader for the team. “Losing wasn’t an option.”

Nicholson said the team had to overcome a lot of emotions.

“This was probably the hardest game I’ve ever played,” she said. “I usually don’t cry before the game.”

But, she added, the team played its best contest.

“I think it was the first game our team really came together and played as one team,” Nicholson said.

Maddi Reynolds led the Bobcats with 15 points, including two four-point plays in the first half where she was fouled while making a 3-pointer and added the free throw. Nicholson added 11 points and Bradford eight.

Lillyn Legrand had 15 points and Charity Smith 14 for the Irish.

Waldport wasn’t quite good enough to put a damper on the celebratory mood of the evening.

The big crowd, the largest in recent memory for a Myrtle Point home game, showed how much Makaia touched others, Orr added.

“She meant a lot to the community,” she said.

The same community has helped the family get through the past week.

“Everyone is grieving with me,” Orr said. “There’s no way I could do this without the community support.”

Part of that support is a new annual scholarship in Makaia’s memory. All proceeds from Tuesday’s game will go to the scholarship fund, with the award presented to a senior girl each year. Orr and her husband, JB, will select the recipient.

While Orr was happy with the outpouring of support Tuesday, she was thrilled with the outcome of the game.

“Waldport is hard (to beat),” she said. “Makaia would have left happy.”

“She was fun and goofy and she never got down,” Storts said. “I think we made her proud tonight. I know we did.”