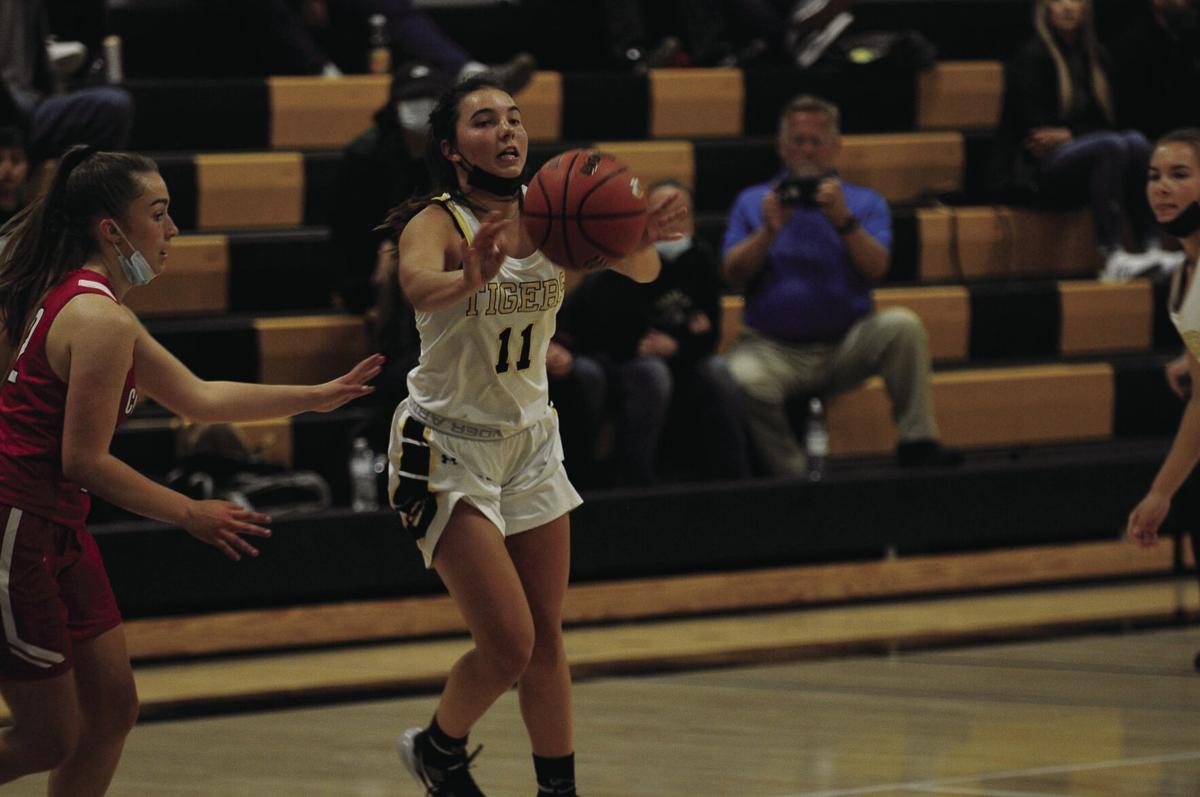 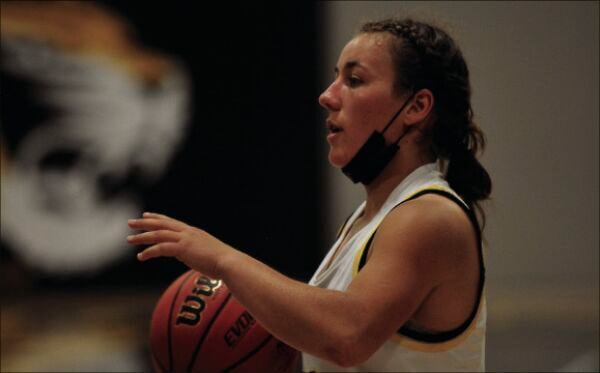 Bandon’s Sterling Williams directs her teammates on a play during Saturday’s win over Coquille.

BANDON — The Bandon girls basketball team keeps rolling along, with a 48-20 win over visiting Coquille on Saturday morning the Tigers’ third in three days and eighth straight to start the season.

“I think we’re doing super good,” said Bandon senior Sterling Williams. “What I’m going to put it toward is how well our team is working as a team.

“All of us have a set of skills and we are working together and fitting those skills together like a puzzle.”

On Saturday, they overwhelmed Coquille with their press in the first quarter, building a 16-7 lead. Then the Tigers pulled off the press and let their half-court defense and unselfish offense do the work the rest of the way.

“We’re just very patient,” Williams said. “We transition the ball very well, but we slow down and collect ourselves well.”

And the Tigers can do their work inside or outside.

After leading 27-8 at the half, they scored all their points in the third quarter on 3-pointers by three different players — Katelyn Senn, Olivia Thompson and Williams.

By the end of the game, Senn had 15 points and Thompson nine.

Bandon coach Jordan Sammons said he was impressed by the efficiency of the press, particularly because the Tigers have had little time to practice given the busy schedule of games.

“To work on a press, you have to get after it in practice and it is hard work,” he said. “It was nice seeing them learn today where they could be successful and where they could rotate to.”

In addition to Saturday’s game being the third in three days, it came at 9:30 in the morning after a night game in Myrtle Point on Friday.

“Our girls are hard workers,” Sammons said. “They don’t make excuses for themselves.

“They’re skilled players and they do everything that I ask.”

The Tigers improved to 7-0 in league play, well on their way to a second straight Sunset Conference title.

“We’re in good shape for that, but we are looking ahead to our next game,” Williams said. “Gold Beach is our next game (Monday night) and they are going to be looking to take us down.”

In a 49-19 win over Myrtle Point on Friday, Kennedy Turner had 12 points, Senn 10 and Thompson nine. Maddi Reynolds had 11 for the Bobcats.

While Bandon is rolling, Saturday’s loss was the sixth in a row for Coquille, which also lost 53-21 to Douglas on Friday and 40-24 at Gold Beach on Thursday.

Coquille coach Dan Hampton pointed out the Red Devils have a lot to look forward to.

“We are looking toward the future,” he said. “We have strong junior high classes coming up and we have a lot of young kids (on the team now).

“We do not have a senior in the program.”

But with all those young players and a busy schedule, the Red Devils haven’t had a chance to make a big stride this year.

“The toughest thing is we are playing five games in a seven-day stretch,” Hampton said. “We need the practice time.”

Hailey Combie had 12 points for the Red Devils against Bandon and Jaylyn Rayevich had five.

“I think we will be fine,” Hampton said. “We are taking some growing pains right now.

“And Bandon is just really good.”