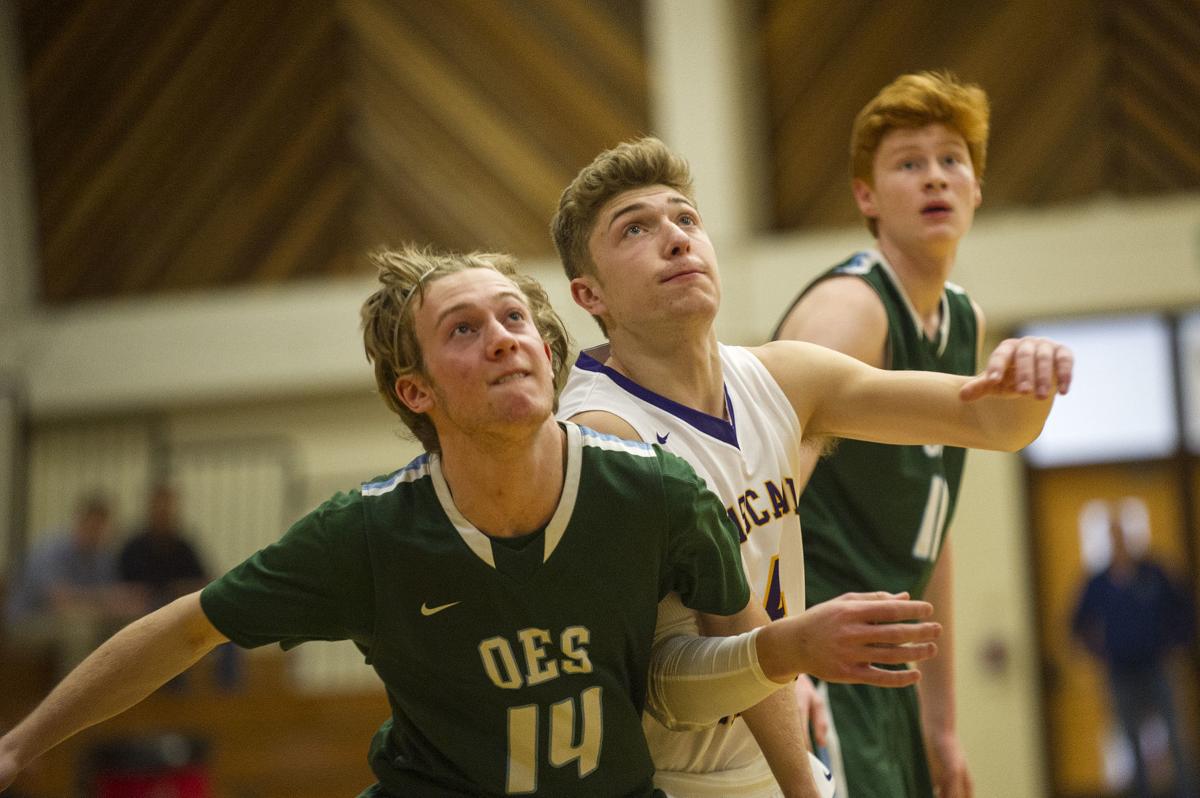 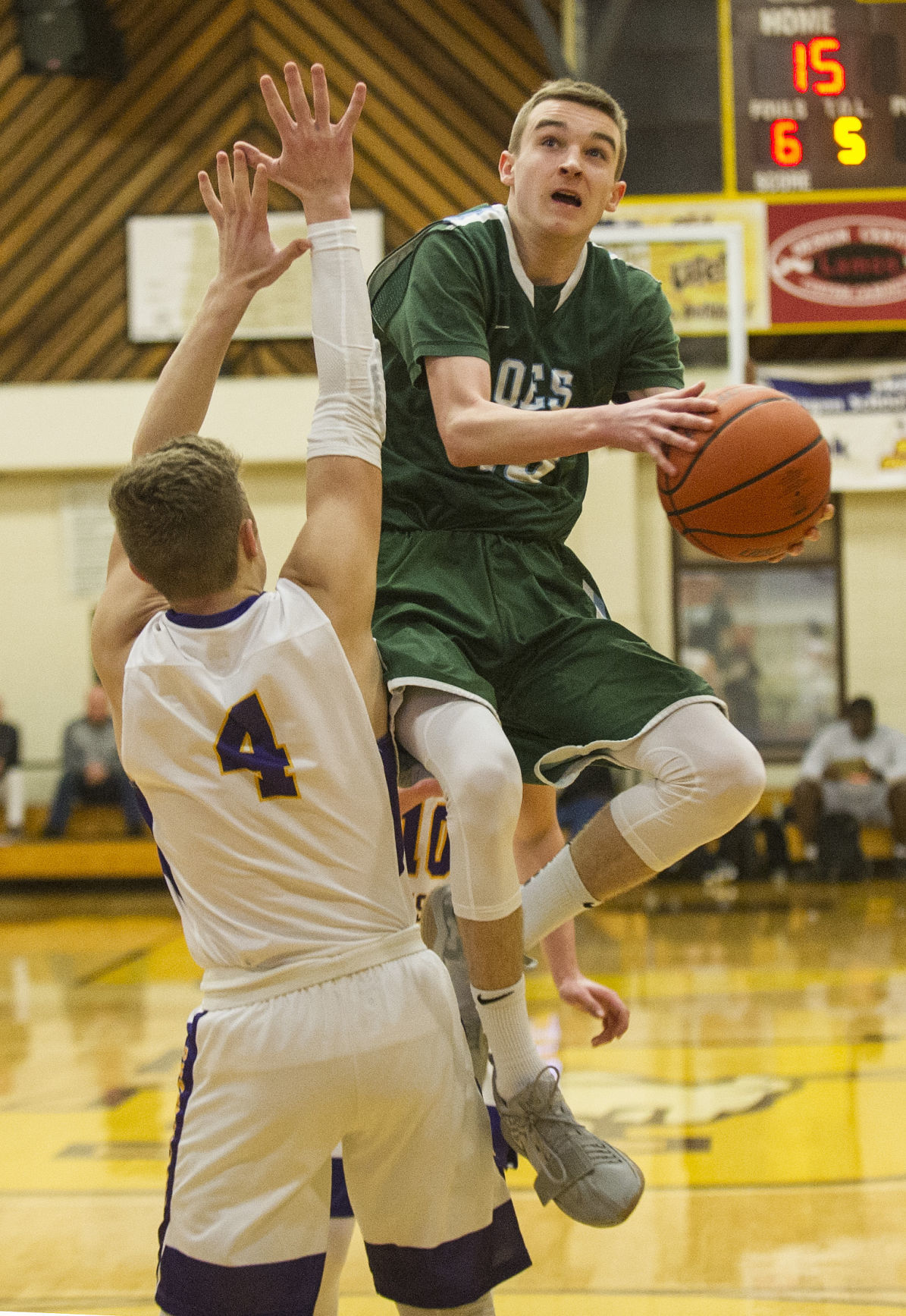 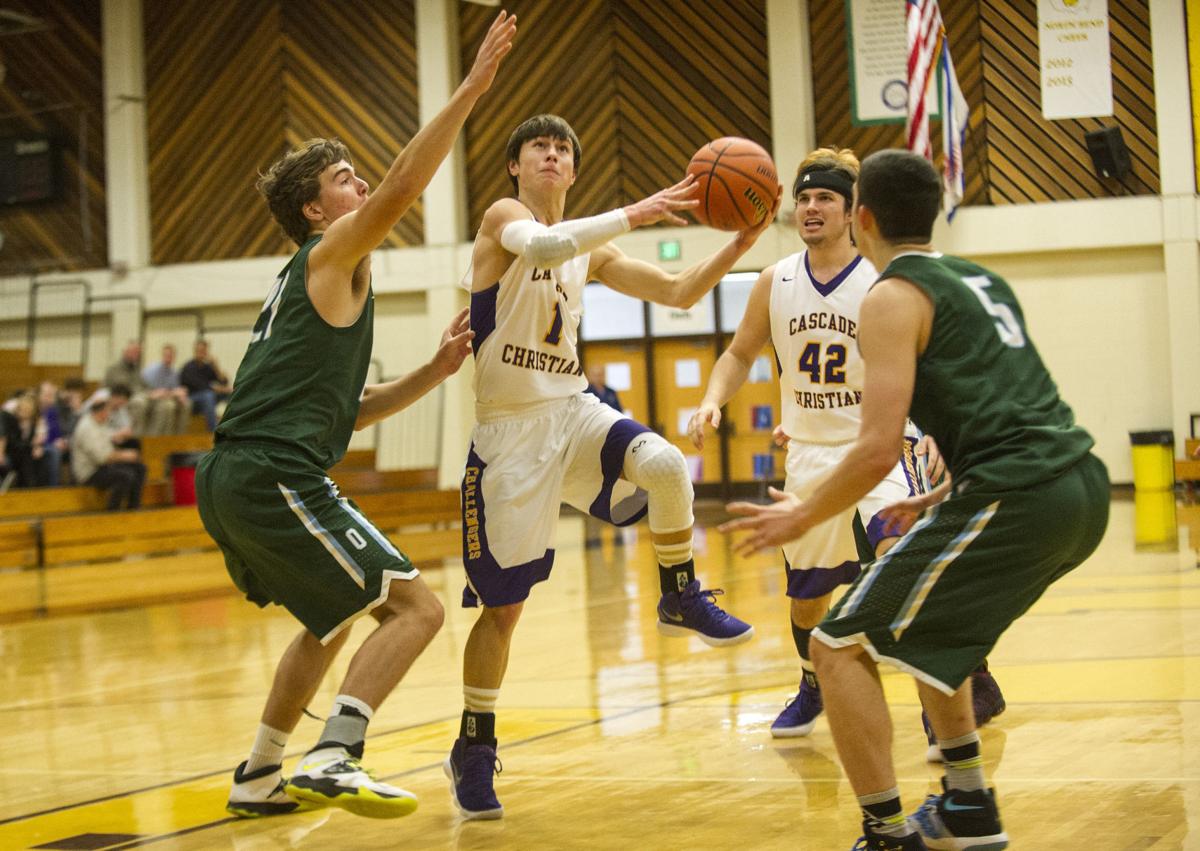 Kyle Reece drives to the basket for Cascade Christiana as they play Oregon Episopal during a class 3A state championship semi-final game Friday at North Bend High School. 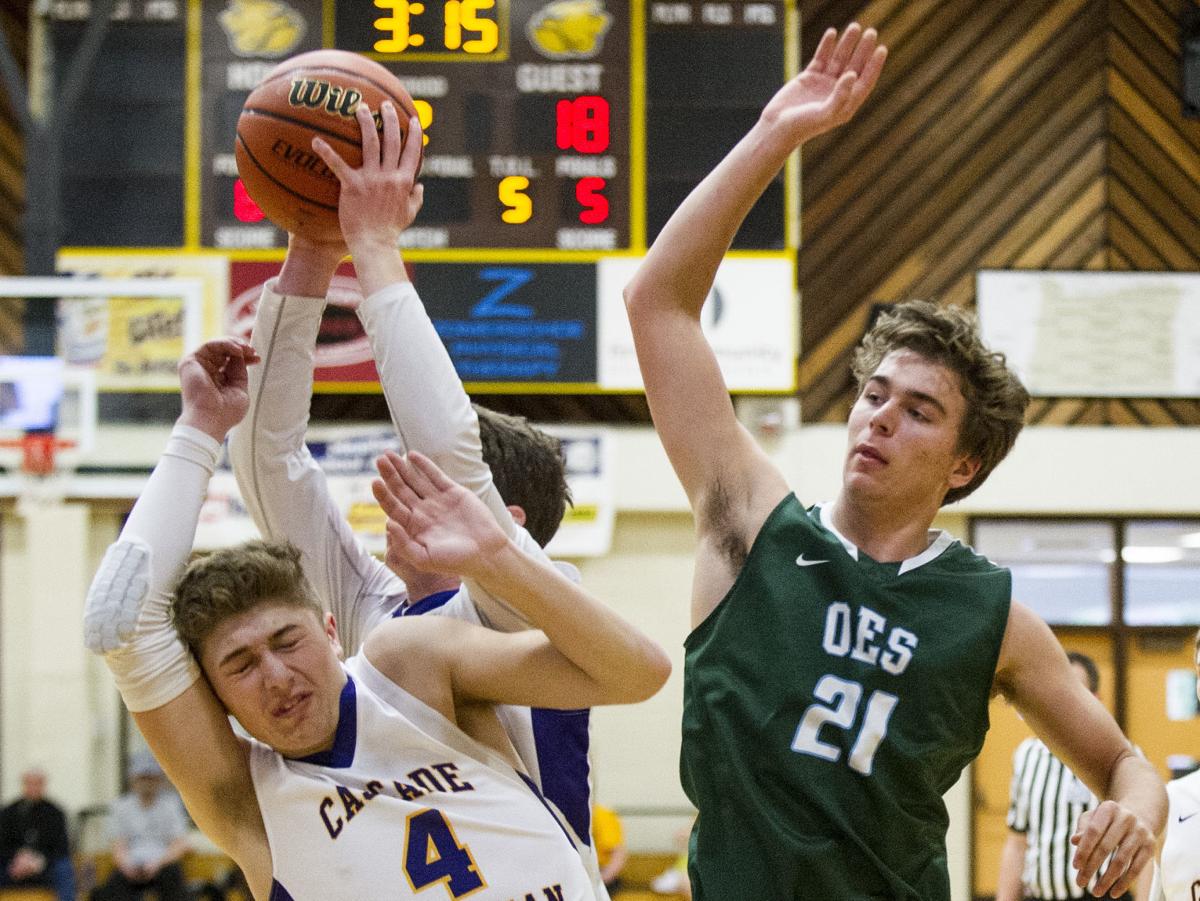 Oregon Epicopal and Cascade players jump for a rebound during a class 3A state championship semi-final game Friday at North Bend High School. 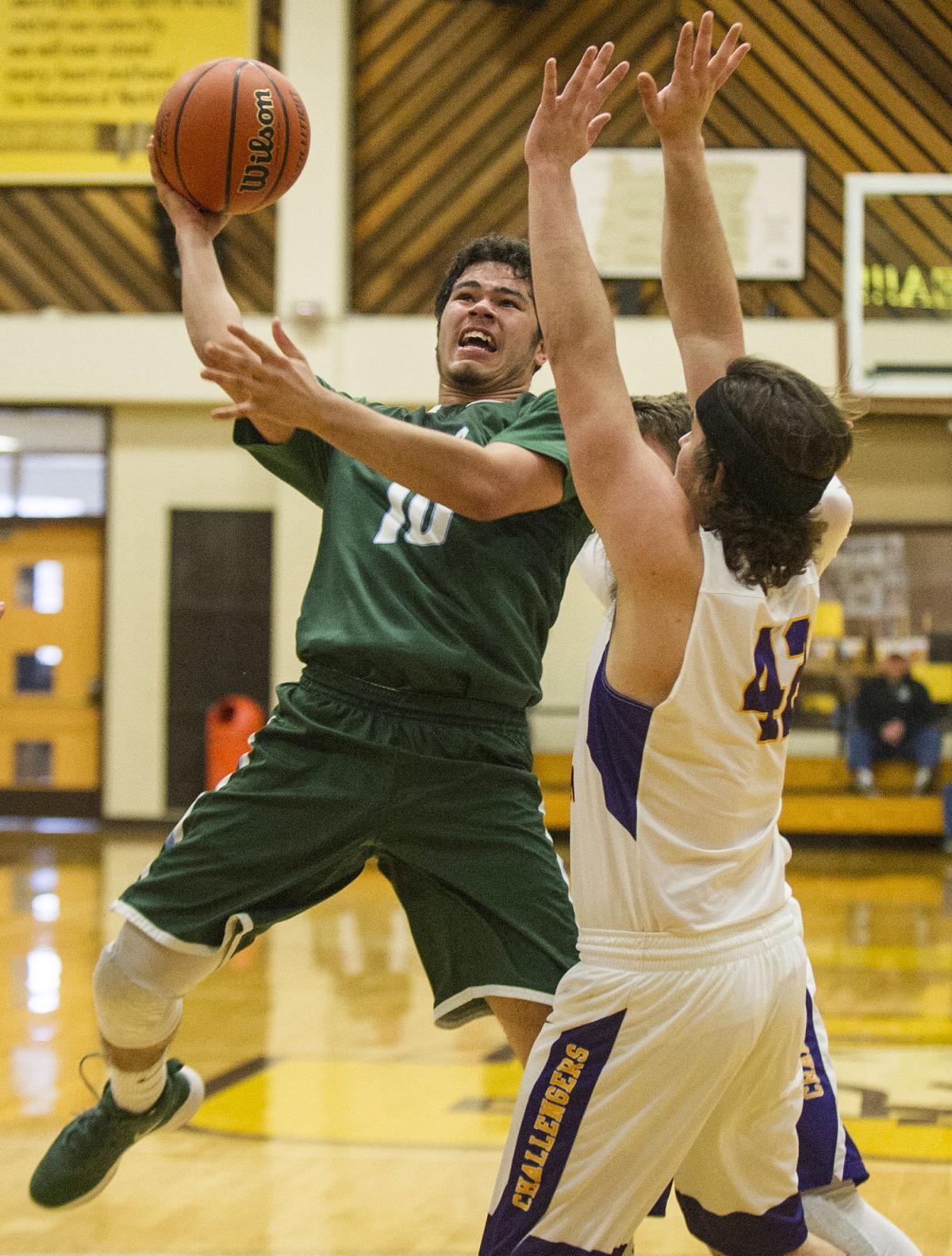 Kyle Reece drives to the basket for Cascade Christiana as they play Oregon Episopal during a class 3A state championship semi-final game Friday at North Bend High School.

Oregon Epicopal and Cascade players jump for a rebound during a class 3A state championship semi-final game Friday at North Bend High School.

NORTH BEND — Cascade Christian wasn’t happy with how its first round game against Santiam Christian went at the Class 3A boys state basketball tournament Thursday.

After blowing a halftime lead against the Eagles, the Challengers found themselves in the consolation semifinals against Oregon Episcopal on Friday morning and felt they had something to prove, mostly to themselves. Cascade Christian used a burst of energy in the third quarter to pull away from the Aardvarks 42-31 at North Bend High School.

“Our assistant coach, Coach (Paul) Sha, pulled us aside after halftime and he kinda told us this could be our last game of high school,” senior guard Tyler Cochran said. “There’s nine seniors on our team. And he pulled the bench aside too and told them to get up. Bench brought more energy and that’s what gave the starters more energy.”

Oregon Episcopal relies on senior guard Ian Holzman for most of its scoring, and Cascade Christian planned for that.

At any given time, Ben Dunn or Kyle Reece or Haiden Schaan would be checking Holzman, forcing him to initiate the offense from 25 feet away from the basket and making bringing the ball up difficult.

“That little No. 1 (Reece) is just a menace defensively,” Cascade Christian head coach Brian Morse said. “Just pushing (Holzman) out as far as possible so they start their offense a little further out. And Dunn did a good job on him too with his length.”

“We couldn’t get anything going offensively," Oregon Episcopal freshman Charles Willmott said. “You beat your guy and there’s another one standing there. You dump it off, there’s another guy. That was really impressive teamwork.”

Oregon Episcopal couldn’t respond to Cascade Christian’s burst of energy at the start of the third quarter.

“They gave a lot of energy yesterday against No. 2 Dayton,” Oregon Episcopal coach Lauran Pratt said. “That’s probably why we shot 29 percent and 4-18 from 3. We were definitely the underdog going in, but the kids played well. Competed, battled ‘em, but we just didn’t have enough in our tank or enough kids to make shots.”

The Aardvarks kept pace for the first half but they couldn’t find any consistent scoring outside of Holzman in the initial two periods.

Then the Challengers burst into the third quarter. Cochran hit a 3-pointer on the quarter’s first possession, then Cristian Flores Alatorre hit an elbow jumper the next time down to put Cascade Christian up 29-23 barely a minute into the period.

“We had some issues in the first half, I thought we weren’t being patient offensively,” Morse said. “We came out in the third quarter and really took it to ‘em offensively. We wanted to attack and be stronger and we did that.”

A Holzman jumper four minutes later cut the Cascade Christian lead to two at 29-27, but a Dunn layup and a Cochran jumper put the Challengers back up six.

Joel McLemore took over to start the fourth quarter, scoring seven consecutive points to give Cascade Christian a 40-28 lead with five minutes and change remaining. McLemore accounted for all nine of Cascade Christian’s fourth-quarter points. He finished with 17. Cochran added 10.

Oregon Episcopal was a bit of a darkhorse at the tournament, scoring a 17-point win at Creswell to qualify — they were the only boys team to advance with a road win.

Sporting a roster with just four seniors, one junior and six underclassmen, Oregon Episcopal has a chance to return to Coos Bay in coming years.

“Hopefully we’ll be back next year and get at least one win, make it farther,” Willmott said.

For Cascade Christian, the opportunity to continue playing and leave a legacy remains.

“I keep telling these guys how do you want to be remembered as seniors in your last couple games?” Morse said.