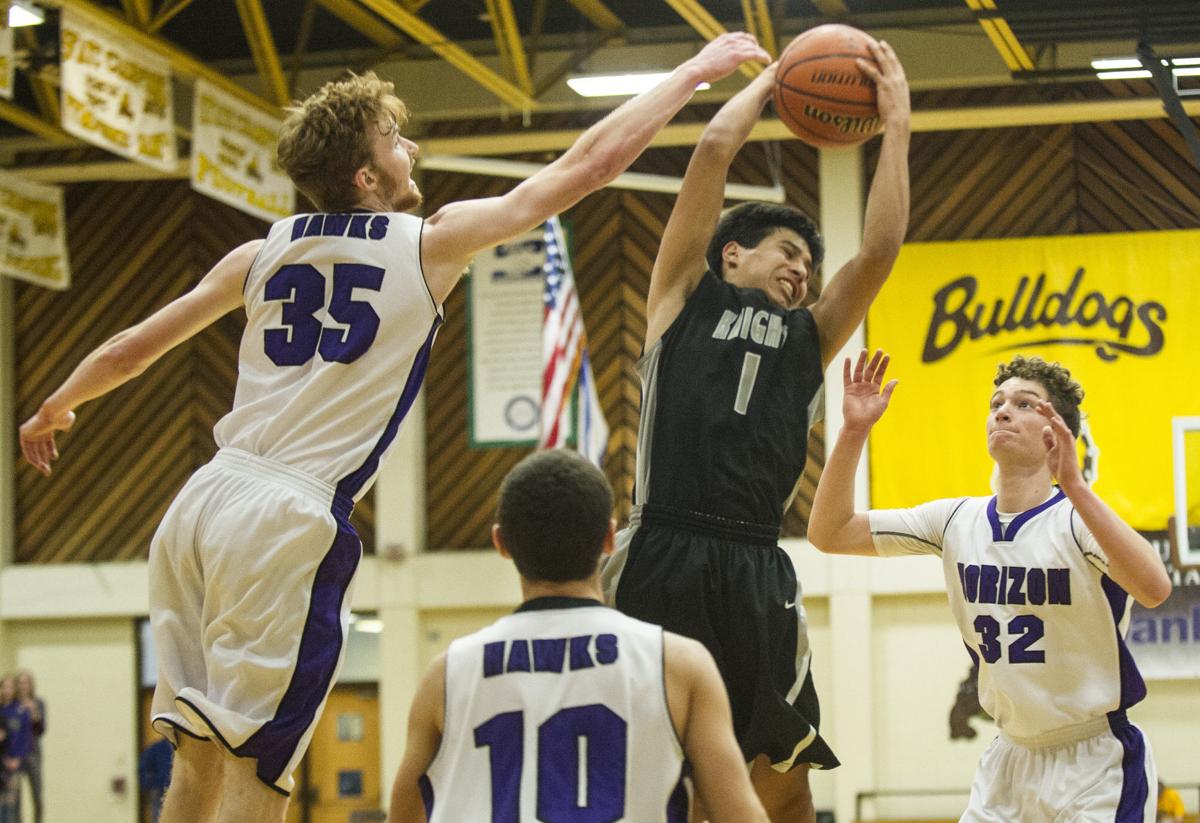 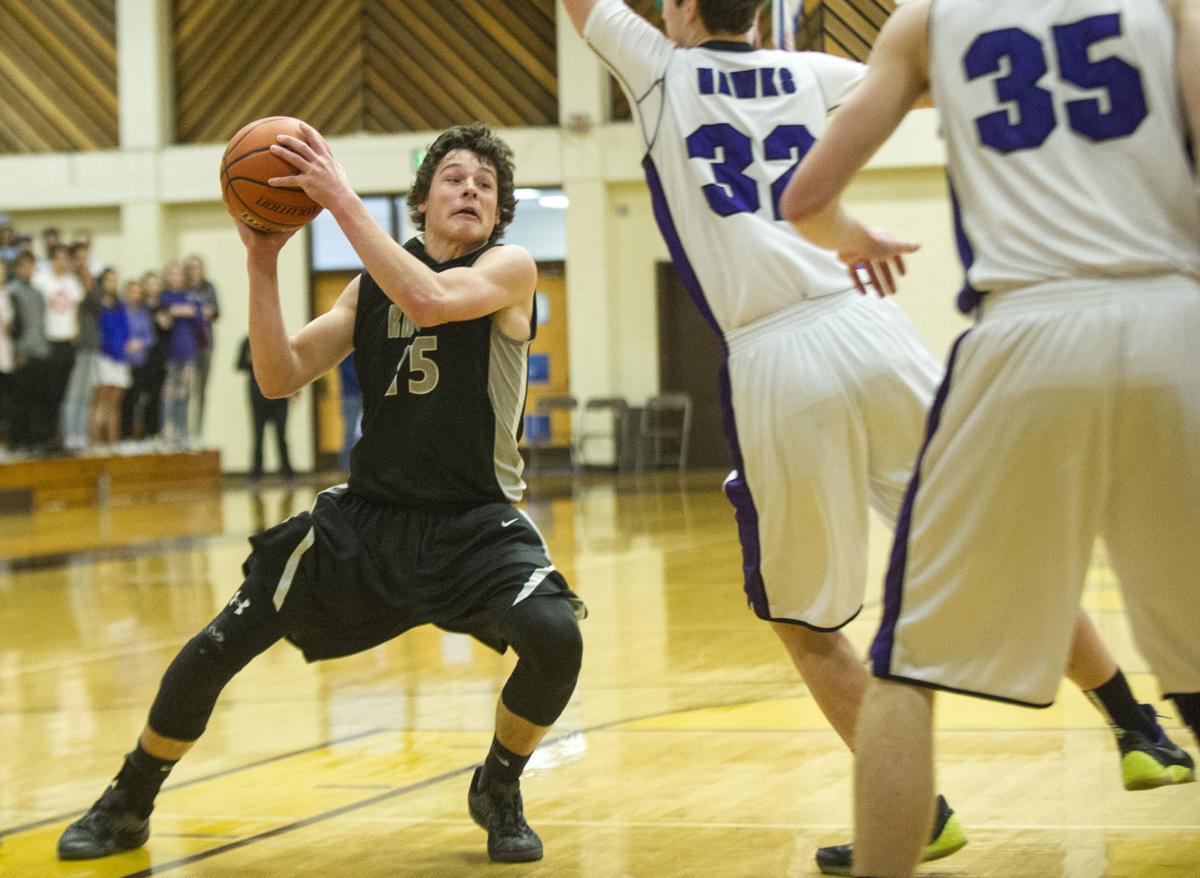 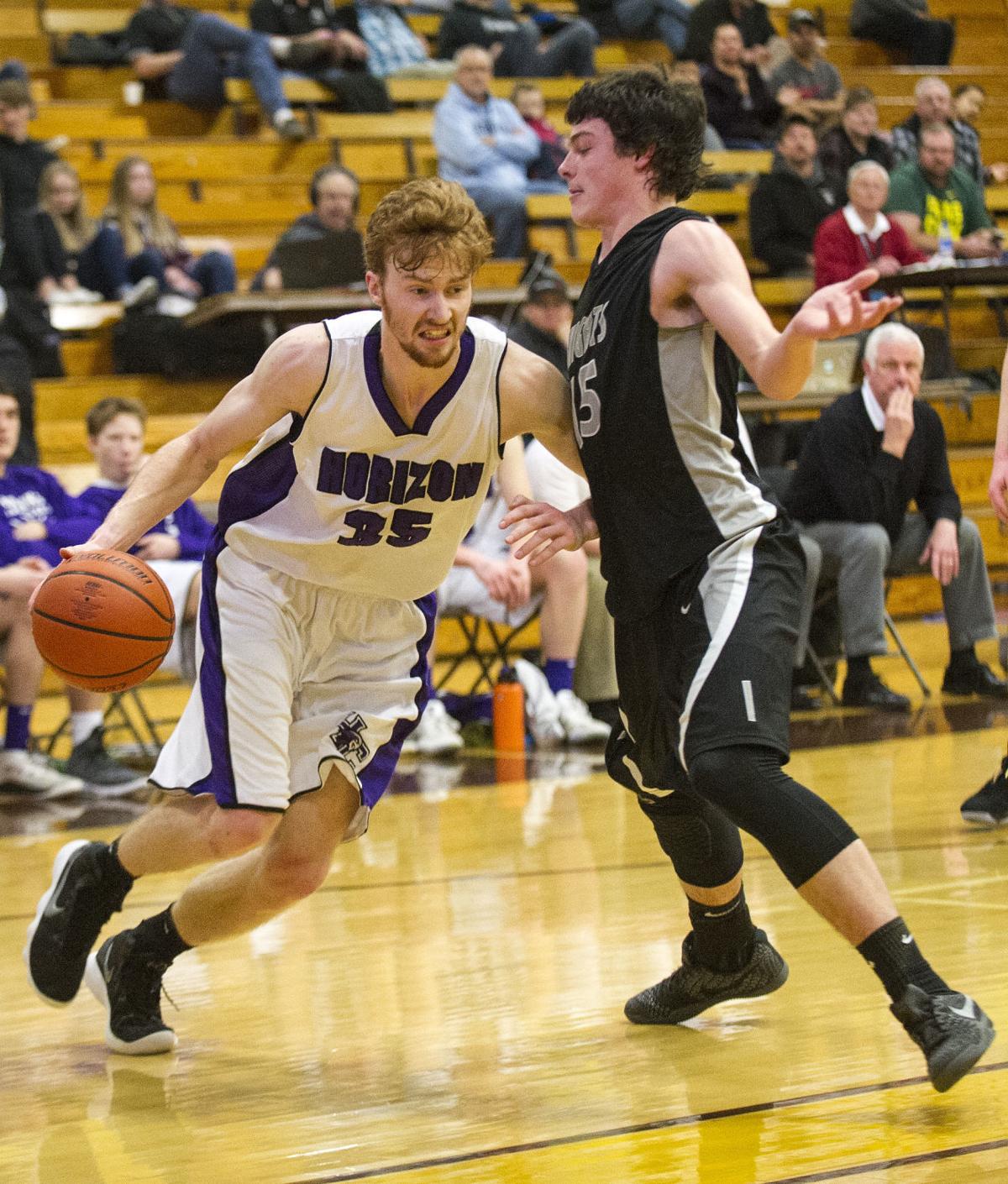 during a class 3A basketball state championship at North Bend High School.

during a class 3A basketball state championship at North Bend High School.

NORTH BEND — Making its first trip to the Class 3A state tournament after recently being pulled up from Class 2A, the Irrigon Knights felt like they had something to prove.

After a blowout loss in the opener against top-ranked De La Salle North Catholic, when it didn’t shoot well, Irrigon was anxious to once again try to demonstrate its quality and that it belongs. Despite blowing an eight-point thrid-quarter lead, the Knights made clutch free throws down the stretch and defended well enough to beat Horizon Christian 58-50 on Friday morning.

“Our shots were falling today, as easy as that sounds,” Knights coach Davy Salas said. "We had opportunities to keep that game close (yesterday). Kids don’t understand what kind of environment they’re in and how nervous they are. But today shots were falling. Johnny (Phillips) was aggressive to the basket.”

Phillips led Irrigon with 18 points and nine rebonds and Adrian Roa added 13 points, but it was the Knights’ 3-point shooting that was the difference.

Irrigon made just one 3-pointer in Thursday’s loss, but nailed four of its 10 shots from deep on Friday. Lino Covarrubia made both of his 3-point attempts and Daniel Vera made two of his shots from deep. Vera’s 3 with 3:39 in the second quarter gave Irrigon a nine-point lead at 35-26.

“We figured out they could shoot,” Horizon Christian’s Brady Egger said.

But Horizon Christian didn’t go away. The 6-foot-7 senior Anthony Sprauer was a scoring force inside again. He scored 24 points to lead all scorers.

However, Irrigon clamped double teams on him whenever he got the ball inside and poked the ball away increasingly over the game.

“We played our basketball. We played as a team. We played really good team defense. That’s what we take our pride in. Defense wins games.”

Horizon Christian hit five 3s, but it took 19, so the percentage favored Irrigon. Kyle Free was only 2-of-8 from long range and Egger was 1-5.

The Hawks found themselves down 36-28 after a three-point play from Roa with 5:34 to go in the third quarter, but that’s as far away as Irrigon got.

Horizon Christian used a 9-0 run to take a 37-36 lead on Free’s second 3 of the day with 1:37 to play in the period. The Hawk defense was pressuring and forcing Irrigon turnovers and turning them into points.

Unfortunately for Horizon Christian, that run was simultaneously its buoy and its anchor. The normally patient and deliberate Hawks sped up a bit with the energy of the run, and Irrigon used that over-eagerness to pounce.

“That’s where we needed to slow down a little bit and play with some patience,” Horizon Christian coach Dave Brown said. “I think we were so charged up to get back in that our guys — we used one timeout to try and get them to realize that. Mainly I give credit to Irrigon. They did a great job.”

The Knights, who got Horizon Christian’s foul count into the bonus in the third quarter, made all of their fourth-quarter free throws to keep the Hawks at arm’s length.

“Nothing would’ve happened if we didn’t play as a team,” Roa said. “It’s not just one guy, it’s not just Johnny (or anyone else). It’s the whole team. And everybody’s worked their butts off to be here. We’ve put in a lot of hard work. That’s why we’re here.”

For Horizon Christian, the season ends prematurely but not without accomplishment.

“We’ve been blessed to be here several years, we’re just thankful to God we had the opportunity to be here,” Brown said.

For Irrigon, the chance to prove itself continues.

“We want to prove that we are a decent basketball team ‘cause we got doubled a lot as a team,” Roa said. “We play hard, we work our butts off. We just want to play our Irrigon basketball and show everyone we can play.”

Irrigon will face Cascade Christian for fourth place at 9:45 a.m. on Saturday morning at Marshfield.