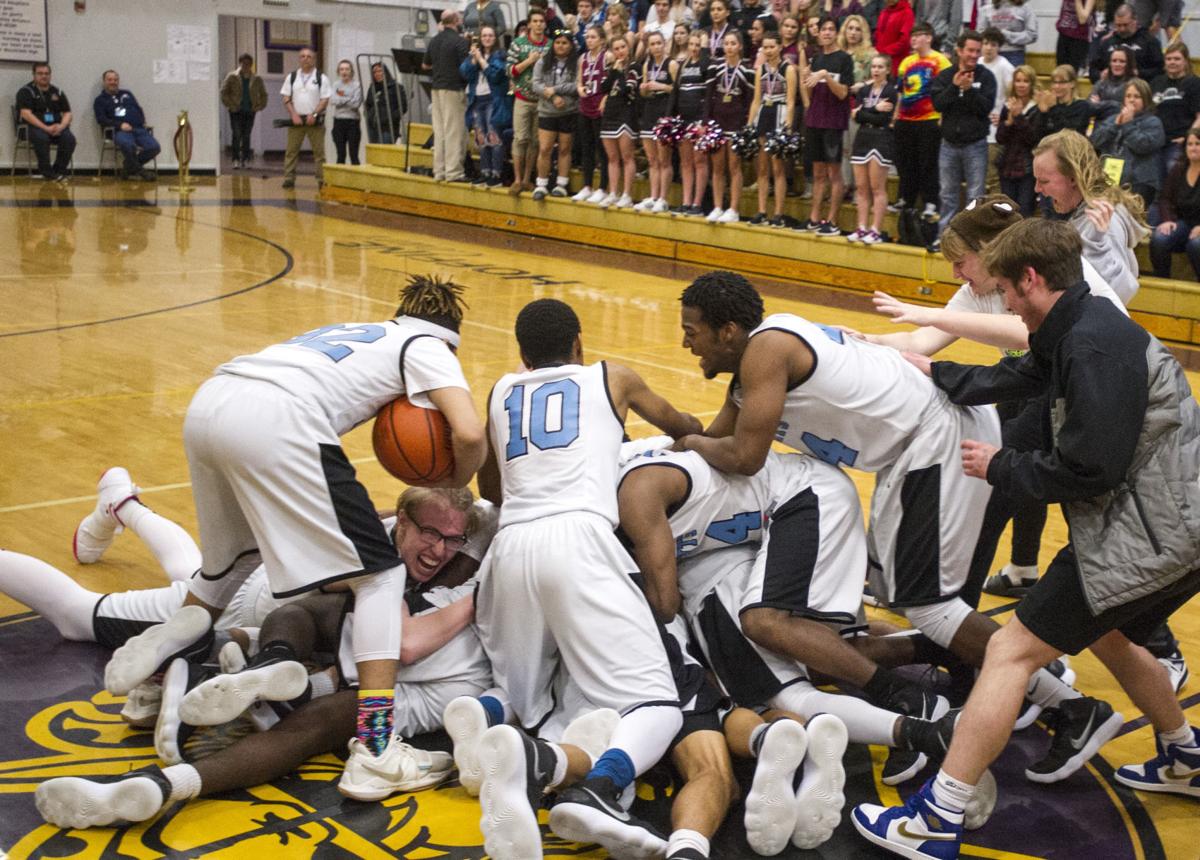 De La Salle North Catholic players pile on as their fans begin to join after the team won the Class 3A state championship title game against Dayton game at Marshfield High School in Coos Bay. 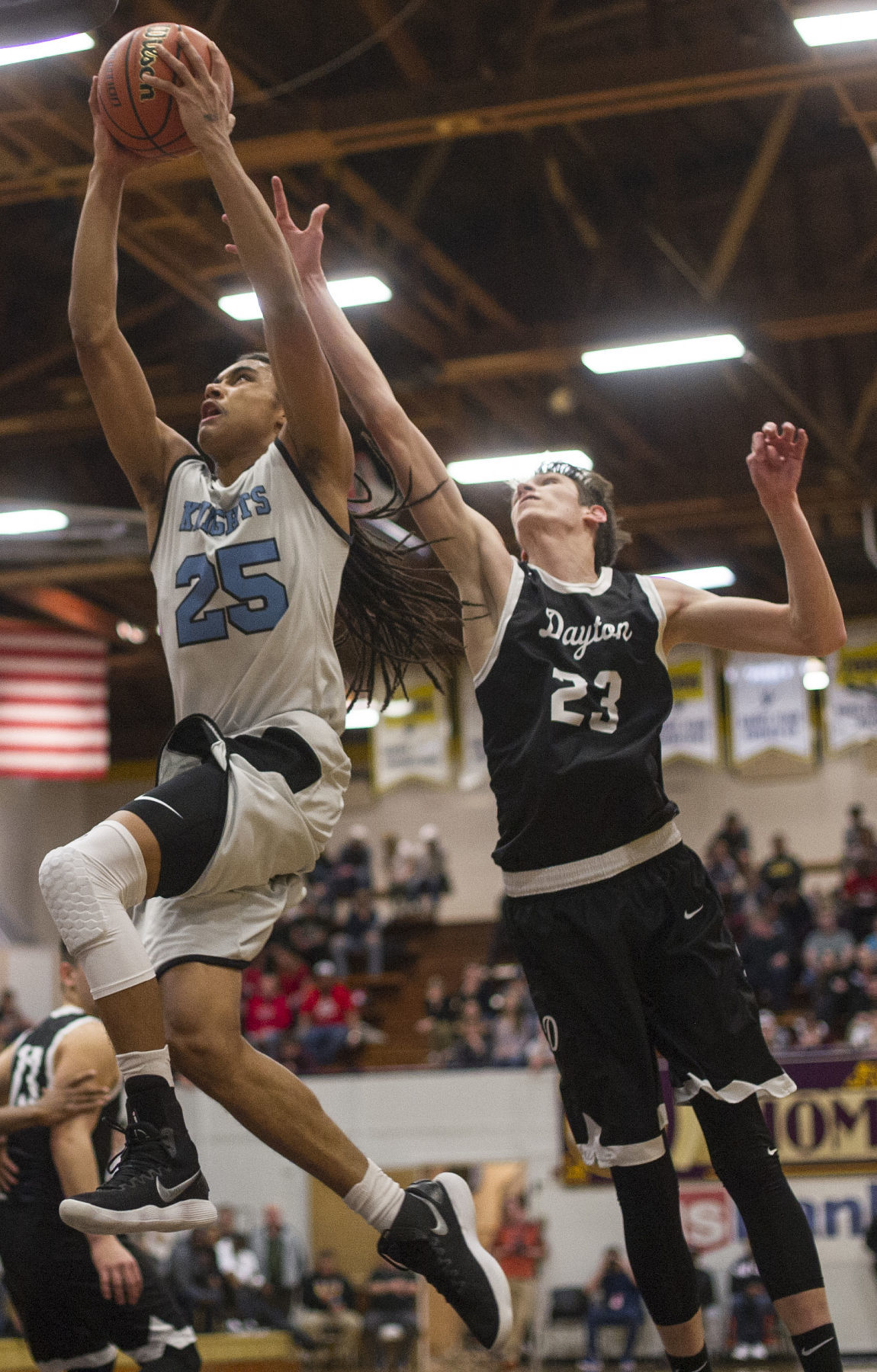 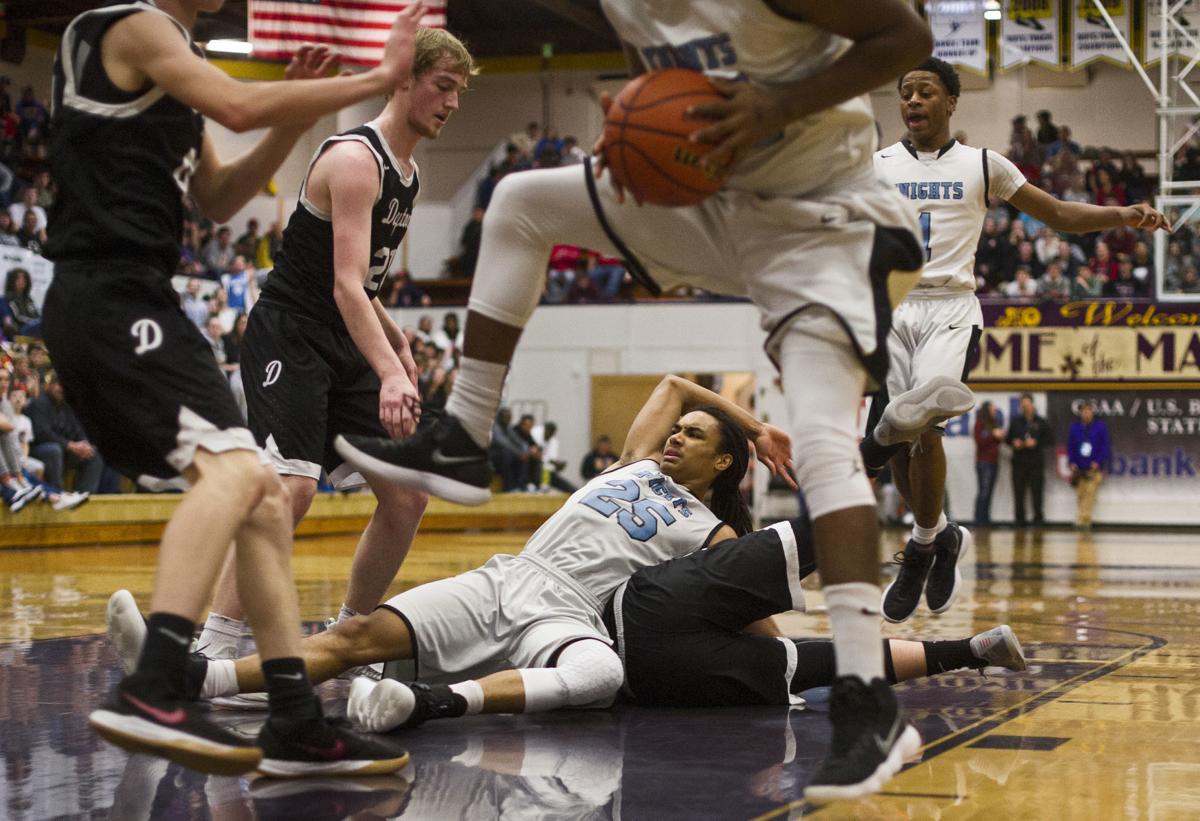 De La Salle North Catholic players pile on as their fans begin to join after the team won the Class 3A state championship title game against Dayton game at Marshfield High School in Coos Bay.

COOS BAY — For two years, the De La Salle North Catholic Knights didn’t even have a place to play, a place to practice.

They called eight different gyms home and had to hold practice as late as 9 p.m. after the public schools finished using their own floors. That was six years ago, when the program began. On Saturday, De La Salle earned its first state basketball championship.

After five title-game appearances — including the last three — De La Salle finally is tops in the Class 3A ranks. The top-ranked Knights used a 13-2 second-quarter run engineered by their bench to down No. 2 Dayton 68-55 on Saturday night at Marshfield.

“This is really surreal,” Kadren Addy said after scoring 19 points and being named to the second-team all-tournament squad. “I was expecting this but it still hit me. I don’t have no words.”

“It’s amazing. Just what we thought it would feel (like),” added Kadeem Nelson, who also had 19 points and was on the all-tournament second team.

When the final buzzer sounded, the Knights rushed from their bench and piled on each other at center court. their cheering section, which included people from several other schools, joined in the jubilation.

After the game, former players who were around in the formative years spoke to the team, thanking the current group and complimenting their play. It was a moment of the circle completing itself.

“It means a lot to a lot of people,” De La Salle coach James Broadus II said. “Just through all the hard work, and this group was a culmination of it.”

From the very start Saturday, De La Salle played with confidence. It was the offensive gameplan to get Kadren Addy the ball to get the senior guard going.

Due to various circumstances, Addy hadn't had a firm impact on either of De La Salle’s previous two games, and Broadus wanted to change that. After winning the tip, De La Salle ran a set it hadn’t used since summer league, a weave around the top of the key while Addy ran the baseline under screens to get him an open 3-pointer on the wing.

The play worked as drawn up and Addy got the clean look. The shot fell, De La Salle had a 3-0 lead, and everything relaxed on the team's bench.

“We had to get him going,” Broadus said. “We felt like if we got him going, that opens up everything. Executed that first play and it set everything in motion.”

“Starting the game off with a bucket, it gets the team all rowdy, rowdy,” Addy said.

But that didn’t necessarily mean Dayton was going anywhere. The Pirates are a state championship-caliber program as well, considering they beat De La Salle in last year’s final, the team's third title in seven years.

And so Dayton, an experienced and patient team familiar with De La Salle’s trademark press, spread the floor in the initial period and had some of its best offensive success.

Dayton shot 4-for-5 in the first quarter and scored 11 points. The thing was, though, it made 11 turnovers.

“They’re pretty hard (to play against),” Dayton junior Lukas Findley said. “Their trap presence is really what gets us going. We had a lot of turnovers and couldn’t do anything.”

De La Salle forward Emmanuel Reiley, a consensus first-team all-tournament selection, had to go to the bench early in the second quarter in foul trouble, and Broadus put largely a whole new unit in.

Turns out, that unit made all the difference, demonstrating De La Salle’s internal motto of “We too deep.”

De La Salle went on a 13-2 run to take control and contributions came from everywhere. Addy hit a 3 and nailed free throws. Malique Sabb hit a jumper and free throws. Traveon Johnson grabbed tough rebounds and brought energy in the back of the Knight press. Owen O’Brien had an offensive rebound and putback. De La Salle started the run down 20-19 with 3:45 to go in the second quarter after a 3-pointer by Tanner Lewis, who led Dayton with 18 points. It went to the locker room up 32-22 and never led by fewer than four the rest of the way.

De La Salle started the third quarter with the same play as the first, but Addy, who had a good look, elected to go somewhere else with it as De La Salle wanted to work clock. It was a smart play from a team looking to seal its first title.

“That’s the hardest thing in the world to do, and against a team like Dayton,” Broadus said of finishing a win. “They got hot. And they play with heart. And they’re not gonna go away.”

The Pirates cut the lead to four with a brief spurt as Matthew Brodeur, Jaysen Howard, who finished with 14 points, and Lewis all scored to make it 32-28 with 5:08 left in the third quarter.

But De La Salle answered with a 9-0 run that took about a minute and included four Kadeem Nelson points and the Knights were back in control.

Dayton’s offense found its groove in the fourth quarter, again showing its resolve. Findley and Lewis each hit fourth-quarter 3-pointers, and the Pirates also got a rather inconsequential one from Jacob Morales in the final 30 seconds, but the Knight press was relentless.

In all, De La Salle forced 18 Dayton turnovers, 11 of which were steals.

“It’s tough, unless you have a kid that’s physical (and) gifted,” Dayton coach Ron Hop said “And they don’t come through all the time. That pressure kinda gets to you and wears on you.”

Broadus, with the net resting around his neck, can now no longer wonder when the Knights will win a final.

The players, too, with their pieces of net in their hats can now celebrate on Saturday night instead of planning for next year’s run in a group text. Oh, how a year brings progress.

How long will they celebrate?

“Until next season,” said Nelson, a junior.