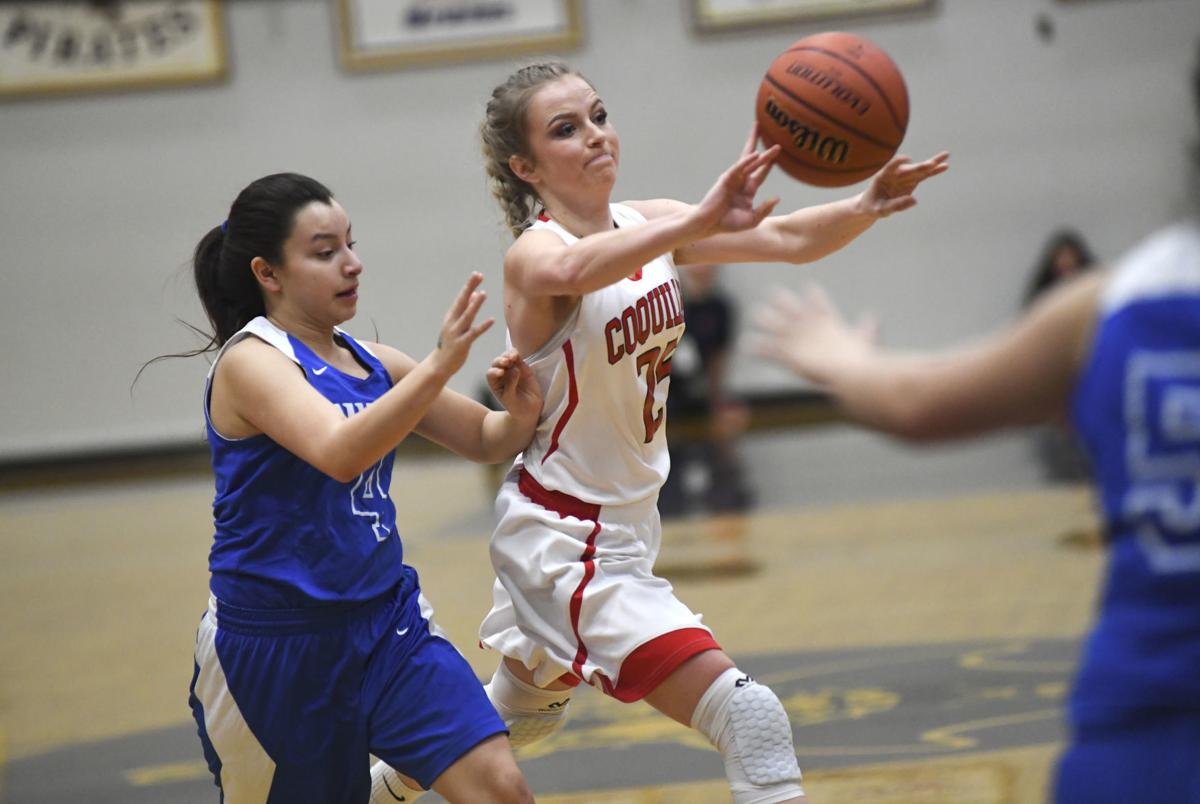 Coquille's Kyra Howard passes to a teammate during the Red Devils' win over Nyssa in the fourth-place game in the Class 3A state tournament on Saturday. 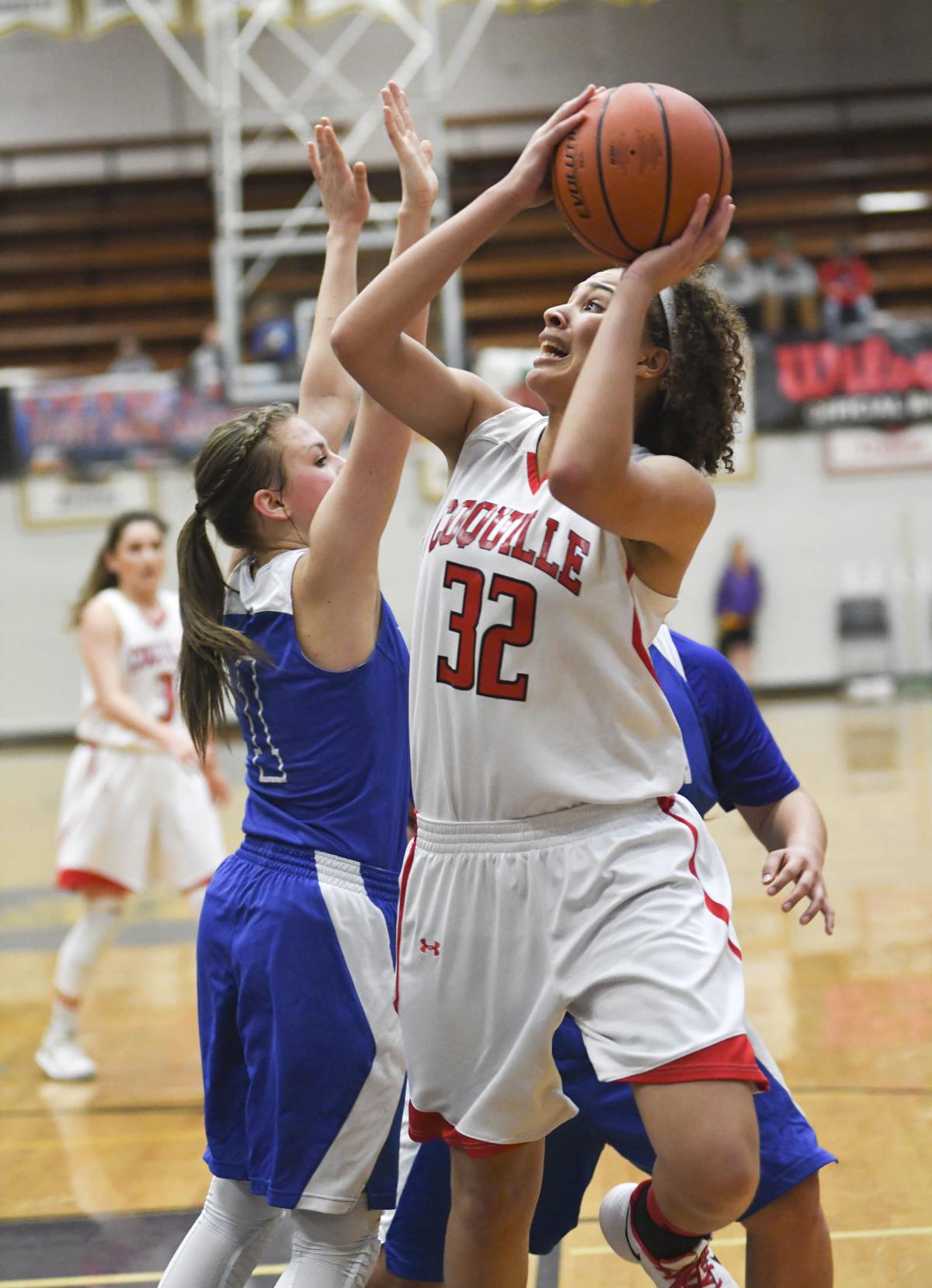 Coquille's Morgan Baird takes a shot at the basket despite defense from Nyssa's Sailor Hartley. Coquille beat the Bulldogs 36-28 to place fourth. 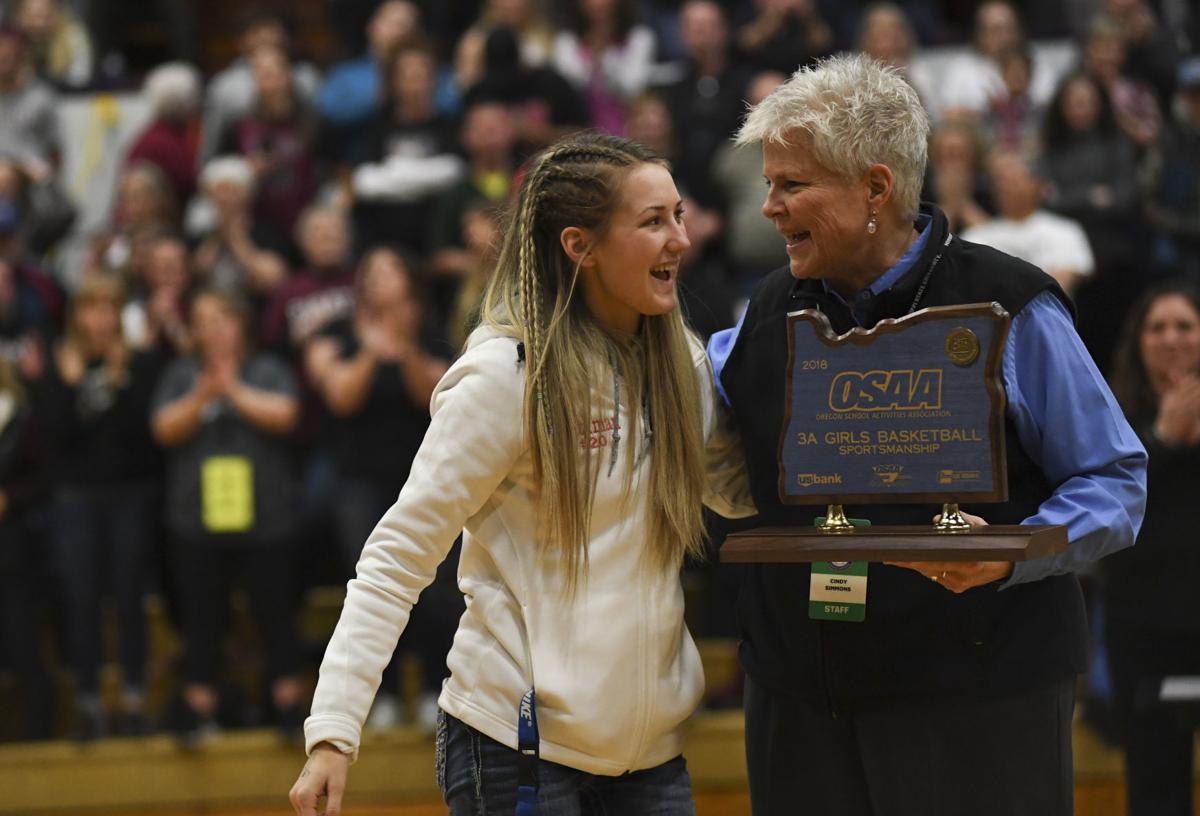 Coquille's Kyra Howard passes to a teammate during the Red Devils' win over Nyssa in the fourth-place game in the Class 3A state tournament on Saturday.

Coquille's Morgan Baird takes a shot at the basket despite defense from Nyssa's Sailor Hartley. Coquille beat the Bulldogs 36-28 to place fourth.

COOS BAY — Coquille’s girls basketball team entered state tournament week with one message: We’re not the team we were in December.

That’s the month the Red Devils had five losses. Three came against Class 4A clubs. The other two came in the Salem Academy tournament, to the top-ranked Crusaders and to Nyssa.

It’s the Nyssa loss the team said turned its season around. Coquille didn’t lose in either January or February. On Saturday, the Red Devils beat that same Nyssa squad for fourth place.

Saturday’s game was a defensive struggle as both teams tried to find their shooting touch while playing early in the morning for the second straight day.

Nyssa led 5-4 after the first quarter and 16-13 at halftime, but didn’t score in the third quarter.

Coquille wasn’t much better in the third, but got a runner by McKenna Wilson and a short jumper and two free throws from Halle Layton to go in front. Then Savannah Salazar banked in a 3-pointer to beat the third-quarter buzzer and put the Red Devils in front 22-16 heading to the fourth.

Nyssa finally got four free throws from Kierra Hernandez in the early stages of the final quarter, but they were countered by Coquille buckets from Mia Ruiz and Layton. Sierra Hartley ended the long field goal drought with a rebound basket for the Bulldogs with 3:48 to go.

That was the third of four times Nyssa pulled within four points in the final quarter, but the Bulldogs couldn’t get any closer.

“I thought we had really good looks,” Chamberlain said. “They didn’t fall.”

They even struggled at the line, making just 6 of 16 free throws after hitting 21 of their first 24 in their consolation win over Clatskanie on Friday.

Coquille wasn’t great itself, shooting 35 percent for the game, but the Red Devils had several players step up and make shots.

Ruiz hit both her shots and also came up huge on the boards with six rebounds.

“I like to talk to Mia a lot,” Dieu said. “She gets nervous. I tell her to play like she plays me in practice.”

“Mia did a fantastic job,” Coquille coach Tim GeDeros said. “She was quite the spark.”

Coquille had five turnovers in the early moments of the game, shades of that loss to Nyssa back in December, but then largely did a good job handling Nyssa’s pressure.

“We definitely battled,” Wilson said. “They came out really hard on us. They’re so quick. We had to keep our composure.”

Wilson battled with emotions after the game.

“I’m so proud,” she said of her teammates. “I feel like they are my babies. They have come such a long way.”

Wilson and fellow seniors Salazar, Josey Kaufman and Kyra Howard, as well as juniors Layton and Dieu, have been part of the Coquille squads that now have finished fourth, fifth and fifth in the past three state tournaments, the losses all coming to either Dayton or Salem Academy, who played for the title Saturday night.

Back in December, such an outcome was far from a given.

“I feel like we proved ourselves,” Wilson said. “We knew we had talent. We just didn’t know how to use it.”

Once they figured it out, the Red Devils finished 24-6, with a bright future when they drop down to Class 2A next fall.

“I’m going to be their biggest fan,” Wilson said.

Long after the fourth-place game, Coquille got a second trophy when the Red Devils received the sportsmanship award.

Also, Baird was named to the all-tournament second team.